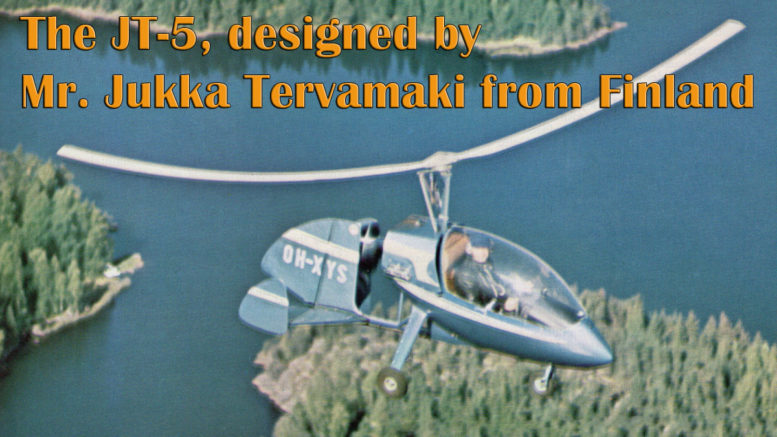 On January 7, 1973 a new autogyro, the JT-5, designed by Mr. Jukka Tervamaki from Finland, flew for the first time. An autogyro enthusiast of long standing, Tervamaki’s first machine flew in 1958 and ten years later his model ATE-3 gained a lot of interest in homebuilding circles.

Mr. Tervamaki also has been engaged in fixed wing design and reinforced plastics technology development by being the project manager of an all fiberglass glider towing aircraft, the PIK-19, for the Helsinki Technical University. This aircraft first flew in 1972.

The JT-5 is a new rotary winged aircraft that could be described as a “state-of-the-art” glass ‘copter since most of its basic structure and main components are made of glass reinforced epoxy resin. GRP components in JT-5 autogyro are as follows:

The rest of the load carrying structure is made of welded, streamlined 4130 steel tubing. The machine includes a fully enclosed cockpit with complete instrumentation and other features very seldom found in homebuilt rotorcraft designs.

Special attention was paid to the static and dynamic stability of the machine by using a large size, “Lockheed Constellation type” horizontal stabilizer and triple vertical surfaces in the tail.

Normally these features are lacking in homebuilt gyroplanes which have been found to be a contributing factor to many fatal accidents caused by the so called “porpoising”, an uncontrolled flying maneuver which may happen to an inexperienced pilot in turbulent flying conditions.

For pilot comfort the JT-5 cockpit and pilot’s seat were designed to the same standard which is found in the best high performance sailplanes of today.

All controls are located for easy handling, rudder pedals are adjustable to suit the pilot’s size and engine noise is reduced to a comfortable level by a big muffler, low tip speed propeller and a carefully isolated firewall behind the pilot.

The exhaust is directed upwards to prevent even the remaining engine noise to spread over the noise sensitive surroundings and suburbs of Helsinki near Malmi airport, the usual home base of the JT-5. (There is a citizen’s movement to drive away the Malmi general aviation airport, Finland’s busiest, and replace it with a residential area).

The JT-5 is powered by a Limbach Motorenbau (W. Germany) converted 1700ccm VW-engine with Scintilla Vertex magneto. I designed the intake manifold, carburetor installation and exhaust system to suit the special needs of the JT-5 design. The engine produces about 75 to 80 hp at 3800 rpm.

A closer look at the carburetor installation will reveal some new ideas in the VW engine conversion field. At first I tried a Tillotson HD carburetor, but it gave poor middle rpm range whatever the screw settings were for main jet needles, and the Tillotson factory refused to give any assistance in this special installation.

However, by a stroke of good luck I discovered in the local Solex dealer’s stock a truly simple, easily adjustable and reliable unit, a Solex 35 RH carburetor which is both float-less and diaphragm-less!!

The engine fuel pump simply fills the carburetor with fuel, the unused amount being drained back to the tank which must be at least 15 cm under the carburetor (and is 35 cm in the JT-5). 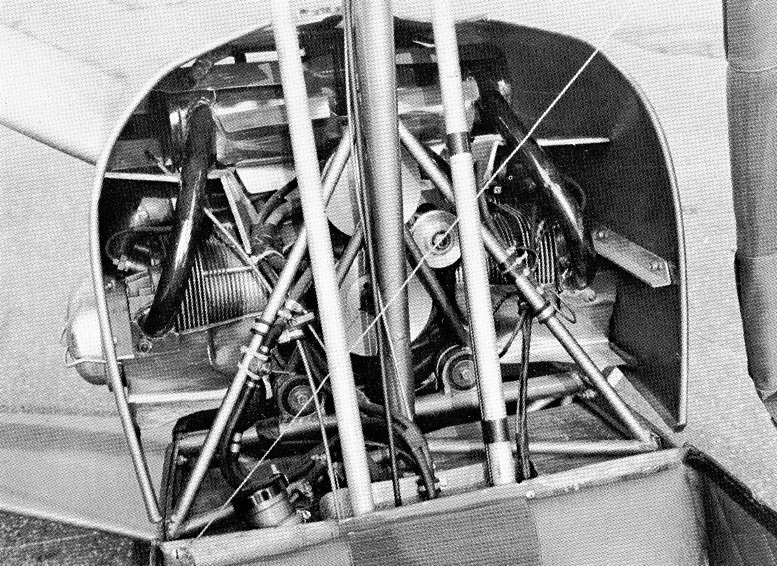 The JT-5 engine compartment as viewed from the cockpit.

The level of the fuel in the carburetor is determined by the drain pipe upper end in the fuel chamber. All parts of the Solex 35 RH can be removed and replaced by under or over size items.

Thus, during the engine test runs of the JT-5 practically all carburetor components were replaced several times until the highest power, smoothest running and proper mixtures were found at all speeds.

A truly magic tool in this process was the Colortune II spark plug made of glass so as to see the color of the burning mixture in the cylinder . . . a cheap and handy item to be recommended to any homebuilder struggling with mixture adjustment problems.

Being the designer-builder-pilot-mechanic for the JT-5, I designed the machine with special attention paid to the maintainability of all components.

Therefore, I arranged the instrument panel cover to open together with the canopy to expose the panel back side and instruments, plus rudder pedals and nose wheel steering for pre-flight check and all necessary maintenance inspections.

This is an idea actually stolen from the German Standard Cirrus sailplane. However, there is a further extension of this idea in the JT-5 which is truly original.

The pilot seat back which also forms the firewall between engine compartment and cockpit opens as well with the canopy to expose the whole engine front side — including the rotor prerotator — for routine inspections and maintenance.

The fuel tank filling cap, fuel quantity indicator transmitter and engine primer pump are also located behind this firewall. The gas truck driver certainly is surprised at first try . . . walking around the machine for refueling and finding no place to stick the hose!

The open back side of the engine is maintained just as easily. It is possible to add oil to the engine, adjust magneto timing and carburetor idle screws, plus replace carburetor main jets without removing the one piece engine cowling.

The same applies to valve adjustment because the rocker box covers can be removed without touching the cowling. First flights of the JT-5 proved that the design goal of a speedy, comfortable and stable autogyro had been achieved.

Because the Finnish weather is cold and rainy and days pretty short in January, the test flight program can only be advanced rather slowly. However, some performance figures can be confirmed at the present stage of development:

The empty weight of the machine is 167 kg., the gross weight being 290 kg. Capacity of the integral fuel tank in the fuselage is 40 liters, giving a range of about 250 km. Stability, maneuverability and handling qualities of the machine are excellent.

To give some test figures for comparison to other rotorcraft enthusiasts, the propeller static thrust at full throttle is 132 kp at 3400 rpm. At top speed the engine accelerates to about 3800 fpm which at the JT-5 propeller pitch p/D- 0.67 (blade tip pitch 12 degrees) would give a maximum theoretical speed of about 190 kmh, at which point the propeller would give zero thrust.

Since 150 kmh is achieved, this tells a lot about the low drag of the sleek JT-5 fuselage. The rotor system of the JT-5 has been developed further from my earlier design, the ATE-3 autogyro from 1968.

Rotor diameter is 7 meters, blade chord 18 cm and the airfoil section is the NACA 8-H-12. A new blade root-to-rotor-hub fitting was designed for lesser drag than in the ATE-3. Actually, I had a simple application of De La Cierva’s inclined drag hinge already on the drawing board. 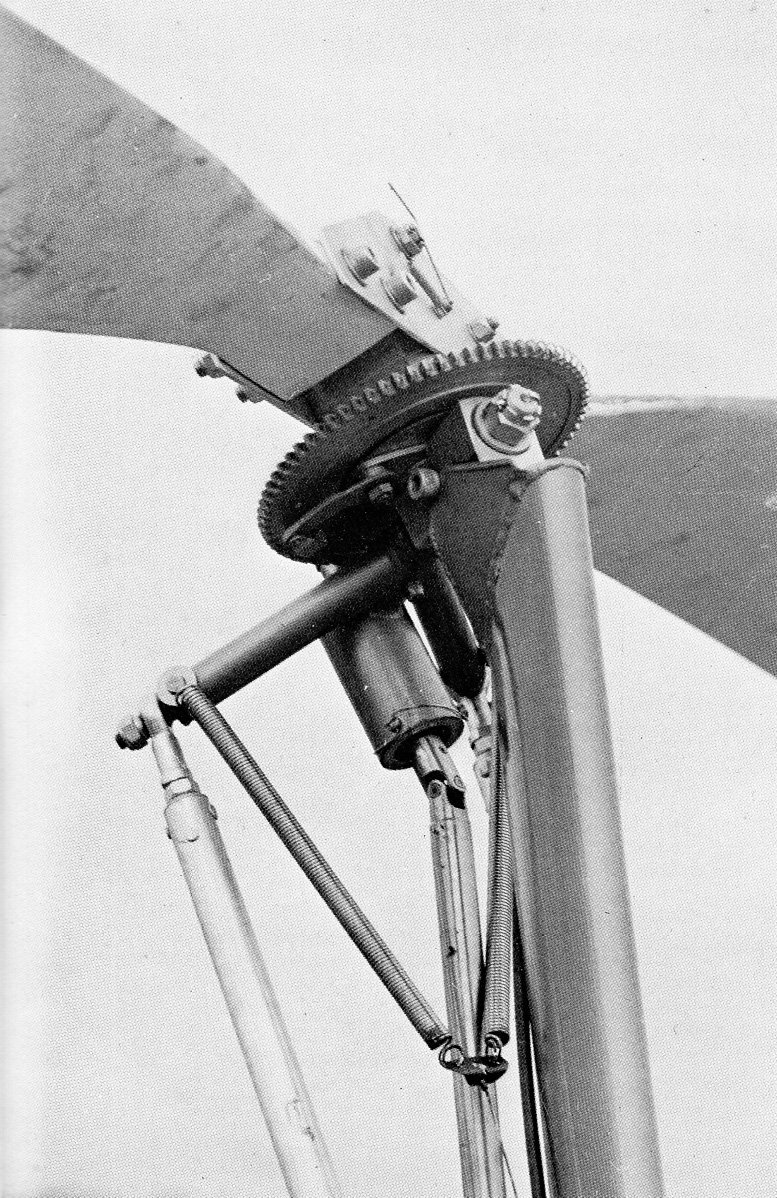 Details of the JT-5’s rotor head.

This design would allow the blades to move to zero pitch when the prerotation torque is applied, resulting in an increase of an additional 100 rpm to the rotor pre-spin speed — and in a very short take off distance.

However, having a lot of runway on the Malmi airport for the JT-5, I put this design aside for possible future use . . . the prerotation system of the JT-5 is efficient enough anyway.

A rpm of over 300 can be achieved statically by the 5 horsepower transmitted to the rotor via a V-belt drive/clutch, a 90 degree gearbox, a sliding universal shaft and a Bendix unit in the rotor head. To stop the rotor after each flight, a rotor brake is fitted in the rotor head — the brake lever being installed in the control stick.

Trim adjustment is also arranged in the control stick and is operated by twisting the grip handle. For simplicity all instruments in the machine are mechanical; there is no electric system in the machine (alternator, relays, etc.) except the ignition system.

The mechanical instruments are as follows:

To prevent carburetor icing, a simple carburetor heating system has been installed. There are provisions to also install a cabin heater, if found necessary. The flights which have been made in temperature conditions of about -5 to -10 degrees centigrade indicate no difficulties of frost in the canopy.

This was achieved with an efficient ventilation system. If the pilot wears normal Finnish style winter clothing, he will not feel cold with ventilation on for up to 20-30 minutes of flight.

The design, development and construction work spent on the JT-5 total about 2000 man hours and required 3 years of the builder’s spare time to complete. A great help for the project was the Finnish Technical Foundation which gave funds for the development work.

Of major importance also was the fine craftsmanship in the rotor head components made by the machinery shop of Wihuri-Yjtyma OY Lentohuolto, a Cessna, Continental and King distributor for Finland for which company the author works as a technical manager.

This company also is famous for its Fincraft airplane skis and its specialized work with aircraft floats, Robertson STOL-equipment and Bell helicopters.

Of major interest to other gyroplane builders would be the news that the drawings of the JT-5 are now immediately available from the author for $60.00, plus postage (1974). The fine glass fiber rotor blades of the ATE-3 and now of the JT-5 have been available for years.

However, having the JT-6 already in mind, I realized I would not have time enough to increase the blade production or to start producing complete kits of the JT-5. Therefore, the decision has been made to sell the complete project, with prototype and production rights, to Mr. Vittorio Mani of Samarate, Italy.

So, sooner or later, rotor blades, kits and complete machined assemblies will be available from Italy for all gyronauts wishing to have the best of them all. 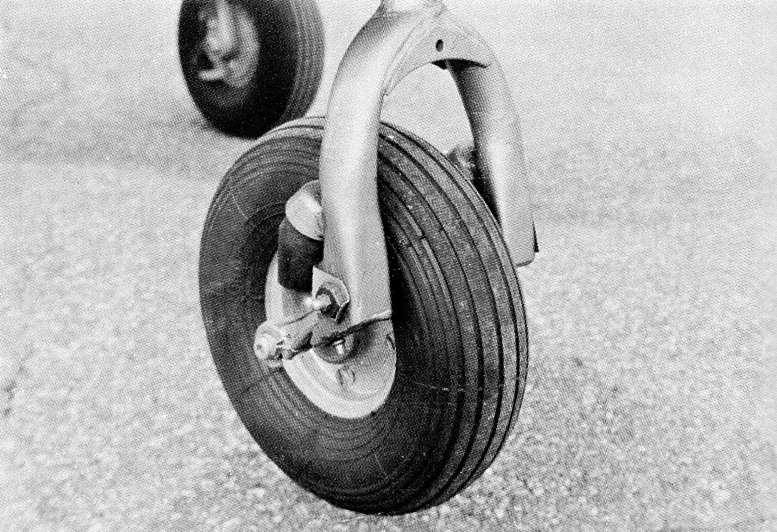 The rotor mast is made of streamlined steel tubing of SAE 4130 quality. Rotor tachometer is made from a German VDO automotive speed indicator and is driven mechanically via a flexible shaft from the rotor head.

The rotor head is of a compact offset-gimbal type. with centrifugal teeter stops and with a rotor brake installed. There are two spiral springs for trim adjustment which is operated by the control stick twist grip handle.

Normal rotor RPM is 400 with a maximum value of 600 RPM. Several blade sets have been tested up to 16-20 tons of static tensile strength, the maximum centrifugal load being about 5 tons at 600 RPM in a 3 G pull maneuver.

ROTOR DRIVE: Rotor pre-rotation system consists of a Vee-belt clutch, 90 degree gear box, sliding universal shaft and an inertia operated bendix drive. Overall reduction ratio is 8:1. A rotor spin-up of 300 RPM can be achieved. The prerotation lever is pivoted to the throttle lever for simultaneous use by the pilot’s left hand.

VW installation on the JT-5 gyroplane.

For easy maintenance and preflight checks, the instrument panel cover and pilot seat back, which also forms a firewall to the engine compartment, open together with the canopy. Most of the routine inspections and maintenance operations can be performed without removing the one piece, aluminum engine cowling.

All tail surfaces are attached to the fuselage by a single steel tube, which is streamlined like all other fuselage tubes exposed to the airstream. A small tail wheel is located beneath the base of the fin.

POWERPLANT: One 1700 ccm VW-engine of 75 hp, converted for gyro use by Limbach Motorenbau of Sassenberg, W. Germany. Carburetor installation, exhaust system with a muffler above the engine and carburetor heating system designed by Tervamaki. 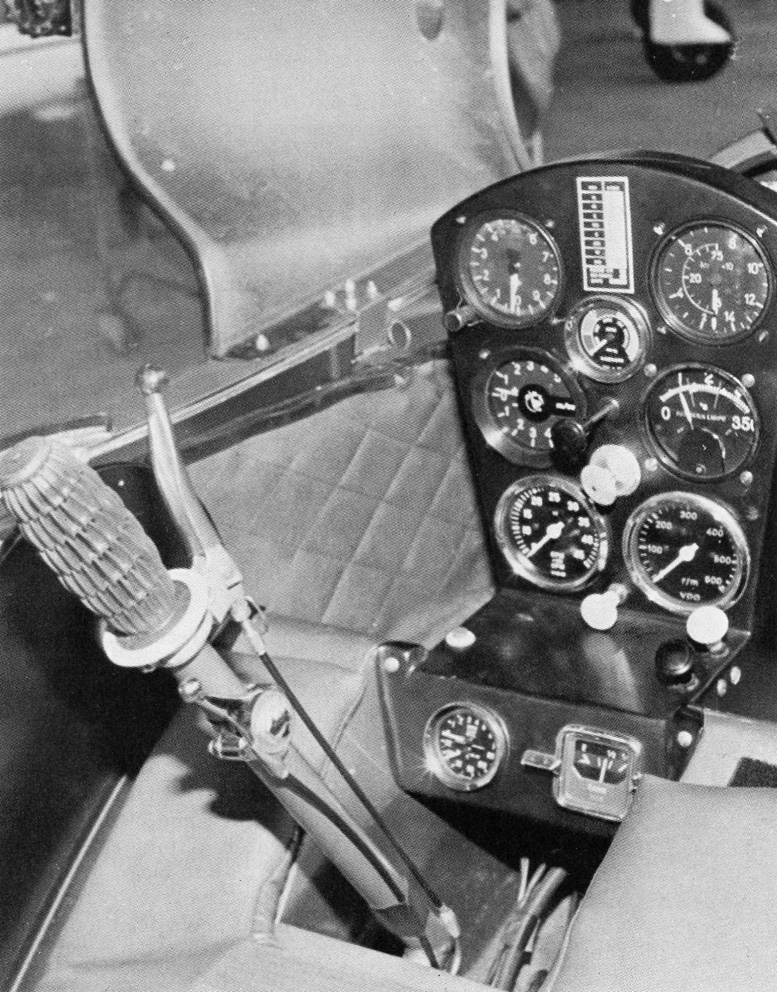 JT-5 cockpit details. The big lever on the stick is a rotor brake – a nice finishing touch to be able to control the slowing of your rotorblade for a safe taxi and exit. 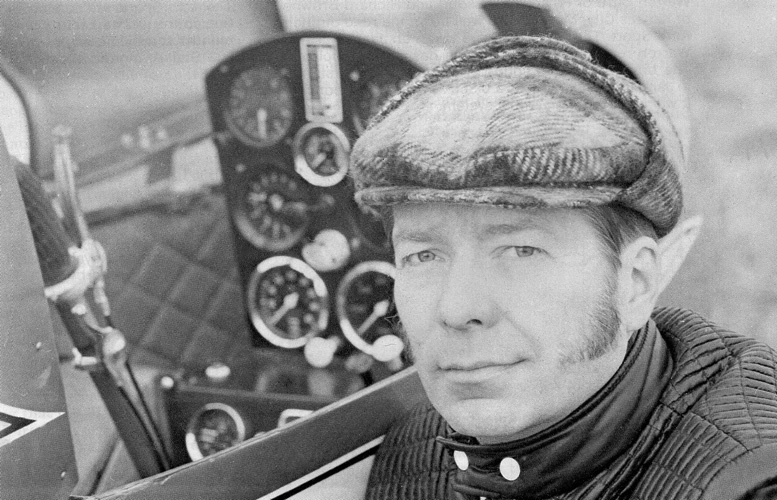