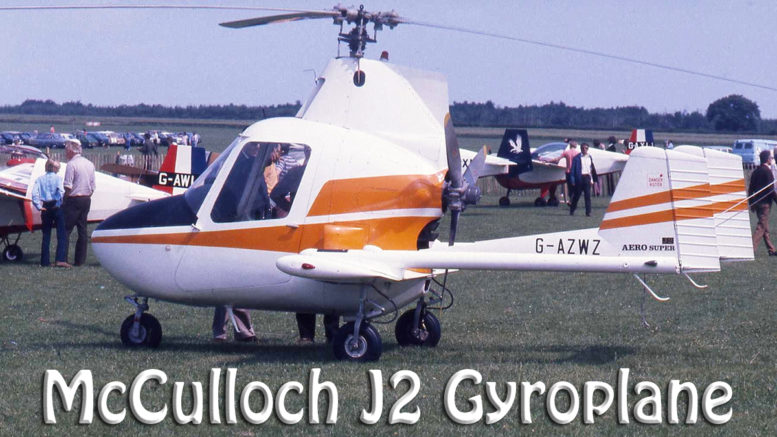 One car in every garage (let alone two) once was a dream: it has long been a reality.

One airplane in every garage, however, has stayed a dream, chiefly because a 2000-foot runway won’t fit on the average house lot. It’s even a chore to fit one anywhere inside the limits of an average city.

Now the McCulloch Aircraft Corporation is striking a blow for freedom — freedom from runways — with the J-2 Gyroplane, an ultra-modern development of one of aviation’s safest flight devices, the unpowered rotor.

For $15,950 McCulloch will sell you a two-place, 120-mph aircraft with 300-mile range, a useful load of 550 pounds and the ability to take off or land from practically any little patch of open ground.

You can, in fact, jump it off straight up for a few feet, but if you can afford to squander 40 feet for a takeoff run you’ll reach an indicated airspeed of about 20 mph, and the manufacturer likes this lift-off procedure better. 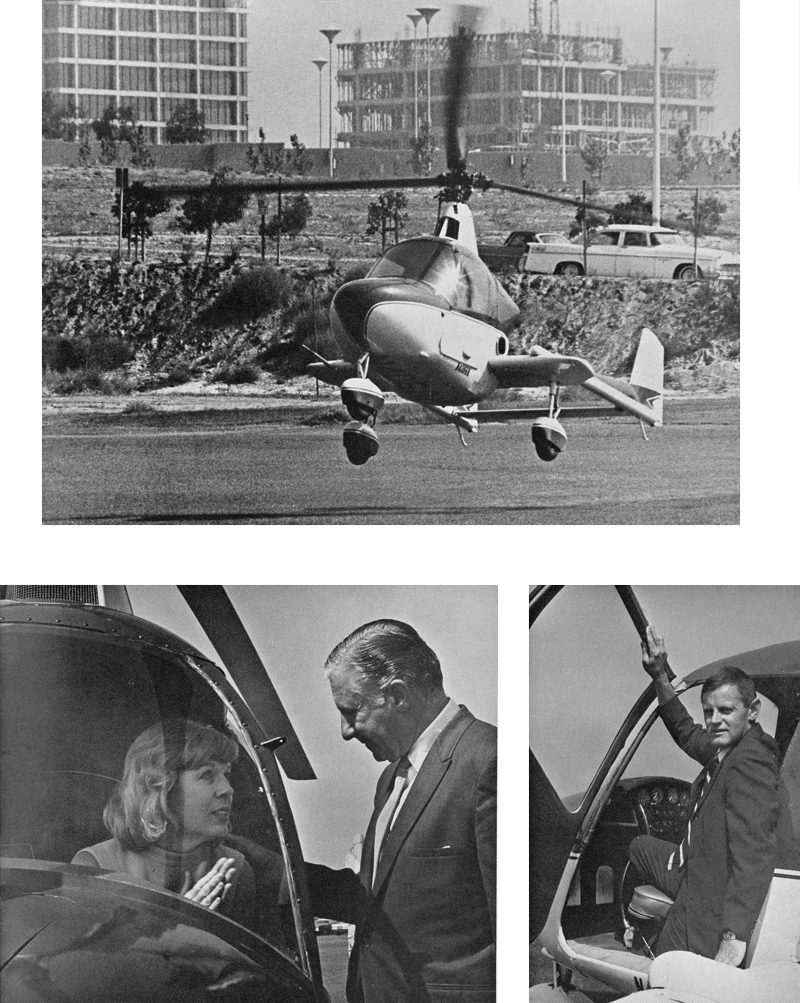 Powered by a Lycoming 0-360 engine of 180-hp driving a pusher propeller, a J-2 Gyroplane gets its lift from a three-bladed rotor which is revolved by slipstream as the air-craft moves forward through the air.

Except when the rotor is being brought up to speed prior to takeoff, no engine power is applied to it. The control stick is used to change blade pitch for directional control.

The Gyroplane’s low cost, compared to helicopters, was achieved by eliminating the complex transmission, gear boxes and tail rotor necessary to apply power to the main rotor and counteract torque. In addition to high initial cost, these features also contribute to a helicopter’s high maintenance cost.

The J-2 is the latest in a long line of rotorcraft developed by pioneer designer Drago K. Jovanovich. McCulloch calls it a “second generation” gyro, a follow-on to the successful Kellett and Pitcairn autogyros of the Thirties.

Lawrence Mattera, president of McCulloch Aircraft Corp., says it is “considerably safer than a single-engine fixed-wing STOL aircraft since it is virtually stall-proof, maintains full control at all flight speeds and merely settles to the earth in autorotation in case of power failure.”

Mattera says a non-pilot can earn a gyroplane license in the same time it would take to get a fixed-wing license, and that rated private or commercial pilots can qualify for a gyro rating after 15 hours of dual and five of solo flight.

The technique of flying the J-2 is similar to that of a fixed-wing aircraft. After engine start, a lever by the left side of the pilot’s seat is depressed to transfer engine power to the rotor via V-belts.

When the rotor is turning at 520 rpm or slightly more, the lever is released, which disconnects engine and rotor and places the blades in the pitch angle for flight.

The pilot releases the brakes, and after a ground roll of 40-50 feet or less on a no-wind day, the machine breaks ground. It will clear a 50-foot obstacle in 300 feet, and climbs at 1000 fpm. Landing approach and touch-down speed is 28 mph, or less if you need it.

In flight, the pilot controls pitch and roll with conventional movements of a control stick, and pedals operate twin rudders. There is no collective pitch stick as in helicopters, though the lever used to bring the rotor up to speed before takeoff is located where a collective usually is carried.

McCulloch’s test pilot, Jim Reichert, said one of the notable things about the aircraft is that control response about all axes is “practically the same” at minimum takeoff and landing speeds as it is in cruise. He said climb, cruise, maneuvering and descent attitude changes are small, and visibility is good in any maneuver. 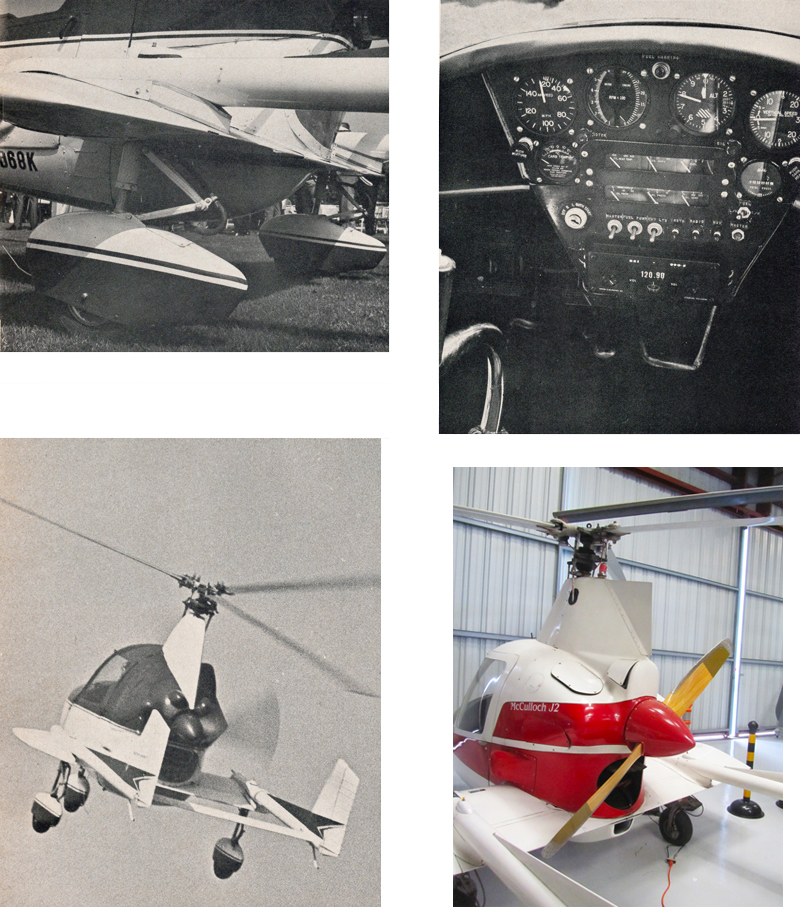 TOP LEFT: Gear has long-throw oleo struts and neat pants. Ship taxis and steers surprisingly well on the ground.
TOP RIGHT: Control stick is handled as & normal light plane stick, and the panel will leave fixed-wing pilots right at home.
BOTTOM LEFT: A rate of climb of WOO fpm allows the perky little J-2 to hoist itself out of fields in confined quarters.
BOTTOM RIGHT: A piece of gyroplane history preserved in a museum.

“Also,” he noted, “due to the high control response and damping effect of the rotor, crosswind effects do not disturb the pilot as they would in a fixed-wing aircraft.” With practically any parking lot, dirt road or hillside pea patch qualifying as a Gyroport, the prospects of the J-2 as a family fun plane and sportsman’s flivver are interesting.

Utility uses such as aerial application, pipeline and powerline patrol, ranch work and the like may make promising markets. And those backwoods hunting and fishing camps may become accessible to a J-2 pilot even though they’re miles from a fixed-wing field.

The limited useful load of the J-2 (two 170-pound adults, 26 gallons and 50 pounds or so of luggage) is already being remedied: design work is well under way on a four-place version, though it is “a couple of years down the road yet” according to company spokesmen. Mattera reported production of the J-2 will begin during 1968 with first deliveries scheduled for January, 1969. 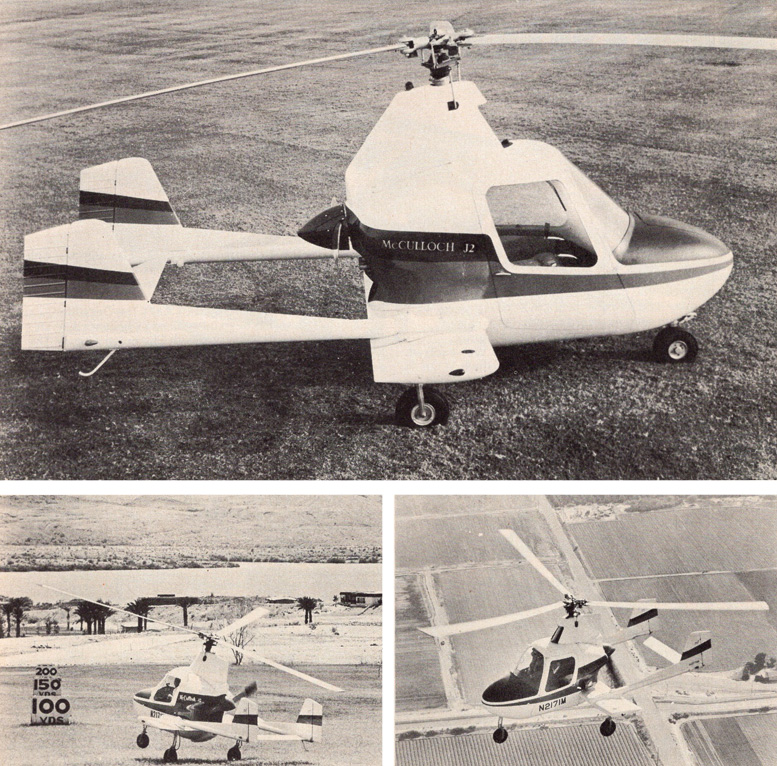 He said the first six months’ production is pre-sold. For the personal user, an aircraft that will cruise at 120 mph, operate from extremely small fields and maintain safe, fully-controlled flight at under 30 mph offers numerous interesting possibilities.

Consider the advantages, for example, of being able to live 50 miles from the big city along some quiet river or lake, with a hundred feet or so of grass in the back yard for a landing strip. Five days a week, rain or shine, you hop into your Gyroplane and commute.

McCulloch Aircraft started 1971 in a new plant at Lake Havasu City, Arizona, where production of its J-2 gyroplane was moved from El Segundo, California. First delivery of a two-place J-2 was made in mid-November to Belair Aviation, Long Beach, California.

A nationwide dealer network is being established. Combining some capabilities of a helicopter and a fixed-wing plane, the J-2 has a free-wheeling rotor instead of a wing and a 180-hp Lycoming pusher engine in the fuselage rear.

The FAA certificated it last May. “Any open field, parking lot, or dirt trail becomes a potential airport for the J-2,” Lawrence C. Mattera, McCulloch president, said. Priced at $19,950 at the factory, it’s the first production autogyro in 30 years.

If the weather is poor you can come down to minimum height and buzz along slowly enough to see and avoid obstacles. When you reach the office, land on the company parking lot or even the roof, if the management has been foresighted enough to install a heliport.

The safety of the gyro concept has been heavily stressed by McCulloch. Mattera notes that in helicopters great twisting force is applied to the rotor shaft, and driven outward through the blades. 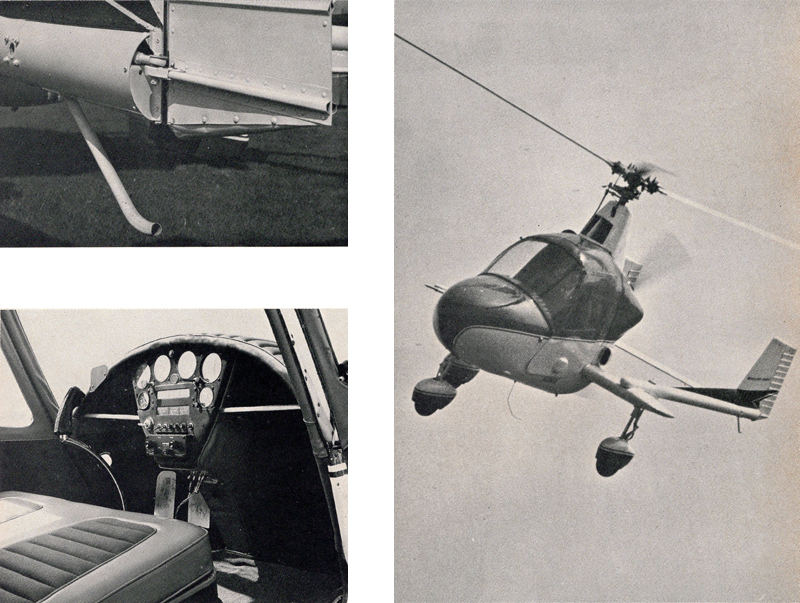 In addition, engine firing stresses are transmitted to the rotor. In the J-2, the rotor head is essentially a well-proven helicopter design, but it is “loafing:” no power is driving it, and the turning force of the slip-stream moves inward along the bonded metal blades, not outward.

“We’ve licked the helicopter’s biggest vibration problem by leaving out the parts that cause it,” Mattera said. He noted that the J-2’s rotor blades, which are the control as well as the lift-producing surfaces, are always turning at rated rpm, even during takeoff and autorotation.

This eliminates the “mushiness” sometimes encountered in fixed-wing aircraft controls at low airspeeds. Robert P. McCulloch, chairman of the board of McCulloch Aircraft and head of the industrial group that manufactures McCulloch engines, calls the J-2 “the culmination of a dream.”

McCulloch recently acquired a substantial interest in Jovanovich’s Jovair Corporation, through which the designer was developing the aircraft, after the project was dropped by Lear in the wake of financial troubles encountered in the Learjet program.

The name of the firm was changed to McCulloch Aviation, and production was moved into expanded facilities in El Segundo, California. Additional production facilities are planned at Lake Havasu City, Arizona. McCulloch also is the developer of that Colorado River community. 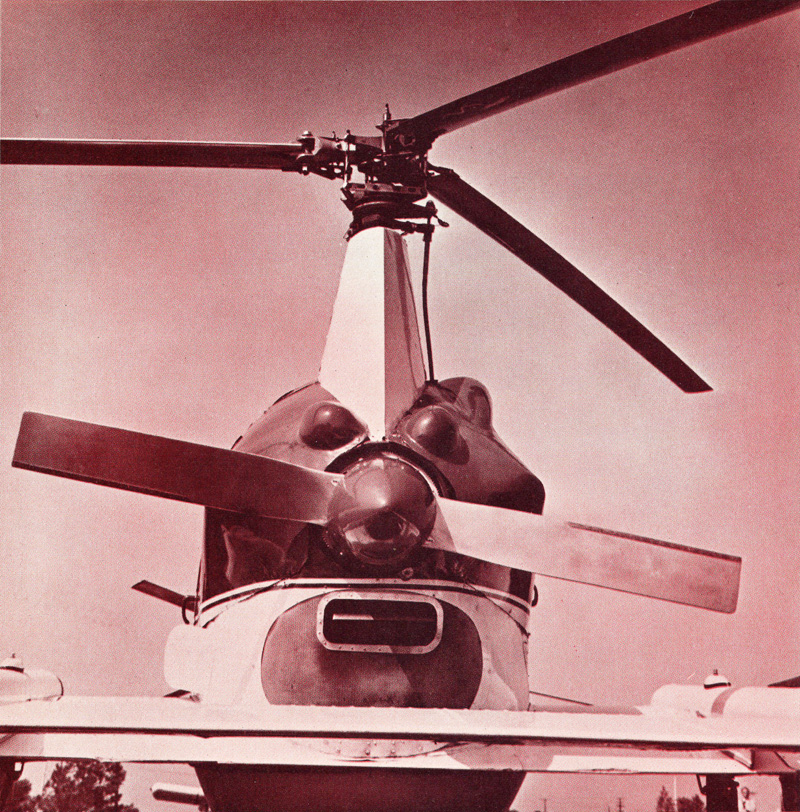 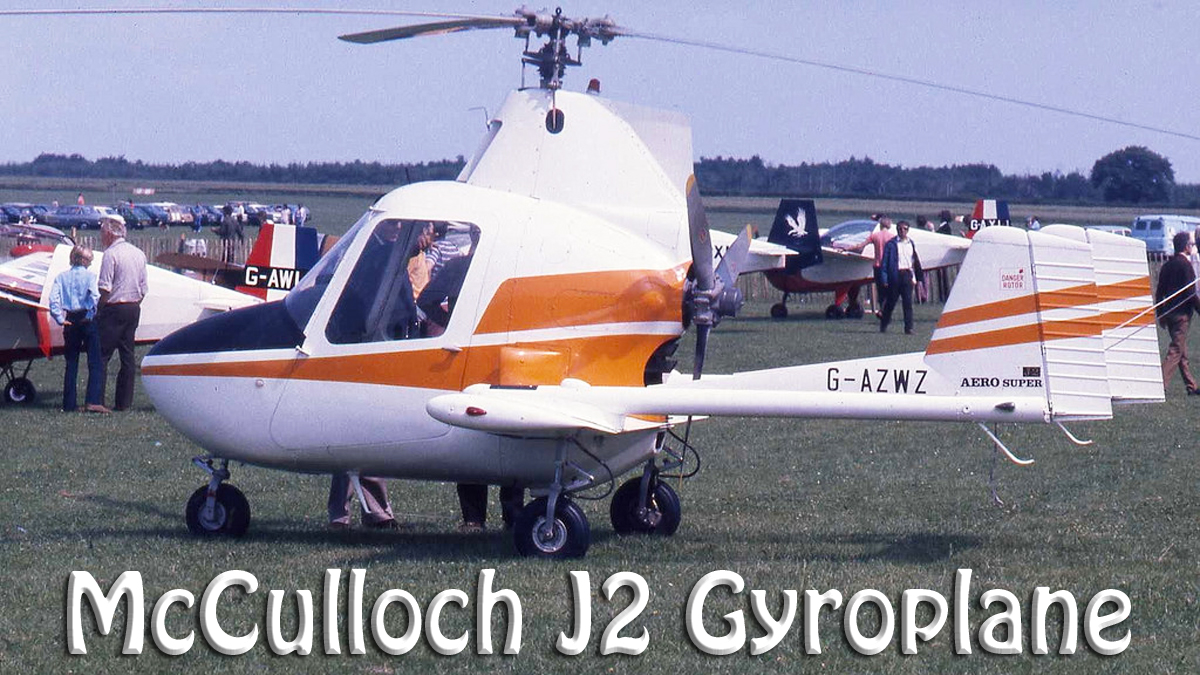