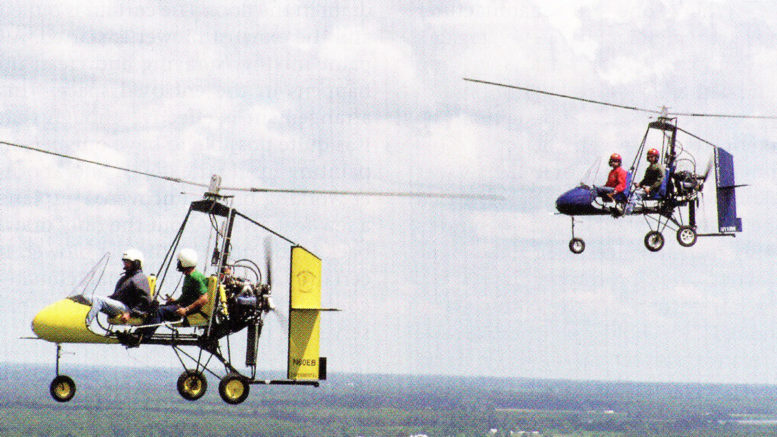 Up front, I’ll admit that the Dominator Gyrocopter from Rotor Flight Dynamics (RFD) is the two-place machine that beckoned most after my introduction to the world of gyroplanes. In a world where form should always follow function, the Dominator just looked right.

My dream was not in vain, and neither was my meeting with the opinionated designer of the Dominator Gyrocopter — Ernie Boyette. With years of successful designs, beginning in 1986 when he joined business partner Chuck Beatty in Tampa, Florida, and 7000 hours of gyro time (much of it instructing), Boyette is a man worth listening to.

He claims, however, that Beatty is the world authority on gyros with his wall full of credentials including that of physicist. Boyette says he’s nothing but a shade-tree mechanic with building intuition — yet when he combines his theories with Beatty’s, the result is the creation of successful machines.

Crashes of Air Command gyroplanes in the 1980s were eventually attributed to the thrust-over-drag phenomenon (when the thrust line is above the drag vector and the application of power causes the nose to pitch down and reduction of power makes the nose pitch up, as opposed to most aircraft), and the RFD team set out to solve the problem.

Discussion has dominated the industry concerning centerline thrust as a means of overcoming pilot-induced oscillation (PIO), which leads to a bunting action and a resulting negative angle of attack that creates flow downwards in the disk and causes the gyroplane to tumble out of control.

Different manufacturers have different solutions to this problem — RFD has simply avoided it from the beginning with designs that place the horizontal stabilizer directly in line with the center of the propeller hub. 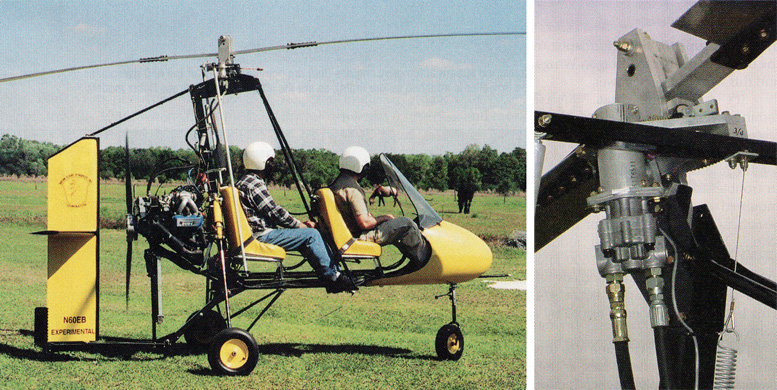 LEFT: The author (front seat) and Ernie Boyette enjoy the scenery as they prepare to launch the Subaru-powered tandem Dominator.
RIGHT: A two-bearing rotor head is one of RFD’s innovations; Dragon Wings rotor blades are another. The blades are popular with other gyroplane manufacturers as well due to their aerodynamically refined shape, which incorporates span-wise twist to reduce drag and increase performance.

Tall vertical rudder/stabilizers are also in line with the hub’s center where they can maximize the propeller’s thrust for stability and control. The tall vertical stabilizer cancels P factor, as thrust is equal on both sides of the fin. Boyette claims a takeoff is possible with your feet off the pedals if there are no crosswind conditions.

When RFD first introduced its revolutionary gyroplane in 1988, “we just about got laughed off the field” Boyette said. However, his low passes along the flight line, where he pumped the cyclic full aft and then full forward without losing control, quickly impressed onlookers.

As the story goes, Igor Benson, the father of the Gyrocopter, said at the time: “I approve.” Boyette estimates that more than 200 Dominators are now flying worldwide.

RFD’s gyroplanes share common design concepts that make a lot of sense. These include large tires and shock absorption systems with 9 inches of travel in the mains and 5 inches on the nosegear to tame rough paddocks and firm arrivals.

Boyette claims this gear is the answer to the “stop-and-drop” landings that sometimes occur when gyro pilots try to touch down with inadequate rotor inertia. This capability is also handy on emergency landings in rough terrain because the suspension will conform to the topography, reducing the likelihood of rollover.

Differential brakes and a castoring nosewheel allow the gyroplane to be landed in crosswinds without risk of careening off the runway due to a canted nosewheel. These features also make for a small turning radius, which means sharp maneuvering in crowded ramp areas.

RFD’s Dragon Wings rotor blades are in demand with other gyroplane manufacturers because of their aerodynamic refinement — a span-wise twist help to reduce drag and increase performance. With more than 1100 rotor sets sold to companies such as Air Command International and Little Wing Autygyro, RFD is the leader in production and development of gyroplane rotors.

After having flown a half dozen training gyros, it was obvious to me that the Dominator Gyrocopter was superior in performance to the others thanks to the Dragon Wings, and this wit h less horsepower.

It’s significant that Boyette mounts every set of blades he manufactures on his own gyroplane for testing, balancing and tracking before sending them to a customer. This helps in troubleshooting after the blades are mounted on a customer’s aircraft.

A testament to the efficiency of Dragon Wings blades is the world altitude record for gyroplanes under 500 kilograms—24,463 feet, set in Florida by Bill Clem with a turbocharged Rotax 914. This bettered the previous record by a vertical mile.

RFD’s tandem trainer is powered by a converted Subaru auto engine and produces 105 hp, making it one of the smallest engines currently operating in a two-place gyroplane. A hydraulic pre-rotator, coupled to the diminutive four-cylinder engine, enables spooling up the rotor disk to 50% of the normal blade speed.

Hydraulic systems allow more horsepower to be transmitted to the rotor disk and are more durable than the friction wheels typically used on other gyros, Boyette says. Although the RFD blades are long, their lightweight aluminum construction results in operating weights that are less than half the competition’s.

RFD’s models include the single-seat gyro (left) and the two-place, Subaru-powered tandem-seat Dominator, which the author flew during demonstration flights.

While blade weight is often associated with autorotational inertia, Boyette increases this energy by putting small brass weights in the blade tips where the inertia is multiplied by the lengthy moment arm into more kinetic energy than other blades have.

Numerous power-off landings confirmed the excellent autorotational energy. One edge of each Dragon Wings rotor blade has a 6°, non-linear twist with the outboard section at a higher pitch angle.

This allows the gyroplane to fly at higher speeds because it delays the onset of rotating blade stall, a factor that limits the cruise speeds of similar aircraft (and helicopters, for that matter). Clem has exceeded 130 mph in his Dominator, Boyette says.

Another of RFD’s inventions is the two-bearing rotor head, which replaces bushings with needle rollers to relieve the coning stresses that have caused failures in many gyros at about 300 hours of flight time.

To minimize potential rotor head damage, Boyette employs various techniques including a slide to allow some fore and aft rotor head motion to relieve stresses on the mast, a teeter bolt to allow some sideways rotor motion and a hydraulic damper that will not allow sudden motions that could harm the systems.

The company also has its own version of the bifilar “tuned damper” found on late model helicopters. In RFD’s installation, a fiberglass rod with a sliding weight allows Boyette to “tune” the rotor blade to minimize the feedback associated with the natural frequency of the rotor disk.

Boyette’s tandem is outfitted with an Engine Information System (EIS) that confirmed the Subaru’s burst into life and all parameters. As the rotors spooled up and we taxied in the 15-mph crosswind toward Boyette’s into-the-wind grass strip, the ground handling was precise with differential breaking, and the shock absorption of the gear was superb.

Turning into the flow at the runway’s threshold, Boyette engaged the pre-rotator while applying takeoff power, and we were airborne in roughly 500 feet. Directional and pitch control were excellent, and we accelerated in ground effect to 60 mph, initiating a steep and sustainable climb that exceeded 500 fpm.

Visibility was excellent up front and down below as Boyette, at 800 feet, demonstrated steep banks with extremely high turn rates. These were more aggressive than I have witnessed in the six two-place gyros I had previously flown, and they really captured my attention.

Moments later I assumed control and found that level flight was easily accomplished, as were balanced turns. The natural stability of the Dominator Gyrocopter with the centerline thrust is readily apparent and a joy, unlike some other gyroplane flights during which I had to constantly make “corrections” in turbulence—often leading to the need to correct for the corrections.

Converted Subaru automotive engines (right) are popular options for the RFD gyroplanes (don’t worry – the propeller is attached before flight), as are the ubiquitous four-stroke Rotax models.

The many gyro pilots who have experienced that situation know how challenging and fatiguing this phenomenon can be. With the Dominator, pilots can concentrate on the view and let the gyro handle cruise flight at 75-80 mph with a fuel flow of 5-6 gph. It will go a lot faster, but who’s in a rush?

On one of these, I got a little slow in the flare and dropped the Dominator Gyrocopter in from about 1 foot. The shock absorption was so good that it made the landing seem quite reasonable.

During a demo flight in another gyroplane a few days earlier, my demo pilot dropped his prototype in when he was gusted in a crosswind—it jarred our teeth. Not so with the Dominator Gyrocopter.

Crosswinds posed no problems thanks to the castoring nosegear. Pilots will never experience that lurch that occurs in other gyros during touchdown when the direct connection to the rudder cants them into the wind.

Overall? The Dominator was a gyroplane I could get used to flying on an everyday basis.

Now that we’re getting into the real cold months of winter, when flying activity is at a minimum here in the northern states and Canada, some tips by Gerry Spurrell are particularly timely During the cold weather months, many aircraft are parked and seldom if ever flown until the weather breaks into warmer temperatures.

Consequently, many mechanics and pilots have mixed emotions about allowing an engine to rest for extended periods without running or flying the engine. One engine manufacturer has found that rust occurs and engines flown infrequently may not reach the expected overhaul life.

According to Lycoming, more harm than good is done to an engine when it is merely “ground run” for a brief warm-up. If oil TEMPERATURE isn’t brought up to 75 DEGREES C, water from combustion will accumulate in the oil.

It will then gradually turn to acid. Other than that condition, ground running may cause hot spots in cylinders or bake ignition harnesses due to inadequate cooling. Brittle oil seals can cause leaks, too! Flying the engine around the field will raise the oil temperature high enough to vaporize and eliminate water.

But if the engine can’t be flown pull it through by hand or crank it briefly with the starter. It is strongly recommended that an infrequently flown engine should HAVE AN OIL CHANGE EVERY 25 HOURS to eliminate water and acids. An engine in prolonged storage should be preserved.