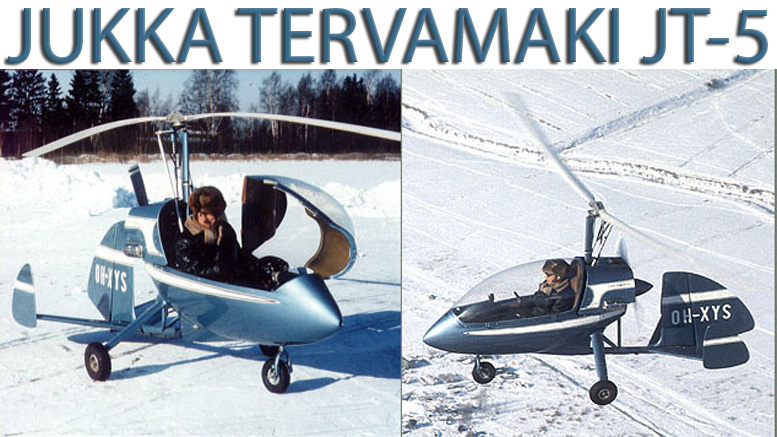 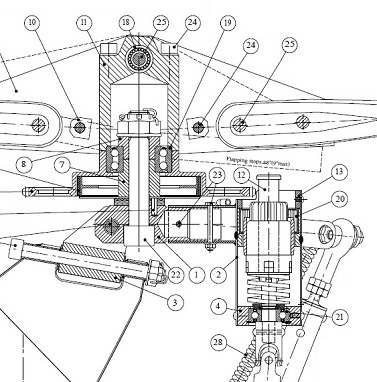 MAYBE IT’S THE weather in Finland A country with no coal or oil and long, severe winters. Finland is a nation of beautiful forests and lakes, abounding in wild game and fish.

It’s a place to fly low and slow in a comfy rotorcraft fitted with a warm, streamlined cockpit from which to view the beautiful countryside. At any rate, when Jukka Tervamaki designed his JT-5 autogyro, that’s what emerged — a thoroughly beautiful machine of glass, well adapted to flight over a land where reindeer, swans, geese, bear, wolves and lynx play.

Tervamaki already was deeply interested in gyroplanes when he worked briefly for Dr Igor Bensen in the United States 20 years ago and later obtained his diploma in Aeronautical Engineering from the Helsinki Institute of Technology in 1963, before serving with the helicopter section of the Finnish Air Force.

Later on, he went into design and production of powered sailplanes and designed the engine installation for his JT-6, now in production as the PIK-20E Motorglider.

It’s no secret that European sailplane makers were far ahead of fiberglass homebuilt makers in the United States, where composite craft like the KR-1 and KR-2 and the VariEze and the Quickie have adapted the glass-reinforced epoxy resin techniques. 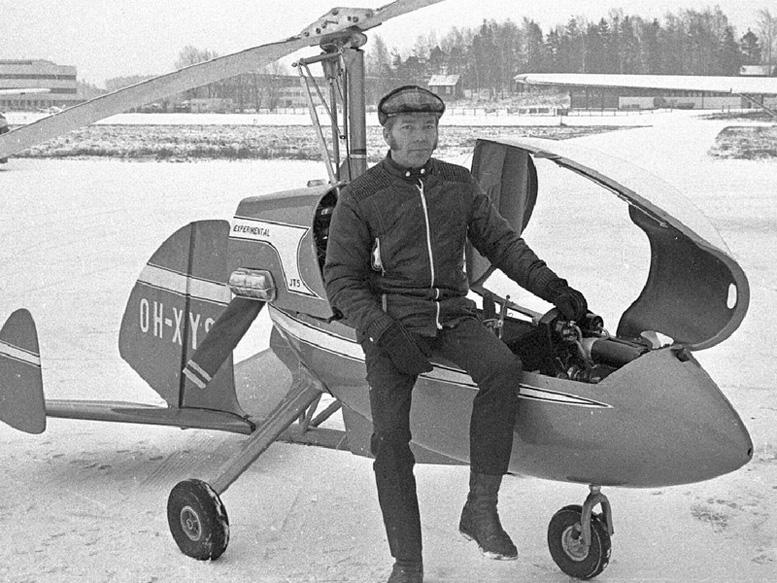 While the framework of the load carrying structure of the JT-5 Autogyro is made of welded 4130 steel tubing, the cockpit area, canopy and tail feathers are all “glass.” A large horizontal stabilizer and triple vertical surfaces were designed to eliminate the danger of porpoising by providing dynamic and static stability.

The fin and rudder are of fiberglass-reinforced epoxy resin with rigid PVC-foam ribs and Courtalds carbon fiber stiffeners. the stabilizer and tip fins of fiberglass/foam sandwich construction. A steel tube connects the empennage to the fuselage with a small tailwheel under the fin.

Tervamaki designed the JT-5 Autogyro cockpit and pilot seat to the same comfort standards found in the best glass sailplanes today, with all controls located for easy handling. Rudder pedals are adjustable and engine noise is suppressed by a large muffler, a soundproofed firewall behind the pilot and a propeller with a low tip speed.

The engine exhaust is direct upward, further to prevent noise pollution below the aircraft. The engine is a Limbach Motorenbau converted 1700cc VW engine with a Scintilla Vertex magneto, delivering 75 to 80 hp at 3800 rpm.

Inspection of the front of the engine is made easy by making the pilot seat back removable. This unit forms the firewall, which also slips out to allow easy routine inspection of the JT-5 Autogyro rotor prerotator, as well as to fill the gas tank. 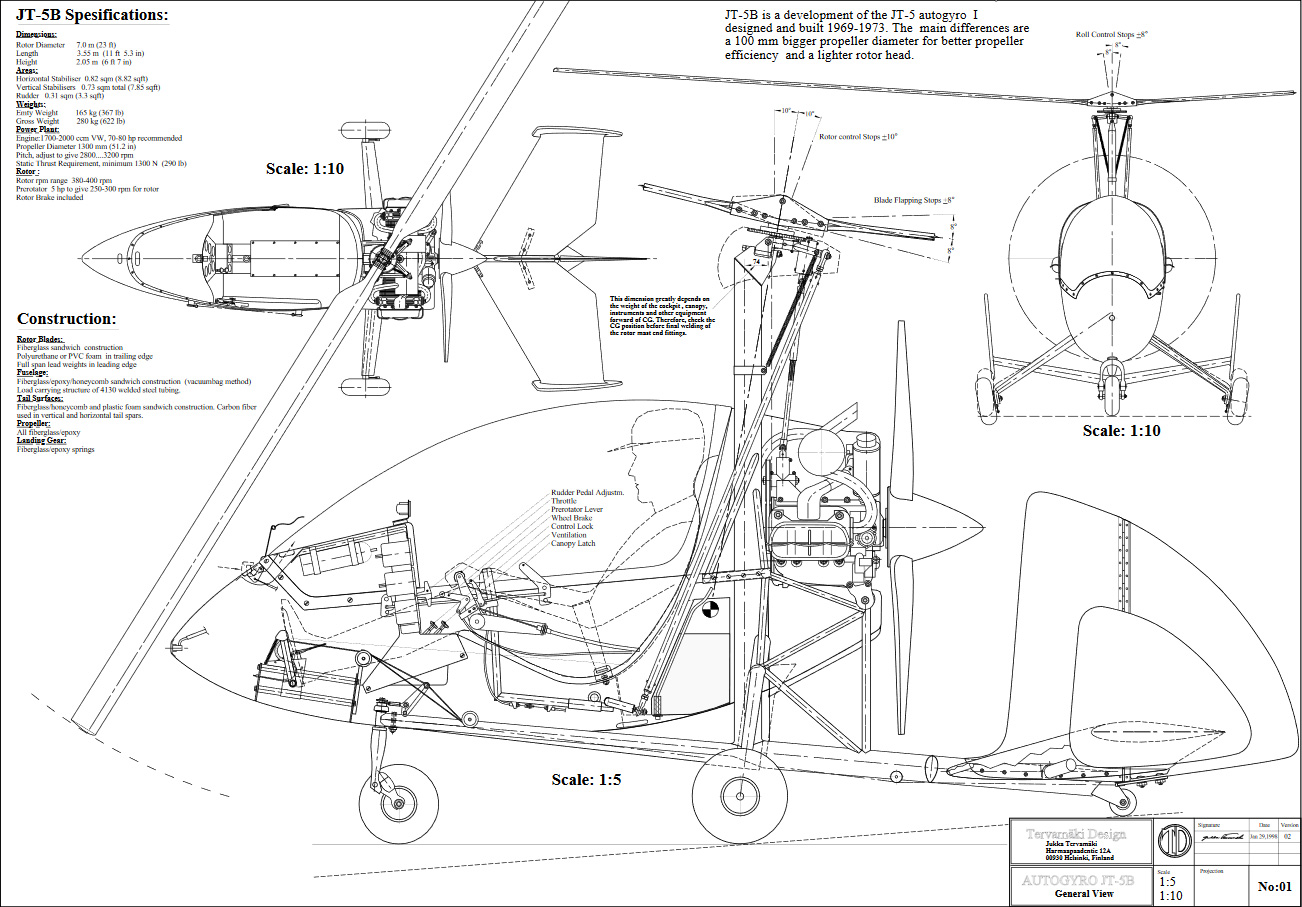 The rear of the engine is open for other required inspection and/or maintenance such as adding oil, adjusting magneto timing and carburetor, and valve clearances The JT-5 is an improvement of an earlier design, Tervamaki’s ATE-3, which did not have the “Constellation” tail, enclosed cockpit, or other composite components.

The prototype JT-5 first flew on January 7, 1973; later Tervamaki sold it, along with production rights, to Sr. Vittorio Magni in Italy, and while there has been no news of Magni’s marketing the JT-5, plans are available for $60 from Tervamaki in Finland.

At least two other JT-5s are flying in Finland, and some 60 sets of plans have been sold. The rotor system for Tervamaki’s pretty little single-seater JT-5 consists of a two-bladed semirigid rotor of fiberglass reinforced epoxy resin over a polyurethane plastic foam core.

The JT-5 Autogyro blades, of constant 71 inch chord and NACA 8-H-12 airfoil, are each attached to the hub with two 10 mm bolts. A 3-meter long lead bar in each blade’s leading edge forms the chordwise balancing weight.

The rotor mast is made from streamlined metal tubing of SAE 4130 quality. The rotor tachometer was built up from a German VDO automotive speedometer, mechanically driven by a flexible shaft from the rotor head. The rotor head is a compact offset-gimbal type, with centrifugal teeter stops and a rotor brake.

Two spiral springs for adjustment are operated by the control stick’s twist handle. Normal rotor speed is 400 rpm with a Vmax of 600 rpm, and the blades have been tested up to 16-20 tons static tensile strength, with a maximum centrifugal load of five tons at 300 rpm in a 3-G pull-up maneuver. 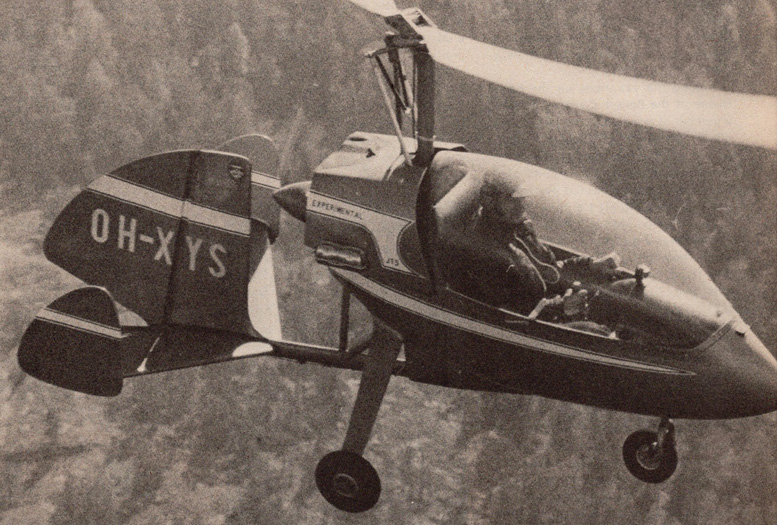 The rotor prerotation system consists of a Vee-belt clutch. 90-degree gear box, sliding universal shaft and an inertia-operated Bendix drive, the reduction ratio 8:1. A rotor spin-up of 300 rpm can be achieved, the prerotation control lever pivoted to the throttle lever for simultaneous use by the pilot’s left hand.

The JT-5’s landing gear is non-retractable, the main gear legs built up of reinforced fiberglass covered with fiberglass fairings, inside which cables run to the brake system Main wheels have 300 x 100 tires, the nose gear has compression-rubber shocks, a 260 x 80 tire and is steerable through the rudder pedals.

Tervamaki also provided for the JT-5 Autogyro instrument panel cover to open together with the hinged canopy to expose its backside for inspection of instruments and provide a look at the nosewheel steering unit, an idea he says he stole form the German Cirrus sailplane.

He added a simple carburetor heating unit for cold weather flying, along with provisions for a cabin heater if required. An efficient ventilating system prevents canopy frosting in below-zero weather Tervamaki says he spent about 2000 man hours, spread over three years, to complete the JT-5.

He received assistance in funding from the Finnish Technical Foundation and machine shop help on the rotor head components from the company he works for as technical manager — Finland’s largest private aviation firm, Wihuri-Yjtyma OY Lentohuolto. 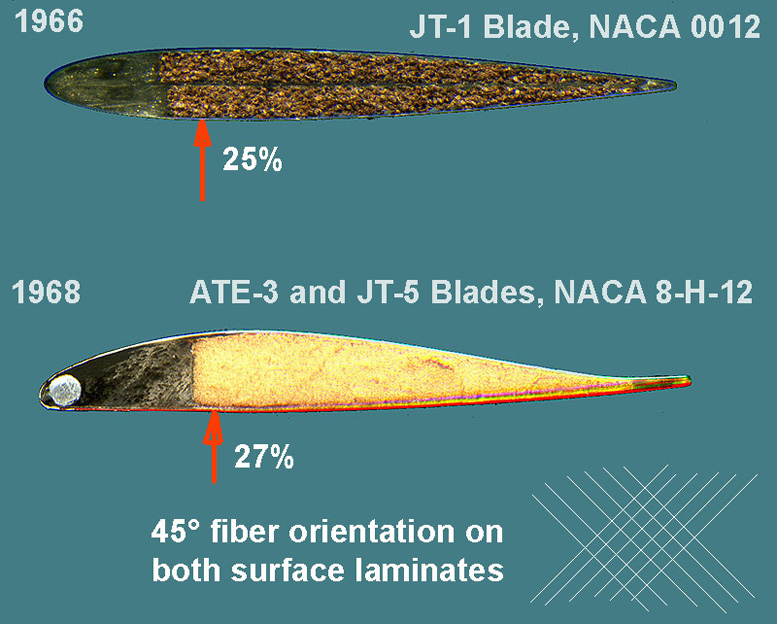