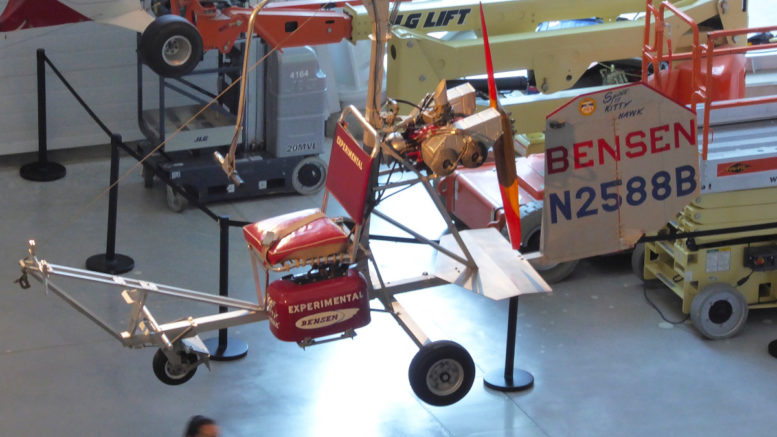 It was once written….

We do advertise in this fine magazine, but HOWCOME? Not one editorial word about Bensen Gyrocopters? Yet, even at Oshkosh, they register in numbers as second or third “most popular” homebuilt design (behind Pitts Special and Thorp T-18). Won’t you take steps to fill this glaring void? Let me know if we can help you. 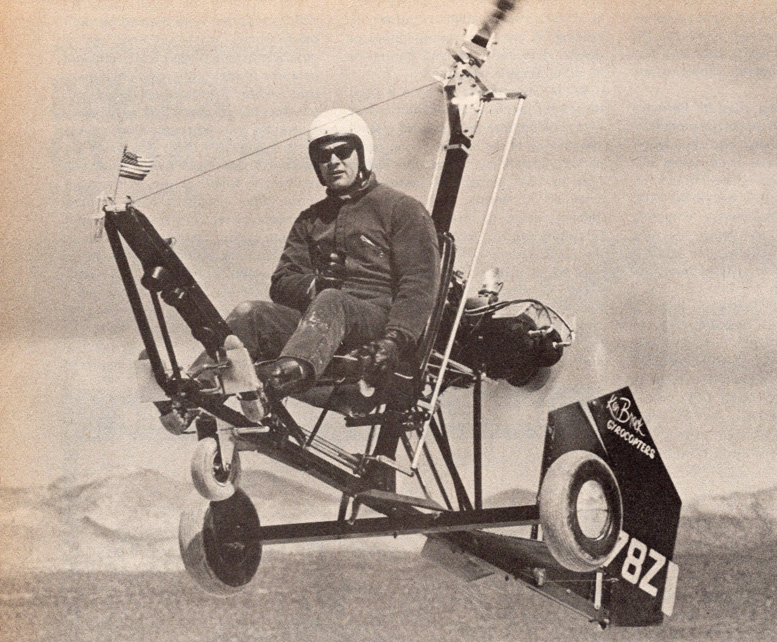 HOMEBUILT AIRCRAFT is indeed sorry to have slighted Dr Bensen, designer of the world’s most popular homebuilt aircraft, and in this issue we hope to make amends. Our reticence was, in fact, not due to oversight, but to caution.

While the Bensen Model B-8 Gyroglider and Model B-8M Gyrocopter are together the most numerous of all homebuilts, their safety record is not perfect. Thus, we have felt an obligation to our readers as well as to our advertisers, and herewith we will attempt to satisfy both — not an easy chore.

Dr Bensen likes to quote his old friend, Igor Sikorsky, designer of the world’s first successful helicopter, the VS-300 “Ugly Duckling.” saying “The good thing about early aviation was that in those days the designers flight-tested their own machines; that way poor designs and designers eliminated themselves” Touche!

Dr Bensen says the course of his life was decided by a face-to-face meeting with Sikorsky in 1939, and after working on rotary-wing aircraft designs for General Electric and Kaman Helicopter Co.

In 1953 he formed his own company, Bensen Aircraft Corp., in Raleigh, North Carolina, with the goal of developing a mass-producible “People’s Flying Machine” capable of door-to-door transportation.

He also sought to make such a machine inherently stable, easy to control and forgiving of small errors, conduct all development on a small scale to keep down research time and costs; flight-test all his own designs personally; and strive for design simplicity. He would “add complexity only as a last resort when all available simple means fail.”

Over the ensuing years Dr Bensen’s firm developed 18 prototype models of both the gyroplane and helicopter genera.

Dr Bensen first flew the prototype of his Model B-8H on june 29, 1973. An historic achievement, it marked the first successful flight of a coaxial, counter-rotating rotorcraft towed in autorotation.

The Model B-8H (“H” for hovering) is powered by two separate engines driving coaxial rotors, and a conventional pusher engine (Present owners of B-8 Gyros can convert to the new hovering design ).

Historically, enthusiasm for rotorcraft was boundless in the 1940s, Dr Bensen recalls, after Sikorsky demonstrated how safe the helicopter was by carrying a basketful of eggs strapped to his craft and landing without cracking a single egg.

Some 200 helicopter firms quickly sprang into existence, but the promise of a universal flying machine went unfulfilled, and in the 1970s certificated helicopters cost upward of $20,000 per seat and required “inordinate skill” to fly. 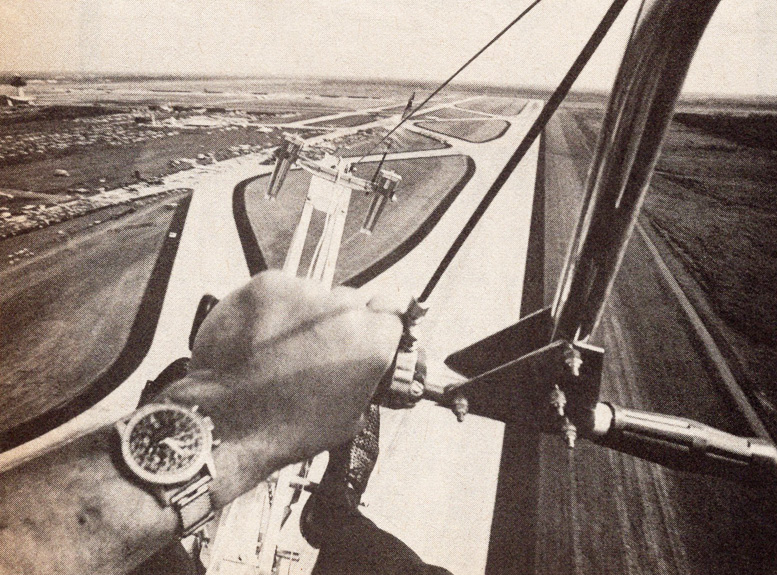 Pilot’s-eye view of the world from “cockpit” of a Bensen Cyrocopter leaves little to the imagination.

Regardless, there is a current boom in production rotorcraft with an estimated 7000 flying today in America’s general aviation fleet.

Predictions are that by 2000 A.D the rotorcraft fleet may outnumber fixed-wing aircraft in private ownership.

Without question, Dr Bensen remains the leader today in production of Gyrocopters (a copyrighted name, from GYROplanes and heliCOPTERS.) Company figures show more than 4000 Model B-8M Gyrocopters have been built since the model was introduced in the early 1950s, with an estimated 2000 currently flying.

And what happened to the rest? “Many fell victim to natural attrition and inactivity,” says Dr Bensen.

Many have met other fates, unfortunately; gyro accident reports in the files of the National Transportation Safety Board, the Federal Aviation Administration and the Experimental Aircraft Association are shockingly high.

One EAA study revealed that in the years 1967 and 1968 and January 1969, 46 Gyrocopter accidents occurred, including 28 involving serious injury or death. Thirty-four involved Bensen or modified Bensen equipment.

While Gyrocopters do have a good record for mechanical reliability, their high accident rate, perhaps understandable in view of the number flying, is apparently largely due to improper operation. In 1978 alone, EAA reported a total of 12 Bensen Gyrocopter accidents, including seven fatalities.

Three fatalities occurred, EAA reported, when the Gyrocopters rolled inverted and crashed in 1976, NTSB reported three other Gyrocopter fatalities that resulted after the main rotor blades and tail rotor collided inflight, two during uncontrolled descents and the third during a low pass.

EDITOR: And thus, ever since, gyrocopter designs have evolved and progressed into safer and more stable designs. Also, the regulation of gyrocopter flight training has progressed favorably. 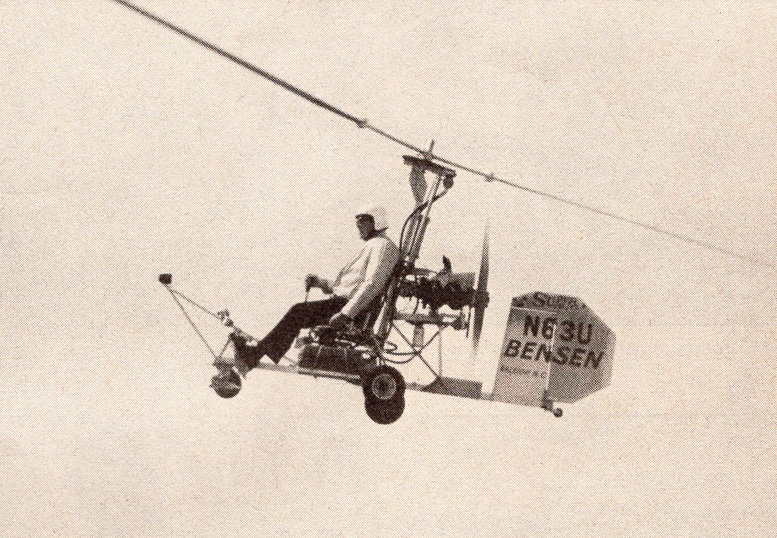 A NEW TYPE of rotorcraft was introduced to the public at Rockford, Illinois during the Popular Rotorcraft Association’s 19th annual convention in July Dr Igor Bensen’s “Hydro-drive Gyrocopter”.

Described as a cross between a helicopter and an autogyro, its rotor is powered by a hydraulic motor, yet it does not have the antitorque tail rotor common to helicopters.

The new machine, says Dr Bensen, combines the simplicity and low cost of an autogyro with the improved aerodynamic efficiency of power-driven rotors, utilizing an auxiliary hydraulic drive system to bleed off some power from the main engine and transmit it continuously to the rotor.

Thus the hydraulic drive not only spins up the rotor from standstill, it continues to drive it in flight, and the amount of torque produced is compensated by the rudder in the propeller slipstream. Flying characteristics are reportedly more comfortable to the pilot’s natural reflexes than those of either helicopters or rigid-wing aircraft.

The large rotor is set in autorotative pitch and feels in Might like the control of a high-wing aircraft, according to its inventor It reportedly cannot stall or spin because the rotor is continuously turning like a windmill, and power-off approach and flare are executed with cyclic control stick only. No-power, non-collective pitch controls are used for landings.

The majority of Gyrocopter accidents reported were blamed on such operational misjudgments as a pushover after a steep climb, followed by a loss of the rotor.

Collision of main rotor and tail rotor blades typically occur, according to one study, after push-over at the top of a zoom, which causes the main rotors to flap downward excessively, striking the tail rotor and resulting in failure or loss of the main rotor. Other accidents have resulted from delayed recovery from a too-rapid descent, making flareout impossible.

So that’s the bad news. As in flying any homebuilt aircraft, pilot proficiency is the key to safety, and that can only come with proper training and experience. It is ironic that pilot error is to blame for the majority of Gyrocopter accidents when the craft was designed specifically for simplicity of construction and operation.

Let’s put to rest the notion that flying a Gyrocopter is a complicated matter. Essentially it is one of the simplest aircraft flying today, but as with any other aircraft, you must learn to fly it correctly.

There are authorized Bensen dealers in 14 different states and in Australia, Canada, Japan, and New Zealand where Gyrocopter flight training is available Obviously no dual instruction is possible or required in the single-seat Gyrocopter, but you must demonstrate proficiency with the FAA examiner standing on the ground watching.

Three landings (and takeoffs!) are required, in either the Gyroglider or Gyrocopter, in addition to thorough ground school training Bensen Gyrocopters have set numerous records; they are the only homebuilt aircraft ever to hold a dozen official world records in speed, distance and altitude under NAA/FAI sanction.

In 1971, Ken Brock, a Southern California Bensen dealer, flew a Gyrocopter from Long Beach to Kitty Hawk in 10 days to demonstrate its versatility and reliability The Bensen B-8 Gyroglider can be a world of fun. towed aloft by car or boat; Dr Bensen says it’s like water-skiing in the air. “You can even fly them tethered in an adequate wind,” he adds.

You can also convert your Gyroglider into a Gyrocopter by adding an engine, or into a Hydroglider by fitting it with twin pontoons Wheels and floats are interchangeable; if you’re in Canada you can skim the treetops of the North Woods on skis to get away from it all. 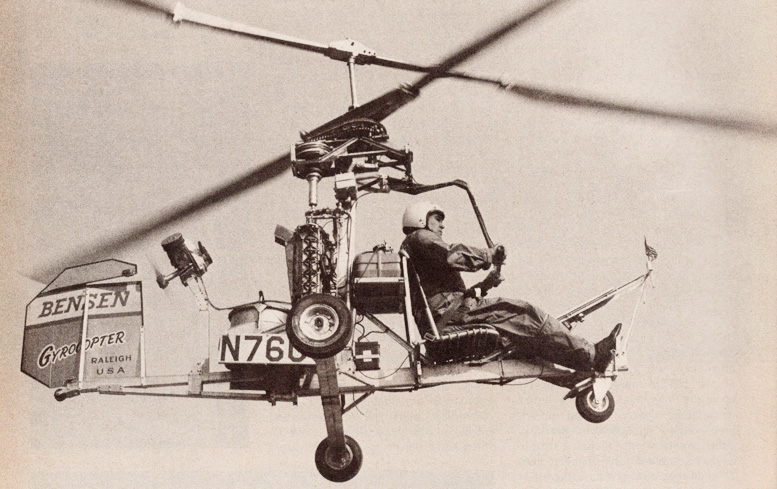 Among the variations on the basic theme of the Bensen Gyrocopter were a number of research rotor craft, one of which, the Model B-12 Magic Carpet, was a design study for future super-cargo helicopters that cross-connected eight rotors, each powered by two engines, intended to lift 100 tons.

The Bensen Model B-10 “PropCopter” was a direct-lift VTOL craft in which the pilot sat astride a saddle as if on a flying motorcycle. It was powered with two 72-hp engines. The Model B-11 was another successful multi-engine Gyrocopter that used six go-kart engines and could maintain level flight with any two engines out.

Perhaps the smallest and lightest rotorcraft ever built was Bensen’s Model B-3 “Heli-Gyro” that weighed only 65 pounds and was collapsible to fit inside a station wagon for transport.

Other oddities were the Model B-5 “Mid-jet” ramjet-powered helicopter developed for the military, and the twin-engined Model B-16 Gyrocopter on skis — the “Flying Snowmobile.”

In 1962 Dr Bensen, in company with eight other rotorcraft pioneers, founded an organization of whirlybird pilots called the Popular Rotorcraft Assn. (PRA), which in its first decade grew to include 13,000 members with 50 chapters throughout the world PRA publishes a semitechnical magazine, Popular Rotorcraft Flying, and holds annual conventions. 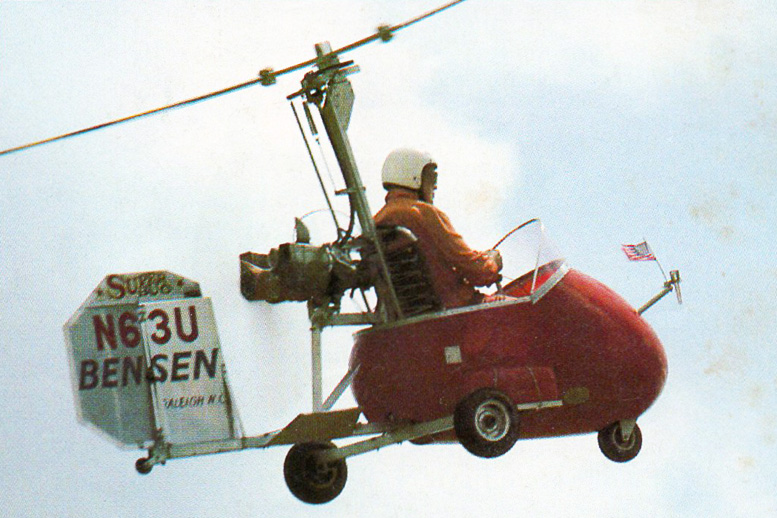 This year the PRA convention was held at Rockford, Illinois on July 20-26 Dr Bensen’s Model B-8 Gyroglider, classed as an unpowered rotor kite to be towed behind a car or boat, is therefore not considered an aircraft by the FAA, so no pilot’s license is required to fly it.

A side-by-side two-seater B-8 is sometimes used as a pilot trainer. The Bensen B-8’s free-turning two-blade rotor is universally mounted atop a T-frame aluminum structure and may be tilted by an overhead “hanging” control stick to control direction of flight.

A movable rudder with pedal controls is standard. The Model B-8M powered Gyrocopter first flew on December 6, 1955, and was specifically designed as a homebuilt project from kits or plans.

The current 8-BM uses the more powerful McCulloch 4318G engine of 90 hp and can be equipped with a mechanical rotor drive as an option. A larger diameter rotor also is optional, along with a floor-mounted control column, dual ignition, nosewheel arrester and pontoons.

Other derivatives include the Model B-8V with the 1600cc VW engine; the Super Bug, an advanced version of the standard B-8M with a twin-engine installation for pre-takeoff rotor spin-up, and the B-8H Hovering Gyrocopter mentioned earlier. 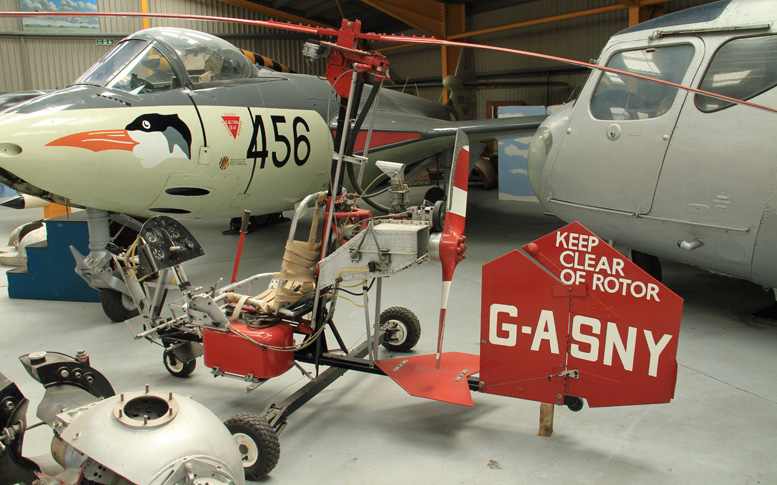 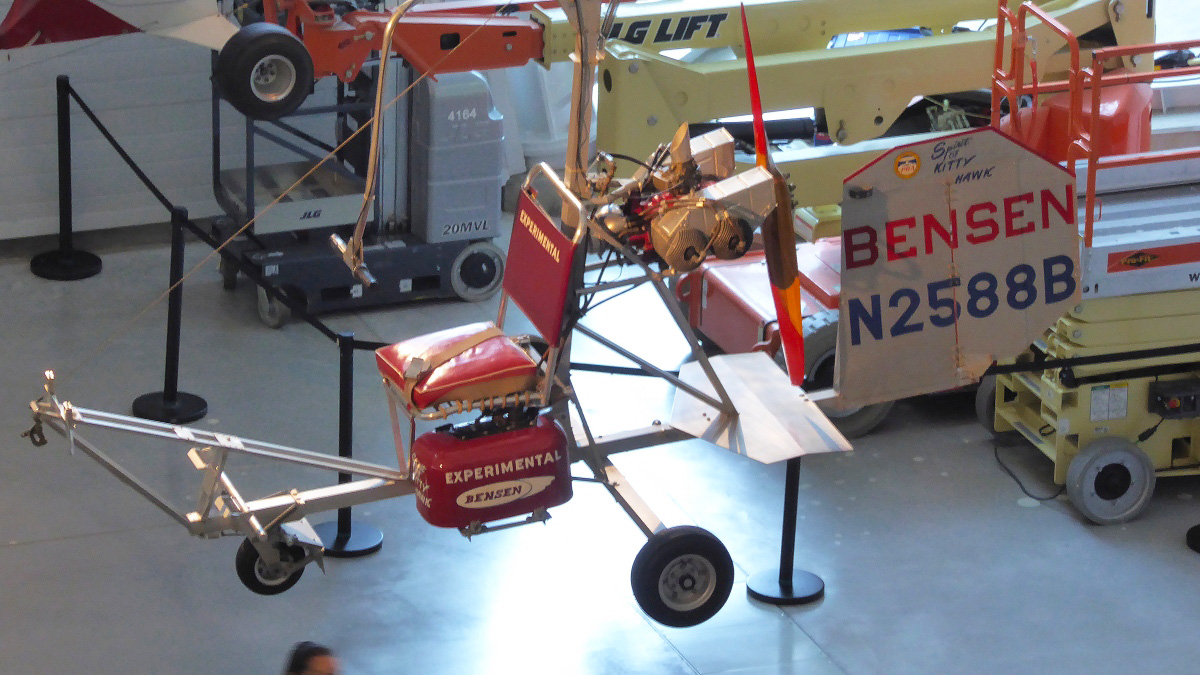