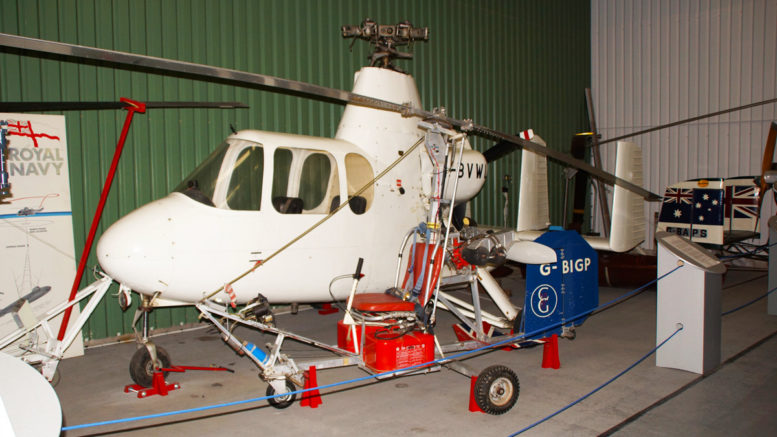 Vertical landings and takeoffs still lure homebuilders to the field

Experimental helicopters, gyroplanes, vertical takeoff machines and other rotorcraft have been going on nearly as long as man has dreamed of personal flight. We’ve always envied the ability of some birds to takeoff straight up and land on any chosen spot.

While some of these experiments have led ultimately to commercially produced and operated helicopters—auto-giros enjoyed brief popularity in the late 1920s and early 1930s — many of them proved to be only a means of exploring their originators’ special ideas.

But, while the original ideas are still being explored, most of today’s rotorcraft are built on well-tested and proved principles. What’s really changed is the power available.

Engines have become more powerful and lighter in weight, a condition particularly agreeable with vertically-operated aircraft, since the rotors are the wings and must lift all of the vehicle weight as well as its useful load.

The advent of plentiful, lightweight engines led experimenters such as Dr. Igor Bensen toward powering simple autogiro-type vehicles.where a separate drive engine and propeller push the vehicle forward, which in turn causes the freewheeling rotor to rotate. 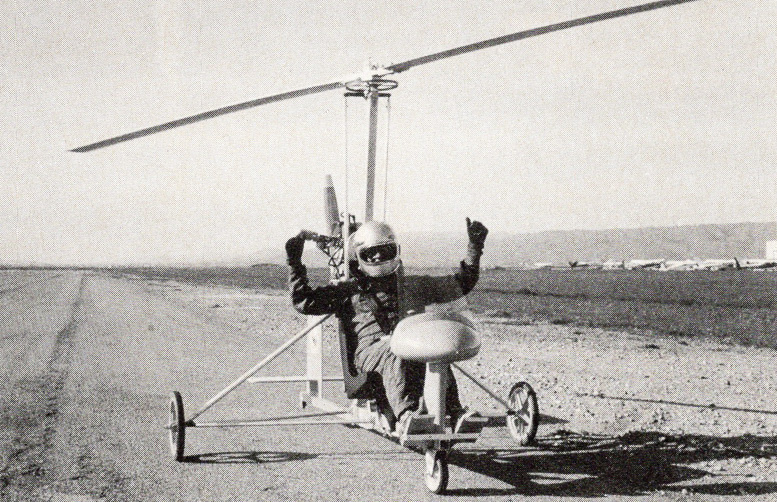 New Bumble Bee from Aircraft Design is classified in ultralight category because it weighs only 180 pounds empty.

As it rotates, it generates lift (remember your youthful experiments with seed pods that would spin to earth?), which causes the whole thing to fly. With the thrust vector and the lift vector headed in the proper directions, autogiro flight becomes simple indeed.

Flight is controlled by a rudder (which vectors engine thrust) and the pitch angle of the rotor itself. The rotorcraft pilot has a stick type of control that moves the rotor on its mounting head to create the pitch-up, pitch-down vector.

As this is similar to the autorotation mode of a helicopter, shutting down the power on a gyroplane simply means the pilot has to change his lift vector to autorotate to the ground.

Homebuilt helicopter design has followed commercial development toward stronger, lighter systems, and the home craftsman is still pursuing his dream of completely vertical takeoffs and landings. Now there are commercially available rotorcraft plans, kits and components for him to work with however, so there are more good homebuilt helicopters than ever flying around.

Noteworthy rotorcraft are the RotorWay Exec and Helicom Commuter designs. Both were designed by professionals in the field of vertical flight. Helicopters, of course, have driven rotors, as compared to gyroplanes’ free-wheeling units.

Thus the helicopter rotor must provide both lift and forward thrust, a complex design requirement that can elicit hours of learned discussion from any “rotor rooter.” For a look at what’s currently offered in the rotorcraft field, here is a review by manufacturer and designer.

Designer Martin Hollmann has produced an “ultraight” gyroplane, with the idea that it should catch on with the current devotees of that aviation segment. The beauty of operating under ultralight regulations.

Part 103 (or should we say “non-regs”), is that neither FAA pilot’s license nor aircraft license are required. With its 60 mph top speed and 180 pounds empty weight, the A Hollmann Bumble Bee rotorcraft certainly qualifies as an ultralight.

The Bee utilizes a 38.5-hp Kawasaki motorcycle engine for power to drive a cog-belt reduction on the propeller. Hollmann says this system gives 220-pounds of thrust, more than enough to lift a 300-pound pilot. Rate of climb with a normal-sized pilot is said to be 800 feet per minute.

The Bee has composite rotor blades, which have a laminar flow section. Rotor diameter is 23 feet and the disc loading at gross weight is 1.2 pounds per square foot. Hollmann has designed the Bee for 15-minute assembly in the field. There are no bracing cables, and a minimum of struts to attach.

The Bee is sold in kits; the starter kit includes plans, all airframe materials and nuts, bolts and rivets. Its price is $750; total price of all kits (including engines, propeller and rotor blades) is $5130.

A flight instruction course is $280 additional.

Jerrie Barnett first laid down the plan for the J4B in 1968 and has been flying it ever since. He regularly participates in airshows near his northern California homebase in Olivehurst, and his flight program has helped him make constant improvements on the original design.

The J4B is a gyroplane; that is, it has a rotating wing that is driven by the airstream. Forward motion is produced by the engine. The engine is located on the aft side of the rotor mast, balancing the pilots weight on the front of the mast.

The basic rotorcraft structure is made of welded steel tubing, including the rotor mast and rudder supports. Tricycle landing gear features a swiveling nosewheel and shock-absorbing main gear. A lightweight fiberglass pod encloses the pilot. 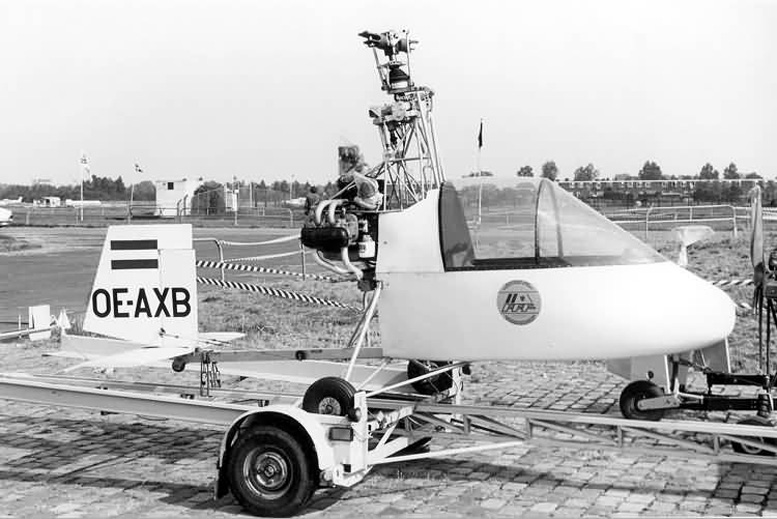 The engine used in the prototype is a Continental 0-200 aircraft engine of 100 hp. Barnett says engines from 65 to 100 hp are adequate. Engines are mounted in the pusher configuration.

Empty weight of the J4B gyroplane is listed at 441 pounds, and the useful load is 850 pounds, so the aircraft will handle large pilots or heavy fuel loads. The rotor diameter is 23 feet diameter.

Barnett sells rotorcraft plans for $80 and a kit is available for $4000; some prefabricated parts are also available.

Although it weighs only 136 pounds empty, the BW Sky Kopter is said to lift a useful load of more than 500 pounds. Basically a gyroplane with a pair of pressure jets mounted on the rotor blade tips, the Sky Kopter offers an unique approach to the problem of powered flight.

The pressure jets are Gluhareff GB-2-20 units which operate on bottled propane fuel. The fuel flow is conducted through a sealed ring at the rotor head then through lines in the rotor blades to the jets at the rotor tips.

Maximum two-man crews weight is 400 pounds (the two- 30-gallon fuel bottles soak up the other 100 pounds) yet the Sky Kopter is said to have a rate of climb of 800 feet per minute and a cruise speed of 40-50 mph. Kit price of the Sky Kopter is $2795, which includes the engines but not the fuel bottles. 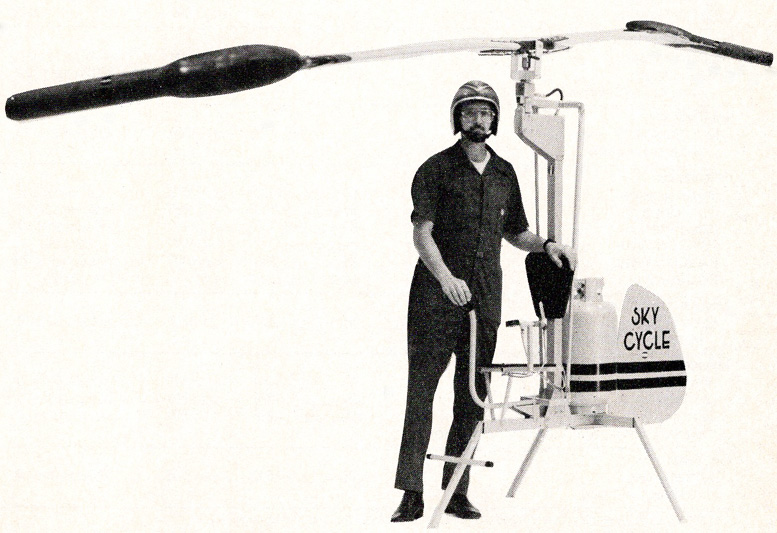 A single-seat version of the Sky Kopter rotorcraft is called the Sky Cycle, which has a kit price of $1995. Cruise speed is said to be 50 mph and rate of climb 975 fpm. Empty weight is 95 pounds; gross weight 500 pounds.

BW offers a Giro Kopter trainer kit for $899. This is an unpowered. tricycle gear gyroplane which can be used to learn gyro flying. It has a single seat, uses a 20-foot diameter rotor, and can be converted to a powered gyro at a later date.

Granddaddy of the self-built gyroplane movement is Dr. Igor Bensen, a scientist and priest who has been involved in helicopter design and development for 31 years. Bensens gyroglider and Gyrocopter™ designs sparked the interest that has led hundreds of pilots into rotor flying.

The Bensen gyroglider was an unpowered aircraft that could be towed by a car (or a boat when fitted with suitable floats) to teach fledgling gyro pilots how to control this new type of aircraft.

The glider led to the copter and powered flight. Over the years, Bensen has developed a dozen variations on the basic theme, but the basic seat, rotor and engine have remained virtually constant.

While the “Mac” is a direct drive to the propeller, the Rotax, which turns 6200 rpm at full power, has a reduction drive that utilizes a lightweight cogbelt system.

Performance for both B-80 and B-85 are similar, according to Bensen figures, with the Rotax powered B-85 having a slight edge in cruise speed. Both are shown as 250-pound empty weight aircraft but the Rotax aircraft has 650 pounds gross to the McCulloch’s 600 pounds.

Ken Brock is another long time gyroplane enthusiast, and he got his start with Bensen equipment. At one point. Brock was a Bensen dealer, but started making so many custom items that he decided to custom-design his own gyroplane.

This company offers a variety of designs, from the Sky Kopter and Sky Cycle already mentioned under BW Rotor Co., to the Helicraft Jet and several Giro Gliders. They have a range of various configurations. Helicraft offers both plans and kits for these aircraft.

The BW-20 is a conventional gyroplane suitable for engines from 30 to 120 hp. The original aircraft was flown with a McCulloch 72-hp two-stroke, which gave it a top speed of 80+ and a useful load of more than 300 pounds. Plans are $33.

RotorWays current helicopter is the Exec, by far the most sophisticated helicopter available to the homebuilder today.

This rotorcraft company has taken over marketing of plans and kits for Harold Emighs Commuter IA and I IB helicopters. Both are Lycoming 0-320 (150 hp) powered with 100-mph top speeds and 600-pound useful loads. The -A is a single-seater, the -B a two-seat copter. Construction plans for either are $100.

The Vancraft Copter is one of the larger two-place gyroplanes, lifting an 800-pound gross weight with one large converted VW engine. Rotor diameter is 28 feet, the largest of any of the gyros or helicopters listed.

The Vancraft sports a nearly full enclosure made of fiberglass. The designers, Charles and Jim Vanek, say the aircraft could be constructed in 100 hours from the kit. 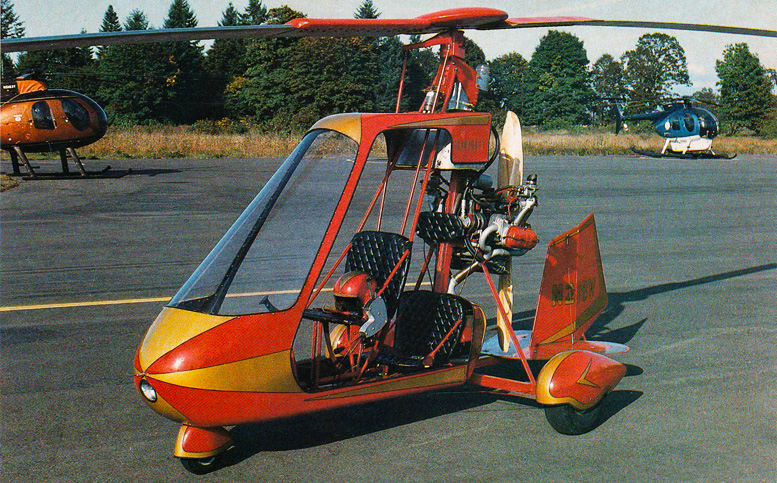 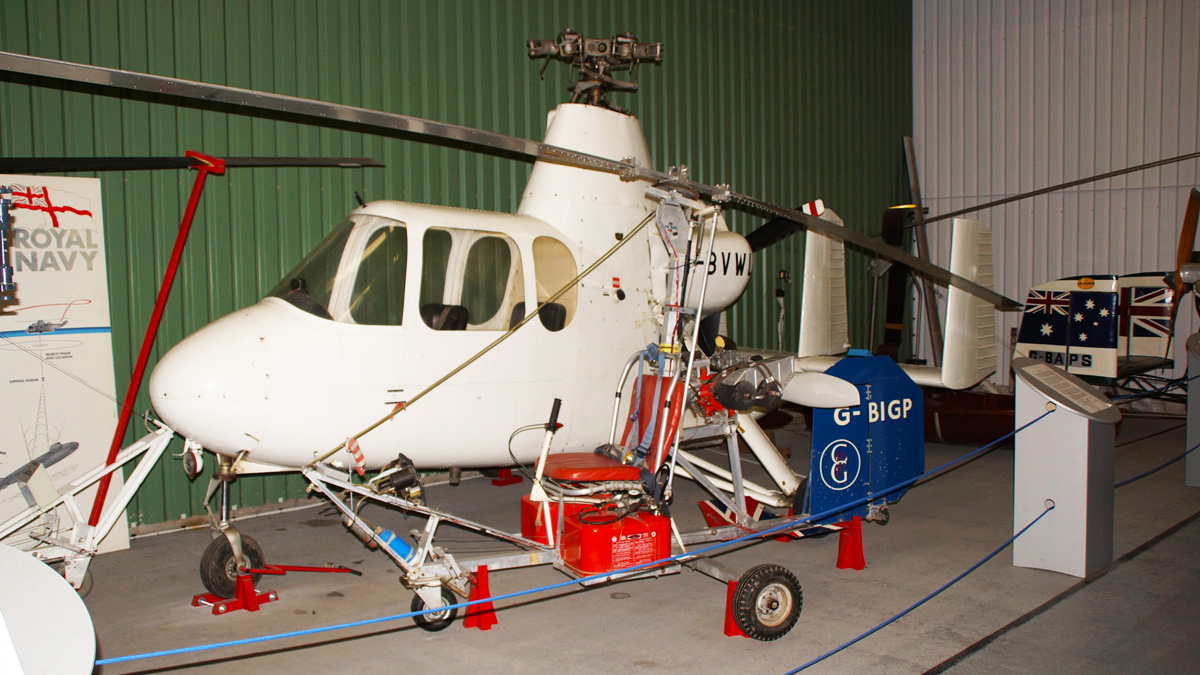 Article Name
Rotorcraft Of The 1980's
Description
See what we were all interested in back in 1984. There were rotorcraft of all shapes and sizes - Bumble Bee Gyrocopter - Gluhareff powered Sky Cycle and the Vancraft Copter were just a few.
Author
David Lewis
SHARE TWEET PIN SHARE