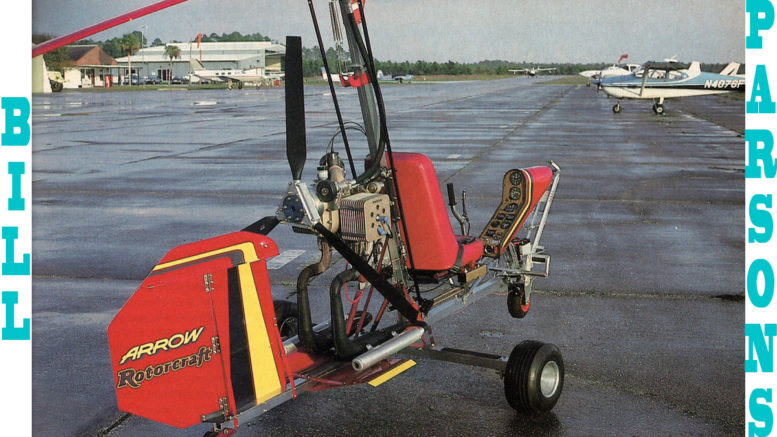 Bill Parsons has been flying gyros for 25 years; he attributes his longevity to proper training. 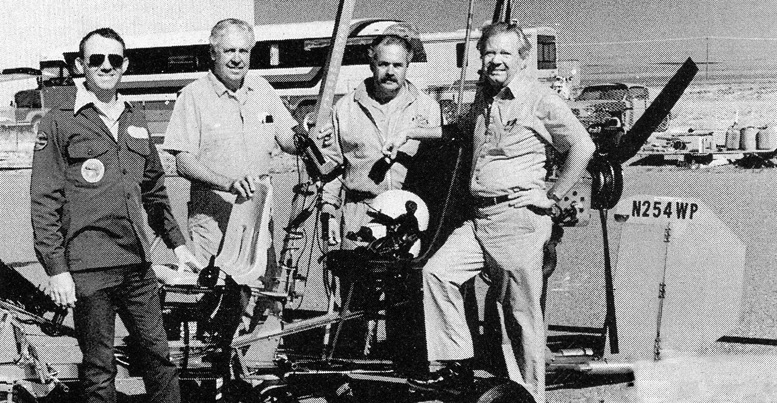 These men have nearly a century of rotorcraft experience between them. From left: author Lon Lawrence, Parsons, gyroplane CFI Duane Hunn, and Don Farrington, the man behind the Air & Space 18A four-place gyroplane.

Bill Parsons gave some last-minute instructions to his student before turning him loose to solo in the gyroplane. “Go around the pattern,” he said, “but stay close to the ground. Don’t get too high.” The student started his takeoff run; his rotorblades came up to speed and he was off. He climbed and climbed and continued to climb.

“I told him not to go too high,” Parsons muttered, shaking his head in disapproval. Suddenly, the plane began pitching up and down — the student was panicking as his altitude increased and he was over-controlling the machine.

Old gyro pilots know about pilot-induced oscillation; they call it too much too late, chasing your altitude. On the third oscillation, the rotorblades encountered negative airflow and probably struck the tail. The gyroplane rolled over and crashed, killing the student pilot. This was a first for Bill Parsons. He was in shock, yet bitter, too.

There was just no good way to train people how to fly open-frame, Bensen-type gyroplanes. The world had yet to see its first two-place trainer, unless you considered the side-by-side, towed gliders in use at the time to be practical. 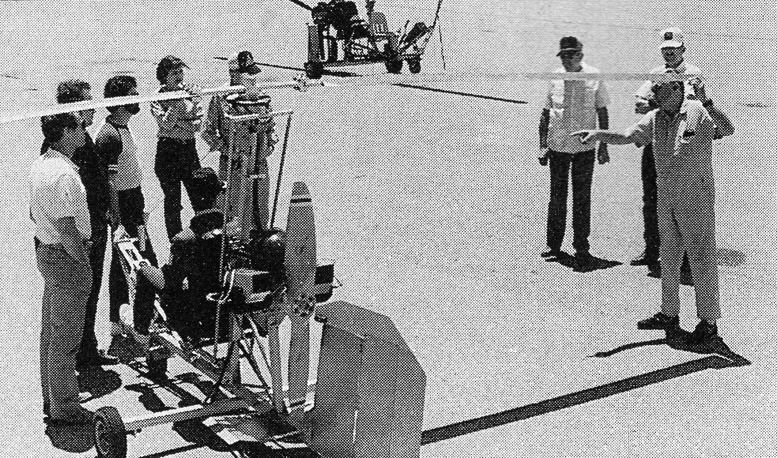 Because he believes good training is the key to safe flying. Bill Parsons travels around the country giving gyroplane training seminars like this one in Albuquerque, New Mexico.

But thought them a poor simulation of a powered gyroplane. He swore he’d never train another gyro pilot until he had a powered two-place trainer. That was six years ago. Parsons has since built many Parsons’ Trainers, the two-place gyroplane that has become an industry standard for gyro training. 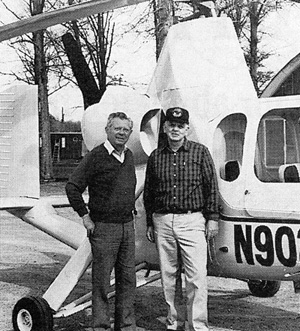 Air & Space America president, Don Farrington (left), and FAA Manager for Rotorcraft Standards in Fort Worth, Texas, James Sharpley, are standing in front of one of the newly certified Air & Space 18A gyroplanes.

The FAA, which only recently granted instructors permission to charge for training in experimental gyroplanes, last year gave the Parsons’ Trainer the official nod (after many months of intense lobbying by the Popular Rotorcraft Association), making it the only experimental gyroplane approved by the FAA for pilot training.

“I think a tandem gyro is the only way to train,” says Parsons, “besides, there aren’t any certified aircraft that can simulate flying a single-place gyro.” Originally a fixed-wing pilot, Parsons has owned or had interest in a dozen aircraft. He currently owns a Cessna 172 that he rents out and seldom flies himself.

“Once I realized how safe they were,” he explained, “I decided a gyro was the thing for me.” But even the gyroplane’s inherent safety hasn’t kept Parsons from wrecking a couple over the years. “Twenty-one years ago, when I was first getting into gyroplanes, I took off from the airport at Lafayette, Florida, and was flying above the golf course next to the airport,” he remembers.

“I let down to treetop-level and was starting a turn back to the airport. There were telephone wires between me and the airport, so I tried to get up all the speed I could to get over them.”

“I didn’t make it — hit the wires and went down in the city of Lafayette’s settlement pond. I had to wade through waist-high raw sewage. A couple of city employees came over and took a picture of the wreck. The whole thing was pilot error.”

When Parsons started flying gyroplanes, the most popular powerplant was the McCulloch drone engine, which is still widely used today. Used to power target drones during WW-II, the “Mac,” as it is affectionately known, was designed to have only a 25-hour lifespan.

Although McCulloch also made a 90-hp drone engine, the easiest version for home-builders to obtain was the 72-hp, two-stroke, four-cylinder, horizontally opposed version. (With the 72-hp McCulloch, pilots used to claim, every turn was a descending turn.)

After two years of flying, Parsons changed the intake manifold to accept dual carburetors, which significantly increased the power output of the engine. He started advertising his dual manifold in various magazines and was soon in business. The same modification to the 90-hp McCulloch resulted in an engine known as “the Parsons’ Super Mac.”

Parsons currently sells rotorheads and various parts and accessories, as well as plans and kits for single- and two-place gyroplanes. He also trains pilots from all over the world. Parsons figures that he and his friend, Duane Hunn, a gyroplane CFI, have trained more than 600 gyro pilots. 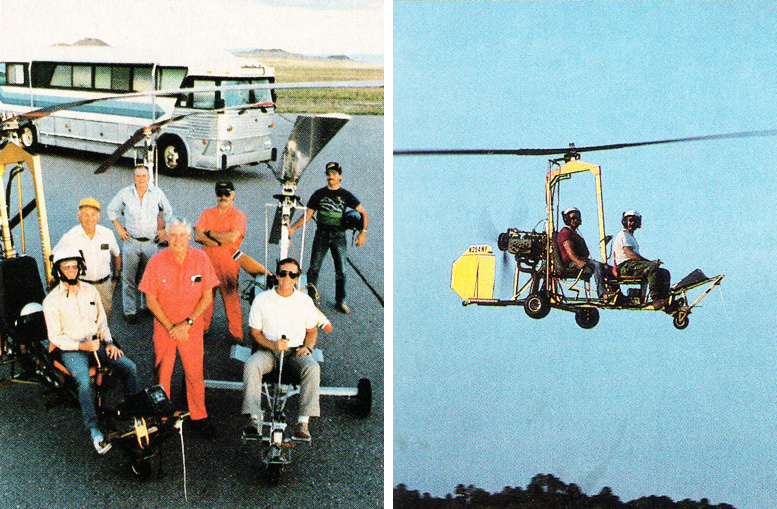 LEFT: Parsons and Hunn (center, in jumpsuits) pose with some of their students and, at left, one of Parsons’ two-place training gyros. In the background is the bus Parsons uses for his mobile training seminars.
RIGHT: Instructor Duane Hunn gives a student some airborne pointers in Parsons’ two-seat trainer at his home base in Lake Monroe, Florida. In addition to instructing, Parsons is the North American distributor for Italian-built Arrow engines, like the one powering this gyro.

Parsons is also the only authorized distributor for the Italian-built Arrow engine in the U.S. and Canada. Arrow engines are available in one-, two-, four-, and six-cylinder versions, with power ratings from 34 to 120 hp.

Parsons considers the Arrow one of the most reliable two-stroke engines on the market. His training gyro is powered by a four-cylinder Arrow that has more than 500 hours on it without a problem or an overhaul.

Bill Parsons was not always in the gyroplane business. For many years, he owned a heating and air conditioning business and a motorcycle repair and accessory shop in Chattanooga, Tennessee. But on Christmas Day, 1969, his shop burned down. The carpet mills in Chattanooga closed and the area slid into a depression. Parsons decided to move back to Florida where he was raised.

Today, Parsons, a 62-year-old pilot who can still pass his flight physical and who has accumulated more than 5000 hours in all types of aircraft, is still upgrading his ratings. He currently holds single-engine land, multi-engine land, single-engine sea, glider, and commercial rotorcraft gyroplane ratings and is working on his gyroplane CFI ticket.

Before he retired a year and a half ago, Parsons spent his free time traveling across the country putting on airshows. His 12-minute routine included vertical descents, spinning vertical descents, 90° turns, flying backward and sideways, and demonstrating engine-out autorotation landings. He has cut back to only one show a year, but still travels putting on training seminars.

A few years ago, while putting on an airshow, Parsons was doing a spiraling vertical descent complete with colored smoke. “It was a beautiful day,” he recalled, “and I was watching the smoke and the scenery, and the next thing I knew, I hit the ground!” He had inadvertently spiraled all the way to the ground. He totaled out the plane, but walked away with nothing hurt but his pride.

He claims that 99% of all gyroplane accidents that kill pilots are caused by pilot-induced oscillation, or PIO. “With most other types of accidents, you’ll bend your plane, but you’ll probably walk away from it.” he says. “I’m trying my best to promote safety. That’s the reason I built the two-place trainer.”

Asked about his most frightening experience while training students, he replied, “I’ve had students who would be on final with everything just right, then all of a sudden, they’d shove the stick forward for no reason—sometimes they’d do it on take-off! Now that’s scary.”

As a result of one too many such incidents, Parsons’ trainers now have spring-loaded, bend-away sticks for the student so that the instructor has the last word about which way the joystick goes.

Every year, high-time airline pilots and fixed-wing CFIs (as well as novices with little or no gyro training) are killed in gyroplanes accidents. There’s a misconception that, gyroplanes are so easy to fly, you don’t need lessons, so many people try to teach themselves.

Gyroplanes are no easier to fly than fixed-wing aircraft; plus, they have some unusual characteristics, just like a helicopter. It’s true, Parsons says, that there are some inherent qualities that make gyroplanes safer to fly than other aircraft, but teaching yourself to fly any aircraft is asking for trouble.

Even Space Shuttle astronaut Jim Erwin, who’s flown all types of sophisticated aircraft, had enough respect for gyroplanes to get some training before trying to fly one — he went to Bill Parsons. Parsons soloed him after one lesson and cut off his shirttail, a right of passage Erwin somehow missed when he soloed an airplane many years ago. 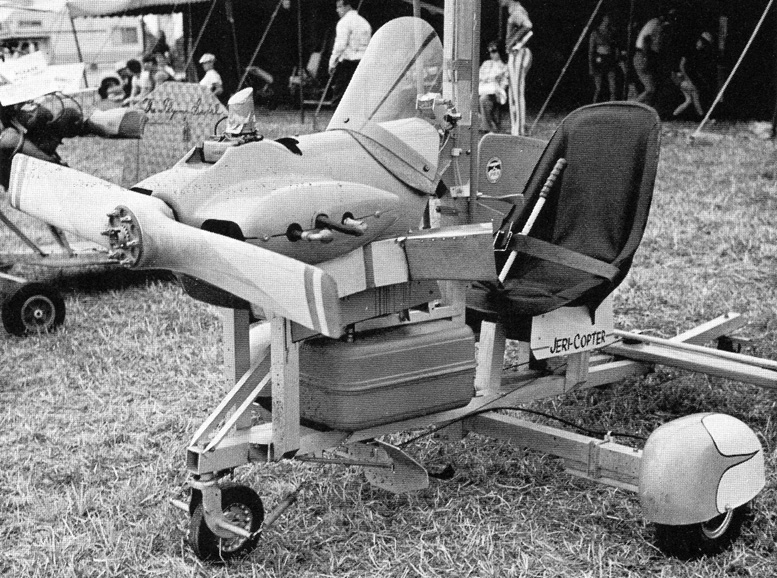 FEBRUARY 1975: The Jeri-Copter by John Hughett of Johnson City, Tennessee is an unusual variation of the more common Bensen theme — a tractor version of a one man gyro plane. 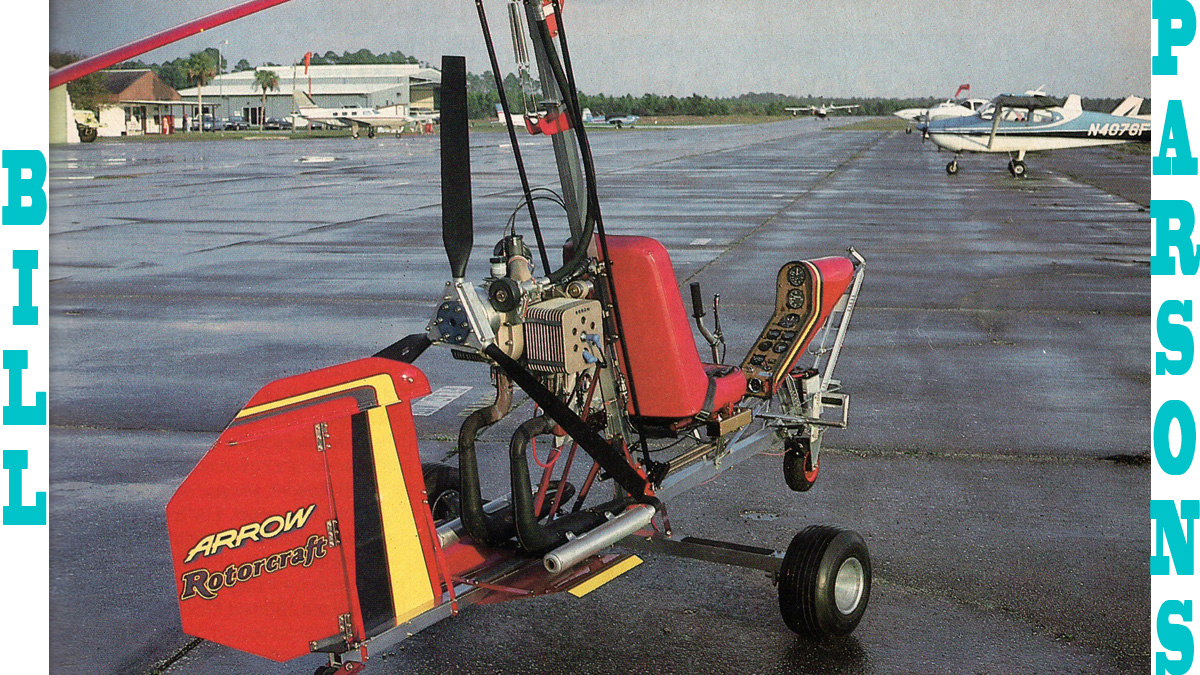 A Starter For The McCulloch Engine

Be the first to comment on "Bill Parsons Gyrocopter Guru"