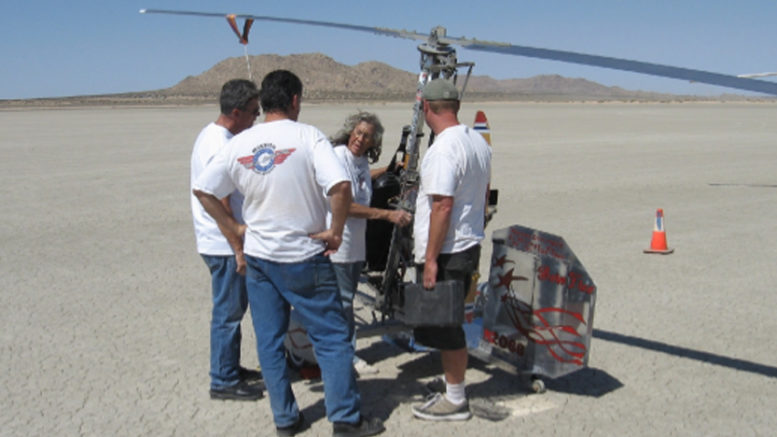 Fitting a custom starter to the old Mac

The McCulloch engine doesn’t come equipped with a starter but that wasn’t a problem for me during my years of gyro flying because my husband Docko, was there to prop the engine for me. With his help always available, I never even thought about a starter.

Docko passed away, and I retired from gyro flying and instructing. Several years later I decided to fly again. Chapter 1 gyro pilots were kind enough to go through my gyro which had been sitting idle for 12 years. They brought it up to flying condition, and suddenly I was flying again. But Docko was no longer there to start the engine. That’s when not having a starter on the gyro became a big problem.

Pulling a prop though to start the engine is not something you can just ask any passerby to do. It is a dangerous procedure and the one who handles the prop must understand how to do it properly and safely. In my career I had started the McCulloch engine exactly twice by pulling the prop through but that was many moons ago, when I was younger and more nimble. 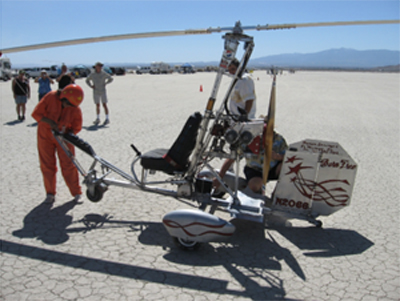 When I became a Bensen dealer I propped it at Igor Bensen’s request. He wanted to see if I could start the Mac by myself. I started it another time so Docko would know that I could start it if I had to. That was the total of my propping the engine.

At this stage of life I really didn’t want to have to prop the engine to fly. In my group of gyro friends there were only two gyro pilots who were experienced in propping the McCulloch. Neither one lived in the area, and both were up here in the high desert only occasionally, so if I was going to fly, I needed a starter.

To my great joy, there was a discussion on the Rotary Wing forum on the internet about starters for the McCulloch Engine. Mark Carmouche said he could make a starter kit so I ordered one from him. When the kit arrived I contacted Dave Bacon, a gyro pilot friend, to see if he would put the starter on my gyro. He said he would.

Poor Dave, he probably didn’t realize what he was getting into! It was the middle of summer with day temps over 100 degrees in the high desert. He traveled a couple of hours each way from his much cooler home base over several weekends to work on the starter project in a sweltering hot hangar. 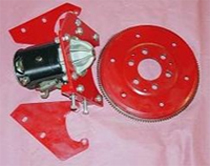 Dave mounted the starter and hooked it up to a battery and we pushed the gyro out to the run up pad and ran the engine up briefly. Our joy was cut short when it was discovered that the starter had slung a bushing and it had gouged the propeller. So, back to the drawing board.

The starter that had come with the kit had been a reconditioned starter. It didn’t have a cap or cover on the front end which was supposed to keep everything inside where it was supposed to be, and that allowed the bushing to escape. While waiting for Dave’s next visit to the desert I patched the prop, which had only two shallow gouges in the hub area.

Two weekends later Dave picked up a new starter and installed it in the mounting brackets. The new starter was too long. The end of it was right up against the prop. That meant another trip to the drawing board. Dave had learned of another starter that would work so he returned the one that was too long and bought a new one.

The new starter is small and compact and weighs 8 lbs. It is made by Ford and is used in race cars. By it’s diminutive size the starter looked like it would slip right into the mounting brackets, but not so. Apparently, nothing was going to be that easy with this installation! After cutting a bit off the mounting bracket, Dave tried to fit the starter again, but same story…it was still hanging up. Dave said to me, “I can cut a little off the corner of the starter itself and it will fit, but if I do that and it doesn’t work, we can’t take it back to the store. You will have a very pricey shelf ornament. What do I do ?” Knowing that we were just about out of options regarding starters I said to him, “make it fit”, and he did. 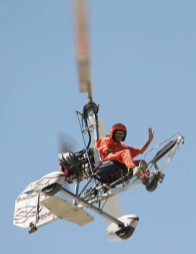 With the new starter securely in the McCulloch engine mounting brackets, (right,) Dave finished wiring up the battery and with great anticipation we once more pushed the gyro out to the run up pad and started that baby up. Oh how sweet it was. To just turn the switch on and push the starter button and have the mighty Mac come to life was a dream come true. I was like a kid with a new toy, I’d start the engine, let it run a minute or so, shut it down and start it up again, and again.

Next was the hang test. We had added about 30 lbs. to the gyro including the battery, so we needed to know what that had done to the CG. At 8 AM the next morning we took the gyro to a gateway on the field and hoisted the machine off the ground, and I climbed into the seat. It was determined that the nose down angle was 2 degrees so all was OK with the CG.

Teddy Udala had recently made some modifications to his gyro so we did a hang test on his gyro the same day. By the time both machines were done it was well over 100 degrees and too hot to fly. But that was OK. There will be cooler days to fly and I now have the freedom of starting my gyro when I choose to fly.

Having a starter will not only make it easier to start the McCulloch engine but will make it safer too. After so many years of having someone prop the engine for me I am having a little problem realizing I must start the engine myself now.

Life time habits are hard to break. An example here…I will get into the seat of the gyro, buckle up and prime the engine. Dave will say, “OK,” meaning ready to start, and I sit there for a few seconds wondering why he is taking so long to walk back and prop the engine. Then I feel like a dummy when it dawns on me that HE is waiting for ME to hit the start button! I’m sure that’s something that will come naturally in due time.

During the last week of September, 2009 at the Ken Brock Freedom Fly-in I flew my gyro for the first time (right, note battery on keel) with the new starter. The flight was very brief as the temperature that day was 103 degrees and our field elevation is 2990 ft. MSL. The density altitude was something else!

I only flew my gyro about two miles from my hangar to the flight line. Common sense said to wait for cooler weather to do flight testing to get the feel of the heavier weight of the gyro. In time the weather cooled to a more comfortable temperature and I put some time on the gyro and the new starter.

The difference I noticed was a slightly longer take off run but not objectionable. I think the longer run and the increased weight is a fair trade off for the convenience and safety. I am very grateful to Mark Carmouche for making the kit and to Dave Bacon for installing it for me.