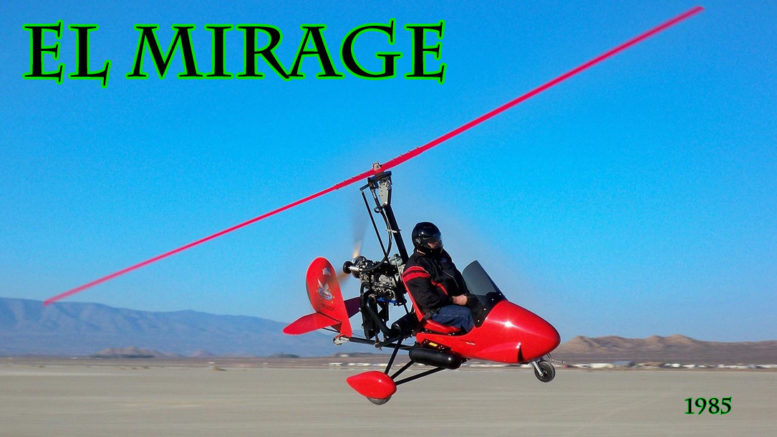 El Mirage Dry Lake is more often the home of jack rabbits, motorcycles and rat racers. It also boasts a smooth and flat surface of impressive dimensions that are irresistible to various devotees of the aeronautical arts.

The Labor Day weekend of 1985 once again served as sufficient excuse for many Popular Rotorcraft Association members to band together in pursuit of as much noise, air time and sky high shenanigans as possible at the El Mirage Fly In.

They must have set some kind of record this year, since the skies over El Mirage were filled practically nonstop with the beating blades of gyroplanes and the happy whines of a wide variety of two- and four-stroke engines. There seems to be a real resurgence in the popularity of the gyroplane.

These days, few subjects seem to draw as much mail as the new generation of gyroplanes spawned by Igor Bensen’s original “gyrocopter.” The Popular Rotorcraft Association, an organization run by and for the rotorcraft enthusiast, caters to people interested in gyroplanes or helicopters all one needs is a set of rotors.

Amazing “No-Prerotator” Take Off (second Half) At El Mirage

Although quite a few unique designs were present at the El Mirage Fly-In, the majority of aircraft were gyroplanes manufactured by the “Big Three” manufacturers that populate the amateur-built gyroplane business. This entire movement is very much the product of one man’s original invention.

Bensen Aircraft is the home of inventor Igor Bensen and the original Bensen gyrocopter. The well-known B-80 “gyrocopter” (the copyrighted trade name for the Bensen designed gyroplane) is replaced by the new B-85, powered by a Rotax 532 liquid-cooled engine. 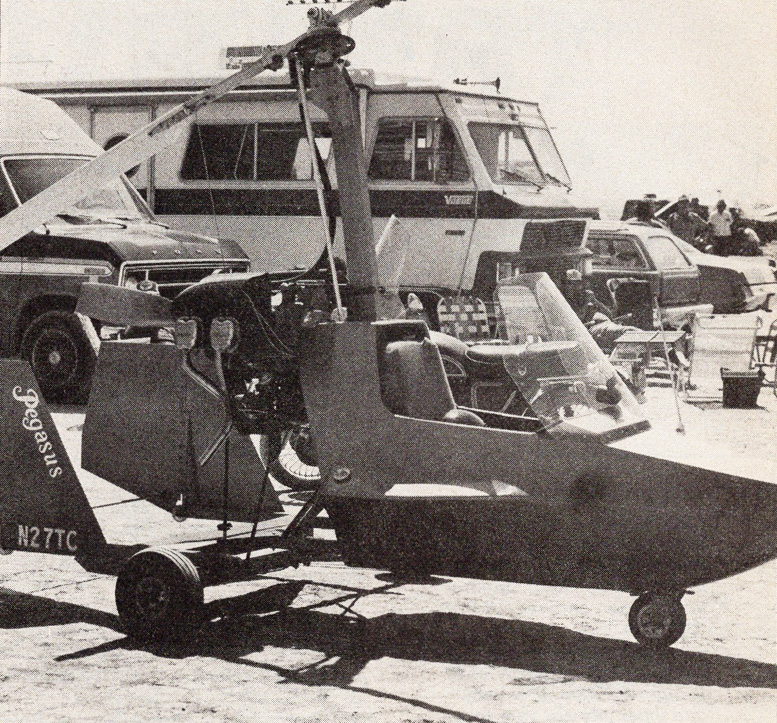 Previous models have been powered by either of two versions of the McCullough engine, originally designed for use in drones. Unfortunately, the McCullough is a rather loud performer and its power-to-weight ratio isn’t up to par. Thus. Bensen has moved to newer propulsion technology in response to customer demand.

Ken Brock’s KB-2 was very evident at El Mirage. The KB-2 still uses the McCullough engine for the basic aircraft, but a Volkswagen-powered version has been readily available. Those who doubt that the VW has the guts to do an effective job should have seen some of the ships flying on the hot. dry desert—they seemed to be doing very well.

Brock’s machines sport several unique features that have become quick favorites of the rotorcraft industry. His combination seat and tank is swiftly becoming standard equipment on many machines that were not even of his manufacture. A very well-designed control stick set-up seems to show up on many other aircraft as well.

LEFT: PRA President Ken Brock and his company, KB Manufacturing, produce gyors for either the McCullough or Volkswagen engines. RIGHT: A little morning maintenance before going out to fight the dust devils of El Mirage.

In the near future, Brock’s operation is about to produce a fixed-wing ultralight. As an encore to his ever-popular Quicksilver, Bob Lovejoy designed a very simple ultralight. Following Lovejoy’s tragic passing in an accident, Brock decided that the design still deserved a chance on the market and has fine-tuned it for production.

A few quick flights around the Dry Lake area convince me that Brock has done the right thing. The Avion is a very nice flying ultralight and a ball to play with. Dennis Fetter’s Air Command Manufacturing is something of the upstart in this growing industry but has quickly become one of the three major contending forces.

The basic Air Command model is a Rotax 447-powered design that retails at a very low price (less than $5,000 – 1985). Although the 447 version can qualify as an ultralight air vehicle, it doesn’t take too many heavy options to make registration and licensing a necessity—check with the nice folks at Air Command for details.

Other versions offer either the Rotax 503 engine or the liquid-cooled Rotax 532. The Air Command aircraft are available with a wide range of options, such as the ever-popular pre-rotators, rotorbrakes, hydraulic landing gear brakes, rotor tachs, lights and many other goodies.

LEFT: Creativity and ingenuity are very much alive and well among rotor-wing enthusiasts. RIGHT: It ain’t IFR, but it’ll get you there…

With this new interest in rotorcraft comes an amazing amount of new technology. New engines, new configurations and new construction materials are popping up like crazy. One of the most remarkable developments is the active marketing and successful use of Jim McCutcheon’s all-composite main rotor.

The McCutcheon Sky Wheel follows in the footsteps of the new high-tech chopper industry. Even more impressive is the fact that the McCutcheon rotor enjoys a great deal of success due to its rugged nature—there have been no failures to date, and some of these systems are really building up some air time.

McCutcheon’s rotor system adapts to most popular gyrocopter kits and offers only a few minor differences from the all-metal Bensen or Rotordyne rotor systems. The fiberglass rotor, apparently about 20 pounds heavier than its metallic counterpart requires a little more time to achieve speed for liftoff.

At the same time, the additional mass inertia is something of a built-in safety feature once in flight, due to its relatively greater reluctance to shed that all important rotor rpm. The McCutcheon rotor system is already included as standard equipment on all Air Command gyroplanes.

A very interesting aircraft showed up at the El Mirage Fly In in the form of Jim Eick’s autogyro. This design emulates the planform of such famous aircraft as the Pitcairn autogyro. The Eick autogyro sports a fuselage similar to a fixed-wing aircraft.

A Continental C-85 engine led off the front end, while two tandem seats filled up the midsection. The tail section offers a normal rudder and vertical stabilizer. A fixed horizontal stabilizer minus any evidence of a movable elevator seems to be the fuselage’s only clue to its “other than fixed-wing” inclinations.

A series of welded steel tubes extend from the fuselage’s mid-section to support a rotor head and main rotor. When one looks at this unusual creation, one can’t help but wonder how well it flies and as I found out; it does very well. 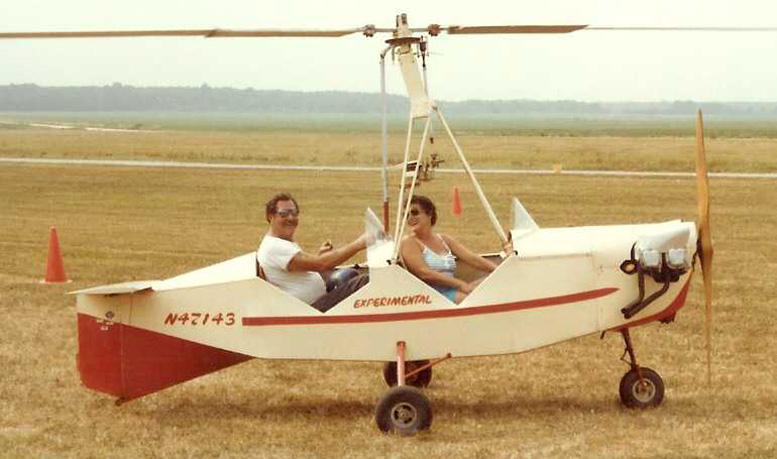 A wide variety of specially designed gyroplanes also attended the El Mirage Fly-In and showed off some of this business’ incredible talent. One of the meet’s big hits was a modification package developed by Paul Block of Vista. Calif. His retrofit package is capable of adapting a Rotax engine to either the Bensen or Brock designs.

Currently available with only the Rotax 447 and 503 air-cooled engines, the possibility of new power-plants has opened up to all those unwilling to tolerate the quirks espoused by the McCullough. The first run of 10 modification packages is already in the works, and Block reports that this system’s total weight compares quite favorably with the older McCullough installation.

Lest this meet appear all nuts and bolts, let me correct this misimpression right away. The El Mirage Dry Lake Fly-In is primarily a chance for rotor jockeys to get together and show off, have some fun, tell flying stories and see what’s new.

Flying, period. That’s what it’s all about. And the folks at El Mirage certainly racked it up.

PRA President Ken Brock sure knows how to put on a good El Mirage Fly In event and the entire meet was both safe and enjoyable. Brock also dragged out his unpowered two-place tow trainer and gave dozens of rides to PRA family members, spectators and friends. Late in the weekend.

Brock also hitched this two-place trainer to the back of a Super Cub and was towed aloft (solo) demonstrating something that only he does since the hazard of a rope break could cause problems for the rotor.

It was a masterful job of flying and was one of the El Mirage Fly In weekend’s highlights. A most unexpected visitor to the skies above El Mirage was Saturday’s 6:30a.m departure of the Space Shuttle. 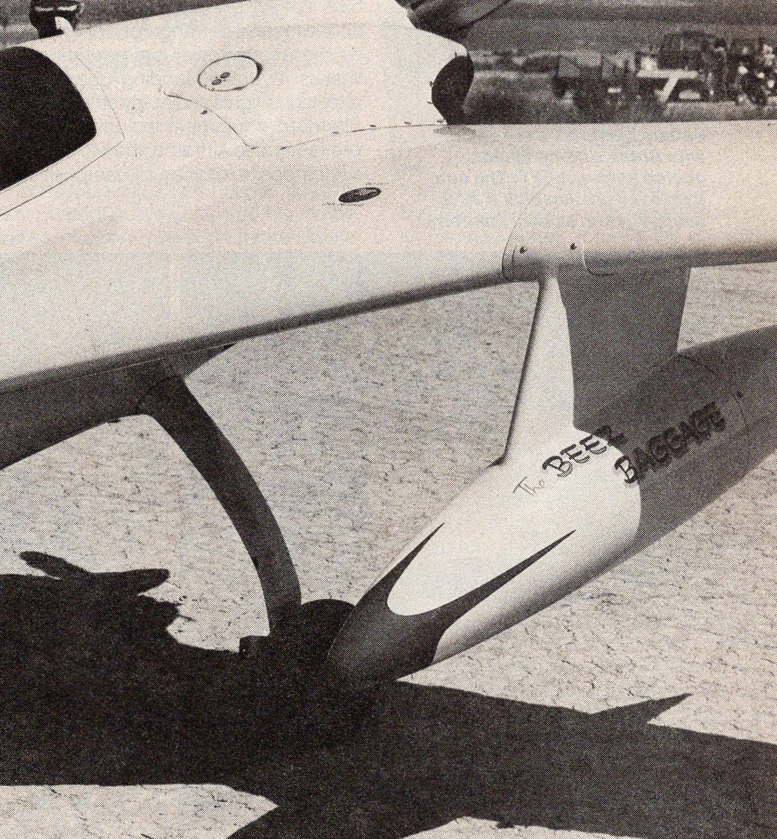 Although El Mirage was populated by the rotor-happy, they were nice enough to let fixed-wings drop in a for a visit.

Sitting atop its 747 transport vehicle, on its return to Florida, the Shuttle flew right over the Dry Lake just as the rotor gang got some dawn air time. It was quite a sight. The rotorcraft crowd does something better than any other special interest area; They maintain a sense of camaraderie.

You’ll rarely see a gyro pilot flying alone anymore—they all seem to do things together. This says a lot for the sport and even more for the people who pursue it. The rest of the business should take a good look at how these folks stick together. It’s the way that sport aviation used to be and should try to be once again. 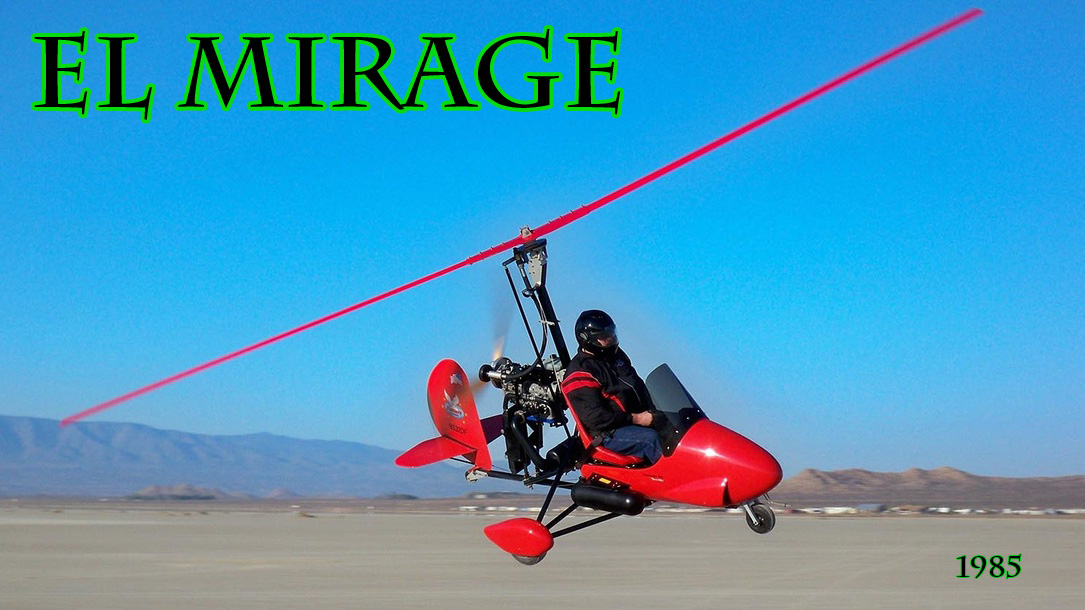