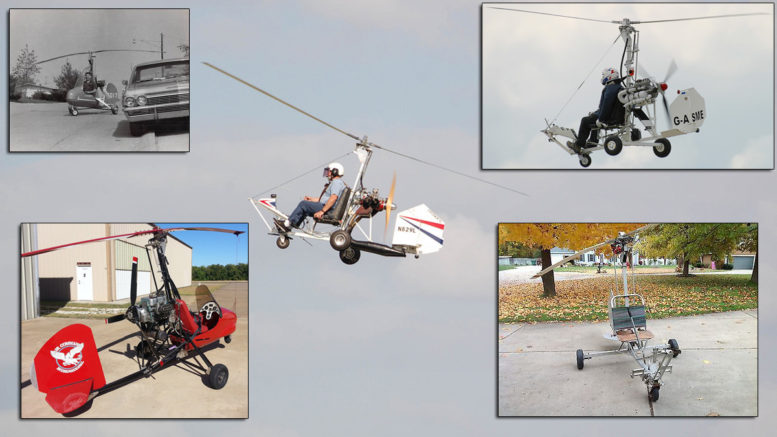 PAGE SHAMBURGER tells it as it was at Raleigh-Durham during the PRA’s annual fly-in/trailer-in show. Quite an (un)convention!

Bob Nesbit flew his “Bandido” from his Charlotte home, an estimated 150 miles following highways to Chapel Hill, thence cross country to Bensen Boondocks — as RDU is called in the whirling group.

Escorted in by a radio-equipped Cessna, Bob and his Bandido averaged 60-mph on the trip. He stopped 5 times and likely is still picking bugs out of his teeth.

During the affair when the tower operator answered Eastern Airlines 727’s request for landing instructions with “You’re number three to follow a Gyrocopter” every body in central North Carolina heard the retort, “Behind the WHAT?”

Nearly a thousand people from 31 states knew what because they had hauled in 50 eggbeaters. Truck drivers and trailer pullers were thrilled that Nesbit had broken the fly-in distance barrier.

And he landed in winds gusting up to 30 knots. Bandido boasts no windshield nor fuselage; it uses at 90 hp McCulloch for engine power. Nesbit has over 85 hours flying Gyrocopters.

New was a Mini-copter owned by All American Engineering of Wilmington (Dela). This company, best known for arrestor gears and air-to-air recovery equipment, is much interested in the potential sales for certified machines.

Assembled from a kit made by Rotorcraft of South Africa, the Mini-copter has a fiberglass fuselage and other refinements not standard in Bensen’s Gyrocopters. Designated the MK-11, AAE’s has a gross of 550 pounds; empty 330 pounds.

Maximum speed, 90-mph, minimum, 25; this from 72 McCulloch horses. A flex drive from the engine turns the 21-foot dia. rotor. On 7 gallons of fuel the Mini-copter has a 150 mile range; a glass tube shows fuel level.

The craft has individual wheel brakes. Joe Barkley, All American’s test pilot, has 6600 hours of fixed wing time; last March he the Mini-copter and rotorcraft flying. He thinks the machine is fun and “quite safe.”

Besides a partial enclosure and windscreen, the Mini-copter has some controls not found on most Gyrocopters. On the left side, level with and forward of the pilot’s seat is a red half-moon shaped throttle handle.

LEFT: Sweepstakes winner (most points in all events) Micky Farris in fly-by with Tweety Bird gyrocopter.
RIGHT: Bill Brown’s VW powerplant is standard 65-hp; from one Bug to another, you might say?

Towards the rear of the seat are some unusual controls: two black sticks—one a parking brake, the other a RSU (rotor speed-up)—then another red handle. This is the trim adjustment. With it the pilot can pre-load rotor stick forces for optimum stability at various weights and speeds.

A button on the floor-mounted stick gives the pilot a choice of readings on his tach. Normally, the tachometer reads the engine prop rpm on the lower side of the dial. By depressing the button connection is made through automotive distributor points and he gets rotor blade rpm on the top side of the dial. Neat.

All American’s position on distributorship of the Mini-copters? Said Tom McBride, “Certification will cost in the neighborhood of $50,000. We’re trying to feel the market’s pulse. Is there a sufficient demand for this type of one-man machine to spend that kind of money?” (Igor Bensen, and others, would like to have that answer, too.)

Mini-copter, in the hands of Barkley, lifted off precisely on the line in the take-off competition. Joe won first place, Sportsman Category, which is the division for Gyrocopter pilots with less than 50 hours in the machine. Professional sportsmen, or sportsmen-sportsmen? Who’s to say?

“Two hair-raising emergency landings in soy bean fields from failures; first, the carburetor float broke off, then the prop disentegrated. That was enough for me, and I changed to the VW engine. I was a bit concerned, because of my weight, with 65 horses instead of 72, but I’ve found my machine still has enough zip” (B.J. weighs 192 pounds).

He added, …”Herbert Troyer, in Michigan, made’ my prop, and it’s just great. He’s a genius with props. As far as any troubles with the VW engine, I have 50 hours on it now, and all with no problems.”

B.J. doesn’t build any part he feels not capable of; for instance, he purchased his rotor blades in finished form from Bensen. Taylor prefers wood blades for more lift, and they need glue. It’s not easy for him to handle that.

Taylor’s VW powerplant came out of a car; it’s standard except for a tapered crankshaft. The other machining necessary? Cut down both the hub and flywheel until they’re just large enough to hold in oil.

In the 50 hours, his engine shows no signs of pre-ignition (which would be an indication of overheating) so, in his opinion, the VW presents no cooling problems. Bill Brown, another VW advocate, claims a cruise of between 50 to 55-mph. Ken Brock was voted top pilot by all the other Gyro pilots.

He climaxed the two-day meeting with an amazing airshow. Brock, from Anaheim (Calif), flew his black and chrome 90-hp Gyrocopter through a series of spirals, high-speed dashes, and dead stick landings.

On the 29th Olav Bergeen of New York had finally taken to the air in his Gyrocopter. Grounded earlier by safety inspectors (due to some questions on his rotor blades) Bergeen zipped off on a take-off run with an engine denitely misfiring.

Turning downwind, with only about 20 feet of altitude, the machine settled back to the ground. It hit first on its tail wheel, then the mains, finally the nose wheel dug in. Over the Gyro flipped spewing bits and pieces in all directions.

Bergeen’s seat belt held, and though upside down in a severely damaged Gyro, he was not scratched. As he says, “Norwegian heads, they’re hard as hell.” Ed Hatch of Whittier (Calif) was not as fortunate. 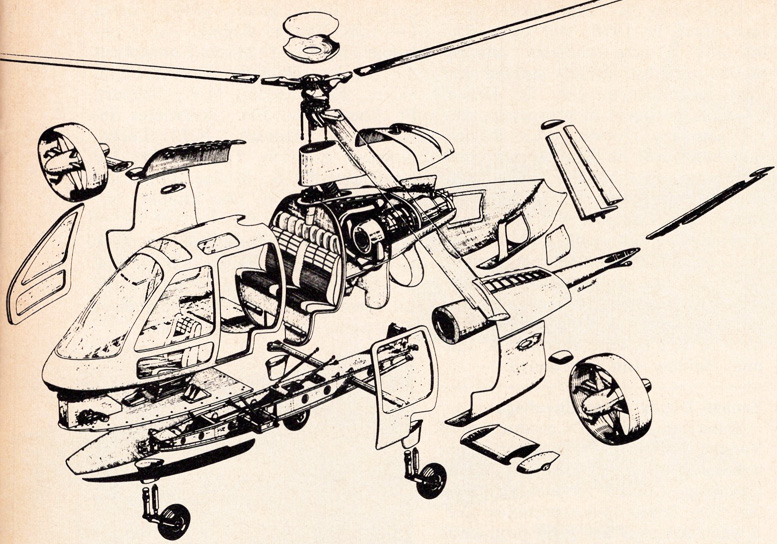 On a landing roll, a gust of wind got him or perhaps a wheel hit a stone—the answer is not yet known. Ed’s beautifully made two-tone green “Hedge hopper” chart wheeled and landed upside down catching Ed’s hand beneath a demolished rotor blade.

Later that day after one hand had to be amputated, his comment from the hospital was, “I’m so sorry to break the safety record of PRA.” But break the record, he did not. There have been accidents before.

But credit Igor Bensen and his staff with doing everything possible to protect the safety of the 8,500 PRA members, the 2,000 Bensen gyrocopter machine owners, and PRA meet participants.

As any kit designer, fixed or rotary wing, will tell you, if only homebuilders would stick exactly to plans and learn to fly their machines as instructed in the manuals, accidents would be even fewer.

With a membership increase of nearly 50% during the past 12 months, Popular Rotorcraft Association is 8,500 strong now. That’s a whole lot of “bug” interest. This latest Eastern meet compared to the one two years ago indicated activity is really branching out.

In 1966 at Raleigh most of the machines were carbon copies of each other. This time different engines, rotor heads, landing gears were sprouting out all over. That’s really the name of the experimental aircraft game, isn’t it? 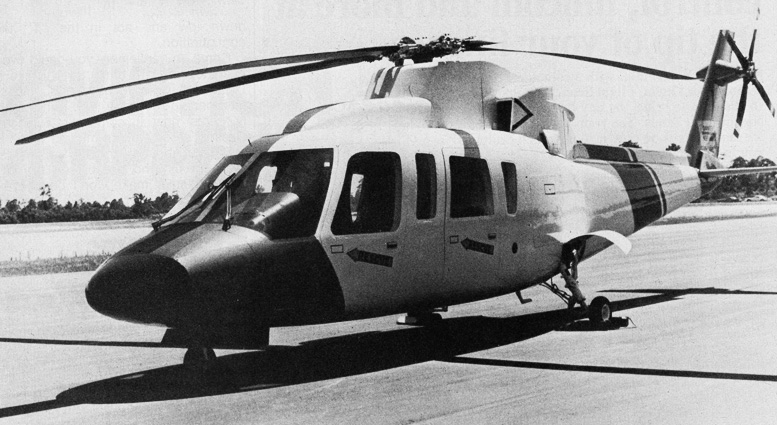 Sikorsky unveiled the mock-up of its entry into the U.S. Coast Guard competition for a Short Range Recovery (SRR) vehicle recently. The USCG requires a helicopter that has a cruise speed of 100 knots and a payload of 2,000 lbs. 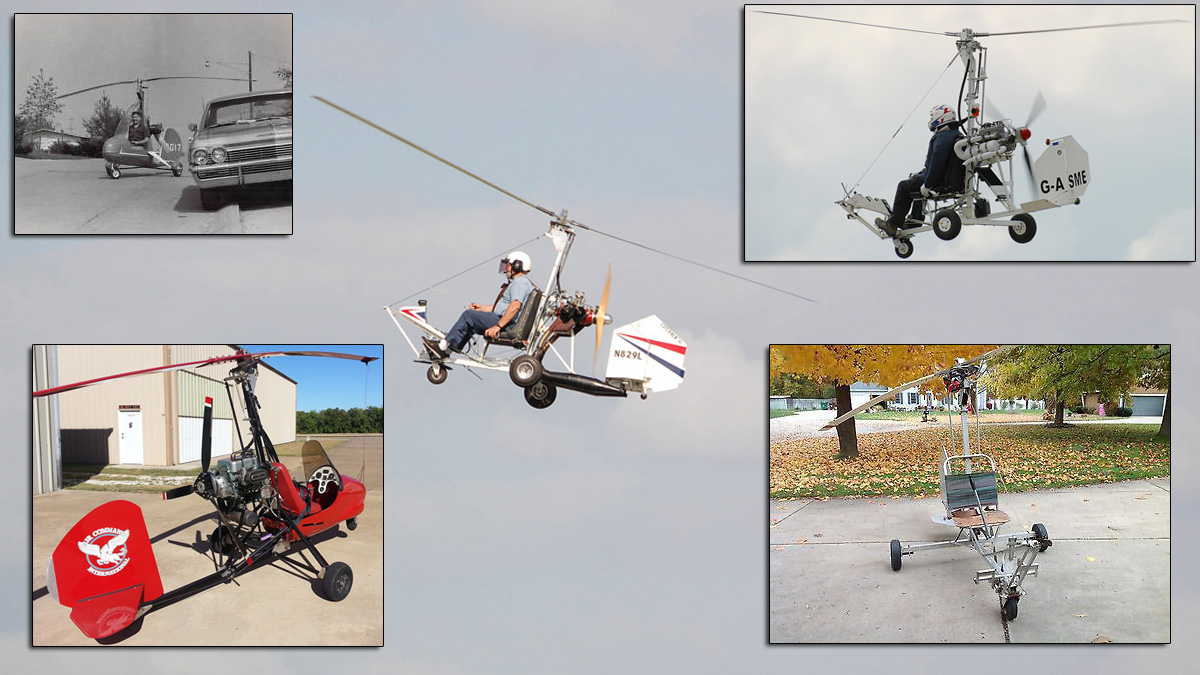 Article Name
Spry Rotorcraft at Raleigh Durham Fly In
Description
Early day Raleigh-Durham airport rotorcraft fly in as experienced by Page Shamburger. It was back in these times the gyrocopter was referred to as a "Mini-copter".
Author
Page Shamburger
SHARE TWEET PIN SHARE