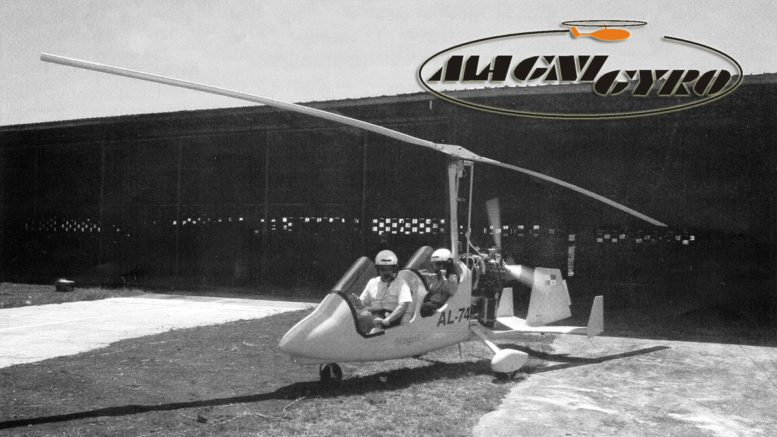 A few months ago I got the idea that I’d like to fly from the Atlantic to the Pacific Ocean. This notion never even occurred to me to try until I started flying the Magni M-16 gyroplane. From my first intro flight with Greg Gremminger I was hooked – forget about airplanes, helicopters or ultralights.

Gyros are my world now.

My ocean-to-ocean flight began on March 30,2008. It was a beautiful day-not a cloud in the sky. My wife Mari was my passenger and my photographer. She’s an excellent passenger, and even though flying is not her sport, she supports my hobby. We packed light and headed on our way.

As our journey began, my thoughts wandered back to 1985 when, at 16, my late father sent me to the American Language Academy at Pueblo, Colorado to learn English. I would cut classes to take flying lessons.

My Dad scolded me, but what a smile came over him when he saw my fixed wing private pilot’s license. He, too, was a pilot, and we flew for many years together. In 1996, while working at my father’s business, I had to visit some very small towns that had no airports.

There were two alternatives, driving a car for hours or renting a helicopter. Flying, of course, was the only way to go. The helicopter plot, a certified flight instructor, said the only way he would fly me was if I would agree to take flying lessons with him. 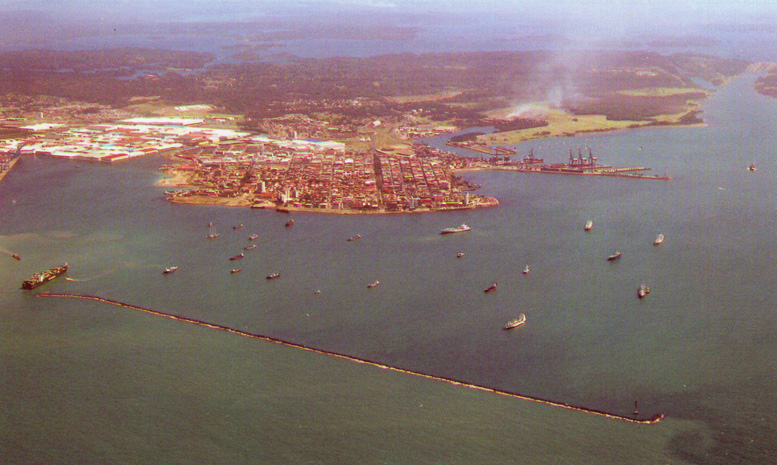 Colon City And Canal Entrance from the Atlantic.

No doubt my dad was behind this because he was already flying his new Bell Bill. I was “forced” to get my helicopter license. What cruelty! Back to Mari’s and my flight! We flew at 3,000 feet and the earth below at times looked like a triple canopy jungle.

The colors and different shades of green are hard to capture on camera, but to the human eye, it is amazing. The Atlantic Ocean waters turn from green to blue. The clouds over the mountains foreshadow rain. The feeling of being alone rewards you in so many ways.

Whether you’re flying over water or over a jungle, there is always the question of what to do if the engine quits. Even if you have a transponder and are on a controller’s scope, it’s good practice to think about what you would do.

Always be aware of your position, and don’t totally rely on your GPS.

On this special trip I had to practice my pilotage, something most pilots have forgotten or maybe didn’t learn well at all. The old days of the VOR have now been replaced with satellites and high-tech navigation devices.

All that’s nice, however, the old fashioned time and distance flying is good to keep polished. I’m glad I did. At one point in the middle of nowhere, my GPS showed the message “no satellites” for five minutes. Thanks to my nav skills and my flight instructor Kenneth, I knew where I was.

The ocean-to-ocean flight was mesmerizing and was over before we knew it. The dream was fulfilled. We had traveled from the Pacific to the Atlantic in one day, non-stop.

Did I mention I live in Panama?

On a clear day at altitude, you can see from one coast to the other. We took off from Calzada Larga airstrip in the Republic of Panama towards the south. Then we flew over Taboga Island, which is 10nm from Marcos Gelabert airport (formerly Albrook Air Force Station).

We then headed north to the Atlantic Ocean and returned to Calzada. The entire trip took one hour, forty-five minutes. I had joked with Greg about flying non-stop from the Pacific to the Atlantic, but had never done it. 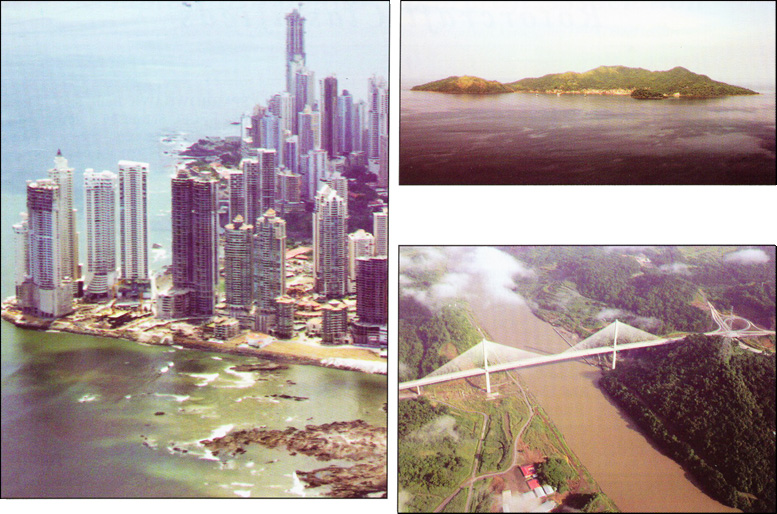 I’ve been all over central and western parts of Panama, but never crossed from south to north. And flying over the triple canopy jungle is really something out of this world. Greg and his wife Steph can tell you how beautiful it is to fly in Panama, although flying over dense terrain does take some getting used to.

When I got my Magni in late November 07, I invited Greg and Steph to travel to Panama. Greg put the rotor together; checked everything out; arid test flew the ship. We flew many hours before I soloed. I’m not kidding when I say that was one of the happiest days of my life.

I’m glad I discovered the Magni. Flying in Panama got very expensive in the late 90s so I sold my Cessna 172 and began flying ultralights. But I was always curious about gyroplanes. After years of research, I contacted Greg who gave me an introductory lesson in August, 2007. I signed on the dotted line just a few hours later.

All I can say about Magni gyros is that they are safe if you fly by the book, as you should all aircraft. It handles turbulence very well. I spend most of the time doing touch and goes. After all, practice makes perfect. But I have flown as far as 100nm from my home air strip.

If you ask me which months are better to fly in Panama, I would say all 12, but the rainy season is from April to December. The rest of the year is dry and windy, but that’s no problem for the Magni. For those of you who would like to follow my trip in a flight simulator you can see my track on the map, however I invite you to Panama and do it for real. 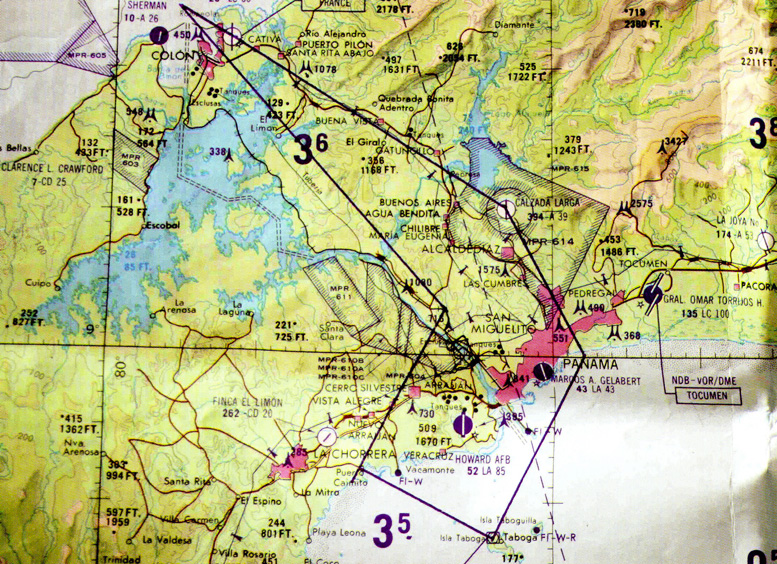 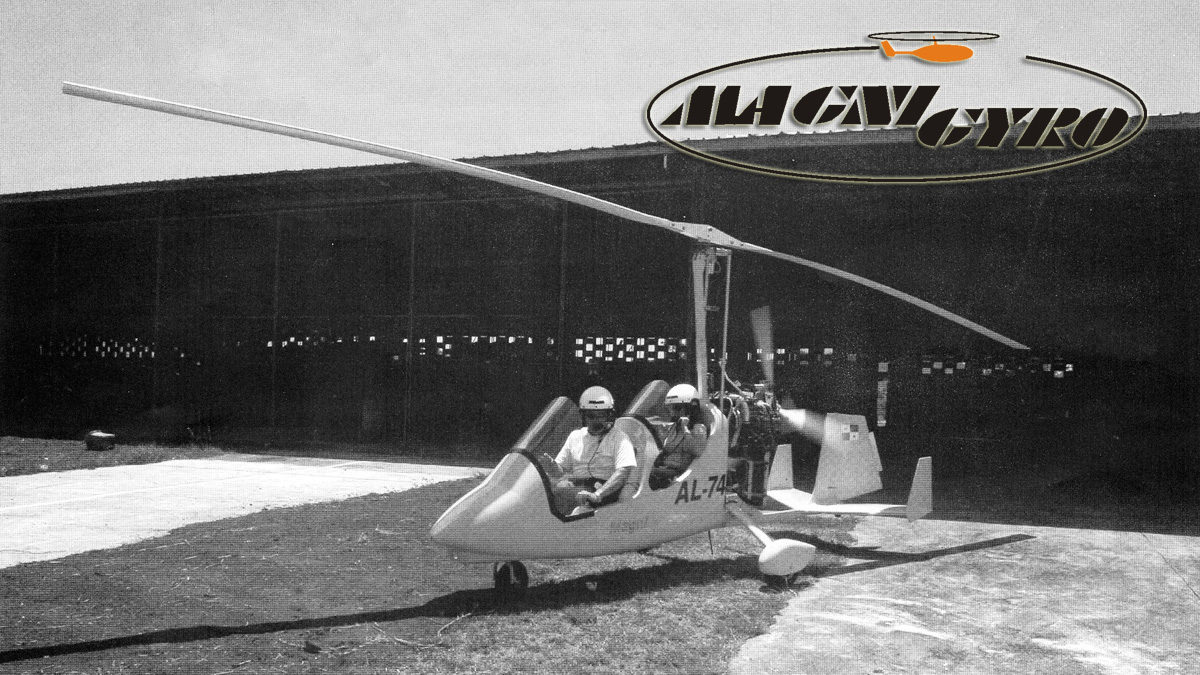