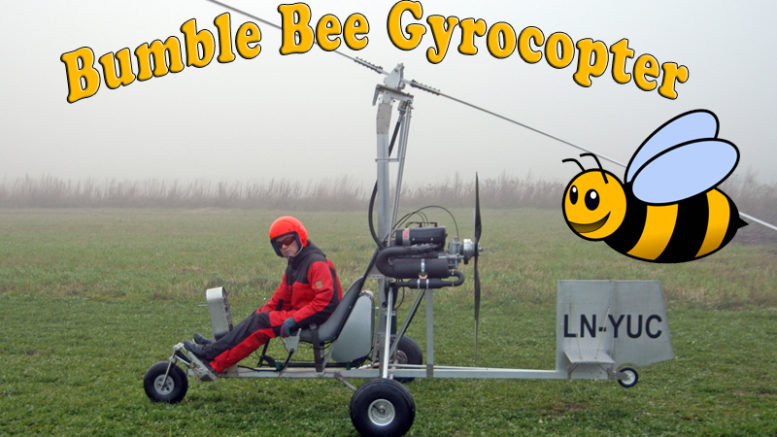 In 1982, the production of light, two stroke engines for snow-mobiles allowed aircraft enthusiasts to build light aircraft called ultralights. These two stroke engines usually weighed about one pound per horse power whereas the four stroke aircraft engines weigh about 2 pounds per horsepower, perfect for the Bumble Bee Gyrocopter. However, such engines as the Kawasaki and Rotax two strokes were not reliable.

It was not a question of if they would seize but a question of when. In fact some early ultralight pilot had up to 5 engine outs in flight. The ultralights had low wing loading and it was easy for pilots to glide down and land. The gyroplane is even easier to land, power off, because it can be set down at zero forward speed.

By 1983, the ultralight aircraft movement was in full swing and it was the new engines that allowed them to be built. It was at this time that many people contacted me and asked me to design an ultralight gyroplane. When I had an accident in my Condor and the doctor told me that I could not lift more than 15 pounds because of my broken back, I knew that I had to design and build an ultralight gyroplane for which the blades did not weight more than 12 lbs each.

I knew that good blades did not exist for an ultralight gyroplane and I designed a large 23 foot diameter rotor with 7.00 inch chord blades. A leading edge extrusion made out 2024-T8511 aluminum was chosen and the blades were covered with two layers of fiberglass to give a smooth and exact surface. A foam core was used to carry the shear loads from the trailing edge to the leading edge. The blades had a weight of 12 lbs which included a one pound tip weight. These were the lightest blades that have ever been built.

A Kawasaki 440 with 39 hp was selected and a large 60 inch two bladed wood propeller was used. It only took a half a year to design and build the new gyroplane. Appropriately, I named it the “Bumble Bee.” The Bumble Bee Gyrocopter you see does not look like it can fly. But since it does not know this, it not only flies, but does so very well!” Allen Tatarian test flew the Bumble Bee at Hollister, CA in 1984. It flew well.

It had a powerful rotor pre-rotator with which to spin the blades up to 300 rpm prior to take off. Take off distance was 235 feet on calm, no wind day and it could carry a 250 pound person (me). With its very low disc loading of 0.8 pounds per square feet it would climb at 1,500 fpm and that was great performance for any gyroplane. But what was even more important, its empty weight of 190 lbs classified it as the world’s first ultralight gyroplane.

An ultralight is classified as an aircraft having an empty weight of no more than 254 lbs with a maximum speed of 63 mph. Other people had made the claim that their gyros were ultralight, but most in fact were not due to the weight of the blades and power plants.

Being an ultralight meant that anyone could fly the Bumble Bee without a pilot’s license and advertising it as such would put me into the same spot as Igor Bensen and his Gyrocopter. He had promoted his Gyrocopter as being so easy to fly that anyone could teach themselves. This coupled with the lack of available training would in later years put Bensen in the position of many times defending himself and his machine.

I certainly did not want to repeat that mistake. I insisted that anyone who would purchase a Bumble Bee Gyrocopter kit or the plans would be qualified for a free check ride in my two place Sportster and many people took me up on my offer. If I did not have my two place Sportster, I would have never designed, built or flown the Bumble Bee. It would simply have been too big a risk.

About 60 Gyrobees and 12 Honeybees have been built. One builder of a Bumble Bee has flown his aircraft up to 12,500 feet and another pilot has logged over 650 hours. You can also download a short video of both the Sportster (a two place gyroplane I designed in 1968) and Bumble Bee in flight from my web site at www.aircraftdesigns.com.

Because of its safety record, the Sportster (Designed and built and flown by Martin Hollmann in 1974) was the first experimental, two place rotorcraft (gyroplane or helicopter) to be certified in Canada and most other countries in the world. The Sportster was a big success in that it ushered in the era of safe flight training in a two place gyroplane and it motivated others to follow. The Bumble Bee Gyrocopter, on the other hand has the unique distinction of being the world’s first true “ultralight” gyroplane and it is one of the most copied gyroplanes in the world today.

In retrospect, the greatest thrill in designing and building the Sportster and Bumble Bee Gyrocopter was meeting so many people and the fun that I had in giving these people the thrill of safely flying a gyroplane.

In 1983, about 25 years ago, I designed, built and flew the world’s first ultralight gyroplane called the Bumble Bee which has been copied by others and there are still a number Bumble Bees flying. Figure 1 shows Murray Goossen of Canada in his gyro.

He wrote, “It flies very nicely and have flown it for 650 hours”. Another fellow, Robert Weyland wrote, “I’ve found that the best time to fly the Bumble Bee is when the wind is blowing about 20 to 25 mph”.

I’ve flown in some gusty winds and I am really impressed the way a Bumble Bee handles wind. I was flying in a 20 mph wind and was able to hover over a spot at about 20 feet above the ground for 5 minutes. It was incredibly easy. I really enjoy flying it.

What let me design what is recognized as the world’s lightest single seat gyroplane was the use of a little engineering. The first Bumble Bee secret was the availability of light weight, two stroke engines. The Bumble Bee used a Kawasaki TA440-A engine with a belt reduction drive, which weighed less than 40 lbs and put out 38.5 hp at 3200 rpm at the prop.

FIGURE 1. Murray Goossen of Canada has over 650 hrs on his Bumble Bee.

The 6061-T6 aluminum is less costly and easier to extrude. The strong 2024-T8511 aluminum allows using a tip weight of 0.68 lbs and allows making the blades light. Each blade weighed a total of 12 lbs.

The trailing edge of the blade was hot wire cut Styrofoam covered with layers of fiberglass as shown in Figure 2. A NACA 8-H-12 airfoil was used for the blades because, according to Ref. 4, the airfoil has a lower drag coefficient than the NACA 0012 and the NACA 23012 airfoil for both rough and smooth surfaces. 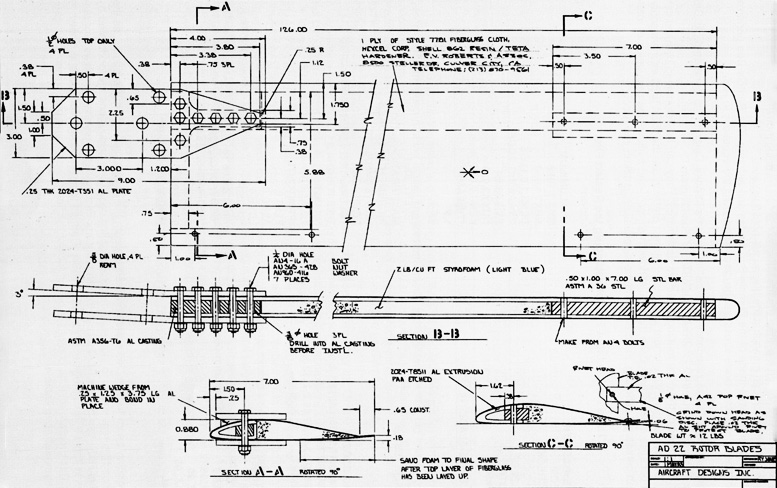 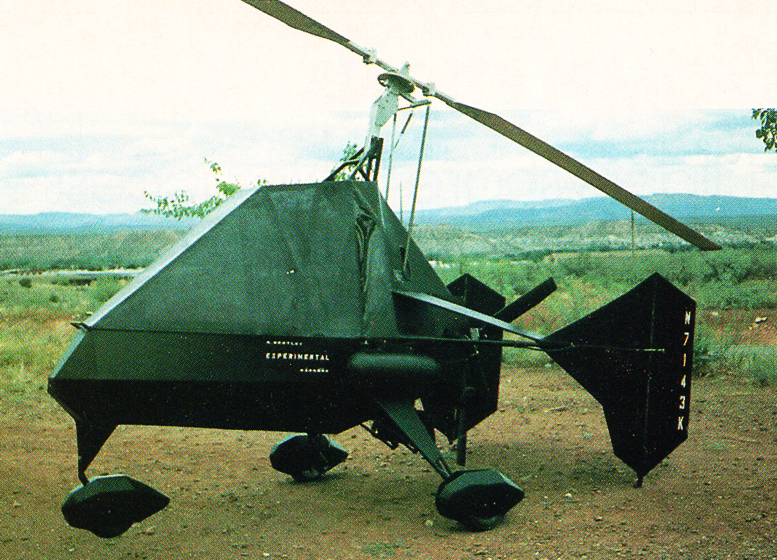 Enclosed is a photo of the Man­goos Stealth, my two-place gyroplane I started design work on it on January 1, 1990, and by January 18, was ready to start construction. I completed the Stealth on July 12, 1990. The next day, Friday the 13th, the air­ worthiness inspection was done First flight was delayed until August 3, 1990, because I was attending a rotor­ craft event in Texas.

Since then, I have logged 54 hours in it and taken up 33 passengers. I’ve had it up to an altitude of 10,000 feet MSL and flown at speeds in excess of 100 mph. The Mangoos Stealth flies well and is very stable—even in winds better than 40 mph. The airframe is welded 4130 steel tubing covered with Stits Poly Fiber.

The powerplant is a Rotax 583 with variable-port exhausts that turns a 60-inch IVO propeller. Differential disk brakes provide directional con­trol while taxiing. Empty weight, including battery, electric starter and electric pre-rotator, is 370 pounds. Maximum gross weight is 800 pounds. Building the Mangoos Stealth was a lot of hard work, but one of the most rewarding experiences I’ve ever had.

The Bumble Bee has a shock absorption landing gear stroke of 2.25 in­ches compared to about 0.5 inches on the Commander, and it can take the same landing abuse. Furthermore, the Bee can take off in shorter distances than the Commander can.

Also, I think I should warn the public about some of the negative aspects of the gyro flight, such as zero G’s and por­poising. Martin Hollmann, President Aircraft Designs Inc. Cupertino, California