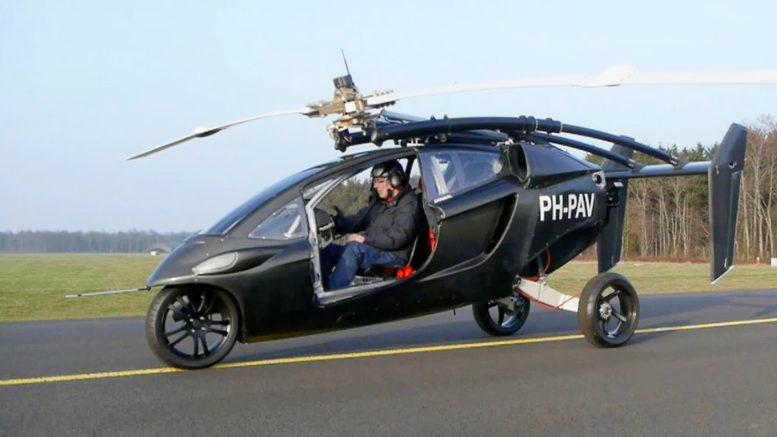 Developing a successful roadable gyrocopter flying machine has been a goal of a great many top-notch designers throughout the years. For airplanes, the main obstacle remained the necessity of having prepared airfields for landings and takeoffs.

The Gyrocopter eliminated this obstacle. I demonstrated this on many occasions, as was reported in the previous installment. Not all went smoothly during our first demonstration in Raleigh.

I lived then in a mobile home next to our factory on the airport, so the photographers had no trouble getting their first scenes of the “typical future Gyro owner” leaving his house, starting the engine and taxiing away to the takeoff spot. Things got sticky beyond that point.

Early morning sky late in summer in that area is usually full of low-flying “scud” type clouds, which closed down Raleigh-Durham airport, even to incoming “instrument” flights. When I called the tower for clearance to take off, it was denied.

With a horde of photographers and newsmen on my tail, I could not tell the news media to go home and come back later. Something had to be done. I offered to taxi away on the highway three miles out and take off quite legally outside of the airport’s control zone, but the newsmen wouldn’t have it.

One of them from LIFE magazine, who had accumulated much helicopter flying experience in Korea, volunteered to go up to the control tower to see if he could change their minds. 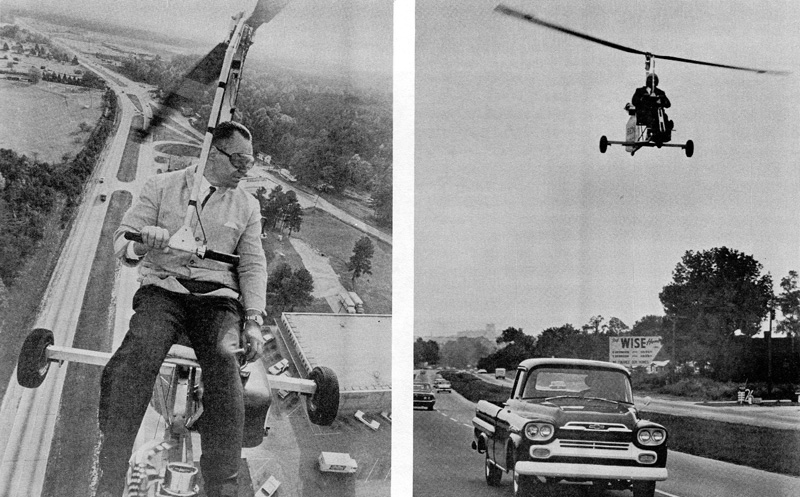 LEFT: Flying the Gyrocopter above the highway traffic, straight “as the c row flies.” avoiding traffic lights and traffic jams. It is the quickest way to get “door-to-door” transportation if your craft is also roadable.
RIGHT: Preparing to land the Gyro glides down power-off into a vacant parking lot on the outskirts of the city.

He argued with the chief Controller that rotorcraft did not need a 300-foot ceiling and a half-mile visibility as airplanes do to fly safely, and cited his experiences flying gyrocopters in Korea in nearly zero-zero weather. The Gyrocopter, he said, could land “on a dime” in emergency without endangering anyone’s safety.

The Controller was adamant and cited chapter and verse in CAR regulations that forbade that kind of flying in controlled zones. By that time, three or four other newsmen drifted into the tower and all pleaded with him to let me take off.

The man was quite embarrassed, because he couldn’t help but agree with the LIFE reporter’s arguments, but still felt obliged to play it safe and go by “the book.” Finally, before pleading became confrontation with the press, the Controller agreed to clear me for the takeoff under a “Special VFR Rule”.

This rule allows aircraft to leave the airport in instrument weather, but not to come back, even in emergency. I assured him that I would not want to come back anyway, and could make a safe power-off landing almost anywhere between the airport and Raleigh.

This being settled, I proceeded to take off from the main runway, which was otherwise “grounded” to all other traffic. The flight to Raleigh was quite uneventful, as I flew directly above the familiar access roads from the airport to the city.

At no time did I fee! uneasy about the safety of that flight. Certainly no more so than when taking off in an airplane , even in clear weather, while crossing the threshold of the airport.

This kind of cross-country Gyro flying has been repeated countless times after that first flight, and later received a special name: “Gyro IFR.” In this case IFR does not stand for “Instrument Flight Rules,” but more appropriately, “I Follow Roads.” Arriving over the outskirts of Raleigh, I had to fly over the State Prison.

It so happened that at that moment the inmates were released into the yard and were milling around, jogging, playing Softball, etc. Boy! You should have seen the wild enthusiastic welcome I got from them!

As if by a signal, prisoners all started waving their arms, dropped everything and motioned for me to land. I waved back, circled around once, but elected not to accept their invitation.

Actually, I was killing time, because the photographers had not yet arrived at our pre-arranged destination, a vacant parking lot at the N.C. State Fair. 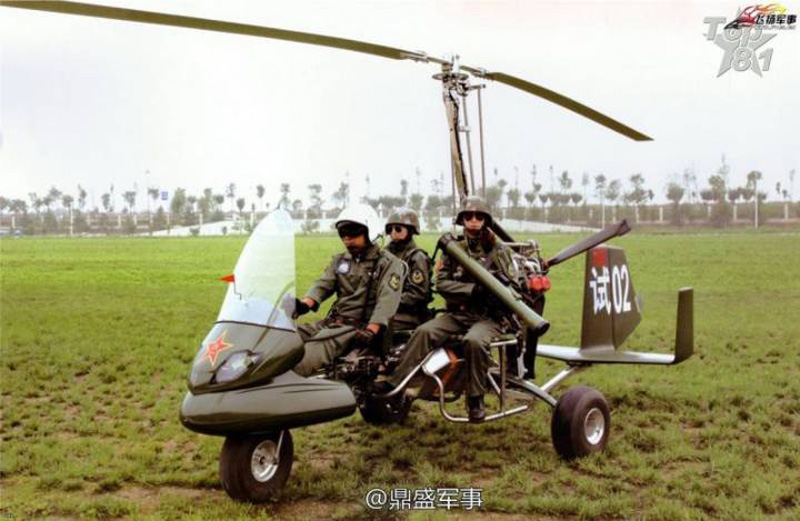 It seems that Gyrocopters always arrive at the destination ahead of automobile traffic, even though this time the newsmen had a special police escort. Finally, I saw the cavalcade of cars pull into the parking lot, and made two more circles above them to give them time to set up their cameras.

Wind being too light at 7:00 in the morning to be of much concern for the Gyro, I elected to land on a slight uphill slope to obtain the shortest possible landing roll. I motioned to the cameramen on the downwind leg that I was coming in for a landing, did a 180°, throttled back, retarded the spark and “greased it in” smartly right in front of the cameras, with less than 20 feet of ground roll.

The group by that time had swelled to something like 40 people and, sure enough, one TV cameraman missed the landing. Another one wanted to change his film from black-and-white to color and shoot again, so pretty soon I heard a chorus, “Can you fly again and make one more landing?” 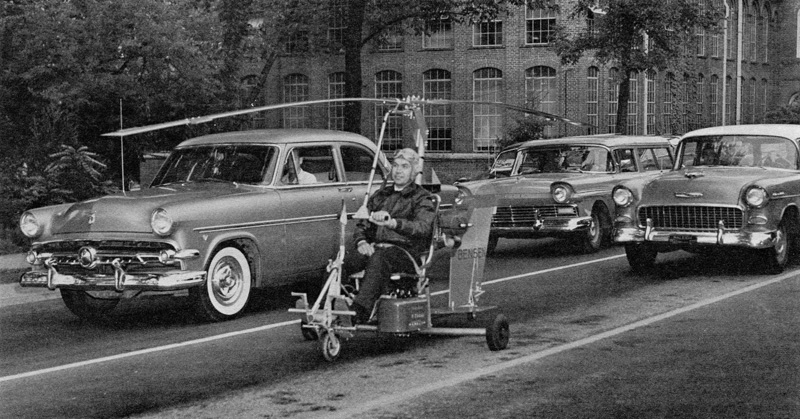 Stopping the rotor in fore-and-aft position, the Gyro is driven on the highway into the city along with other commuters. . . and the Gyro holds its own very well on the streets with city traffic.

I should have said NO, and held my ground. Usually, this is how the trouble begins. Photographers always beg for “one more” shot, and unless you have rehearsed it well, you might be asked to do something new. Your cardinal rule should be NEVER to do for photographers anything you have not done before, and you must be absolutely sure you can perform it flawlessly.

In this case, I was persuaded to take off from the parking lot without a previous practice run. I elected to take off downwind, because it was also downslope and had open country beyond. Actually, upwind takeoff was quite impossible because it was one of those dead-end alleys with high obstructions and buildings in front.

Gyro pilots would appreciate the challenge of my chosen downwind takeoff: with a hand-starting rotor, going downwind, and only a 42hp Nelson engine on board; it just wasn’t eager to fly.

After what seemed like a mile-long run, I finally coaxed if off the ground, when suddenly my eyes caught a glimpse of where I was heading — straight into a 40,000-volt transmission powerline.

If you have ever done some “frantic thinking” in your life, you know it was one or those moments. Was my initial judgment faulty, or was some new element interfering?

As my mind was frantically scanning all options, I realized that my engine didn’t seem to turn as fast as before, and my climb angle was too shallow. With lightning speed, I realized what happened — the spark retard lever was left in “idle” position.

With equal lightning speed, I rammed it into the “full advance.” The little Nelson responded arid gave a roar like a lion. With transmission wires coming closer and closer, the diminutive B-7M Gyro fairly pole-vaulted over them in one mighty leap, clearing the top wire by no more than five feet. Phew! Never again . . .

The second landing was as good as the first one, but I was in no mood to fly any more.

Fortunately, the newsmen got their flight pictures, and were ready for the “roadable” portion of the demonstration. I tied the rotor in fore-and-aft position with an 18-cent Sears & Roebuck camping strap, fired up the engine and proceeded to drive out on the road.

LEFT: sight of a Gyrocopter driving on city streets invariably attracts attention and brings cheers and smiles from the onlookers.
RIGHT: The B-7M Gyrocopter fit neatly on the tailgate of a Ford station wagon. City chores completed, Dr. Bensen is met by his wife, Mary, (behind the car), and both return home after having a lunch downtown. Note the year on car’s license plates: 1957.

Since the roadable gyrocopter had no license plates, a special dispensation and escort was provided by the city police. In fact, the Chief of Police himself led the procession on his motorcycle, lights flashing and pushing all traffic aside.

At one time, he ran right through a red light on one of the busiest intersections in town, but I stopped like any law-obedient citizen and waited until the light changed to green.

En route, spectators ranged from cheering to incredulous. Movies recorded one man, with his mouth open, falling off the edge of a sidewalk. Another drove his car into a ditch. Many waved and cheered as at a Christmas parade.

Finally, we pulled into the Cameron Village, the world’s first shopping center, and I stopped at a service station to refuel. The Phillips 66 gas station, appropriately enough, was selling “Flite Fuel,” and my B-7M Gyro fuel tank required two gallons.

Back in the ’50s, before the fuel crunch, such minuscule fuel consumption was thought to be amusing and drew smiles from the newsmen and spectators. It cost me all of 75-cents to refuel. The next stop was at a drive-in bank, then at the Post Office, and down the list, just as it was planned in the scenario.

The Nelson engine, with its battery ignition, cockpit-startable recoil starter and spark retard, didn’t miss a beat and gave splendid account of itself in ground traffic. It was fully comparable in reliability to auto engines, even though it used a 2-stroke cycle.

Since the B-7M Gyrocopter had an empty weight of only 186 lbs., my wife, Mary, and I had no difficulty in lifting it up by the axle and loading it onto the tailgate of our family station wagon. This scenario was repeated later several more times with the B-8M and B-11 Gyrocopters, and in other cities.

In one case, I had to taxi the Gyro nine miles, a distance from the airport to downtown — not because I couldn’t land any closer, but because that city’s fixed-wing airport was being dedicated, and we were a part of the celebration.

A postscript to this glimpse into history was that the news media “did their thing” and reported faithfully to the world what they had seen. Only one of them mentioned my taking off from Raleigh Airport “when all fixed-wing aircraft were grounded.” He thought that was significant enough to report.

Wouldn’t you know it, some CAA bureaucrat in Washington saw that report and fired off a stiff letter to me, threatening prosecution. “Your Gyrocopter,” he said in an inimitable governmentese language, “was not equipped for instrument flight, was operated below IFR weather minimums, and therefore you were in violations of CARs.” He threatened revocation of my pilot’s license and other stiff penalties if I didn’t give him a satisfactory explanation for this alleged “violation.”

It took some powerful high-level intercession from government hierarchy to get him off my back. An over-zealous bureaucrat can spoil a lot of brew. Is there any wonder that Gyro pilots avoid flying from controlled airports?

I learned my lesson a long time ago, and am perfectly willing to leave airports to fixed-wing aircraft. They must have them to stay afloat. Gyros don’t. 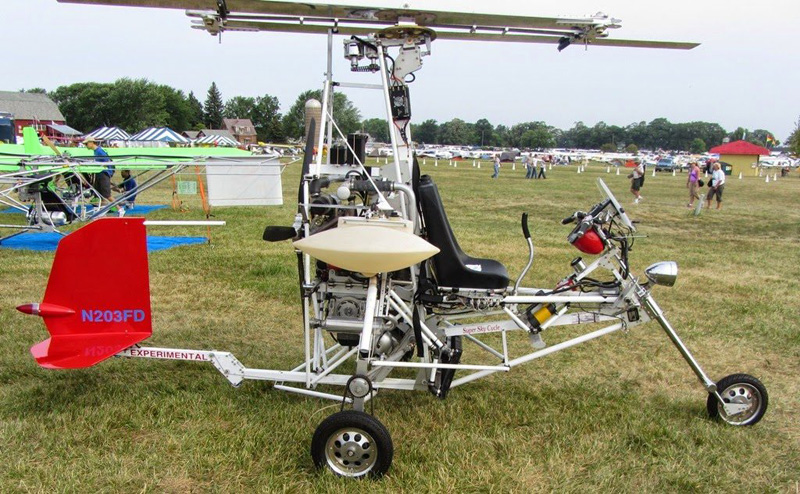 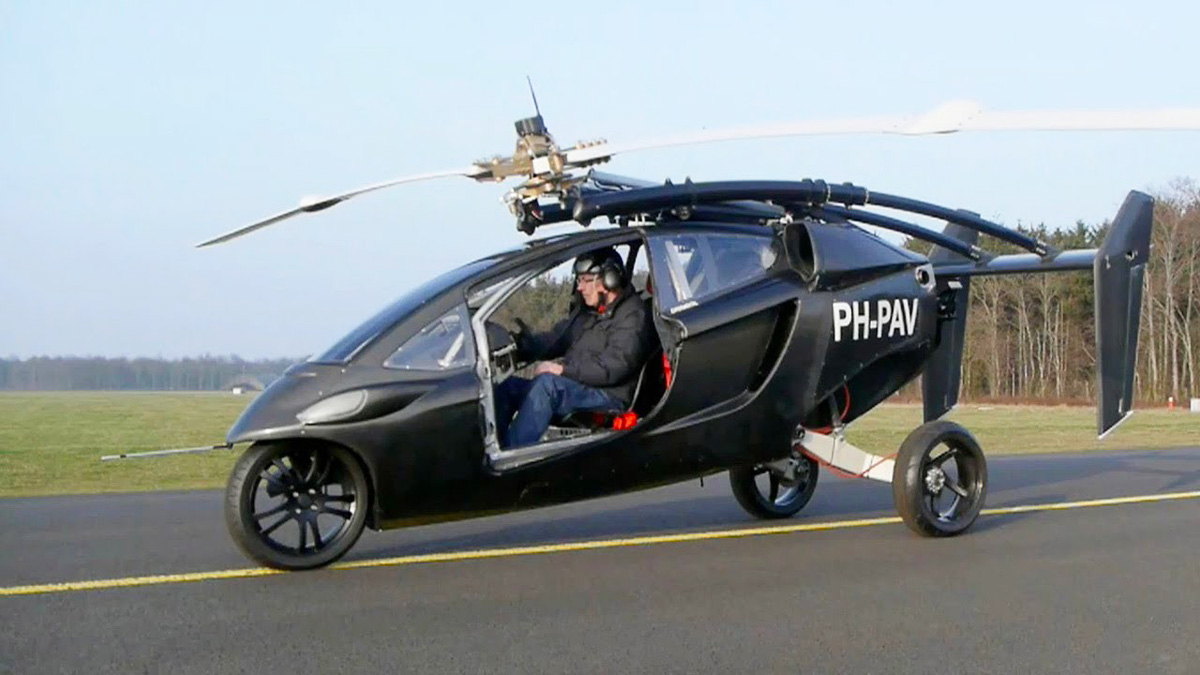 Be the first to comment on "Roadable Gyrocopter History"