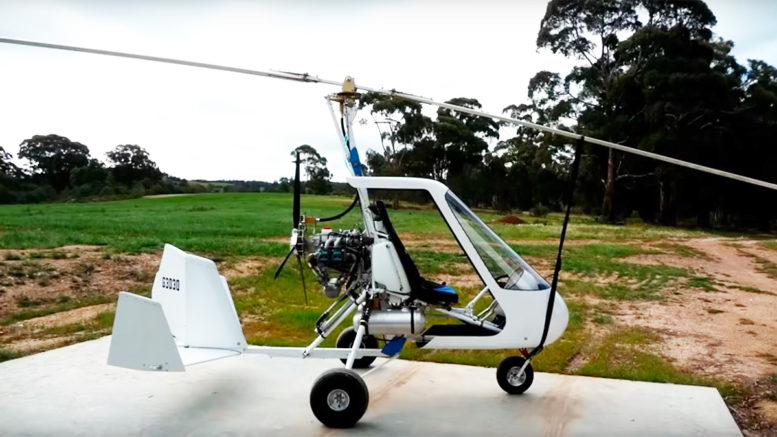 Some young people know what they will do with their lives from an early age, and others flounder. Jim Vanek, president of Sport Copter, Inc., of Scappoose, Oregon, fits into the first category; he wants to design and manufacture the best gyroplanes made.

And he has a distinct advantage as he sets out to achieve his goal: the legacy of his father, Chuck Vanek, who designed and built his first sport gyro in 1957 and over the next three decades built and sold Vancraft kits under that company name.

So far, about 300 Vanek gyros have flown. Jim also gets a lot of support at home. His wife, Kelly, flies gyros solo, although she admits that motherhood has interfered recently with her flying activities. 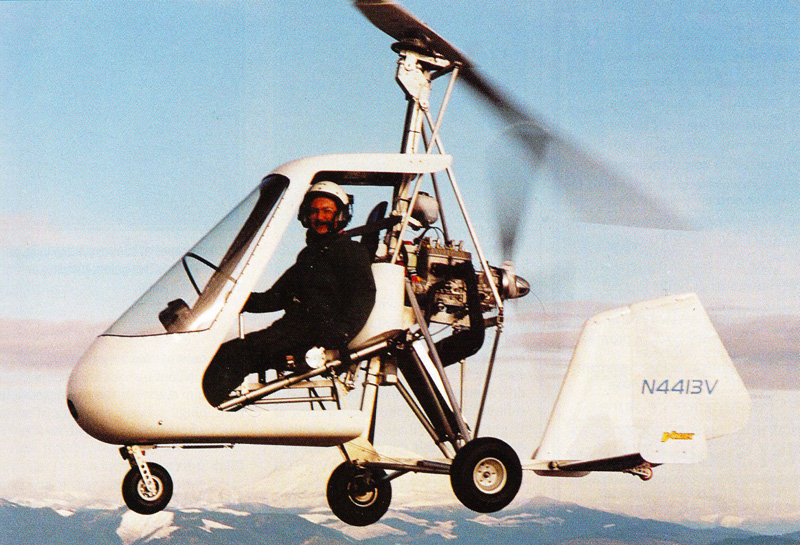 Family legacy: Jim Vanek shows off his company’s Sport Copter Vortex gyroplane, the result of decades of development by him and his father, Chuck Vanek.

At age 10, young Jim began flying with his father in Vancraft two-seaters, which developed a reputation for being sturdy and reliable. Chuck Vanek retired in 1988 but continues as a consultant, and Jim, all grown up, continues the business, having changed its name to Sport Copters, Inc., in 1991.

Recently he occupied 12,000 square feet in a new hangar facility at Scappoose Airpark, where I visited last fall. A continuous driving rain would prevent any Sport Copter flight demonstrations that day, I thought. But I was wrong. Details later.

Sport Copter has designed and is preparing to complete and test three new sport gyros, all of them based on successful Vancraft machines. More than 100 improvements are incorporated in the new models, Jim Vanek said.

The bottom of the line is the Lightning, a legal ultralight powered by a two-stroke Rotax 503. Next is the Vortex, a homebuilt, licensed gyro powered by the liquid-cooled Rotax 582 or other engines.

Finally, there’s the Sport Copter II which is intended for training and law enforcement as well as sport flying.

All will be available in kit form, with or without the engine included, and complete or in small packages for those who want to spread out the cost of purchase. All three models incorporate significant innovations.

Probably the Sport Copters’ most notable difference from most gyroplanes is the control system, which desensitizes pitch and roll control by providing more pushrod movement than is physically possible with the limited angular limits of standard and special aircraft rod ends.

A patent is pending, and he hopes that others in the small-rotorcraft industry decide to use Roto-Control because it addresses a major safety issue in small gyros and helicopters: over-control leading to pilot-induced oscillation (PIO), which is sometimes fatal.

Close to the ground, PIO has caused pilots to crash as they got ahead of or behind the gyro’s pitch response to ham-handed stick inputs.

At altitude, PIO has caused structural breakup that followed rapid forward stick movement that reversed the normally upward airflow through the disc. 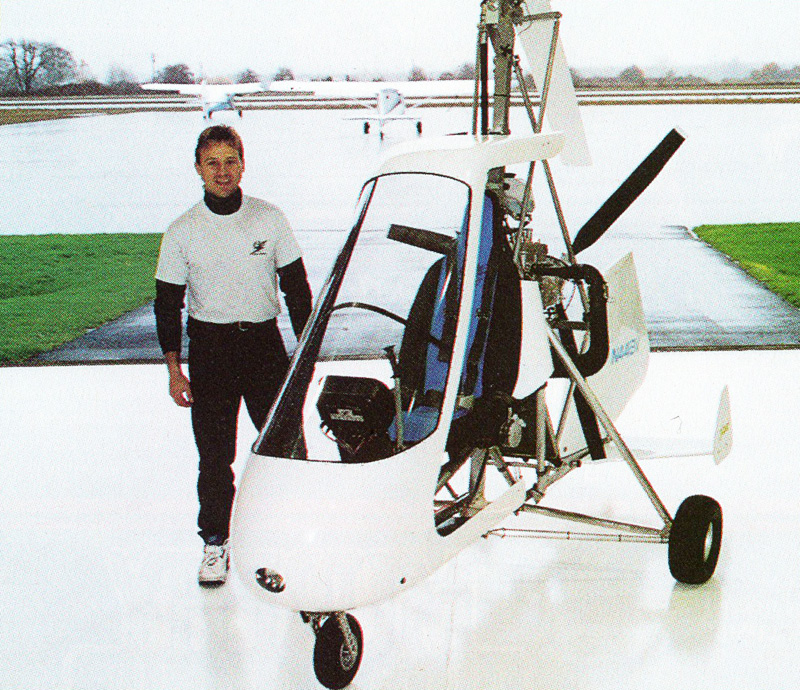 Company President Jim Vanek prepares to fly in an Oregon rainstorm. He’s done it before.

Both of these PTO-related problems should be minimized or eliminated by a system that requires large stick movement for a small control change, and that is what Roto-Control does.

To be fair and accurate, I must note that with proper training and attitude, neither of these PIO possibilities is a problem. As in all of flying, training—coupled with applying what you have learned—is the key to success. For me and thousands of others, gyro flying has been nothing short of a delight.

Despite their simplicity and ability to operate safely (under proper guidance) in high winds, plenty of gyros have been rolled into a ball by their pilots while taxiing or attempting to take off.

(Landing accidents are rare because they touch down close to walking speed even in no wind; taxiing can present more of a challenge than landing.)

Many gyros link rudder pedals to the nosewheel. If the pilot touches down or tries to take off with the nose wheel off center (as might happen in a crosswind), a groundloop or rollover may occur.

Sport Copters’ solution is to use a free-castering nosewheel and to steer on the ground with differential hydraulic toe brakes as in Grumman-American airplanes and numerous high-performance homebuilts.

Vanek says that with their low e.g., the Sport Copters resist rollover even in rough terrain. But anything is possible, and the rotor mast—made of two beefy 1×2-inch aluminum extrusions—is designed to remain intact through a rollover even with the blade turning at flight speed.

Chuck Vanek’s gyros demonstrated this feature, Jim said, and he intends destructive testing to make sure that his new models stand up as well.

Sport Copter – Made To Be Tough!

Related to ground handling is how well an aircraft absorbs the bumps in rough-field operations, and Vanek claims his machines excel here. The new line incorporates special polyurethane shock absorbers in both the main landing gear suspension and in nose wheel shimmy damping.

Telescoping thick-wall tubes containing the shock absorbers extend from near the rotorhead to the main wheels, and they provide up to 8 inches of shock-absorbing travel.

Doughnuts made of the same material are built into the nose wheel assembly and act as a shimmy damper. Vanek has tested the system to 80 mph, he said, and it keeps the nose wheel steady.

Also aimed at durability and maintaining integrity in rough conditions is the system of attaching the parts. Plastic or Teflon chafing pads are used between aluminum and other flat metal, and solid PVC plugs prevent crushing of metal tubes where they are bolted.

Vanek points to his seat as an example of his concern for pilot safety, particularly in a crunch. He believes that the seat/tank often seen on gyros introduces an unnecessary risk in a crash, where a resulting fuel leak could be serious; on Sport Copters, a separate fuel tank with a shutoff valve reachable from the seat is used instead. 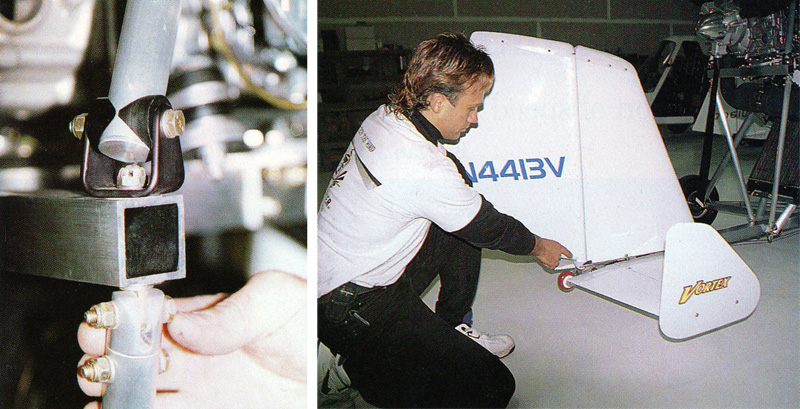 The seat itself, which Vanek calls a Cyber Seat, is made of composites and contains TemperFoam, which conforms quickly to the pilot’s body shape and is therefore extremely comfortable. More important, it provides crushable impact protection up to 14 G, according to its manufacturer, a neighbor at Scappoose Airpark.

Airframe and landing gear configuration also contribute to maximize safety in a Sport Copter, Vanek said, as landing attitude is exceptionally forgiving. The machine remains docile and controllable even when landed on the nose-wheel first, he said. Don’t try this at your home airport in an airplane.

The rotorhead is unusual in several respects. It is more massive than those found on many gyros. And it contains replaceable polymer bumper stops and shock isolation based on compression of special polymer and Teflon bushings mounted in stainless steel retainers. These features reduce shock and vibration transfer between the rotor and the rest of the aircraft.

McCutchen Sky Wheels composite rotorblades are sized at 23 feet for the ultralight Lightning, 25 feet for the Vortex. and 30-foot diameter in the Sport Copter II. In addition, Vanek is in the process of producing his own rotors, which are made with an aluminum extrusion leading edge and bonded aluminum skins.

Assembly of these gyros is essentially a bolt-together process not requiring fabrication or drilling of parts.

Not yet ready during my visit were the step-by-step building instructions with photos and a video that includes operations, tune-up and service instructions. The manual and video are to be included with each kit.

Plenty of options are available for these gyros, but each kit contains nearly everything needed to get in the air.except flight instruments, fuel, a helmet and maybe a bit of paint. In the Lightning ultralight, a viable option would be to limit flight instruments to a $25 Hall airspeed indicator.

The other end of the scale is a fancy electronic panel that includes vertical speed, airspeed, altimeter, outside air temperature, engine hours, coolant temperature, rotor speed, EGT, engine rpm and CHT. The price: $960 on the Lightning and Vortex; it’s standard on the Sport Copter II.

Sport Copter – On The Horizon

In addition to completing, testing and kitting three gyroplanes, Jim Vanek is working on another project: setting up the North American distributorship for a series of four-stroke aircraft engines made in the Czech Republic.

The Verner SVS 133 and SVS 137 are described as direct-drive, 62-65-hp, long-stroke engines that have been powering trike ultralights in Europe. Vanek plans include distributing single- and dualmag versions with stainless steel exhaust systems.

The first sample was expected in Scappoose as this is being written in March. Jim Vanek plans to fly the engine on a Vortex gyroplane.

Not-so-gentle rain continued all morning in Scappoose as I gathered this information and clicked some pictures. By lunchtime, the storm had become a gully-washer, and conditions continued as we returned to the big hangar.

“Don’t fly the Vortex on my account,” I told Jim Vanek. I wasn’t looking forward to being responsible for rotor or propeller leading-edge rain erosion—or for soaking him to the skin; the “cabin” on the prototype Vortex is accurately described as a semi-enclosure.

Despite my protests, Vanek donned his flight jacket and gloves, fueled the gyro, opened the hangar door, started the Rotax 582, and taxied into the sodden gale. I hopped into the right seat of somebody’s pickup truck for a ride of a few hundred feet to the Scappoose runway.

Vanek set brakes, engaged the prerotator, released brakes and rolled maybe 100 feet before climbing steeply into a 15-mph headwind. We watched as he flew the pattern and made a no-hands low pass. Hmmm. That thing is stable. 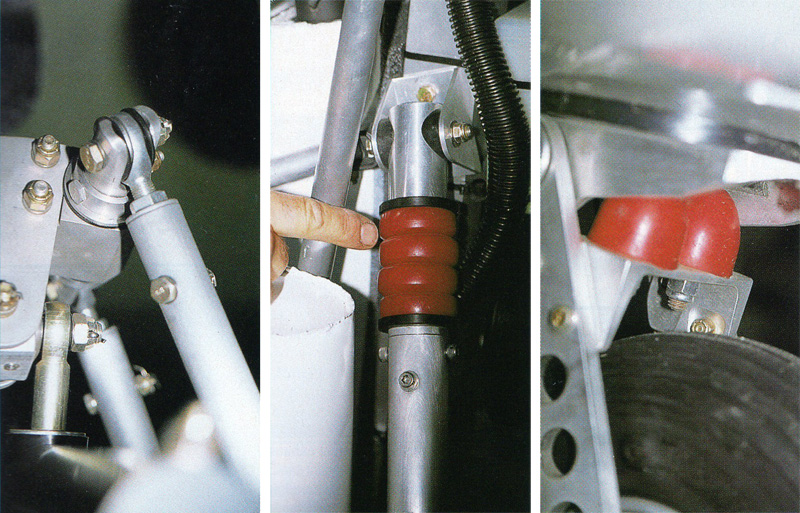 LEFT: Key to the special control system in Sport Copter gyros is this patent-pending part of the control linkage.
MIDDLE: Special polyurethane shock absorbers are incorporated into maingear suspension.
RIGHT: The same polyurethane material is used in the nosegear as a highly effective shimmy damper.

Finally he climbed to about 1000 feet nearly overhead. I knew what was coming. Yep, deadstick. No more engine noise. In still air, the Sport Copters will no doubt meet the 4:1 deadstick glide ratio claimed for them. But facing the breeze, the gyro’s glide was much steeper. Vanek, of course, accounted for that.

With stopped prop, he touched down smoothly on the center-field grass 25 feet in front of the truck. An instant Rotax restart, and he was airborne again from the somewhat rough turf.

The next landing was a final, and I checked to see if Vanek was soaked; after all, he had included both-ways rudder skids in his fly-by demo, and the enclosure sides are open. I need not have worried. He was dry and assured me that he was comfortable. And the rotor and prop retained their leading-edge paint.

Assuming the Sport Copter Vortex is representative of all the company’s gyros, these machines will be real confidence-builders for their properly trained pilots. Sport Copter insists on professional training before anyone flies its products.

The company refers customers to local gyro training schools or invites them to its school in Scappoose, which currently trains in a McCulloch J-2 gyroplane (a certified product of the early 1970s) for $130 per flight hour. Eventually, the school will offer instruction in its Sport Copter II.

Lacking rotorcraft ratings but having been signed off for gyroplane solo some time ago by gyro CFI Steve Graves, I may have to get current and sample a Sport Copter myself at some point. I’ll let you know. 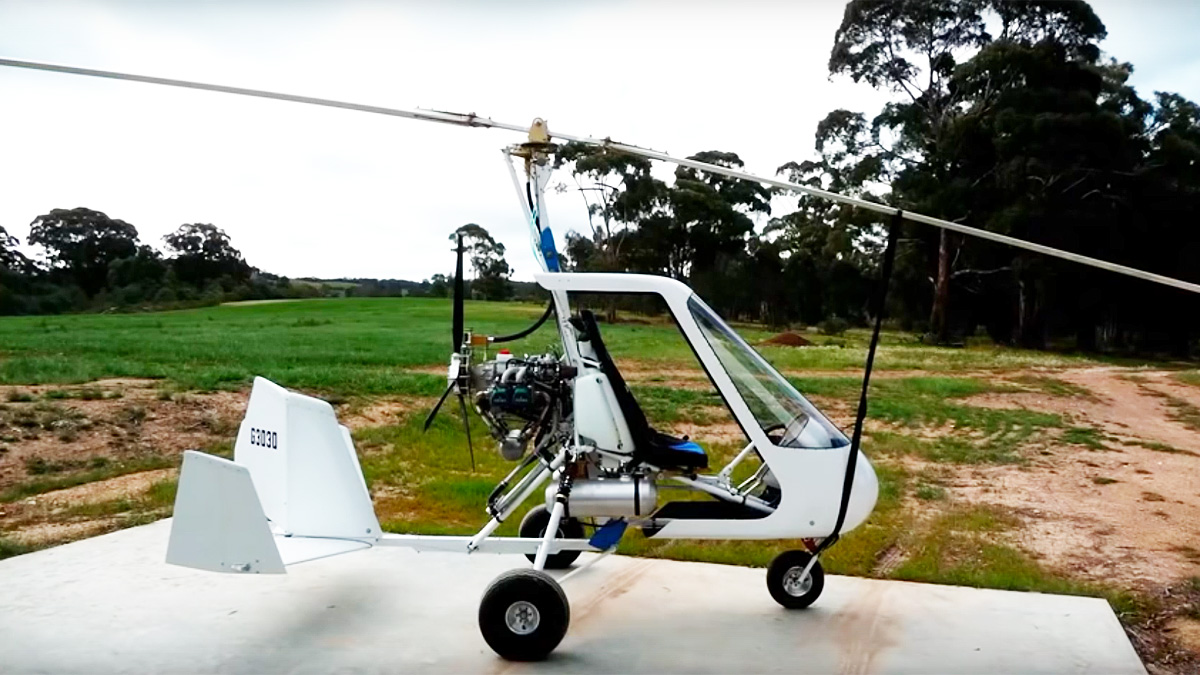