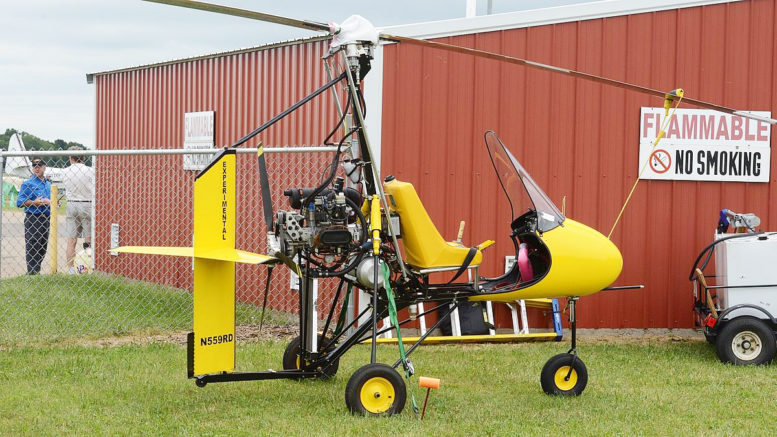 Ernie Boyette taxis his two-place Rotor Flight Dynamics Dominator after introducing one of many spectators to the wonders of continuous autorotation in a modern sport gyroplane.

On The Ground At The 1995 Indiana Convention

Whether it’s neophytes looking at their first gyroplane, those making a major decision on a kit or plans-built option, or experienced pilots “appropriating” good ideas for their own machines, there is no doubt that the rotorcraft themselves are the main attraction.

Although Bensen Aircraft has been out of business for years, there are still plenty of examples of this classic homebuilt. Paul Abbott’s immaculate machine, complete with the original overhead control stick, is a prime example of the breed.

More recent variants present included Ken Brock’s KB-2 and the Parsons single-place from Custom Gyro Works. Virtually all the various Air Command single-seat variants were on hand, along with the SnoBird gyro. Many of the single-seat machines were more difficult to classify because they incorporate features of several existing designs.

The simplicity of the basic gyro airframe makes it relatively easy to modify an existing aircraft, so many machines are in a continuous process of evolution as their owners strive for the mix of features and performance that suits their individual needs.

One trend that can’t be ignored is the influence of Ernie Boyette’s Rotor Flight Dynamics Dominator. It features a tall tail with an integral horizontal stabilizer, and the keel is moved up on extended gear legs to raise the pilot’s seat, improving the geometry of the engine thrustline.

Dominator-style tall tails are quite common on a wide range of machines, and there was one aircraft that looked like a Dominator/Air Command hybrid. It looked a bit bizarre but flew very nicely!

Chuck Beatty showed up with a new machine that featured the high stance of the Dominator but with quite a few unique features. The airframe was made mostly of large-diameter aluminum tubing with the small tail feathers at the end of a long, drooping tail boom. The design also featured a unique rotorhead with both lead/lag and coning hinges. The aircraft seemed to fly smoothly.

Blades and engines are the two most important elements defining the performance of any gyroplane. I’ll talk about engines shortly, but Ernie Boyette’s Rotor Flight Dynamics Dragon Wings rotor blades, which are standard on the Dominator, are appearing as after-market modifications on a wide range of aircraft.

A rarity just a few years ago, two-seat gyros are now common and are a major element in the sales picture for most manufacturers. Dan Haseloh and his Rotary Air Force contingent were on hand with what seemed to be a small fleet of RAF 2000 Subaru-powered enclosed two-seaters.

One was flown all the way from Saskatchewan. Air Command International had its tandem machine (100-hp Arrow engine) in constant operation, and Rotor Flight Dynamics put on impressive demonstrations of Boyette’s new two-seat Dominator.

Several versions of the Custom Gyro Works Parsons tandem trainer were in constant service. Steve Graves, who uses his Lycoming-powered Marchetti Avenger for flight training, seemed to spend most of his time in the air.

The Farrington Aircraft crowd brought along two quite different two seat aircraft. One was the certificated Air & Space 18A that first saw service in 1946. Farrington has been refurbishing and restoring 18As for several years and has recently initiated production of brand-new versions of this tandem two-seater (a three seat version is under development).

The Air & Space 18A is the only certified gyroplane in production, and it’s the only one capable of jump takeoff. After ground run up, the pilot pushes the Fly button…and does.

This fully enclosed machine is massive by sport gyro standards and is the only gyroplane currently available that will execute a jump takeoff. Woody DeSaar gave me my first opportunity to fly in the 18A, doing some air-to-ground photo passes, and it is certainly an impressive and smooth-flying aircraft.

The second gyro in the Farrington stable is the new Twinstar two-seater, powered by a 150-hp Lycoming. Available in configurations from open-frame to fully enclosed, this new bird attracted a lot of attention. The Farrington crew flew both the 18A and Twinstar in from their Paducah, Kentucky, headquarters, so the cross-country capabilities of both machines were well-demonstrated.

The only other certificated sport gyroplane flying in this country is the McCulloch J2. This enclosed, side-by-side two seater is just plain cute, and two examples of this comparatively rare aircraft were flying during the convention.

Two-seat gyroplanes offer the sufficiently motivated the opportunity to get their first ride in a gyro—an experience that is often closely linked to jumping into the sport with both feet! At most conventions and gyro fly-ins, getting a ride is a hit-or-miss proposition that requires spending many hours in line.

This year, a block of time was set aside each day for such rides. Gyro manufacturers and CFIs donated their time, aircraft and gas to provide the experience for all comers.

Participants included Air Command, Farrington Aircraft, RAF, Rotor Flight Dynamics, SnoBird Aircraft Partners, and gyro CFI Steve Graves. The effort involved in this operation was impressive, and the net result was that anyone who wanted to experience flight in a gyroplane had the opportunity.

In most areas, we can assume that today’s aircraft technology is well ahead of the past, but this isn’t always true with respect to gyroplanes.

The classic Cierva/Pitcairn/Kelett autogyros of the 1930s had one trick generally absent in today’s machines: the ability to execute a jump takeoff. The blades were locked at zero pitch to minimize drag, and a powerful linkage to the engine was clutched to bring the rotor up to 150-200% of normal flight rpm.

In one operation the rotor drive was disengaged and the blades snapped and locked at normal flight pitch. The stored energy in the rotor lifted the gyro vertically while thrust from the propeller transitioned the gyro to horizontal flight.

If the maneuver is properly executed, the autogyro simply lifts straight up and flies away. There are well over 30 different basic gyroplane types flying today, not to mention countless variants. Of all of these, only the Air & Space 18A can execute a jump takeoff.

Most of the others are equipped with engine-driven or electric prerotators to get the blades started, but spin up is done with the blades at normal flight pitch, and most prerotator systems will only get the blades to 50-75% of flight rpm. The rest of the rotational speed is acquired in a short taxi-run prior to liftoff.

A powerful machine with a good prerotator can get off the ground in 50-100 feet, especially with an assist from a headwind, but this is a far cry from the vertical liftoff of the 18A and its venerable predecessors.

At the 1993 PRA convention in Brookville, Ohio, the board of directors announced the PRA Autogyro Performance Award: a contest to spur efforts to achieve jump-takeoff capability in current sport gyroplanes.

A total of $9000 in prize money, donated from various sources, would be awarded at the Green-castle convention to the gyro that would execute a deceptively simple task: lift off and clear a 10-foot obstacle within 50 feet, fly a prescribed cross-country goal and return, land and perform a normal takeoff.

In the event that no aircraft achieved the primary task, a consolation prize of $1000 would be awarded to the pilot with a combination of the shortest distance to liftoff and the best time for the cross-country circuit. The competition was staged at 8 a.m. on Sunday to minimize the influence of the wind.

Three pilots, Johnny Hay, Hank Hinchman, and Carl Schneider gave it their best. None succeeded in clearing the 10-foot threshold, but Hank Hinchman and his H-1 Racer won the consolation prize with a very short take-off and a respectable time on the cross-country leg.

Hank’s machine was equipped with a nitrous oxide tank for a short boost in power, and he had a linkage to de-pitch the blades and achieve a higher blade speed during prerotation. With no winner in ’94, the award ratchets up to $14,000 this year: a serious incentive to recapture a lost piece of the gyro performance envelope.

Just to prove that the goal was attainable, Don Farrington took out the Air & Space 18A, lifted off to about 25 feet, transitioned to forward flight, and climbed out with no loss of the initial altitude gain!

Subaru engines, both direct drive and geared/belted down, continue to make inroads into the light gyro market at the expense of the classic Mac drone engines and the Rotax line.

The direct-drive Subaru engines (usually an EA-81) are highly refined and make a very clean installation. They do quite well on most single-seat machines although you do have to make sure you prop them correctly if you want reasonable performance.

Equipped with reduction drives, Subaru engines are showing up on a wide range of two-place machines (they are standard on the popular RAF 2000), although the larger two-stroke Arrow engines are also getting plenty of use.

(The 100-hp Arrow is standard on the Air Command tandem.) At the light end of the single-seat spectrum, the Rotax 503 continues to be quite popular. One of the newest entries into the engine market is Air Power Systems Plus, Inc., with its AP-52 aircraft engine.

Jesse Anglin’s company had one of these engines mounted on a test stand and Anglin (a well-known designer whose credits include the Spacewalker [now named Warner Revolution]) put on some impressive run-ups. The engine is a two-cylinder, direct-drive four-stroke that weighs about 108 pounds including electric start and is rated at 52 hp. 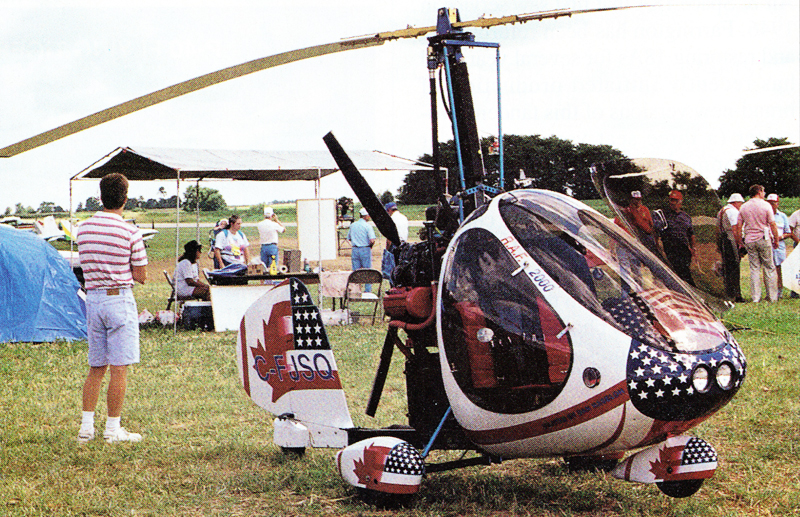 One of Rotary Air Force’s RAF 2000 gyros powered by a Subaru EA-82 flew to Indiana from home base in Saskatchewan…and went right to work giving rides to spectators.

The engine was smooth and impressive with a no-nonsense aircraft heritage. A single-magneto ignition is standard, but you can have a dual installation for an extra $500 on the $4400 base price for this gem.

The engine is extremely clean and should fit in most cowls with no trouble. Anglin reported that one engine had run for about 500 hours and there was too little wear for precise projections of the TBO.

Anglin said he is comfortable with an estimate of 1500 hours. The engine hand-props easily and, by leaving the starter and flywheel off (the engine remains smooth-running), you can come in just above 90 pounds.

The unit will swing a 60×32 prop, so using those horses should be pretty easy. A four-cylinder model (100+ hp) is under development. I don’t like to get out on a limb when it comes to engines, but this one looks like a winner!

No convention would be complete without a range of forums, and there was a lot to choose from. Safety, two-stroke engines, a Subaru-fest, and an informative FAA event were among the highlights.

Throw in a gyro auction, the annual membership meeting, and hangar flying sessions that ran into the wee hours of the morning, and you have all the ingredients of a successful fly-in.

All-in-all, the Hoosier Rotor 500 did an excellent job of showcasing the wide-ranging options in sport rotorcraft. 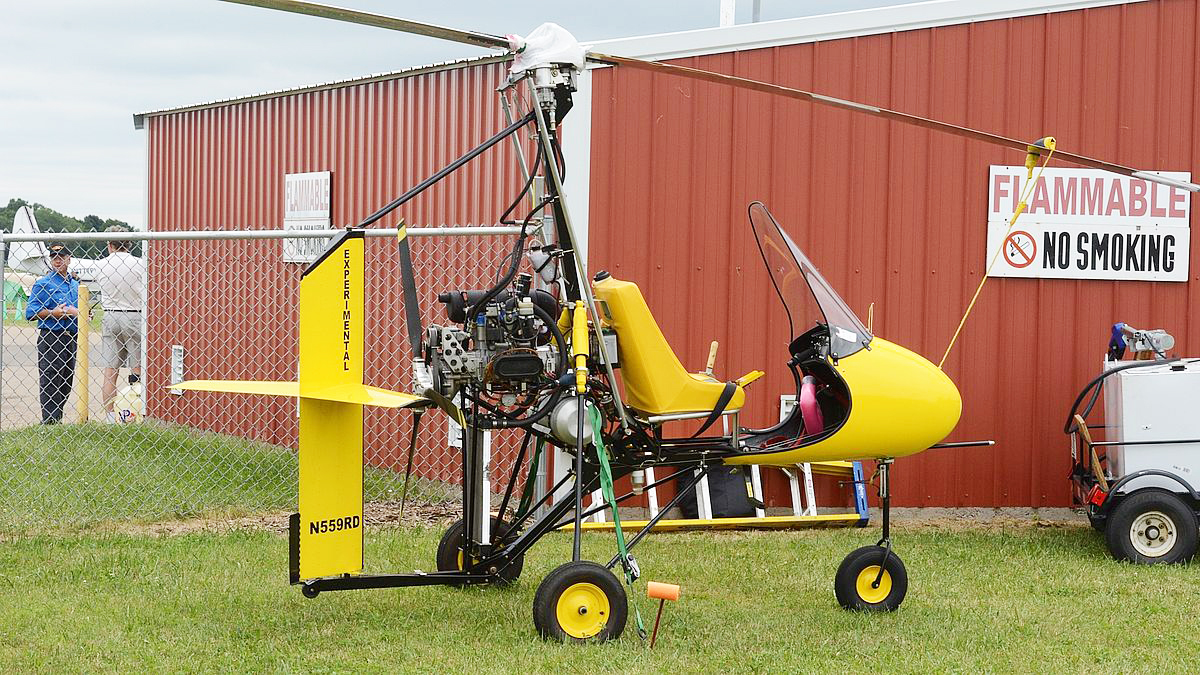 Article Name
Gyrocopters - The Early Days
Description
Today we see many sleek, composite gyrocopters, but who were the innovators, the ones that opened the doors to the modern gyrocopter?
Author
Ralph Taggart
SHARE TWEET PIN SHARE

Be the first to comment on "Gyrocopters – The Early Days"