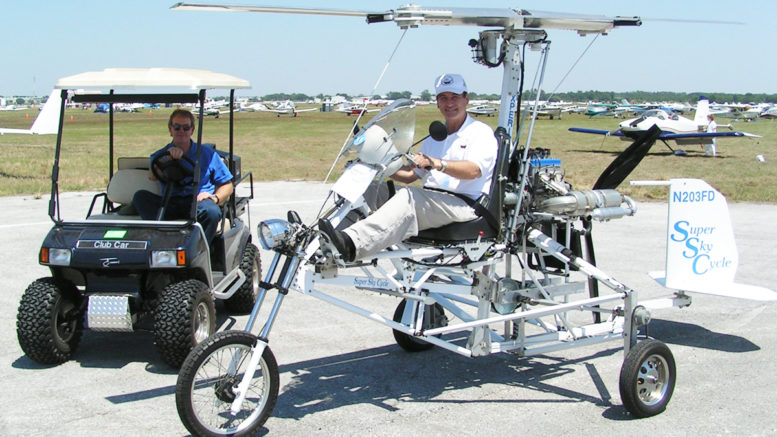 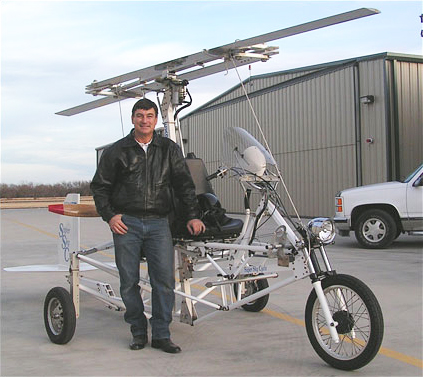 “Every flying vehicle we design and build will be based on this patent,” Neal said “It means we’re free to develop practical flying vehicles without infringing on patent rights of other inventors.” A two-place flying car version is also being developed.

He said the patent covers a “fly-drive vehicle” with a folding rotor shaft and a transmission to power either the drive propeller or wheels.

“The problem with flying cars in the past was what to do with the wings once you were on the ground,” said Neal. “With a “fly-drive” gyroplane, just fold the rotor blades and drive on down the road.”

“Using rotor blades for the wings of a flying car makes the fly-drive Super Sky Cycle a new kind of vehicle.” Neal said. “There’s nothing else like it, a gyroplane that can fly at freeway speeds, land in 20 feet, be driven home as a motorcycle, and fit in you garage.”

The Super Sky Cycle is based on a Monarch single-place gyroplane kit, Neal said. First flown in the Super Sky Cycle configuration on Dec. 23 2006, the new fly-drive flying motorcycle vehicle can fly at 20 mph, cruise at 50 mph at half throttle, and tops out at 65 mph. He said a Rotax 582 engine is used with a three-blade 60-inch propeller.

Neal said that he plans to demonstrate the Super Sky Cycle flying motorcycle in both flying and driving modes at the Experimental Aircraft Association’s “Sun’n Fun” fly-in at Lakeland, Fla , April 4-10.

“There’s nothing like it!” said Larry Neal, president of The Butterfly LLC, after test-flying his newly patented “fly-drive vehicle” the Super Sky Cycle, seen here with its rotor blades folded. It flies as a gyroplane and drives as a motorcycle.

BIOSKETCH OF THE FLYING MOTORCYCLE INVENTOR

Larry Neal (designer of the Super Sky Cycle) was born in Crossville, Tennessee in 1951. At an early age he was intrigued with flying machines and vowed to be a pilot when he grew up. While working his way through college as a mechanical engineering student he was selling books door to door for the third summer and was sent to Fort Worth, Texas in 1973. It was there that he bought his first flying machine and learned how to fly it. That fall a Bensen B8M gyrocopter was flying all over Cumberland County, Tennessee.

While living on the Cumberland Plateau in beautiful eastern Tennessee he built his first two place gyroplane and installed a Porsche engine on it curing the summer of 1978. In 1983 Larry had moved to Texas where he attained his private pilot’s certificate with Single Engine/ Multi Engine Land ratings. He later added the Rotorcraft/Gyroplane rating. He also flew his own Seneca II airplane along with numerous types of ultralight airplanes and gyroplanes.

In 1984 Larry started thinking of build a flying car and ten years later started manufacturing parts that would be critical to the project. A propeller speed reduction unit (PSRU) was put into production. A gyroplane based flying car was naturally his choice for the flying part as it is very safe and will not stall if you get too slow.

A gyroplane will float down slower than a parachute with the engine turned off and land in a very small spot with the pilot in complete control. A parachute system was also designed for the flying car that will let the whole aircraft and passengers down in an emergency situation.

The latest addition to the safety features is the new G-Force Landing Gear that has a parallelogram strut system and long stroke that has been tested to absorb over 700′ of vertical descent all the way to the ground without damage to the vehicle or injury to the pilot. Larry has also been the chief test pilot for CarterCopters since September of 2001. History was made on June 17th 2005 when the team breached the Mu 1 barrier.

His love for flying and his vision of building the Flying Cars of the future is only overshadowed by his love for God and for his fellow man.

“There’s nothing like it!” said Larry Neal, president of The Butterfly LLC, test-flying his newly patented “fly-drive vehicle” the Super Sky Cycle. It flies as a gyroplane and drives as a motorcycle. 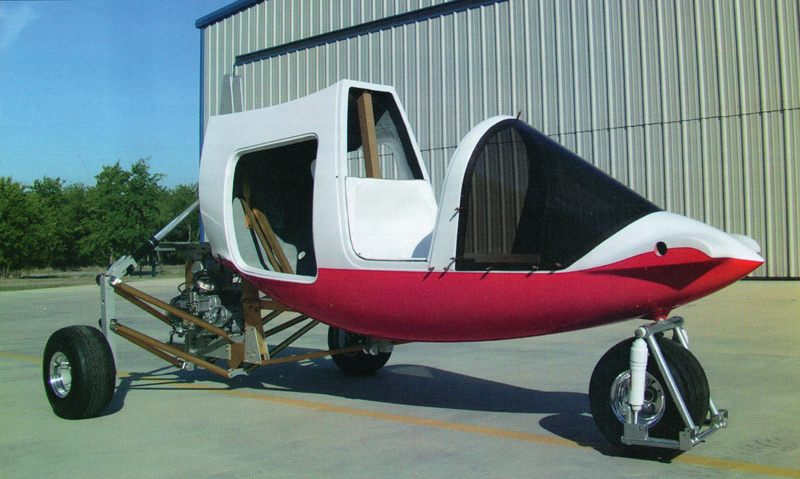 New Horizons Components (www.thebutterflyllc.com) has been working on an upgrade kit that will allow it’s revolutionary Monarch and Golden Butterfly gyroplanes to be ‘roadable, which means a gyroplane that can function as a legal motorcycle.

We have a photo of the newest prototype of the Super Sky Cycle which will be the roadable kit for the Golden Butterfly. The current prototype is using a Honda engine which should provide 40mpg on the road and will be able to fly or drive up to 2 people.