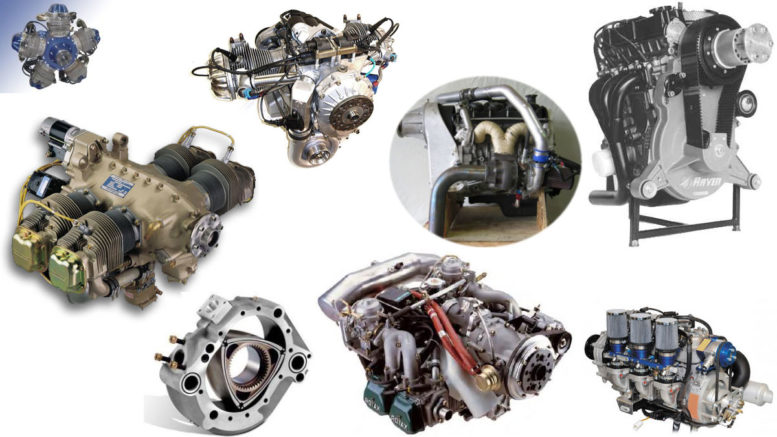 How can we evaluate engines which seem so different from one another, like a Wankel and a 4-stroke radial, or a V-8 auto conversion and a 2-stroke twin?

When we look at numbers, some of which are given by the engine makers or sellers, we have to assume that they’re accurate, until proven otherwise. Other numbers we can calculate from that information, and some we can measure ourselves.

In this installment, we will try to provide you with the necessary tools — some simple formulas and the range of values of current technology engines — so that you can tell whether or not the “Whiz-Bang 450” is too good to be true. 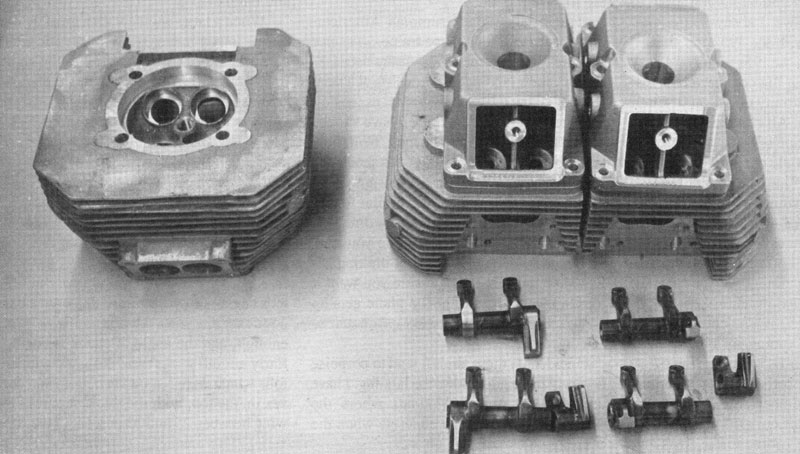 This is a four-valve head. Automotive designers are installing multiple valves in many of their high-performance engines in order to improve breathing and combustion chamber efficiency.

The most commonly given data on engines is maximum horsepower at its rated revolutions per minute. The total displacement is usually also given. You can derive a great deal of information from just those three numbers.

To simplify things, we are going to just use the engine’s maximum horsepower ratings. Max torque ratings and rpms are not always given and, in most engines, the max torque is not only somewhat higher than the torque at max horsepower, it also occurs at a lower rpm.

The max torque rpm is where the engine breathes the best. At higher rpm, the torque starts felling off because of increased restriction to the increasing flow through the engine, and the increase in mechanical friction at the higher speeds.

In the rpm range between max torque and max horsepower, the increase in rpm more than compensates for the decrease in torque. Past max horsepower rpm, the torque is dropping faster than the rpms are increasing, and it is time to shift gears, if they are spaced close enough.

In aircraft, we do not normally shift gears, although it has been tried. It does point out that with many of the engines now being considered for aircraft use, a reduction unit is part of the package.

There are speeds at which current technology engines operate efficiently and for sport-aviation-size engines, that results in much too high a crankshaft speed for an efficient propeller. The direct-drive engine has some definite advantages in simplicity and cost and, in some cases, would be the best choice.

Especially when adapting an engine originally designed for another use, the ability to optimize both the engine speeds and prop speeds by the use of gearing should make for a superior engine. We will get back to speeds later.

What are the really important parameters for our aircraft engines?

Reliability can only truly be determined empirically. The others are self explanatory. 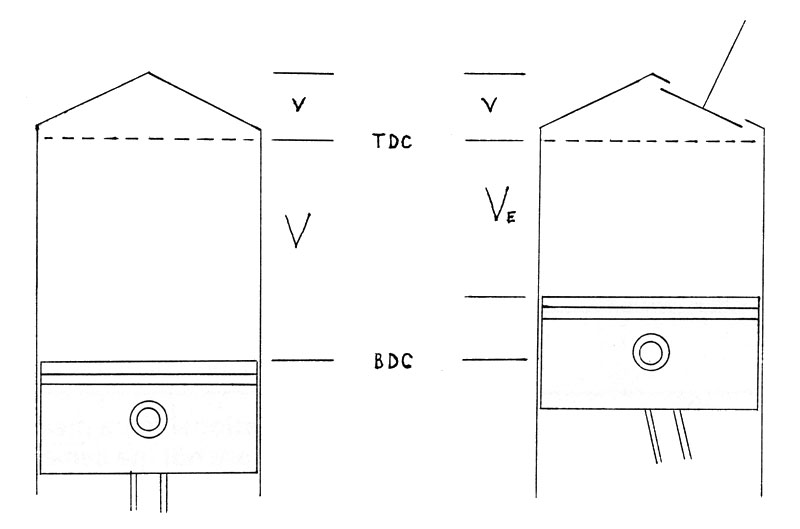 Sport aircraft are normally flown a relatively low number of hours a year and seldom on very long flights. The smaller size and lower weight, plus the lower first cost and lower maintenance costs of 2-strokes, more than make up for their somewhat higher fuel burn.

Reliability is still the question. We can certainly become accustomed to, or overlook the sound of these 2-strokes, especially if it means the difference in flying or not flying. My point is that you should keep an open mind to things which work.

Bmep (brake mean effective pressure) is a term used in the classic horsepower formula, and is the mean pressure which would be acting on top of the piston, for the full length of the power stroke, to give the measured power output. It is a very useful number, even if it does not really exist.

It does not take into account the fact that the exhaust valve opens well before the piston completes the so-called power stroke, and it includes frictional losses. It is nevertheless a very useful number in comparing how well engine designers are doing their jobs.

Since we are talking about internal combustion spark ignition engines with air as a working fluid and gasoline as fuel, we can say that the higher the bmep, the better use the designer is making of his machinery.

Here is a simple way to calculate bmep if you know horsepower, rated rpm and displacement: Simply put, torque is bmep times the piston area times the stroke length or bmep times displacement. We need to know the torque at the rated rpm, so we take the formula above and rearrange it.

It is not too unusual for a well designed and tuned 2-valve 4-stroke engine to produce one pound-foot of torque per cubic inch of displacement. What I did was to solve the classic horsepower formula for the case of an engine producing one horsepower per cubic inch at 5252 rpm.

Well, how do we use this number?

Take the torque number from the above formula and divide by the displacement. You now have the pound-feet of torque per cubic inch, which you multiply by 151 pounds per cubic inch to give you the bmep. Simple!

What kind of bmep can you expect from an engine?

Get your calculator out; I get 164 psi. Because we forgot to include the data table from “Battle of the 90s” and the addresses when it was run, we’re now bringing you this. There is much useful information in it.

You can see how gearing can make a 40 cubic inch 2-stroke the equal of a direct-drive 4-stroke of 200 cubic inches, as far as the prop is concerned, and at about 1/2 the weight. The bmep of the 2-stroke is about the same as that of a 4-stroke, and pumps the piston every revolution — twice as many power strokes as a 4-stroke.

Work is force acting through a distance. Torque is a rotational force measured at a radius of one foot from the center of rotation. Work and torque are not the same. They are related by the factor of two Pi, the distance the torque force acts in one revolution. One horsepower equals 33,000 foot pounds of work per minute equals 33,000 divided by two Pi or 5252 pound feet of torque per minute.

What is even more remarkable is that it can achieve this bmep level when a good portion of the bottom of the cylinder is filled with holes for breathing and so many of them are opened at the same time!

The Norton engine’s published ratings seem to be conservative, as the bmep from test data is about 140 psi. It is normal to give the displacement of a Wankel as the swept volume with the same number of power strokes as a 4-stroke engine. The bmeps are similar.

The CAM Turbo 90’s bmep of 220 psi seems to bust our norms, but remember, the turbo is a supercharger. The more air you can cram into the cylinders, the higher the bmep and the power.

The sky’s the limit — that is, until something breaks or melts down. Detonation, remember? The CAM runs about 9 psi of boost. The racing Merlins run over 50 psi of boost and close to 500 psi bmep!

Before we get out from under all this pressure, and come up to speed I want to give one more example: There is a V-6 auto conversion which is rated at 260 hp at 4800 rpm out of 230 cubic inches.

Calculator ready? – What do you get?

Let’s say we cam, gear, and prop the same engine so that it turns 6000 rpm, and still gets 120 psi bmep. What is the horsepower now? I get 209 hp. To get 260 hp from this engine is going to take a drastic breathing improvement and, realistically, that means super or turbo-charging.

The supercharged street version of this engine puts out 315 lb-ft of torque at 2000 rpm, and 210 hp at 4000 rpm. Obviously tuned for low-end grunt, not what we need to turn a prop. High rpm torque is what we need.

What would the hp and bmep be?

I get 274 hp and 197 psi bmep. We could run it faster without super-charging, but I think it would still take breathing improvements to hold the bmep at the 120 psi level at the higher rpms, and what about reliability and engine life in this basically stock auto engine?

If we could hold 120 psi bmep at 7864 rpm, we would equal the 274 hp of the super-charged example just given. I think that this is too big an engine to turn that fast for long.

How fast can we turn our ponies before they fly off the merry-go-round? Well, it turns out that rpm is not the right measure to use. It is the accelerations of the internal reciprocating parts which generate the stresses. The stroke length and the rpms are both factors which enter into the stress equations.

Remember that rpms are relatively free, while displacement weighs and costs. The 2-stroke and the other 4-stroke are remarkably close at 2700 ft per minute. (It would be interesting to find out the tip speeds of the Norton.) One thing to remember is that stress levels go up as a square function of speed. Twice the piston speed gives four times the stress level.

Under 3000 ft per minute seems to be a good max figure for normal engines. Cruise numbers are lower, and stress levels art much lower — square function, remember? Typically, road race engines run at 4000 fpm and above. Drag race engines run over 5500 fpm but, of course, not for long. That is a mean piston speed of over 60 mph.

In the engine example given above, the stroke is 3.39 in.

I get 2712, 3390, and 4443 fpm. The last is well into racing territory, and not for stock parts. The mid figure might be okay for short periods of time. The first figure is right in line with what others are doing.

For historical perspective, the Merlin engine, which is named after a member of the hawk family and not King Arthur’s wizard, has a 6-inch stroke, is normally rated at 3000 rpm, and is turned to 3800 rpm and more for racing. I get 3000 fpm and 3800 fpm. An especially easy case to calculate.

If you have seen how massive the rod assemblies of those radials are, and that all the loads from 9 cylinders are fed into one rod bearing, those speeds and the reliability which they achieved were quite a feat. The 0-200 which share the 3.875 in stroke with C-90 in our chart are turned about 4000 rpm in Formula I racing for 2583 fpm mean piston speed.

I hope the numbers are starting to fall into place for you. You now have some of the tools for separating the facts from the wishful thinking. 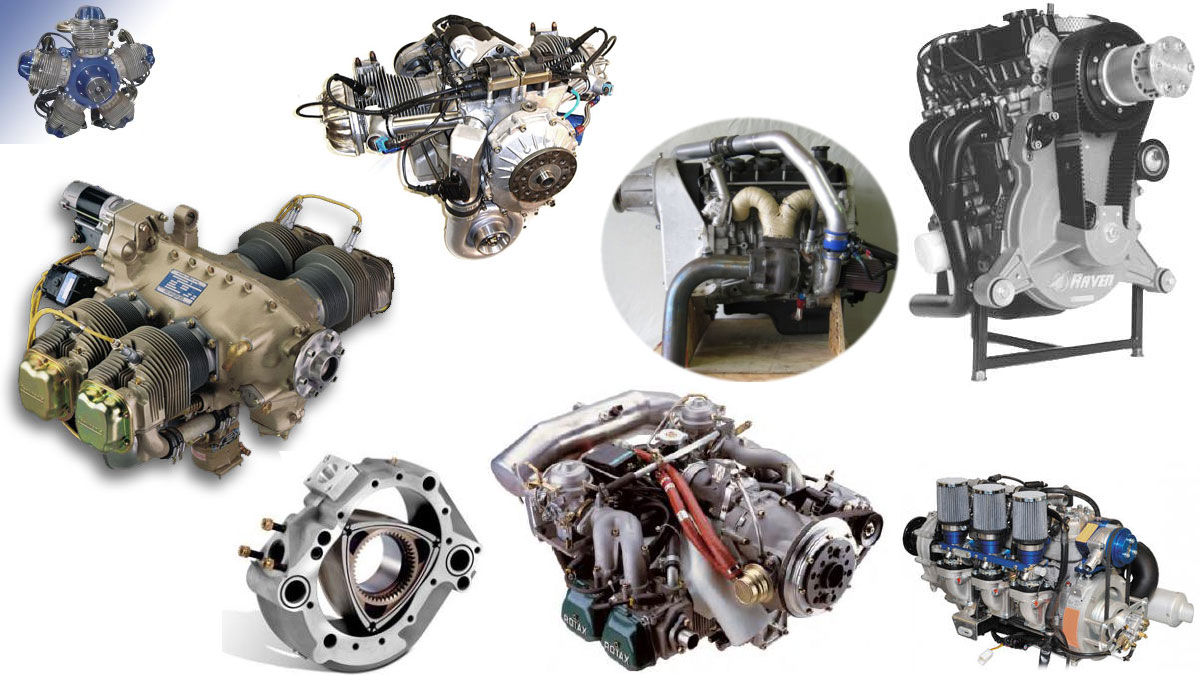 Article Name
Comparing Engines For Gyrocopters
Description
A comparison of 90HP engines for gyrocopters. Which one is right for you? Torque, BMEP and horsepower of four different 90HP engines are discussed
Author
Murray I. Rozansky
SHARE TWEET PIN SHARE

2 Comments on "Comparing Engines For Gyrocopters"