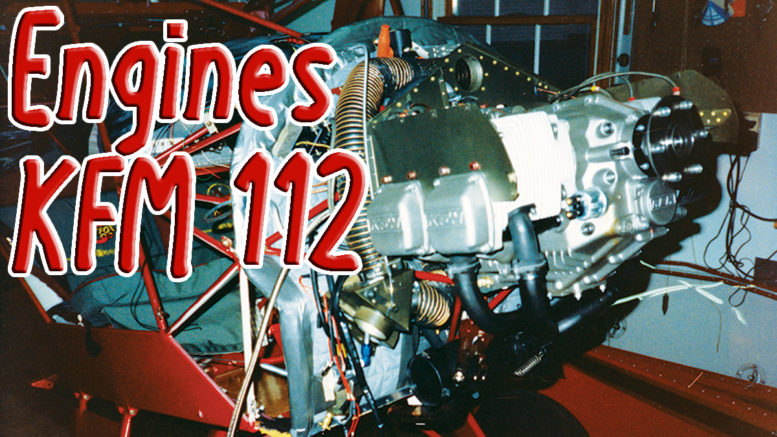 Is This The Engine We’ve Been Waiting For?

It may very well be the light aircraft manufacturer’s dream come true. What more could one ask for, but a four cycle, horizontally opposed, air cooled, dual ignition engine that packs a power-to-weight ratio of a little less than 2 lbs. per horsepower including the alternator, carbu­retor and even the electric starter?

What more could one ask than a promise (based on extensive R&D with new super hard, long wearing alloys) of 2000 or better hours between TBO’s? It could indeed be what we’ve all been waiting for.

Technology is finally catching up to the ARV Industry, or so it appears. But who could guess that an Italian go-cart engine manufacturer might be the one to provide the cure for light aviation’s under-powered, over­ priced, or short lived engine blues?

If the KFM 112M engine can live up to it’s speci­fications (Editor’s Note: And lower it’s ex­cessive price tag) then light aviation is in for a true engine renaissance. 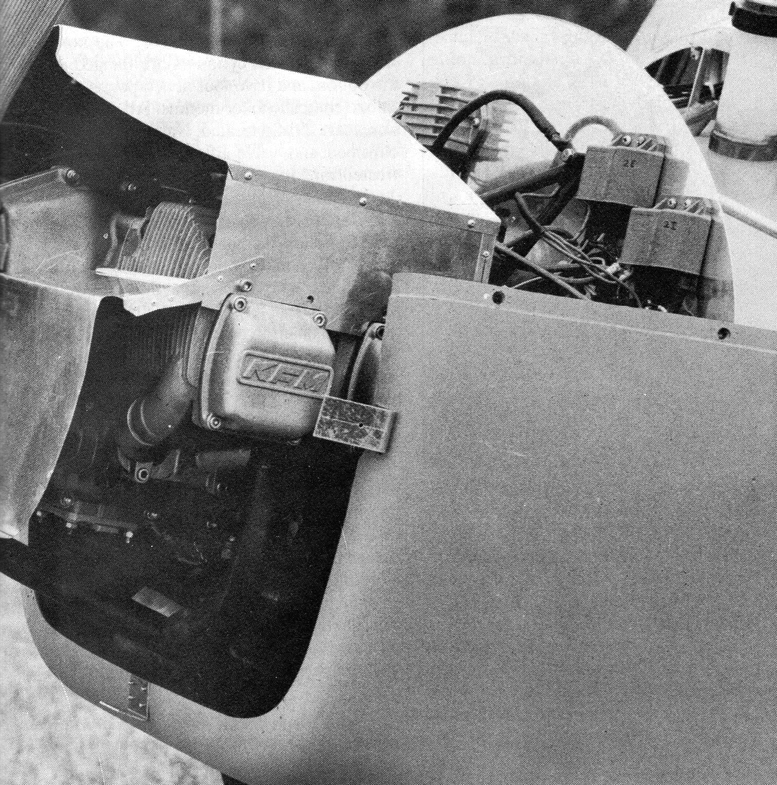 Required baffling, hoses and insulation definitely cause the KFM to fill this Kitfox cowling up the way no Rotax does. Is the redundancy and efficiency worth the extra bucks and extra weight to you?

And then let me take care of your second most pressing question, just who are these guys? IAME has been one of the world’s primary go-kart engine manufacturers for the last twenty-five years. Their two-cycle engines have been used in a variety of go-karts, as well as some self-launching sail­ planes (the KFM 107 engine is recommended for the Rutan Solitaire) and ultralights for some time now and are gaining in popularity.

Back in 1981 IAME saw the demand for a lightweight 4-cycle aircraft standard engine to fill the mid-horsepower gap — that’s the hole somewhere between 40 and 100 hp which many light high performance ARV’s and two-place ultralights demand. 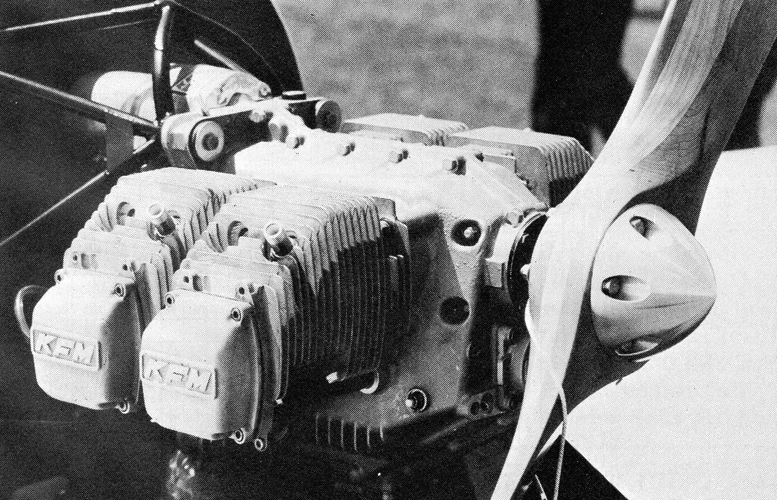 The KFM’s 1600 cc displacement and standard aircraft into horizontally opposed con­figuration makes it easy to shoehorn any of those low profile cowlings.

They produced a prototype called the KFM 104 packing a whopping 77 hp into a mere 163 lbs and have been flying it successfully on a Sonerai. The Volkswagen conversion engines used 172 lbs to get 70 hp. It was a start. Around 1984 they saw that the horsepower number most in demand was right around 60 hp. Again; they went to work.

Thus IAME came about to designing a 4 cylinder “real” aircraft engine which would complement their KFM 107 series of 2 stroke, 2 cylinder machines. However, their design criteria called for no ordinary 4 banger.

The demands of the Ultralight and ARV airCraft were considered exclusively. They wanted an engine which had minimum weight and bulk, a high level of reliability, no vibrations, a wide torque band, low fuel consumption, simple construction and a long TBO. (So who doesn’t wish for an engine like that?)

What IAME wanted in their engine was nothing new. How they got it, is interesting. First, considering the needs of light aircraft, it was decided that 60 hp would be ideal. Sixty horses is really all a two-place ultra­ light or ARV needs to properly climb out and cruise.

Economy and reliability demanded that a 4-cycle engine be developed. Herein lay the challenge. How does one de­ sign a 4-cycle that can compete with a 2-cycle’s excellent power to weight ratios?

Taking into consideration a precise study of combustion chambers, induction manifolds, valve timing and component life; the folks at IAME came up with an engine that has a displacement of a mere 1600 cc, a to­tal weight of around 117 lbs (that includes the starter, alternator and carburetor) which manages to develop just 60 hp at 3200 rpm in a simple direct drive configuration.

At maximum continuous power (54 hp and 3090 rpm) it burns 4.3 gph of premium au­to gas or avgas while at 70% cruise it burns a measly 2.97 gph. Now, if you put this engine in a machine that does around 85 mph at 70% cruise (like the Denney Kitfox) that means you’ll go an awful long way between fill ups.

Essentially, IAME met their design specifications to the minute, or have come darned close. How? Well, first off, 4 cylinders provided the solution for the low vibration requirement, as well as the smoothness of operation requirement (although the right propeller sure helps here as well).

By choosing the correct bore/stroke ratio of 0.71, inclining the valves in the com­bustion chamber and adopting short con­rods; a limited transverse bulk (less than 605mm) was achieved, thus coming very near the size criteria that had been originally laid out.

In the KFM 112 the cylinders and heads are formed in one piece of an extremely light but durable alloy material for minimum weight and maximum stiffness. The horizontally opposed cylinders are flanged at the bottom and have four attach points that utilize conical rubber mounts.

All cylinder bores are Ni-Si treated, valve stems are chromed and valve lifters are chromium treated for longevity. Lightness and reliability are furthered by the addition of a dual electronic ignition system. 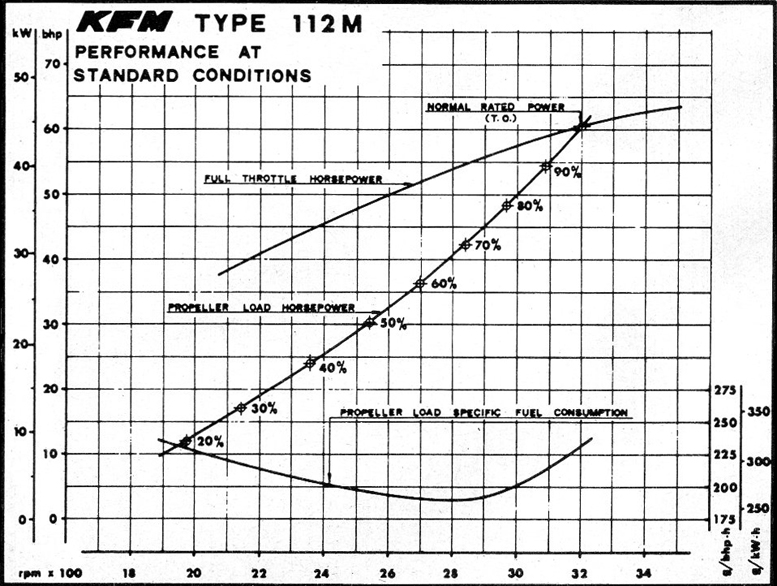 Check the graph out for yourself — that’s the picture of a fuel stingy little machine if you ask me.

Simplicity is enhanced by a crankcase that is forged in two halves including the oil sump and mixture preheating ducts, as well as a single piece forged nickel-chromemoly steel crankshaft that includes the propeller flange.

It has 4 main bearings and 2 thrust bearings allowing for either pusher or tractor mountings of the propeller. There is only one single piece camshaft gear which is driven by the crankshaft. Lubrication is provided by an oil pump driven by the camshaft.

The lubrication system incorporates a full flow oil filter with no external lines. There is a removable filter screen in the sump and an externally acces­sible oil pressure regulation valve. The induction system consists of a dou­ble diaphragm mechanical pump which is also camshaft driven.

There is one float type carburetor and a pilot manipulated altitude mixture control. The mixture induction system is contained partially in the crankcase, providing for mixture preheating. Whew! What does all this technical mess come down too? Believe it or not; simplicity, reliability and longevity.

The people at IAME took all of our dreams and, with the help of computers and new technology created the KFM 112M. But unfortunately, as far as ultralight and ARV owners are concerned, all this technology and R&D don’t come cheap.

Indeed, it is a more expensive machine, a little more than twice the price of the most up and coming two stroke of similar horse­ power — and equally more than a similar VW conversion engine (4 cycle).

However, before you jump to conclusions consider a couple of interesting contrasts. For one, redundancy. Yes, the Rotax has proven itself reliable. But you’ve still got one of every­ thing as opposed to the KFM’s dual ignition and 4-cylinders.

The Rotax starts to need major part replacement (especially that gearbox) somewhere around 500 hours, with a total rebuild necessary by around 1000 hours usage (though it’s not an expen­sive process).

Compare that to the KFM’s claimed 2000 hour plus TBO and simpler construction (they say that with the Ni-Si treatment 2000 hour cylinders show virtu­ally no wear — well, that’s what they say anyway).

The KFM is designed with minimal maintenance in mind, thus the electronic ignition, hydraulic valve lifters and elimination of torquing head studs (frequently a direct cause of cylinder deformation and reduction of overall cylinder life). Lastly, consider the operating costs of the two engines.

The KFM burns a mere 2/3 as much fuel as the Rotax in similar power configurations, and the KFM burns plain premium autogas or avgas. The Rotax requires the standard 2-cycle premixed fuel/oil combina­tion which definitely costs a bit more. 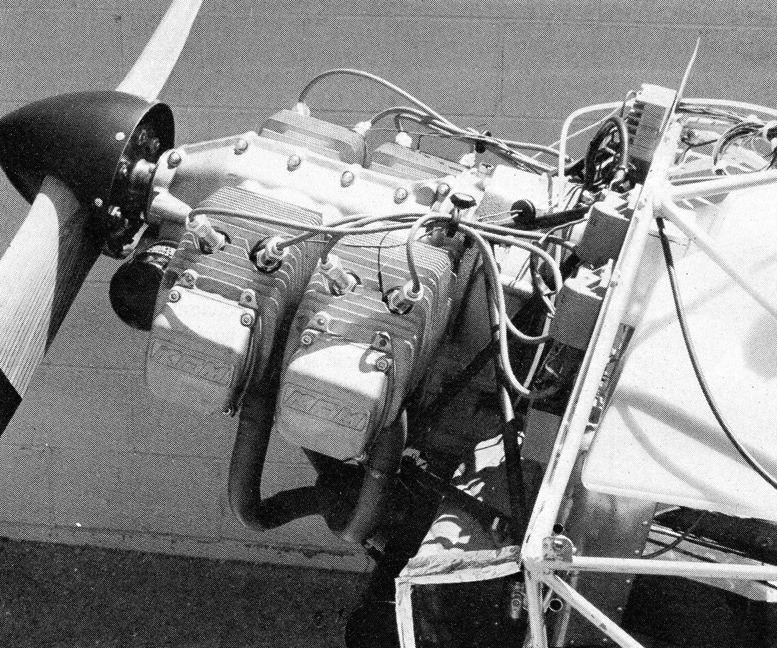 With a displacement of a mere 1600 cc, a total weight (with starter, alternator and carburetor) of 117 lbs and a power output of 62 horses the KFM 112 definitely comes out hav­ing a better power to weight ratio than other 4 cycle engines in its price range.

The KFM engine, like every engine that has sat on the edge of technology, has had it’s teething problems. Air filter and carburetor heat box positions had to be refined to deal with back-flow air and turbulence. Dan Denney is just on the verge of finding the right propeller for the engine (fixed pitch only, at this time there are no provisions for a constant speed propeller match up).

All those who have come before having been too coarse, resulting in reduced climb performance (but my, oh my, did it ever cruise nice at 85 mph on little more than 2 gph accord­ing to Denney). And the ignition system could do with a little refinement for easier cold weather starting.

In the end, though, it’s all in how you look at spending your money (and as with any machine, you’ll spend the cash anyway, now or later), or should I say, it’s all in what you’re looking for.

If you’re the kind of per­son raised on standard 4-cycle Lycomings and Continentals and the idea of little or no redundancy in an aircraft engine bothers you, then look into the KFM 112M for your flying machine. It does cost less than a Continental or a Lycoming, has a better power to weight ratio and a smaller displacement.

As well, with time, the KFM folks may finally get smart and bring the price down to a manageable and more affordable level. Hope so . . .

Considering the added safety, efficien­cy and longevity of what may well be the be­ ginning of a new generation of 4-cycle air­craft engines, the KFM 112 may still be worth it’s premium price. Only time will tell.