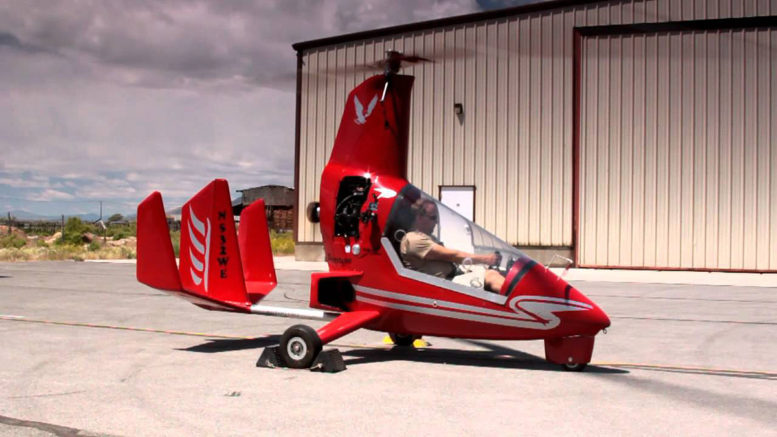 This gyrocopter is built with state-of-the-art techniques and building materials, achieves speeds of 130 mph and looks great

Before the WindRyder, a brief history of gyroplanes to start us off:

The autogyro was invented by Juan de la Cierva, a Spanish aviator whose C-4 “Autogiro” first flew successfully in January 1923. The autogyro, as a functioning, usable aircraft, pre-dated the helicopter by many years, and it wasn’t until the advent of World War Two and the subsequent government funding of helicopter development that helicopters started gaining favor and acceptance over the autogyro.

LEFT: Top speed of the Hurricane 100 is 130 mph. At this speed, cross-country trips in a gyroplane are now not only feasible, but also practical.
RIGHT: The WindRyder utilizes composite pre-molded structural components.

If it loses the forward speed required to maintain altitude, it will slowly lose altitude, but it will do so in a fully controlled manner instead of a stall. Since the airspeed over its wing (rotor) is relatively high, it is very insensitive to winds and gusts. 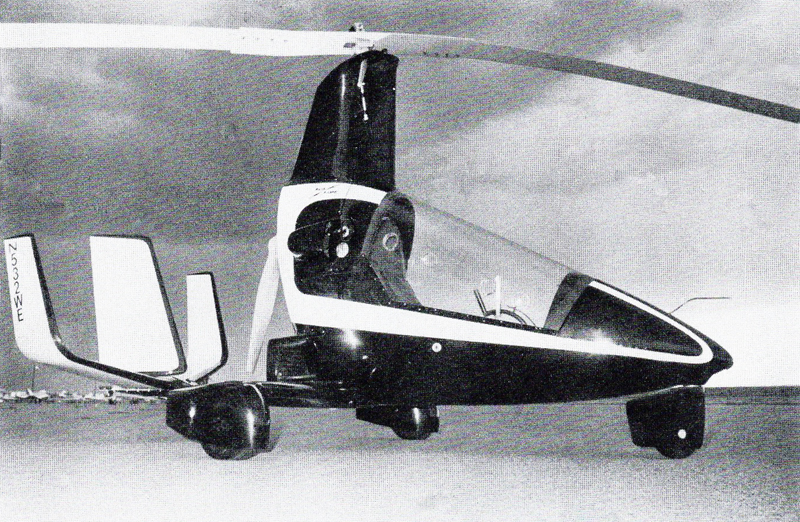 The main rotor receives its power in flight from the air moving upward through it. As the air passes through the rotor disc, it imparts a force to the rotors. The vertical component of this force is lift, while the horizontal component causes the blades to rotate.

The versatility, performance, simplicity and inherent safety of the autogyro have caused a fairly recent rebirth of interest from all areas. In the last two years, they have all but taken over the ultralight market and now, with the WindRyder, they are receiving attention from those with more serious aviation needs.

The rotors are 29-foot-diameter composite “Sky Wheels!’ Because of the unsurpassed performance and durability of this rotor system, they have captured approximately 90 percent of the market since they were introduced in 1984.

The blades are constructed from unwoven bi-directional S glass in a vinylester matrix, oriented at + and -45 degrees to span-wise to ensure torsional stiffness.

A full length 6061-T5 aluminum spar is bonded inside the leading edge of the blade which carries the majority of the tensile loads and provides the proper chord-wise balance. 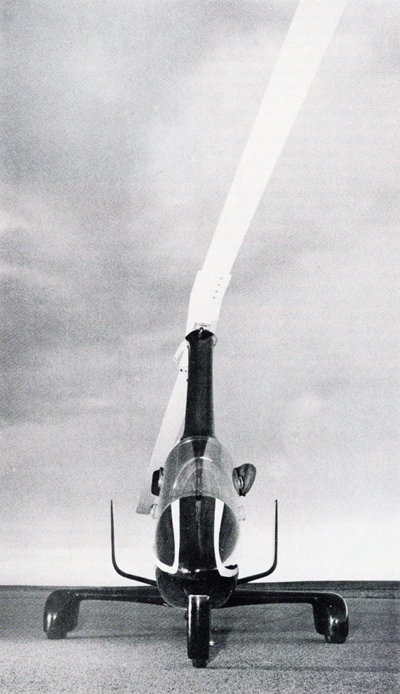 The WindRyder comes with a pre-rotator as standard equipment. This is capable of spinning the rotors to 200 rpm and this will get you off the ground in zero to two hundred feet, depending on wind velocity and direction.

The blades are designed for flight loads of three Gs with a safety factor of two. Designing a rotor system for an autogyro is a complicated process involving many parameters.

Changing one parameter always affects the other parameters, so compromises must be made. When trying to visualize what effect a particular design change or modification will have on rotor performance, it is always helpful to examine the lift distribution from tip to tip.

Any discontinuities or abrupt changes in this lift distribution will cause pressure differentials which will further mix or agitate the air after it passes through the rotor system.

Energy spent doing work which mixes or agitates the air is wasted work, and every effort within the limits of cost and practicality should be made to minimize these inefficiencies.

This mixing is caused by several interrelated occurrences, not the least of which include tip vortices, non-uniform lift distribution and a stalled and reversed airflow region located on the inboard portion of the retreating blade.

A smaller-diameter blade will rotate faster than a large-diameter blade on the same aircraft, and will have a proportionally smaller stalled portion on the retreating blade, but the higher disc loading will result in increased tip losses and an increased disc angle.

Also by twisting the blade, it is possible to obtain a more even lift distribution on the advancing blade, but this twist will cause the stalled portion on the retreating blade to increase in size.

These examples are not meant to confuse, but rather to indicate, the level of complexity of our ongoing experimentation, and the degree of our commitment to provide our customers with the best rotor system available.

They have tried every diameter rotor possible on the WindRyder, from 23 feet to 29 feet. Each increase in diameter has resulted in an increase in top speed, a lower slow flight speed, and a shorter takeoff roll.

A 29-foot-diameter rotor on a fully loaded WindRyder yields a disc loading of 1.1 pounds per square foot of rotor disc area, which is the lowest disc loading of any design on the market.

Disc loading which is one of the main Certification as a Private Pilot Gyroplane requires a Class 3 Medical Certificate, a passing grade on a written examination, 20 hours of flight instruction from a certified gyroplane flight instructor, and 20 hours of logged solo flight time.

An “Add-on” Private Pilot Gyroplane certification is possible with ten hours of logged gyroplane flight time, after solo privileges have been granted by an instructor. 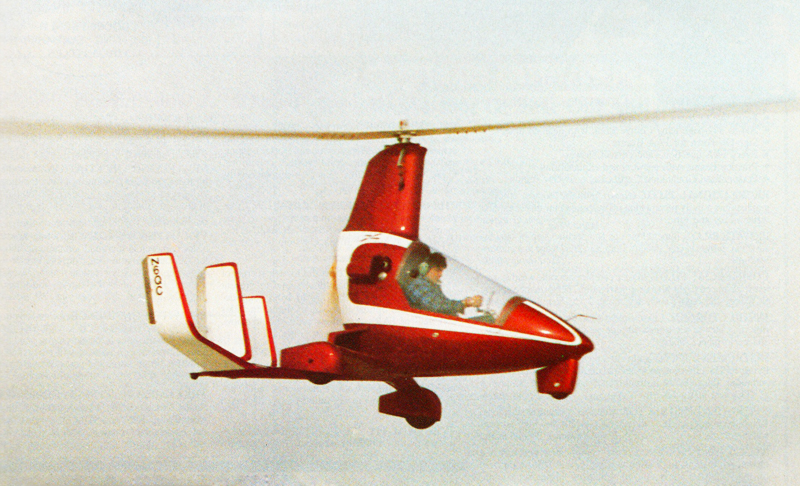 From every angle, the WindRyder sports the unmistakable look of advanced design and modern construction.

Because it is in the “single seat, experimental ” category, the WindRyder may be legally flown with a Class 3 Medical Certificate, once solo privileges have been granted by a flight instructor, or with a private pilot’s license.

Further information on both private and commercial pilot gyroplane licensing requirements is available in FAA Regulations Part 61. Once registered with the FAA, and operated by a licensed pilot, the WindRyder auto-gyro enjoys the same privileges as all other General Aviation aircraft. 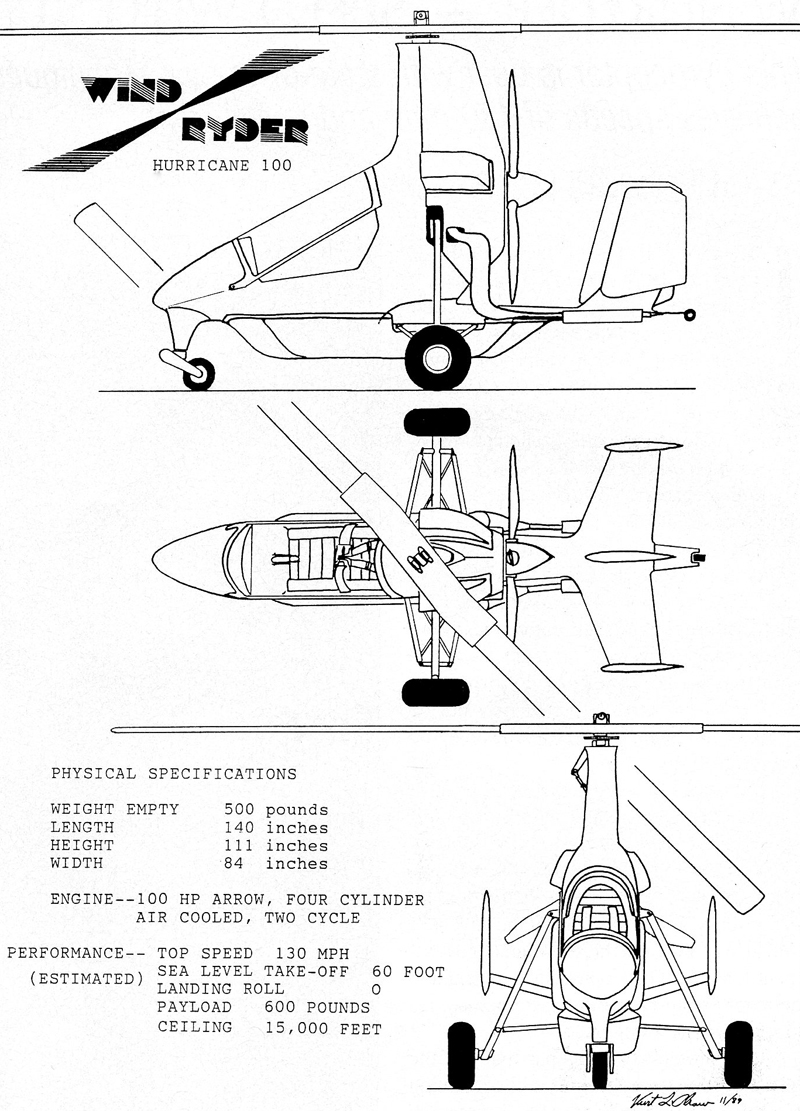