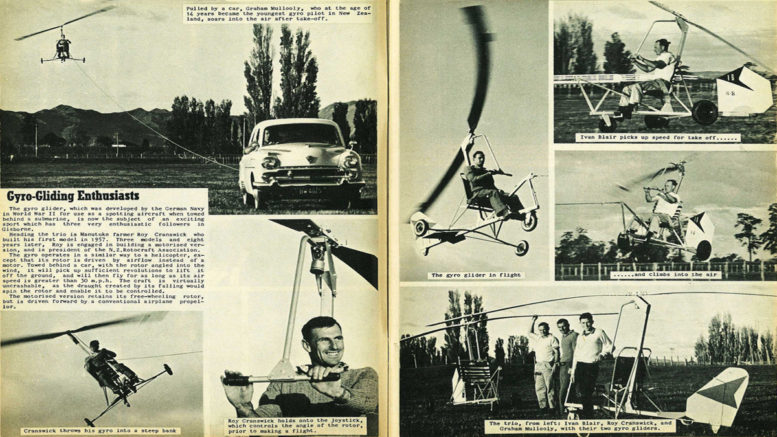 Dear Sir, I am a new member, and I wonder if my rotorcraft card from the sixties was the start of this organization or not. I am unable to find my card, I believe it was number 20 or 200? I am forwarding, with this letter copies of an article from the St. Petersburg Times of January 7, 1962.

I was unable to recall Dan Manning’s last name, and was hunting through everything I had left. Dan Manning’s signature was on my card, as President or some officer. I have not seen, nor heard of Dan for five or six years.

He was building a Benson 8, when he found me converting a Benson B-7 Glider to a B-7M with a McCullock 72 HP engine. I did finally get FAA to license it, after I moved to Cape Canaveral. I flew it a little but wish I had an experienced instructor.

A couple articles in your magazine sure would have helped back in the sixties We would low it behind my Metropolitan in large parking lots on Sunday mornings when there were no cars in the lot. I would start the rotor by hand, and off we’d go, but the rotor would not speed up. 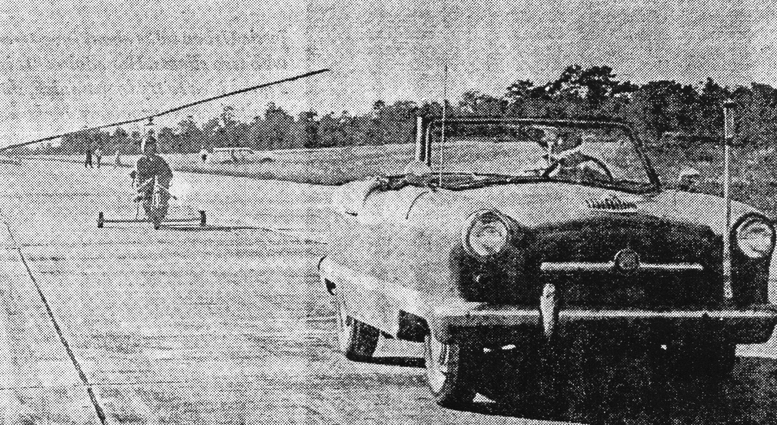 Gyro-glider towing technique is shown at left as Weeks (at the car wheel pulls the craft (with Warren at the controls) down the taxiway.

After several tries, I went back to Igor’s plans. Careful measuring showed that my angle of attack was off about 1-7’ degrees. So, I bent the 4130 inset in my homemade rotor blades, and went back. The rotor got up to speed so fast; I was up in the air about 30 feet, on only a fifty-foot towrope.

Fortunately, I had lied myself to the seat, because the TEE shape front control was backward from an airplane joystick. I crashed, on the right side, short of the tow car. I ground two fingernails off before my forward motion halted. The rotor blades were a mess. We threw all the pieces into a truck and scrammed before any police or spectators arrived.

Briefly, inspection showed no glue joints in the rotor blade had separated. You no doubt know Benson design was 1/8” 4130 Center, 3/4” to about 2” al base 1/8” aircraft plywood, top & bottom; spruce leading edge and part filler. All joints 10 to 1 scarf.

Before we tried again. I designed a front joy stick control and built new rotor blades, and got an experimental registration from FAA. You get an idea of the process and our results from the Times photos. I intend to buy a kit or used gyro now. 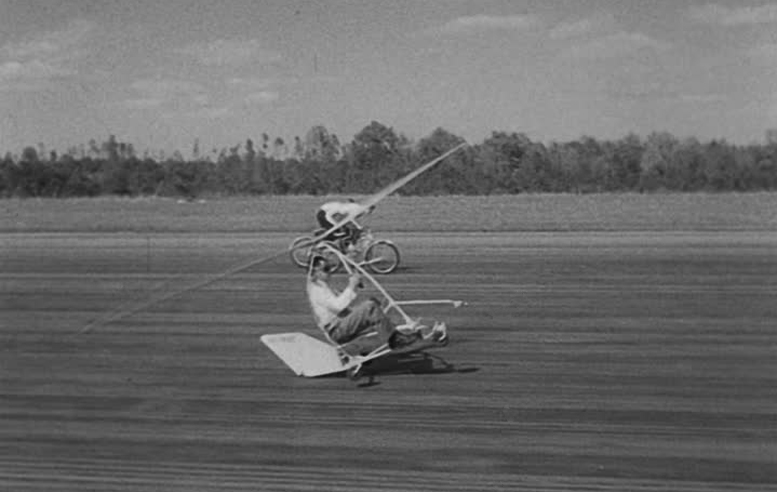 At the end of a wide weed-bordered taxi way at the Brooksville Airport, (St. Petersburg, FL) a small red convertible begins a mile-long run. Behind the car, a slender tow­ line stretches 50 feet back to a curious craft that instantly stirs memories of the Wright Brothers and Kittyhawk.

There sits the helmeted pilot, surrounded by thin air and a simple framework of aluminum rods. He is strapped onto his perch. His hand grips the joystick control. He and his odd mount roll along on three small wheels, beneath a huge, slowly spinning rotor blade.

The car picks up speed. The driver keeps calling the rate back to the pilot by means of a phone head­ set linked to that of the pilot’s. “We’re doing 20 … 25 … 30” The whistle of the rotor mounts to a whine as it bites into the wind. Suddenly the afternoon sun­ light is casting a shadow beneath the man and his machine as it kites up into the air.

The pilot levels it off some six feet up. Then he alters the pitch of the rotor blade and the machine slowly settles down to a landing as the end of the taxiway nears. The driver halts momentarily and the pilot beams with delight.

“How was it?” he asks, exuberantly. “How was it? It smooths out in your hand once you’re in the air!” Archie Warren, the driver, nods understandingly. This is big Dan Manning’s first solo flight in the gyroglider after many efforts to get off the ground. It’s a thrilling thing to “fly like a bird,” as Bob Weeks puts it.

The trio of St. Petersburg men is, in a way, low level astronauts. At the nearly deserted Brooksville Airport every Sunday afternoon the weather permits, they’re learning, by patient, careful experimentation, just how to handle the odd-looking craft. How come their strange hobby? What’s the big attraction?

“I got interested several years ago,” says Manning, a St. Petersburg auto agency executive. “I ordered an assemble it yourself kit from Benson Aircraft Co., Raleigh, N.C. Then I learned that Bob was building one.” (Other firms make similar kits. Makers of the craft say there are sev­eral thousand now in use in various parts of the world.)

Bob Weeks, owner of Custom Tin Shop, made every part of his gyroglider (as the craft is identified by the Federal Aviation Agency) except the main shaft, at a cost of about $250. Working with him has been Archie Warren, a city employee.

All three men have one thing in common they’re fascinated by the flying machine. And since it is a fair­ly new development among uncon­ventional aircraft, they’re feeling their way carefully.

“If we get these things fly­ing,” says Manning, “We’ll be able to train other people who are new at it. I’ve been trying to build a simu­lator on the back of a truck.” Both Manning and Weeks are familiar with planes. Manning once piloted light planes; Weeks was a ground crew engineer in the Army Air Force during World War II.

They’re learning the ways of the craft bit by bit: “You’ve got to have an engine for counterbalance,” they say. “We took off without one at first tipped over and cracked a rotor blade.”

Right now Week’s craft (the one pictured here) has a motor, but it is not used. The rotor blade, 20 feet in diameter, 7 inches wide, will lift 1,000 pounds. The aircraft itself weighs about 200 pounds.

Starting the rotor is a proposition calling for a man with strong arms. Cautiously, he pushes the big blade around and around; when it reaches sufficient rpm to begin catching the air, he ducks and moves away, as the car pulls the machine forward and the wind accelerates the blade to lifting peak.

In the future, the craft will rise into the air, the pilot will drop the towrope as it passes some 15 feet above the car, and then glide down to a long, slow landing. Hooking up the engine will come later.

You might think it a lot of trouble for a short ride. But Weeks, Manning, and Warren don’t; they get a big kick out of the business of mastering the gyroglider. “This is a real adventure,” the three friends agree. “This is the thrill of flying for the little man with a budget pocketbook.” 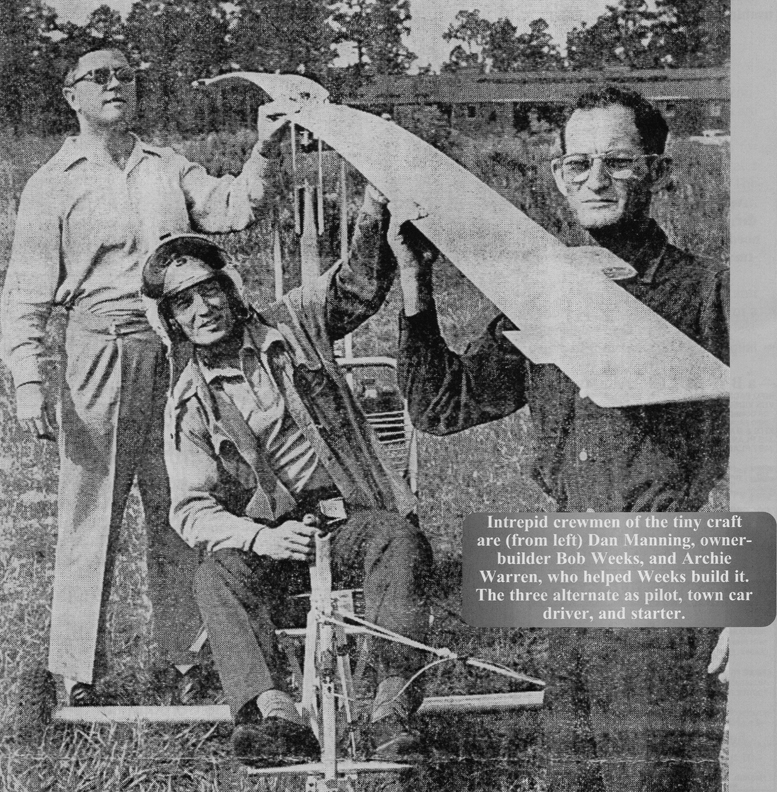 The above article first appeared in the St, Petersburg Times. Sunday, January 7, 1962. Text was by Dick Bothwell; photos by Bob Morehead.

The sequence of 5 pictures – (including upper image) shows Weeks dropping away from whirling rotor after hand-spinning it to high speed; then short flight as craft takes off and lands with Manning board. 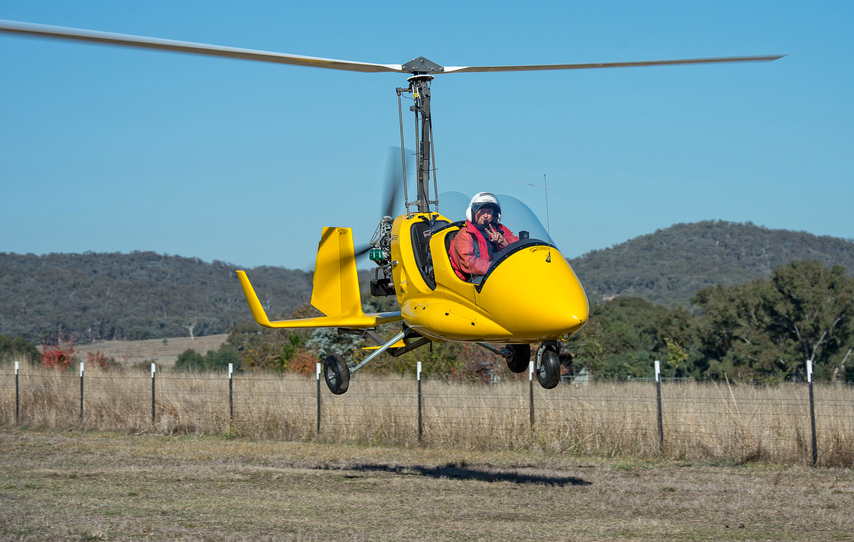 The eleventh in a series of articles by: Bill Ortmayer, CFI, CFII, MEI

In my last article I discussed One-Dozen Skills that you must be able to fly before trying anything advanced. In this article I’ll give you a listing of tasks and the sequence in which I usually teach them.

It is important to note that I am giving you some of my personal views and philosophy on how to attain the flying skills to meet the Practical Test Standards (PTS) for the FAA rating, Rotorcraft, Gyroplane.

It is not the only way. Other CFI’s can have a different approach based on their training equipment and airport facilities. This is perfectly okay. The bottom line is whether or not you can fly to the PTS standards. I’ll have more on the Practical Test Standards coming in future articles.

Flying a teeter rotor gyroplane involves some kinesthetic motor skills that need time to be developed into auto­matic responses. You don’t have time to think about it—it must be there automatically. You must coordinate both feet and both hands all at the same time.

A fast spinning rotor as you become light will over power the rudder authority. If the right side is low, the rotor will drag you off the runway to the right. That is where that mysterious crosswind came from that has claimed so many of your blades!

Because pitch control and rotor tilt is so important, I teach it first. You can not safely take-off and land without being able to control the basics of level wings for take-off and pitching for speed control.

Flying in the air is quite sim­ple. It does not take much time to teach air skills. This, however, requires you to be able to coordinate pitch and power and to orient your rotor disk.
I am fortunate to have three 5,000-foot runways with parallel taxiways to do a lot of ground and low-level work.

Low level work is important to establish pitch control. It is very easy to find and maintain a level-flying attitude at 10- 20 feet. You can easily see yourself gaining or losing altitude. At 200 feet you will never see or be able to appreciate what is really going on.

Therefore, what follows is my usual sequence of training tasks.

LOW SPEED/GROUND HANDLING: [nose wheel down; blades at or below a blur]

SPECIAL NOTE: Most of you do not know your rudder effectiveness with the propeller stopped. Reducing the engine power to an idle still provides steering air past the rudder providing directional control. With the propeller stopped, you will most likely begin to spin in the direction your blades turn until you drop the nose and gain enough airflow past the rudder to regain directional control.

CAUTION: This all may sound easy, but it is not. Be patient and master each stage of flying before ventur­ing on. The longer you are in aviation the more you find out you are never as good as you think you are.

Remember, “the air, even more so than the sea, is most unforgiving for the slightest mistake.” Get qualified flight instruction before getting into a gyro. Skillful pilots make it look easy, but it is not. 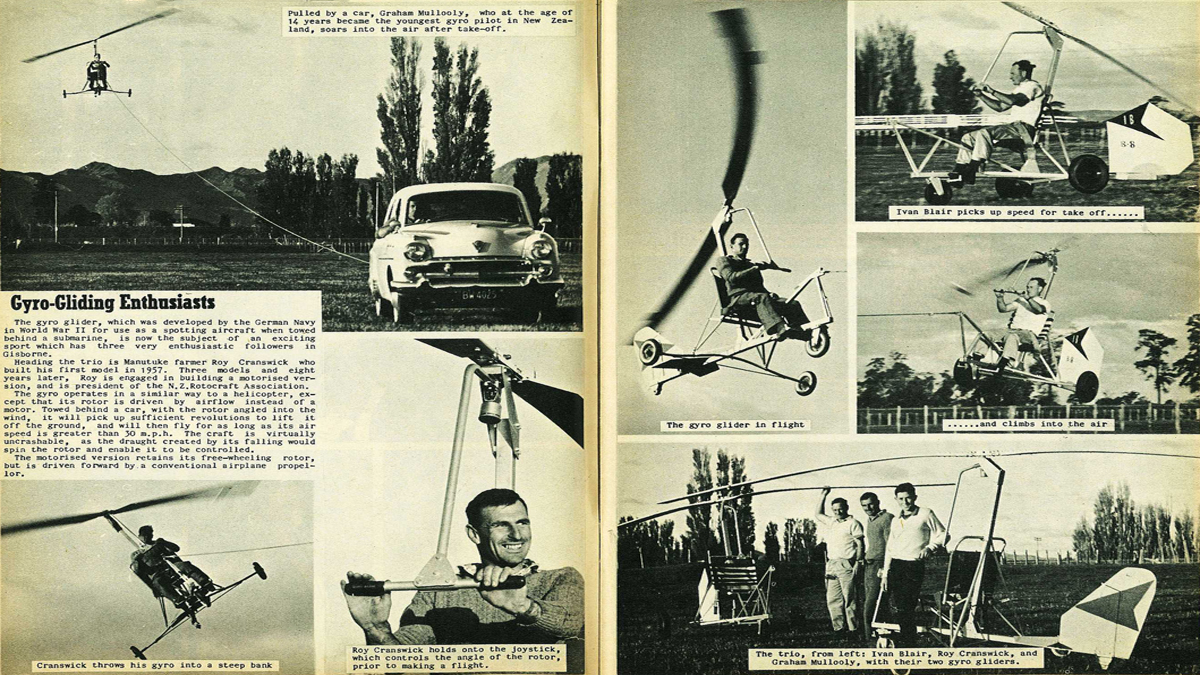 Article Name
Three Guys on a Flying Whatzit
Description
Gyrocopter pioneers, the true heroes of the aviation world - from the Wright Bros and many others of their time, it drove normal men to become aviators.
Author
Bob Weeks
SHARE TWEET PIN SHARE