This is an introductory article detailing my experiences as I build the first Aviomania Genesis Gyrocopter kit to reach the United States, the Aviomania Genesis Gyrocopter. The Genesis is a kit from Aviomania company out of Cyprus, owned by Nicolas Karaolides, who has many of these flying over in Europe. Now he is venturing out with a kit version for the US market. He is an aeronautical engineer and used his grasp of physics to design this centerline thrust gyroplane.

John Rountree had been carefully researching several fine gyro kits already out there, and our friend Leigh Ressasi told John at Bensen Days 2010 that he was impressed with the Genesis. John became the US distributor for the Aviomania Genesis Gyrocopter.

I was woven into the mix receiving the first kit. I had already checked Nicolas’s website many times, admiring this refreshing new gyro and very intensive flight videos that really demonstrate its dexterity and also the piloting skills Nicolas has.

This was a new venture for Nicolas who has a nice established pre-built market on his side of the Atlantic throughout Europe. Now he was in new territory, designing a kit that satisfies the FAA 51% build rule, and learning the logistics of economically shipping the components. There were unforeseen documentation requirements, dealing with US brokers and Homeland Security. John is now having all Genesis shipments sent to San Diego, CA, where the individual kits will then be shipped to their new owners around the country.

This Aviomania Genesis Gyrocopter build will educate us all on how to refine the shipping and building processes. I have had the opportunity to work on several gyros for myself – a Bensen, an Air Command, an RAF 2000, and a SparrowHawk. My latest project just completed last fall is a Helicycle that I am flying now. These build experiences and just my love for building another gyro found me gnawing on yet another gyroplane kit.

On Valentines Day this past February, I opened the first Aviomania Genesis Gyrocopter shipment. I was delighted to find huge drawings (right) in color, builder DVDs, and very high quality components. Many parts have the pilot holes drilled, and I bought a hundred sacrificial hardware store bolts for initial assembly.

The plan is to fully build this gyro, then disassemble it for powder coating the aluminum and steel, spray painting the composite parts, and polishing the rest. When all this is done, final assembly will be done with the supplied AN hardware. This will result in all new bolts, and none of the substandard work of taping bolts and nuts off, and spraying around them.

The Aviomania Genesis Gyrocopter plans are very large, with all the correct bolt sizes, washers, spacers, etc. clearly marked. Almost every part can be located quickly on the drawing, oriented right, and the cut lines and drill points figured out. This is a refreshing change from my past builds where I only had videos to watch, and few drawings or pictures to study. Also nice, Nicolas responds back very quickly with any answer I need.

My DeWalt miterbox with 80-tooth carbide blade cuts aluminum like butter. This is a compound miter saw, but a typical miter saw will suffice.

Another handy tool is my 12-inch bench disc sander, great for rounding corners of the aluminum, or sanding straight flats to the exact marks.

The project grew each hour I worked on it, with very little time lost trying to figure out the orientation of the parts and what size to cut them to. Many parts are already cut and have pilot holes drilled in them, while others have to be cut out of rough stock, drilled etc. so as to satisfy the 51% rule. 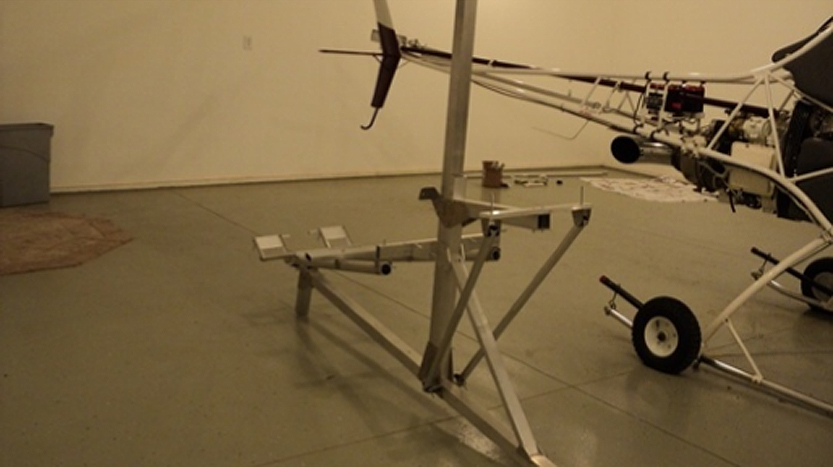 At the time of this writing, I am just starting on the Aviomania Genesis Gyrocopter spring suspension landing gear. Its beefy and fully adjustable for toe in/out and down extension.

Be the first to comment on "Building The Aviomania Genesis Gyrocopter"