Loving the Arrowcopter Gyrocopter : The love of Rotary wing flight is a common bond that draws us to this (Rotary Wing) Forum from around the world, our fellow members a diverse and fascinating group that bring with them an infinite variety of skills and life experiences to share. When Chris Kurz began telling us of an exciting new gyro being born in Austria we were interested, when we saw the Arrowcopter gyrocopter pictures, a lot of us fell instantly in love.

I do not believe in fairies, or something for nothing, but I do believe in love at first sight, and of having a dream. In the thread he posted, the proposed new machine was super hot sizzling eye-candy. It set pulses racing and a host of Forum members drooling, but it’s aims, and estimated price tag left most with the feeling that it would simply be a dream.

But dreams can be attained as all of us know. With a goal, hard work, bit of luck, determination the human spirit can and does achieve some pretty impressive feats, we see them on the Forum all the time.

Dietmar Fuchs is a gyro pilot who has flown Magnis and MT’s, but had a dream that he could produce something better.

Chris Kurz, another gyro pilot, had a dream of flying across the US in a gyro, then did so, enthralling us all as he took us with him. He, too, saw the ArrowCopter, and along with the rest of us, fell in love and promptly had another dream.

Dietmar Fuchs is sure he has produced something better, the Arrowcopter gyrocopter AC-10. Chris, by working with Dietmar and earning it with sweat equity, now has his own. I’m still dreaming, but do have a goal. After an invitation to visit the factory came Chris, with great generosity, offered to pick me up from the airport, put me up, and take me to the factory. How good was that? 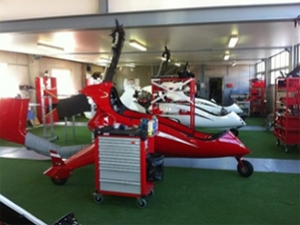 During the surprisingly long drive home, it was rapidly evident that besides being a totally committed gyronut – sorry, gyronaut – Chris is warm, humorous and multi-talented. At his home in Eisenstadt I met a gracious and charming Katharina and one of their daughters, Salina, before immediately being whisked off out to dinner to nearby Rust.

When Chris had told me that he lived in a good wine area, he wasn’t kidding. Some of the Austrian wines he picked out during the meal were superb.

Early next morning Chris and I were on the road for the FD-Composites factory (above) at Amstetten. The factory is a neat, compact, two-story structure set in countryside. Upon entering I was greeted by a line of Arrowcopters in varying stages of completion. After meeting Dietmar and most of the staff, Chris, who was now acting as factory spokesman, began the tour and I was given permission to photograph anything I wanted.

The atmosphere there is of quiet calm, and people who know their business doing just that. As Chris took me along the assembly line I began to see just what does go into making up the bones of the eye catching Arrowcopter gyrocopter craft this machine undoubtedly is. Without a big red “S” on my chest and lacking X-ray vision, I was not able to stress analyze the various parts I examined, but every single one was light, strong, and looked of uncompromising build quality. 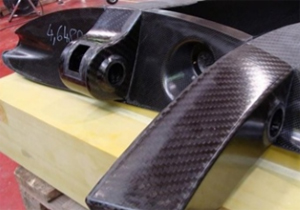 Carbon fiber parts (company photo) look good if done well. I should know. I built the pod for our Hornet from it, parts of which did come out looking as good as the ones in the magazine pictures and glossy ads, but in the end Stu and I chose to paint it, because I wanted to hide those unfortunate blemishes that had occurred due to overheating during the cure and showed up like pimples on a supermodel’s face. A great deal of these machines is carbon fiber, and all I saw was done to a high standard.

The ArrowCopter gyrocopter engine bay has a stainless steel firewall between it and the structure of the back cabin. After the firewall and rear cabin wall there is a shallow area that contains a lot of the wiring busses and sensor boxes, engine recorder and remote units for the MGL EFIS. There is a cover for that and then comes the seat back.

The rear occupant is therefore well insulated and shielded from both engine and the noise. With the seats out, panels in the floor allow access to wiring, fuel lines at the rear coming up from the fuel tanks in the stub wings and the large, thick, push-pull, aircraft-grade cables that actuate movement of the rotor head. I know some people have expressed reservations, however these are very thick aircraft grade assemblies and I, having seen them, would have no such apprehension.

As we moved slowly along the line of fuselage sections starting from the unit least assembled I watched a whole nose wheel assembly removed in minutes for adjustments. A main wheel removed in minutes to disassemble and change a tire. In the nose section the instrument panel and all instruments were very accessible for removal or inspection. Part way down the line I came across a Ferrari red model being worked on by a man and his two sons.

I had noticed on arrival that Vienna is presently celebrating the 150th anniversary of a very famous 20th Century painter, Gustav Klimt, and as for Carter I think that almost every member of the forum is aware of who they are.

Claudius continues to practice emergency medicine on a part time basis. He served in the Maryland Air National Guard and retired after 22 years as a Col. He has his SEL, SES, MEL and Instrument pilot ratings with over 2300 hours of P1 and has built a twin engine kit AirCam N119CK. His fascination with the Carter slowed rotor compound technology had led to extensive volunteer contributions on the Carter team to help bring the concept to production. 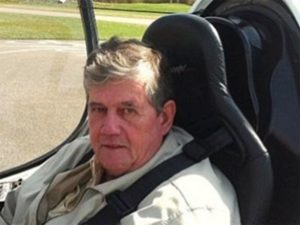 Arrowcopter has been forward-thinking in recognizing the present US impasse on factory built machines and is, along with the factory built models, producing it in a kit form that will allow a builder to satisfy the 51% rule and build his own machine.

Claudius was there doing just that. His brand new, just delivered Rotax 912iS was sitting on the stand waiting to be installed and he is extremely enthusiastic about this machine. I have a feeling it won’t be long before it is ready to take to the air.

Extensive damage is reported after a fire at the production facility of Arrowcopter.

“Due to a fire in our production facility in Zeillern/Austria on March 31st we will be busy with cleanup in the next days and our availability by phone will be limited. We are already working hard on continuing with production. As a result of this incident we will not be able to attend Aero Expo in Friedrichshafen this year.”

Area press was reporting about 110 firefighters responded following numerous emergency calls from the public. There were no injuries reported