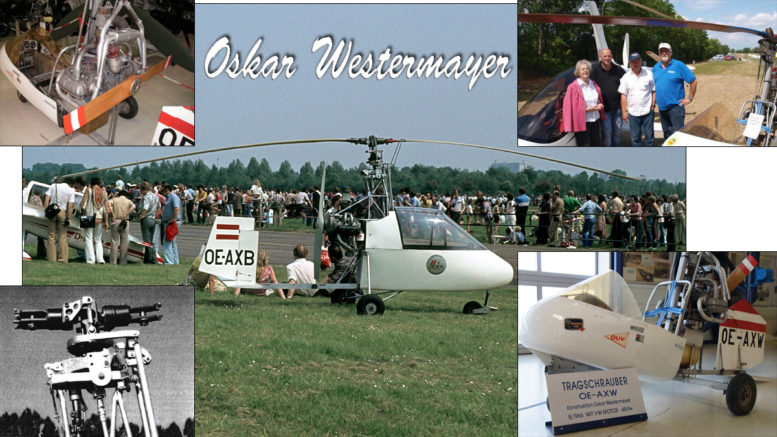 The following article appeared in an enthusiast’s publication in 1989. The author, a friend of mine, has given me permission to reproduce it in this magazine, providing I do not mention his name. 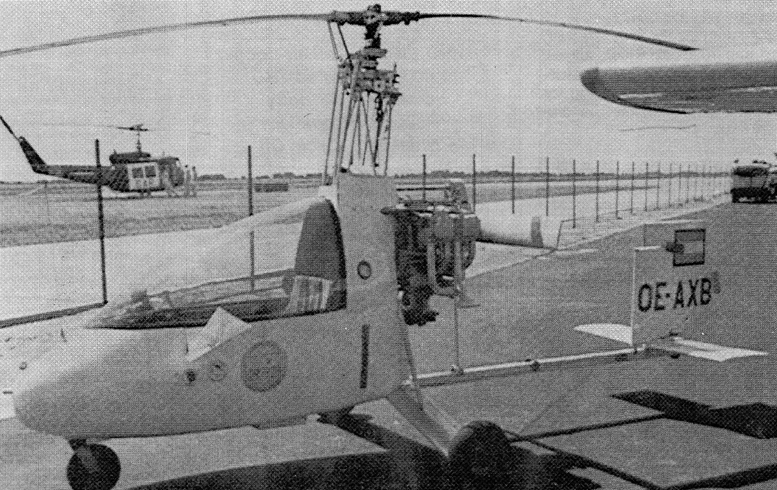 OE-AXB Westermayer WE.4 at the Hanover Air Show in June 1986

The late Oskar Westermayer was at one time the Austrian Director of the International Gyroplane Association, a rotorcraft builder, component designer and constructor and a man that carried out pioneering work upon aviation engines for fixed wing aircraft. RB.

In 1966, Herr Westermayer bought a Bensen 8KC kit, built the machine himself and flew it on its first flight in November of that year. His experiments in that machine soon encouraged him to start on a program of rotorcraft construction which would enable him to bring his ideas — which at that time were well in advance of anything else in that field — to fruition.

In 1967, Westermayer began construction of a gyroplane somewhat similar in general configuration to the Bensen B8M. However, it incorporated several of Westermayer’s own ideas including his ‘rotor pre-flight spin’ (whereby the rotor is rotated before takeoff is commenced), his own rotor blades, and a Volkswagen 1800cc engine developing 65hp.

Initially the rotors were made of wood, but these soon gave way to advanced rotors of Westermayer’s own design and construction of compound materials capable of accepting a static thrust of 130 Kp’ and a V max of 125km.p.h. Construction of this machine was completed in 1969.

At first there were weight problems, which were soon overcome, but with experimental flying not being per­mitted in Austria at that time, the preliminary testing was confined to ground runs on “an aircraft road of two kilometers in length”. All this work was carried out under the watchful eye of a Doctor of Engineering named Ernst Zeilig.

In May 1970, permission was obtained for 40 hours of test flying and the gyroplane was than officially record­ed as a “Type B. 8M Austria”, and embarked upon its flying program. This was successfully completed on 10th of July 1970 and a public presentation to Austrian press, radio and television was made in that month.

Formal registration of the gyroplane followed under Certificate of Registration Number 1655 issued to Herr Westermayer at Poysbrunn. He retained OE-AXW for anoth­er 10 years before transferring it, in January 1981, to the Flugsportverein Fliegergruppe Weinviertel at Mistelbach.

This was a much longer structure, with twin fins and rudders, which served only as a test bed for further development of advanced rotors, catering for automatic change of pitch from the ‘pre-spin’ to ‘inflight’ mode.

The third gyroplane of Westermayer’s own construction was registered to him under Certificate of Registration Number 1992 issued in May 1976. Fitted with a Volkswagen 2600cc engine, it was intended initially as a flying test bed for different styles of rotor head projected for incorporation into the model WE 04.

In 1982, the engine was the W5/3 of 85hp replaced in 1984 by the W5/33 of 100hp. It was however, developed in its own right and, having started its life as a wooden open cockpit machine, then graduated to a fiberglass cabin gyroplane of quite sleek lines.

The fiberglass cabin was to appear again in the model WE 04, and in March 1983 OE-AXB was registered as a model 04. The tail plane, fin, rudder and mainframe were quite different in appearance from those of the earlier models but did not change during the development of model WE 03.

The model WE4 represents the last stage of the development of the Westermayer gyroplane and is indeed, a single seat cabin rotorcraft of unusual quality. All of the advanced features were included, being compound structure rotor blades, a patented rotor head of ‘helicopter type’ giv­ing variation in the pitch of the blades, rotor spin up to 500 rpm before takeoff, metal fuselage and fiber glass cabin with side hinged canopy allowing entry from the port side.

The tricycle undercarriage is non-retractable and is supple­mented by a ‘bumper’ wheel at the rear end of the tail boom. Both the tail plane and the rudder are of wooden covering.

The 2600cc Volkswagen engine has been retained but now develops 70hp which, driving the two blade, fixed pitch, wooden propeller, allows a top speed of over 90mph and a cruising speed of 75mph, the takeoff run is less than 35 feet. In 1985 the W5/33 engine of 100hp was installed.

Certificate of Registration Number 2153 was issued in respect of OE-AXR in June 1978, to Herr Westermayer with whom it stayed until January 1981 when it joined its sister OE-AXW with Flugsportverein Fliegergruppe Weinviertel at Mistelbach for two years, returning to Herr Westermayer in January 1983. He kept it for three more years until January 1986, when it was again registered to Zlugsportverein. This machine was displayed at the Hanover Air Show in 1986. 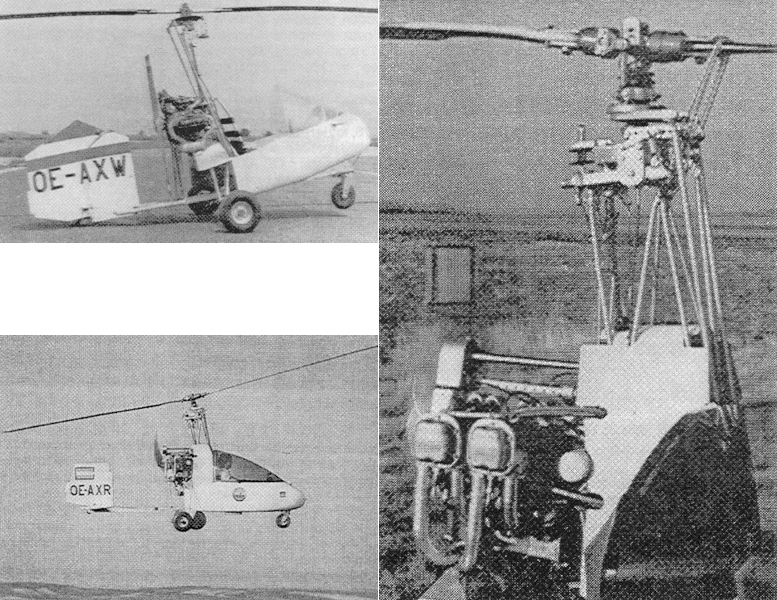 To bring the project right up to date, the Westermayer WE4 was to be offered in an emerging movement in Germany as the SPH Centurion. However, due to the difficulty of controlling the jump takeoff characteristics, it was found not to be suitable for novices. Instead, there was to be a study in redesigning the complicated rotor head and do away with the prob­lem, the enclosed cockpit seemingly attracting many admirers of a more comfortable and weather protected machine. This has subsequently been abandoned and the aircraft de-registered and for the time being stored. Herr Westermayer’s inventiveness was not confined to rotorcraft and their components however, and his attention turned to engines for fixed-wing aircraft, their performance and fuel economy. 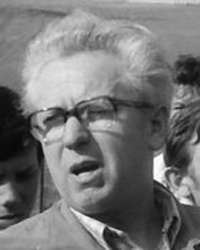 Be the first to comment on "Oskar Westermayer Designer Extraordinary"