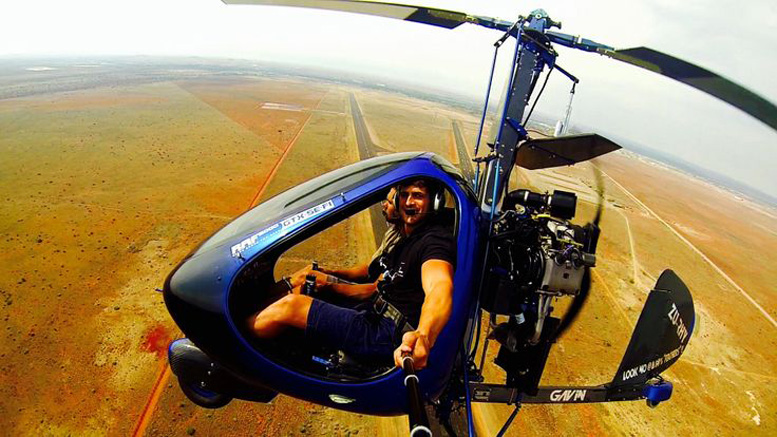 When I’m wrong (and I’m caught at it), I freely admit my error. One of my most strident statements about flying was proven wrong a while back at the EAA’s Sun (and/or) Fun Fly-In.

It was a saying I’ve always uttered when offered a ride in a teeny-tiny ultralight: “No thank you, I have a policy of never flying an aircraft smaller than I am.” You have to understand that I consider what I usually fly to be normal-sized aircraft: 767s and MD-88s. (Actually, if you really want to know the truth, I consider the MD-88 to be a little on the small side.)

I am hip to the fact that for almost a hundred years humanity has been strapping on all sorts of smallish craft and splitting the skies (or whatever) with the splendor of miniature powered flight. It’s just that I didn’t see much utility in my doing so. For one thing, I had done pretty well over the years airmanship-wise by flying things like DC-9s and seven twos.

They have a “solid” feel to them, if you know what I mean. Secondly, since I have no confidence whatsoever in my ability to build things, why should I trust John Q. Lugwrench to homebuild a sky chariot that wouldn’t kill this homeboy?

Having said that, I have to say that I am in utter awe of you people that can “spavin the mainmast” and “epoxiate the boomfrundle of the sparistic vortalom.” Much to my Dad’s chagrin, I never got the mechanic gene and have embarrassed him over the years by actually having pieces of my car fall off while going down the highway.

Dad, by the way, was and is an ace mechanic (USN aviation 1945+) and never met an engine or airframe that wouldn’t bow down to his expertise. I must have had a weak moment during Sun & Fun because I strapped on and aviated in-get this-A GYROPLANE!

I know, not big stuff for you guys out there in the crowd that backpack a lawnmower engine tied to a parachute and fly, but for me it was a major breakthrough in my aviation “religious life.”

It must have been the hot sun. Or maybe it was that I saw all my other media-type friends plying the skies in various and sundry air machines, but I felt the need to fly something new.

When Daniel Haseloh of the Rotary Air Force (RAF) caught me skulking around “chopperville” and peering into his company’s demo-bird, the RAF 2000 GTX, it took me back a good twenty years. I was a ramp tramp again. I had spent years of my young life hanging out on ramps and for a moment I felt like a fuzzy-lipped, pimple-faced air newt.

Once I flashed my US AVIATOR press card at Daniel and uttered some professional pilot code words like “DUAT” and “retreating blade stall dynamics” he knew exactly
who and what I was: lost and without a clue.

That’s right, readers…the old Clue Bird hadn’t landed on the “Kever” yet and I couldn’t see how this little gee-gaw flew. I remembered that years ago in mags like POPULAR MECHANICS I read that you could buy a cheap kit and build your very own gyroplane at home.

It had no engine and was towed behind your family Edsel. I always figured that people who did that sort of thing were probably looking for a quick exit from this existence into a similar-yet-not-quite-so-tacky universe in their next life.

If you don’t know how a gyroplane flies (and after knowing me this long you still think I can explain it to you), here it is: remember those little seeds from some kind of tree- a maple, I think? Yeah, you’d drop those seeds from your tree house and it would fly like a helicopter down to the ground, right? Wrong.

It flew like a gyrocopter or gyroplane. The air passing through the winged seed made it rotate and the rotation made it an airfoil. If it were a helicopter the seed would rotate on its own and would work as an airfoil that way.

All you have to do is add an engine to the back of the seed and you have your basic gyroplane. Understand now? No? Well, I don’t blame you. Daniel explained to me that not only was the gyroplane a safe and solid concept, but that he personally had flown them and had come back to tell the tale.

I won’t bore you with all the wonderful features of this aircraft, even though I believe in them with the same faith that I believe in doggy heaven, because I’m not qualified. It would be like a freshman psych major trying to explain the Vulcan mind-meld to Mr. Spock.

If you have technical questions please call Dan. This man knows all and sees all when it comes to gyro flight. Please don’t mention that I was the one that put you on to him; his gratitude would probably embarrass me and I can’t handle all the referral fees that would probably wing my way.

Anyway, I found myself actually begging for a ride in a craft that would fit easily into the back of my Dodge pickup truck with room left over for a spare rotor and my daughter s little league team. Definitely not my usual style-I’m a meat-and-potatoes, big airplane guy–but this thing simply looked like too much fun to pass up.

I had all kinds of wacky childlike aviation dreams while waiting for Daniel to give me a ride. The RAF 2000 would fit very nicely into my barn and would fly easily in and out of the small fields that adorn my tiny horse farm.

I could fly it up to CVG to work! All the other pilots would delight in my verve and skill as I auto-rotated my bod down to terra firma and took the controls of the next MD-88 bound for JFK!

Dan led me to the cockpit of the RAF 2000 and explained to me over the intercom as we taxied out that it would only take a little over a hundred and fifty feet for us to become airborne. 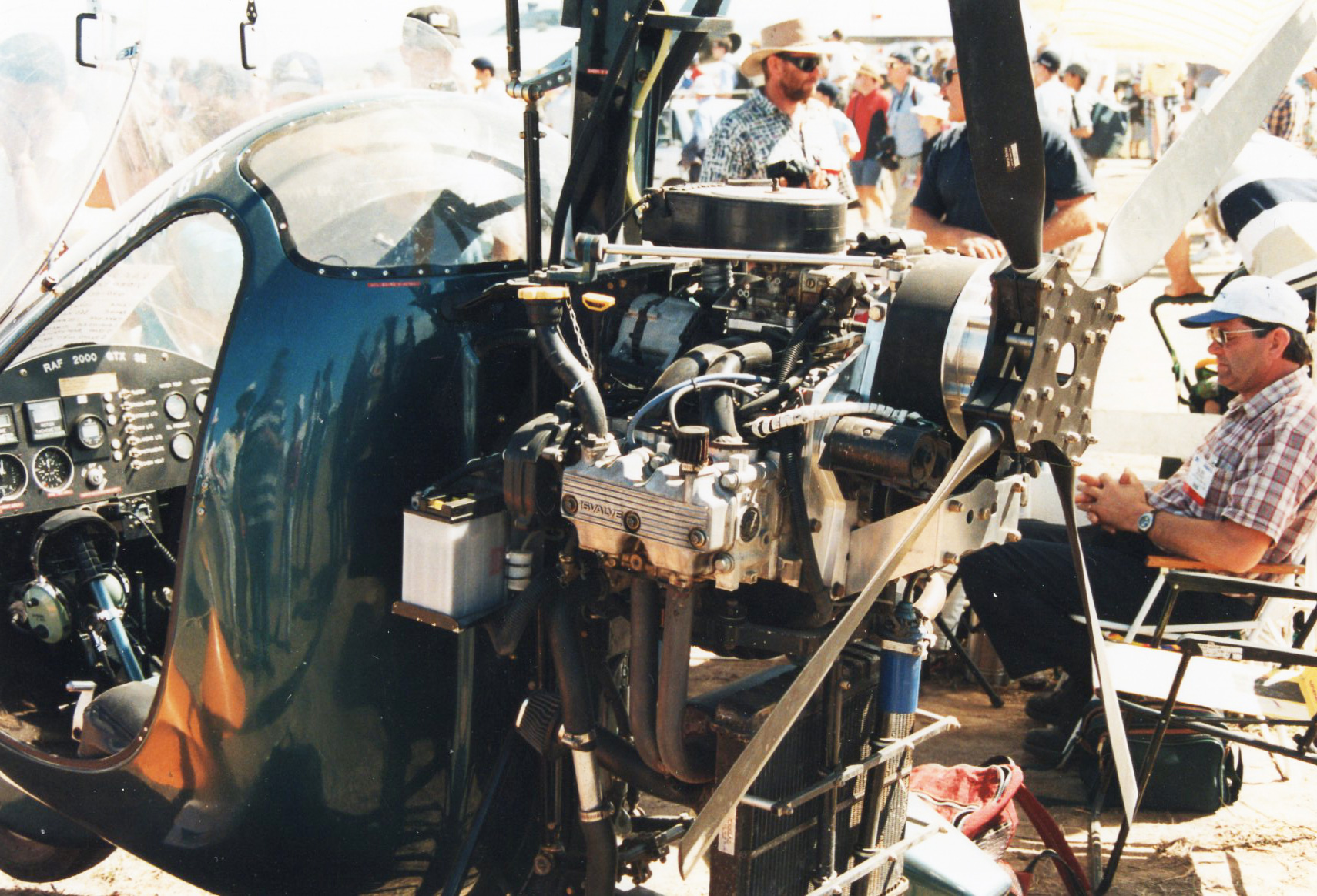 I pushed the talk button and heard myself say in a calm airline-pilot-like tone: “Huh?” because I didn’t have the headset firmly on my head. The power of the rearward-facing Subaru 1800 cc engine came up to full blower and we were off and flying.

I had my eyes open the whole time and am here to tell you that the ride was one solid HOT DAMN from start to finish. As we flew out over the cow fields (and cow doots) of central Florida, Dan impressed this turbojet pilot by showing me that the RAF 2000 can stay in the air at zero knots.

Evidently gyroplanes never stall; they just descend. He then showed me how to do a zoom climb over an imaginary water tower and my grin muscles went into cramps. How the hell had I missed all this fun over the past few years?

What had been going through my mind when I piously chanted my cute yet inane phrase about aircraft smaller than my sorry chubby butt? We cruised in for a two-foot landing roll and I was one happy journalistic camper. I had seen the light, yea verily, brothers and sisters. I was a new man, reborn into the possibilities of flight.

If you enjoy rolling your own and building your aircraft and want to have a great time in the sky for about 20 grand, give Dan a call and get started. By the way, I was kidding about your not mentioning that you read about it in US AVIATOR.

Oh yeah, what did I do after this catharsis? What was my next stop in my mystic aviation revival? I did what any self-respecting media guy would do. I went down to the warbird area and spent the rest of the week begging for a ride in the PBY. 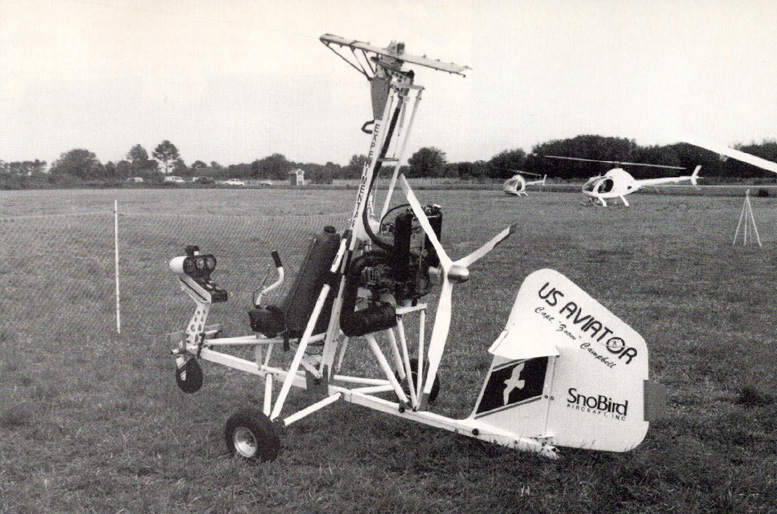 The Zoomer is a gyro-junkie too! This is his new Snobird 582 powered gyroplane…soon to be seen terrorizing the skies over Winter Haven. Florida. Zoom had the honor of learning to fly gyros with Igor Bensen himself about ten years ago!

Be the first to comment on "RAF Gyroplanes – An Editors View"