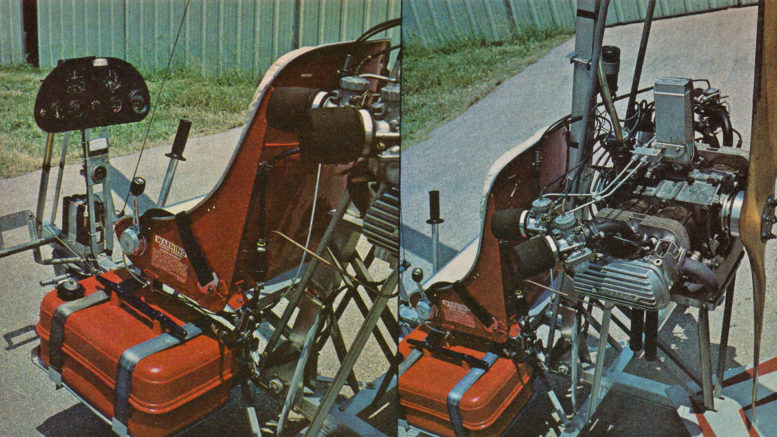 December 1978: This pilot graduated from hang gliders to his own gyrocopter.

….Several years ago I was all ex­cited about building my first flying machine.

It would not have wings but a large fan would keep me up when required. I have since changed my mind and build things that run on the expressways with an engine and four wheels. The other day I met a fellow that wanted his flying machine and went ahead with his dream.

Thirty-nine-year-old Gary S. Cotter of St. Louis, Missouri, got his feet wet in flying, with the building of a hang glider kit. However, he soon discovered that flights lasting only 90 seconds were the maximum endurance record.

All that work and short flights made for a desire of pow­ered flight. The Bensen Gyrocopter was the answer for the Missouri enthusiast. He tried other designs but Bensen had the answer for Cotter. 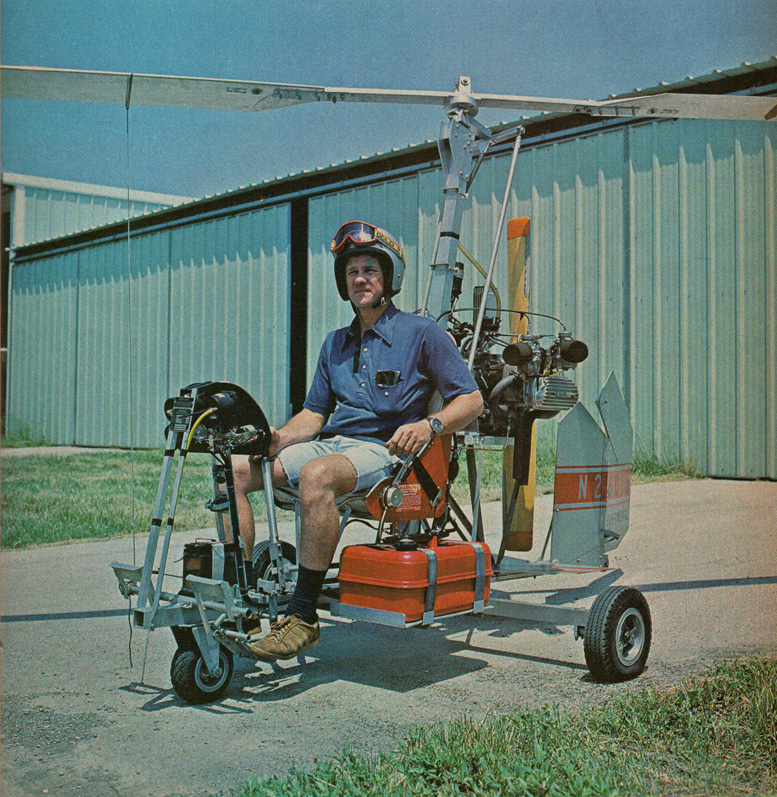 Looking over the St. Louis-based craft Gary explained that, “I heard there was a gyrocopter club around here but didn’t know just where. A local TV station carried a program on gyro flying and through them I located Bob Lindsay of the St. Louis Rotor­ craft Club Inc.”

Gary told me he and Bob talked for about three hours with the result that the following Sunday Gary went to Columbia Bottoms Airport for his first flight in a gyrocopter trainer. He was soon convinced and started collect­ing material and plans from the club. He was on his way. 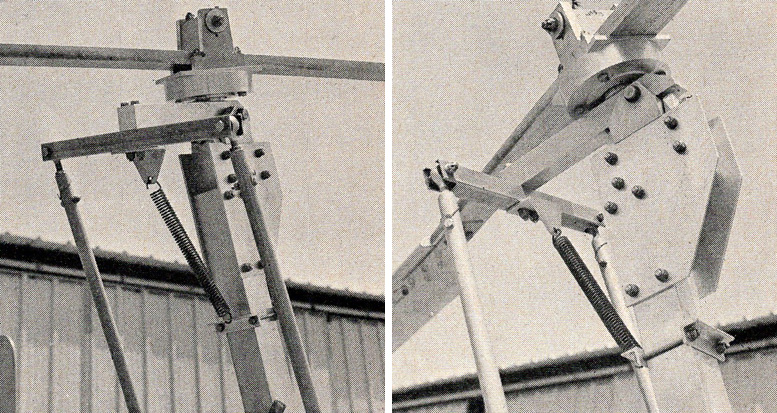 Details of rotor blade hub controls. Hub was machined by club member Willard Meyer of St. Louis. The most important part of the aircraft must feature fine workmanship for the safety of the pilot and crew, if two place. Aluminum plate and square tubing is used.

The first order was for the rotor blades and the propeller. In the meantime Gary began to fabricate the airframe, rudder pedals and the rudder. Inside of a couple of months, work began on the building of the 130 hp VW engine.

Gary told me that the engine was the biggest problem of the project. The engine mounts were a puzzle and much research and trial and error were carried out before the correct combination was discovered.

Now that the engine was mounted as well as the seat and instrument panel Gary was ready for his first FAA inspection. It was okayed with the exception of three minor write­ ups, which were corrected in short time.

Now it was well into the St. Louis winter and the pilot ground school course would keep Gary’s mind busy while waiting for the rest of the ordered parts. Surely one of the most important parts, if not the most, is the gyrocopter propeller hub.

You have problems here and you are really in trouble up­ stairs. Willard Meyer started on Gary’s hub and with his (Willard’s) experience and engineering the duo made a great breakthrough in VW powered gyrocopter aircraft. Three weeks later the engine was started for the first time. At this time the copter was about 90% completed.

While the popular VW mill ran like a watch there were a few bugs present. The club nicknamed Gary’s project the “Arabian Special” as there was a small oil leak in the Bensen hub design. Of course certain air­ cooled engines do use a little more oil. 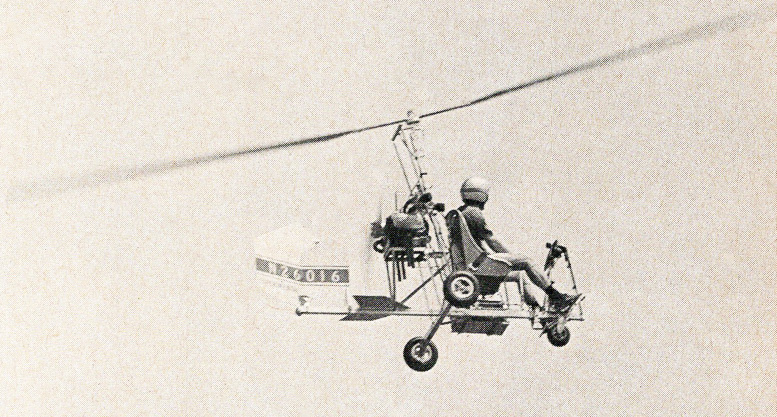 Following a club meeting one chilly spring day Ted Sanders, Wil­lard Meyer and Gary Cotter hang-tested their machines for head-plate measurements. Flight time was near. A week later found the Cotter gyrocopter at Creve Coeur Airport for the first ground tests. The local FAA inspector was called and Mr. Riddle signed the ship off with flying colors.

Gary was now assigned his training area. The ship was now 95% complete and according to Gary, he had 30 hours in the club trainer and safety rules were coming out of his ears. “I can’t thank my instructors and all the club pilots enough for all their tips and experience that was passed onto me.”

Gary was explain­ing the various parts of his aircraft to me and was very strong in his ideas about proper training before trying to fly his type of rig. The importance of proper training can’t be stressed enough according to this Missouri pilot. 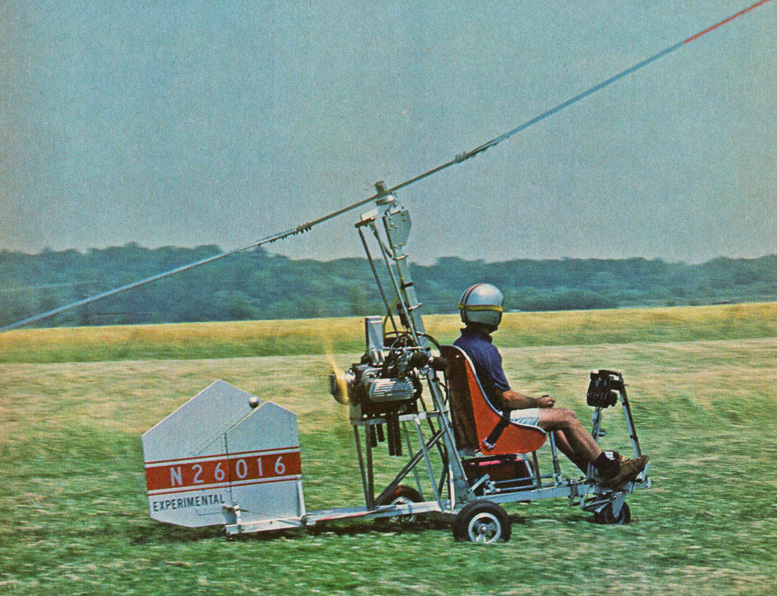 I asked Gary if on his first flight he ran into any problems. “Well, I flew my gyrocopter for the first time with supervision all the way.” Gary smiled as he recalled that he was cocky about the first time aloft.

“The powered machine was ready and I thought I was ready to conquer it. The machine soon showed me who was master the first time.” Gary had proceeded down the run­ way about 25 mph when the nose­ wheel leaped up and Gary stopped dead in his tracks. 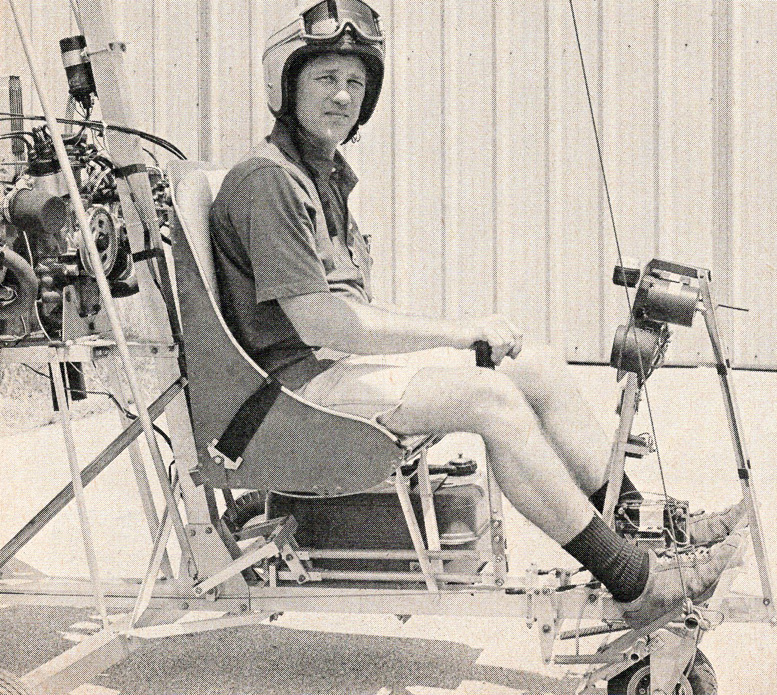 Builder-owner-pilot Gary Cotter and his gyro flying machine. Built over a one year period at a total cost of $4,500 (1978) the ship and pilot have 60 hours to date. Standard aircraft type controls operate the large rotor blades. Dressed for summer flying in St. Louis area!

“I couldn’t believe what had happened. The stick, compared to the trainer, felt like it was spring loaded with extreme force to the up position. My arm was weak from trying to fight the stick. This, combined with instructing for three or four hours earlier, was too much. It was all I could take.”

The following weekend Gary ar­rived at Creve Coeur Airport with his craft and the result was more suc­cessful. After a few trial runs up and down the runway he began to get the feel of the machine. 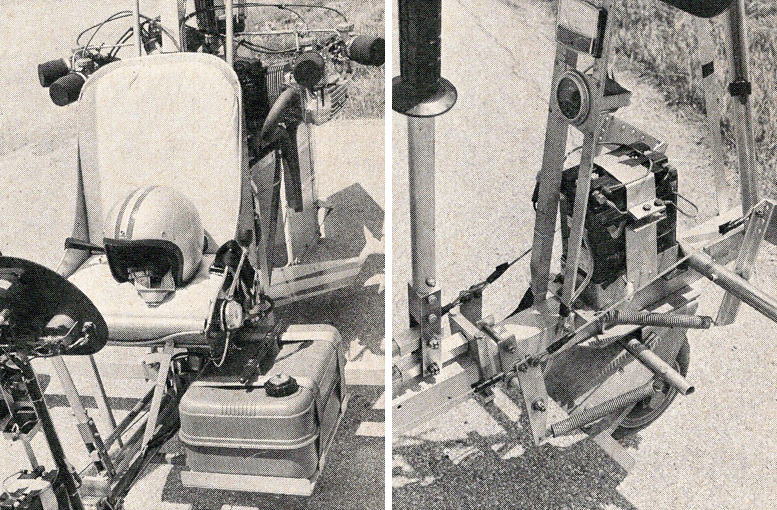 Basic aircraft gauges mount in the instrument panel. Hand throttle is seen at the pilot’s left. Control stick handles the pitch of the rotor blades in flight while foot pedals act on rudder. Aluminum tubing used in construction.

Gary lifted off, running the length of the grass strip about three feet off the ground. He landed alongside his instructor with a crab and a bounce, taxiing to the parking area to rest and a quick smoke! He was shaking all over.

Gary related to me again the importance of the proper training. Thanks to Willard Meyer he is one of the club’s instructors and says he learns more through the students’ mistakes and misunderstandings of the trainer than you do from your own. 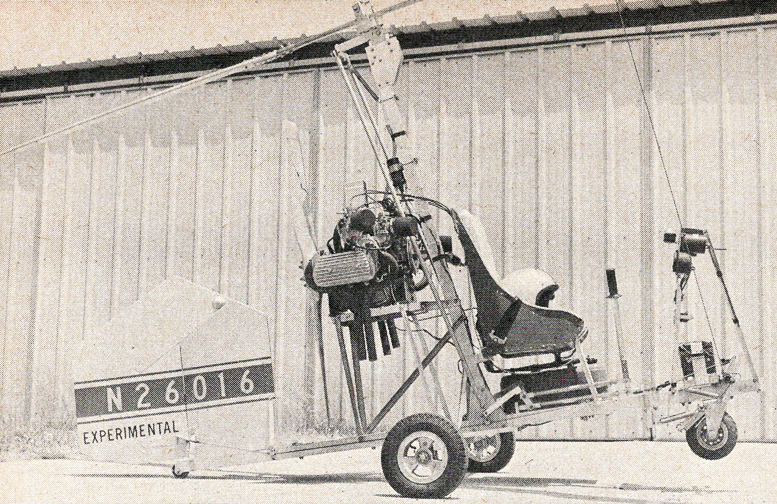 Overall height of the ship is 7 feet, length is 8 feet, empty weight is 390 pounds. Brake is fitted to the nose wheel.

Perhaps the reason is being re­sponsible for the student and yourself at the same time. This makes for better judgment and sharper reac­tion toward the gyrocopter trainer. But back to the first flight of Gary and his gyro at Creve Coeur Airport.

Taking an hour break was required before Gary got back up again. He spent the rest of the day practicing takeoffs and landings with no prob­lems. Much moral support, along with great instruction, really helped to get Gary off on the right track.

The next three weekends were spent in making emergency landings. This was most difficult for the Missouri pilot but, as he showed me the day the photos were made, he has this down to a fine art.

For instance at a recent fly-in he had an ignition wire break 30 feet over a runway and brought the ship down with ease. He credits all the training saved the machine and himself.

With a total of some 60 hours in the air now Gary has made several cross country flights in formation with other club members. Fly-ins are also very popular as the builders use these weekends to spread the good word about gyro flying. 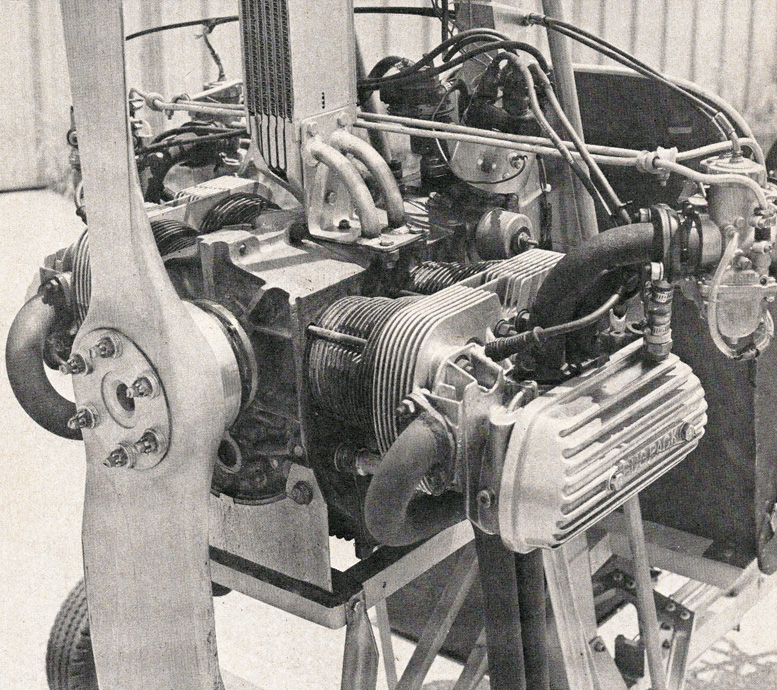 The 130 hp VW mill swings a 52×28″ Trdyer prop that gets the ship off in 250 feet. The quad Mikuni cycle carbs are shown in their unusual mounting on the 2180cc engine. The wood prop turns up to 3500 rpm. Note mounting of the oil cooler.

Gary spent a total of one year and $4,500 in the building of his aircraft. The first flight took place in July 1977. The structure of the ship is simple with 2″ x 2″ aluminum tubes used for the fuselage, plywood for the rudder and aluminum for the 25-foot rotor blade wing.

The controls on the Cotter craft are stock airplane type. Early models of this gyro used a control stick work­ing in reverse to that of a standard airplane. This resulted in accidents and deaths of pilots who had many hours in fixed-wing ships. 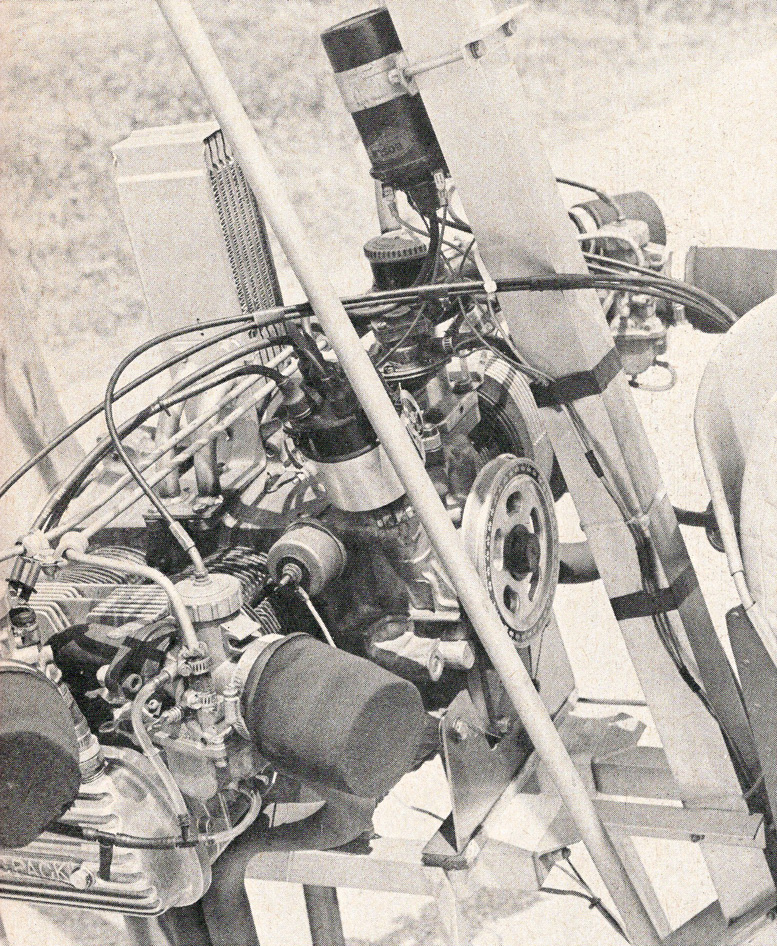 Note the air cleaners mounted on the cycle type carburetors.

The de­signers changed the controls to regular airplane stick type. As Gary Cot­ter explained to me the use of proper training does much in the prevention of accidents. The 610-pound ship gets off the strip in about 250 feet and climbs out at 2,000 fpm!

Cruise range is 150 miles with a 30-minute reserve. Serv­ice ceiling is 17,000 feet but Gary told me he has only been to 2,500 feet. Sitting out there in space that would appear to be high enough for me. I have flown in a Breezy and that was great sport.

Gary Cotter and other members of the St. Louis Rotocraft Club have done a great job in the promotion of this type of flying machine. It’s fun and safe. Just use your head and remember the instructions. 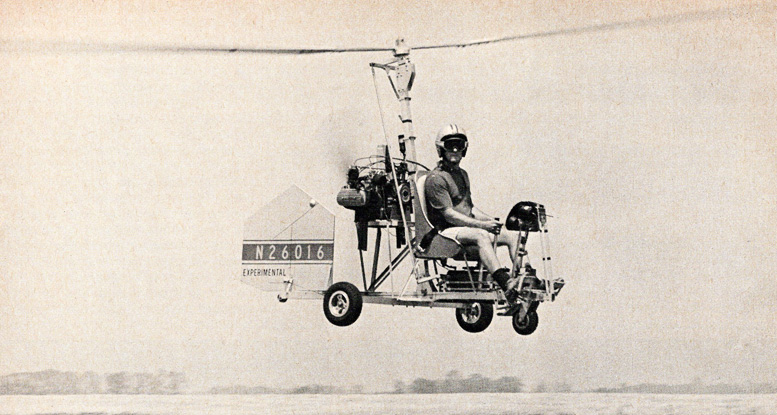 After one year’s flight time Gary Cotter handled his gyro like a veteran pilot. Top speed is 95 mph, will cruise at 65 mph. 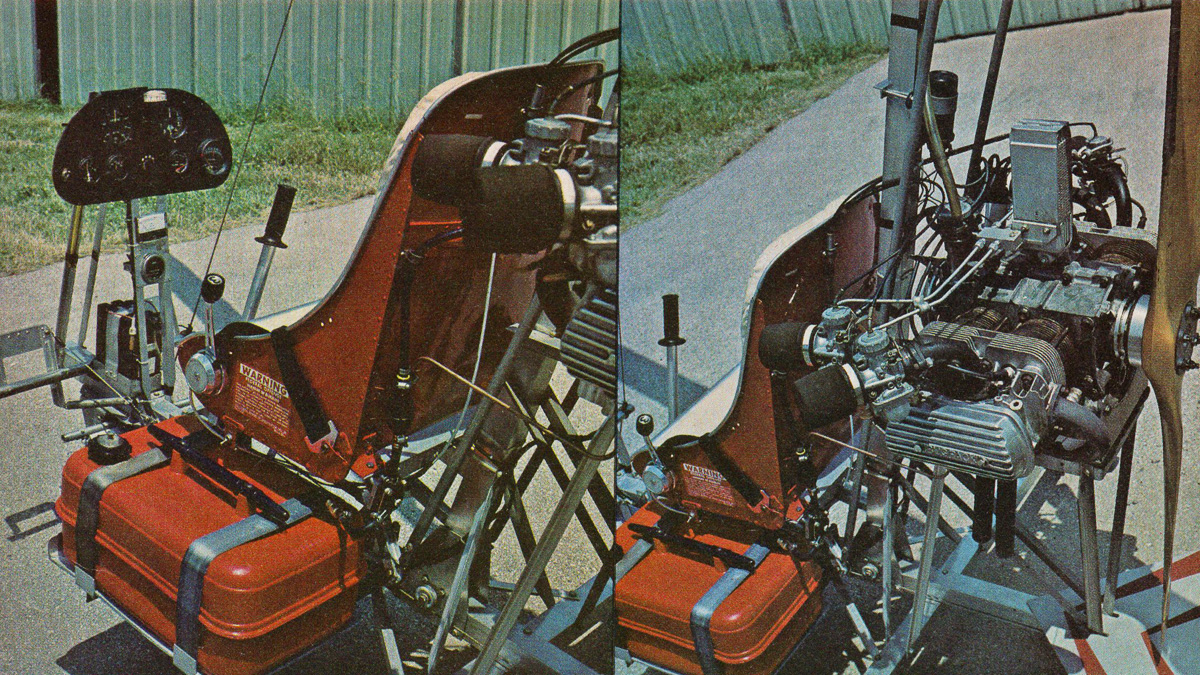 Be the first to comment on "Gary And The Gyrocopter"