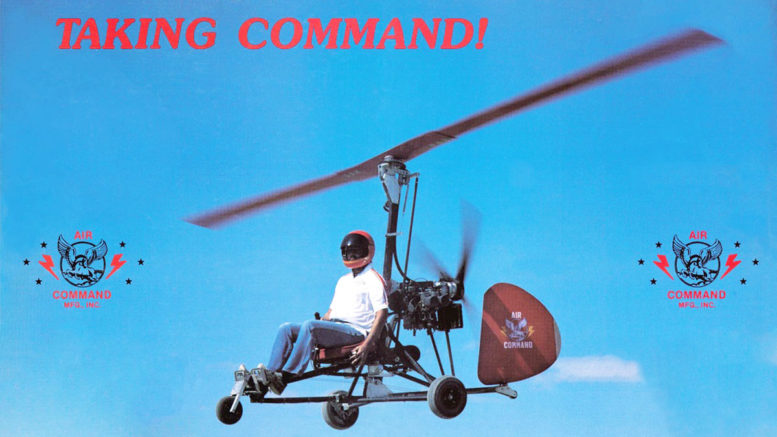 YOU ONLY LIVE ONCE

Proof Positive . . . Air Command Gyro Pilots Get All The Girls!

That’s right . . . you don’t have to be a secret agent to realize that the modern Air Command gyroplane has never been more affordable, maneuverable and exciting than it is today. 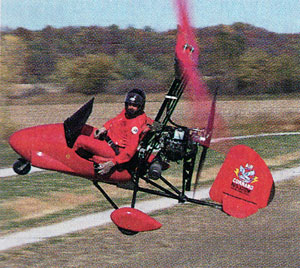 New Air Command Gyroplanes for 1989 include a wide selection of ultralight and amateur built single seat aircraft. This new generation of rotary wing flying machine can be flown at speeds ranging from ZERO to well over 100 mph depending upon your choice of engine and the many exciting new options available for the Commander.

“With the new two place conversion, the Commander can be used to teach you the fine points of gyro flight with greater safety and enjoyment than ever before . . . and then used to share the thrill of gyro flight with your favorite friend, family members . . . or fellow secret agent”.

Gyroplanes — fast, fun, exciting, thrilling, affordable. One of the best ways to enjoy sport flying in the 1980s.

But . . . don’t just take our word for it. Check us out!!! We have an extensive information pack available that can answer all your questions about owning, building and flying an Air Command Gyroplane.

Our new Air Command video is an enticing and comprehensive look at the exciting world of gyro flying — it’s fast paced, exciting, and sure to help you understand that Air Command gyroplanes are the most exciting birds flying in the sky! 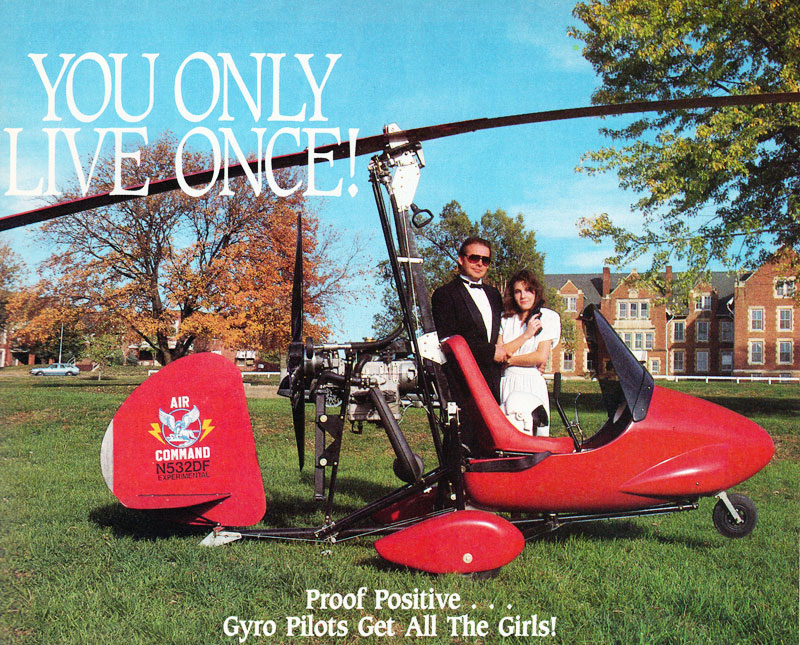 Tired of having to put your gyroplane away for six months a year or having to wait for warm weather to fly? A problem of fly­ing in less than desirable temperatures has been answered by Air Command. A partial enclosure is now available for Air Command’s series of gyroplanes. The enclosure has been designed for simple installation on the 447, 503, and 532 Commanders with no modification to the basic airframe.

Weighing just 10 lbs., the enclosure is constructed of premolded, laminated, com­posite fiberglass. It measures 63 inches long by 19 inches wide, with the windscreen set at an angle to deflect the airflow. The en­closure is aerodynamically designed to provide a smooth airflow and complement performance.

The add-on kit includes horizontal stabilizers that can be added to the Com­mander’s empannage in minutes. Addition­ al features include an optional instrument panel with full instruments available and matching wheel pants to complete the sleek, streamlined look. 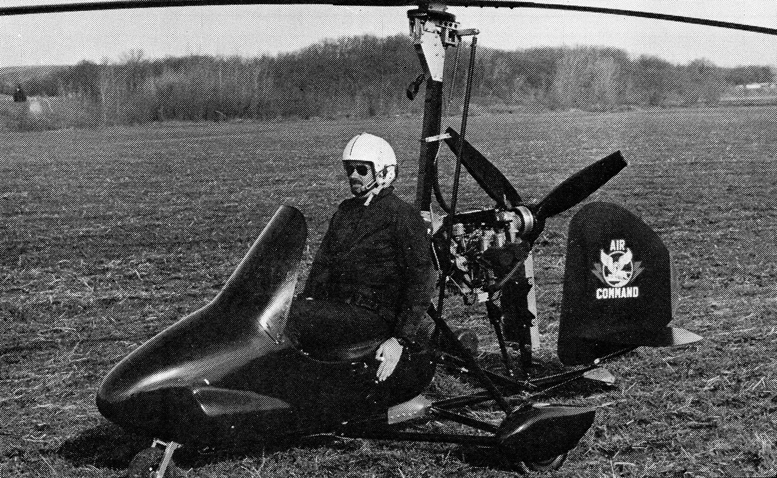 The enclosure, stabilizers, and wheel pants are gel-coated bright red, with a sharp black trim, to match Air Commander’s rotor blades. The kit will offer high visibility and a classy look in the air.

Also, since the enclosure makes flying your Commander gyroplane in all temperature conditions more comfortable, Air Commander is offering add-on extended range tanks. Designed and manufactured by Air Command, the tanks are bullet shaped, rotationally molded high-impact plastic with impregnated fibers for added strength and mount on the airframe under the pilot’s seat.

They are available with the enclosure or separately and by holding an extra seven gallons of fuel, they can more than double your range and increase airtime significantly. Air Command expects to have the en­closure and wheel pants in full production by March 1988. The extended range tanks are available now. 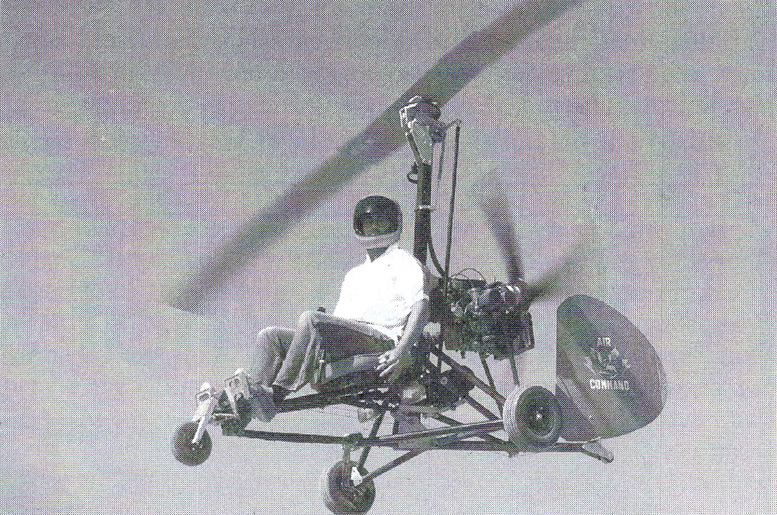 Not since Igor Bensen invented the original gyrocopter has an aircraft ignited the interest of so many potential rotornauts. The original ultralight Air Command 447 helped to re-popularize the sport rotorcraft movement and introduced hundreds of owners to the thrills of sport gyroplanes.

I should know. I was one of them. I owned and flew an Air Command gyro for the better part of several years and grew to really love that aircraft. Few aircraft are as innately rowdy and carefree as the gyroplane and the Air Command series certainly proved that again and again.

Coming in at a pretty light 242 pounds (without pre-rotator and other accessories), the AC 447 has no discernible stall speed, cruises right at 40-50 mph, with a top speed of about 60 mph, and can handle an amazing amount of wind. I know that for a fact; I’ve flown a 447-powered bird in well over 30 knots of “air conditioning”.

The 447 machine has more than sufficient power for most operations and the initial climb rate is 700 feet per minute… even with 200-pound pilots. A five-gallon fuel tank, built into the seat, keeps everything legal under Part 103.

Even the lightest, least expensive 447 version is a sweet, highly maneuverable machine in the hands of a pilot who knows how to motivate it. A sweet flyer, this entry level gyro comes highly recommended from those of us at USA. It’s a great bird.

This is one of the few truly legal, high performance ultralights available these days. Properly built, the Air Command 447 will tip the scales at about 242 pounds and offer you an amazing amount of fun and games.

Highly maneuverable, well-constructed and extremely rugged, the 447-powered bird performs far better than the small engine would have suggested at first glance. For true ultralight action, few aircraft can beat the Air Command 447. 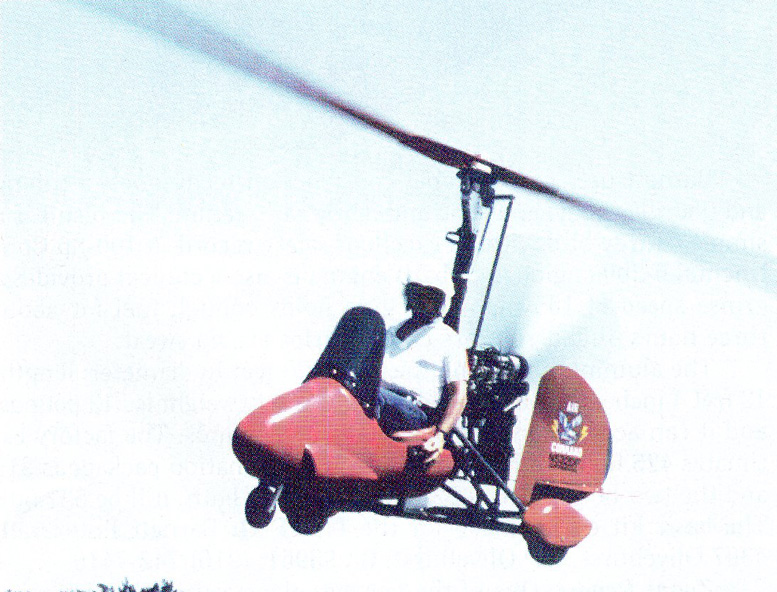 For those gyronauts with more aggressive interests, this is your steed! Powered by the 65 hp Rotax 582, the Air Command 582 is a rip-roaring hot-rod… with a rotor. A top speed in excess of 100 mph makes this one serious little motor-scooter.

A climb rate proves well over 1100 feet per minute and you can really load this critter down if you happen to be a weighty pilot (I’ve seen 300-pound pilots in this critter haul off the deck with gusto).

The liquid-cooled 582 offers dual ignition and additional safety and reliability under a number of arduous conditions for those who really fly their birds hard. I have owned a 582-powered Air Command single-seater, and found it to be one of the most thrilling gyros I’ve ever flown.

Most importantly, the stout construction and agile controllability make it a great machine for experienced gyroguiders while still retaining some of the excellent manners of the lighter, lesser-powered birds.

By the way, all of the Air Command gyros (as do most of the breed) offer hands-off stability that is impossible to find on other rotorcraft. The amazing stability of these aircraft makes for some very pleasant flying even under windy conditions.

The new staff at Air Command offers a number of new options for their gyros that include more engine choices than can be found on any other gyro as well as enclosures, instrument packages, pre-rotators, you name it.

These are the machines that made the gyroplane the most popular flying toy in sport aviation. With a few much requested changes coming for the new generation of Air Command gyros, the new owners have obviously made a serious commitment to serving their customers.

Outside of that, flying these birds is about as big a rush as I can recall. And I’ve owned several of these things. Highly recommended.

Be the first to comment on "Air Command Gyro Pilots Get All The Girls!"