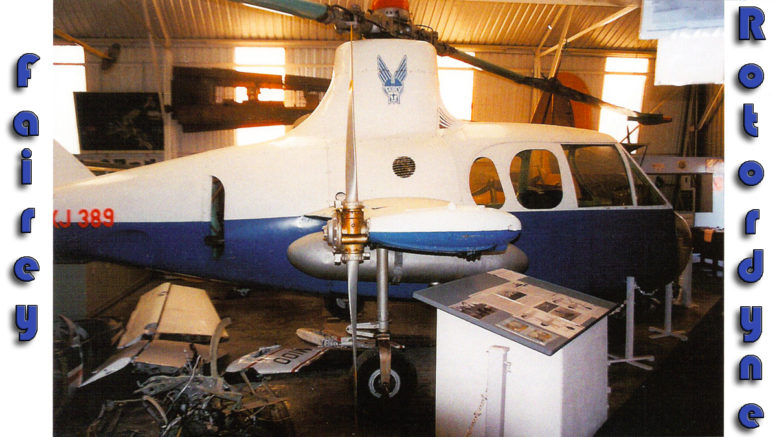 Following the untimely, tragic death of Juan De la Cierva in an airliner crash in 1932, Dr J.A.J. Bennett assumed control of the Cierva Autogyro Company, and alongside his task of ensuring the company’s continued operation, he devel­oped his own ideas for a ‘combi-plane’. The flying machine would have a lifting rotor and a stub wing, complete with an asymmetric propeller mounted on it, intended to counteract yaw and to provide thrust, this lessening the load on the rotor blades.

A compact and somewhat streamlined helicopter, the Gyrodyne – as it had been christened – behaved like a helicopter, but due to the asymmetric propeller providing the necessary thrust to propel the machine forward, the aircraft took on the appearance of an autogyro.

Dr Bennett took his concept to Fairey Aviation in 1945, where upon he was employed by that company. This resulted in concept devel­oping to reality. In April 1946, Fairey announced a private venture proj­ect for a rotary wing aircraft, and following the firming up of the design, the construction of a prototype began.

A UK government contract to specification E.4/46 was awarded for two prototypes, the first of which was exhibited in an advanced stage of construction at White Waltham, Berkshire, UK on December 7th 1946. 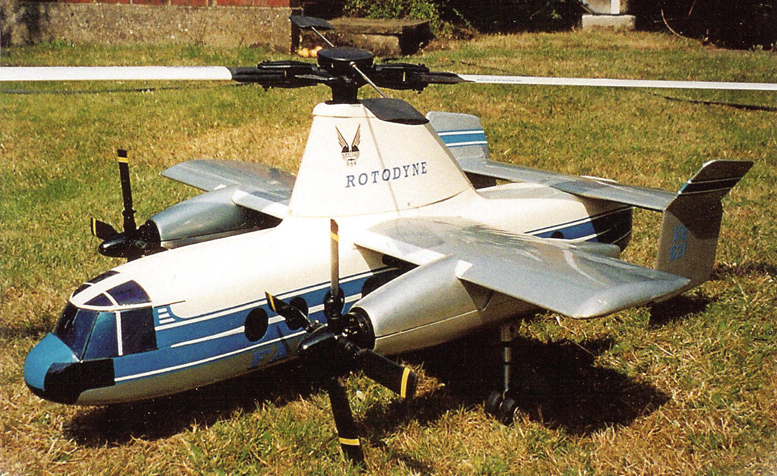 Model of the Fairey Rotodyne

Following completion, ground testing and minor modi­fications, the need for which – like all other prototype aircraft the world over before it – were highlighted during ground testing. The first of these prototypes took to the air for the first time on December 4th 1947 (though another, single source quotes 7th) at the company’s base at White Waltham airfield.

This aircraft subsequently built up flying hours until March 1948, when it became the subject of a routine ‘tear-down’ to allow a thorough examination of both airframe and engine plus systems in order to detect any major wear and tear experienced during flight-testing.

Fitted with a more comfortable interior to allow passenger demonstration flights, the second prototype was flying by the time of the next SBAC Farnborough Trade Show in September 1948. In the meantime, with the examinations now completed, the first prototype was re-assembled and returned to the flight test program, part of which was to attempt a new world’s helicopter record for speed in a straight line.

On June 28th 1948, flown by test pilot Basil Arkell, the machine completed two flights in each direction over a 3km course at White Waltham, when it achieved 200km/hr to secure the record. This was to have been followed in April 1949, on an attempt to secure the 100km closed-circuit record. However, two days before the planned attempt, a fatigue failure of the rotor head resulted in the crash of the Gyrodyne at Ufton, near Reading Berkshire, UK, killing the pilot F.H. Dixon and his observer.

It was only to be expected that the second machine was immediately grounded for investigations and due the subse­quent, intense examination, it was nearly four years later that a completely redesigned aircraft – intended to provide data for the approaching larger project, Fairey’s innovative Rotodyne was to re-appear. (See photo of model above).

This highly modified second prototype, now re-named ‘Jet Gyrodyne’, following tethered flights, free flew in January 1954. However, it was not until March 1955, that a full transition to hori­zontal flight was achieved. Although the word ‘Jet’ had been added to the aircraft’s name, it still retained it’s original Alvis Leonides pis­ton engine mounted in the middle of the fuselage, the ‘Jet’ referring to the two blade rotor’s tip jets.

The Leonides engine performed two functions, the first of which was to supply, via gearboxes, power to the two pusher propellers, one mounted on the outboard end of each of the aircraft’s stub wings. (See photo, below) The second purpose was to drive two superchargers (resourced from Rolls Royce Merlin engines) to provide air, that is piped up to the rotor head and out through the inside of the rotor blades to jets at their tips. Here the compressed air was mixed with fuel and burned to provide more power. 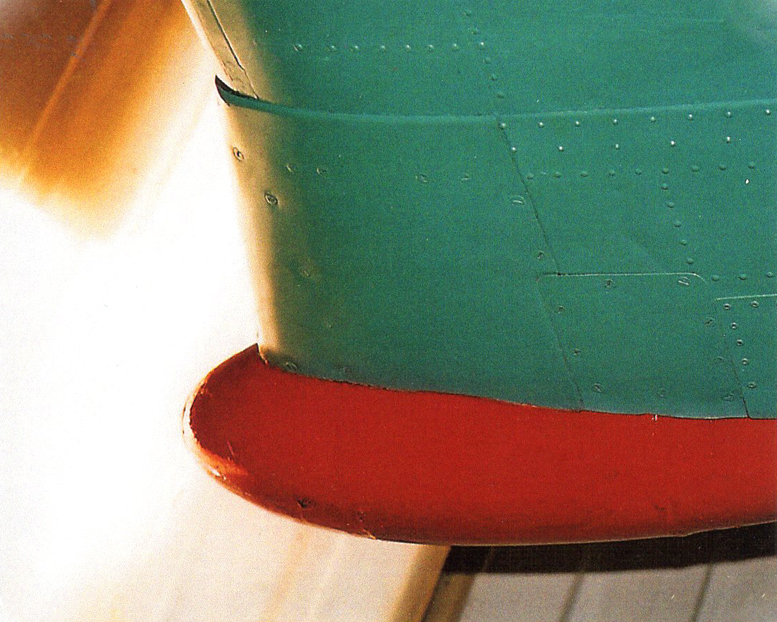 The Fairey Rotodyne “Jet Gyrodyne’s” jets. These were tip jets installed at the ends of the two main rotor blades.

The rotor tip jets were used for vertical take-off, land­ings and for transition to forward flight, whereby the stub wing, pusher props took over, unloading the rotor blades. These would auto rotate like an autogyro, still giving lift but not requiring power from the engine air/fuel mix to continue rotation. Due to the method of powering the rotor blades, there was none of the reaction torque, thus negating the need for a tail rotor.

The stub wings also provided support for the main gear of the tricycle undercarriage. System proving continued and by September 1956, 190 transitions and 140 autorotative landings had been completed. As was normal in those days, any aircraft that had been built to a UK Government contract specification had to be scrapped at the end of its projected testing. 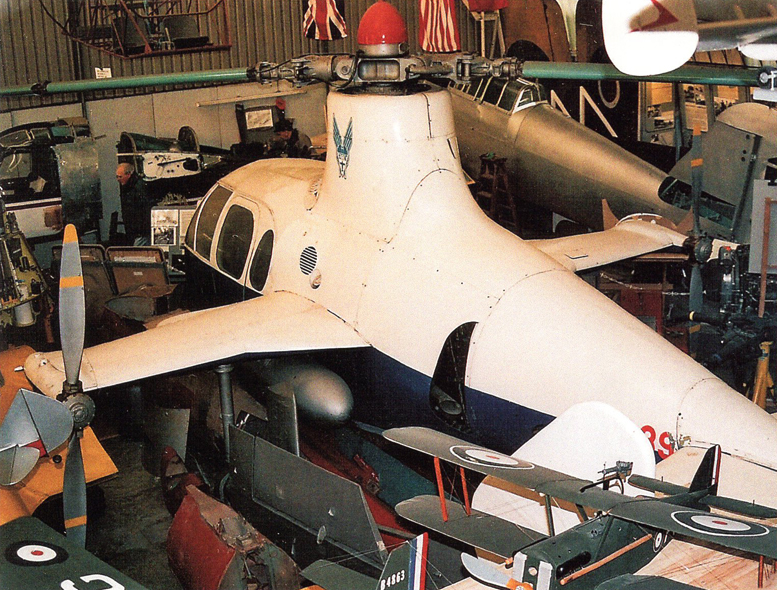 The Jets two pusher propellers, one mounted on the out­ board end of each of the aircraft’s stub wings and powered by the Leonides engine.

However, although scheduled for scrapping in 1961, the Jet Gyrodyne (XD759, later re-allocated change of serial to XJ389 – itself a conversion of G-AJJP) escaped the scrap man’s axe and found itself on display for many years, in the open, at the Air Training Corp’s Southampton Squadron’s city center base.

Today, the machine can be seen at the Museum of Berkshire Aviation, near Reading, Berkshire UK, where it is on loan from the Royal Air Force Museum collection. 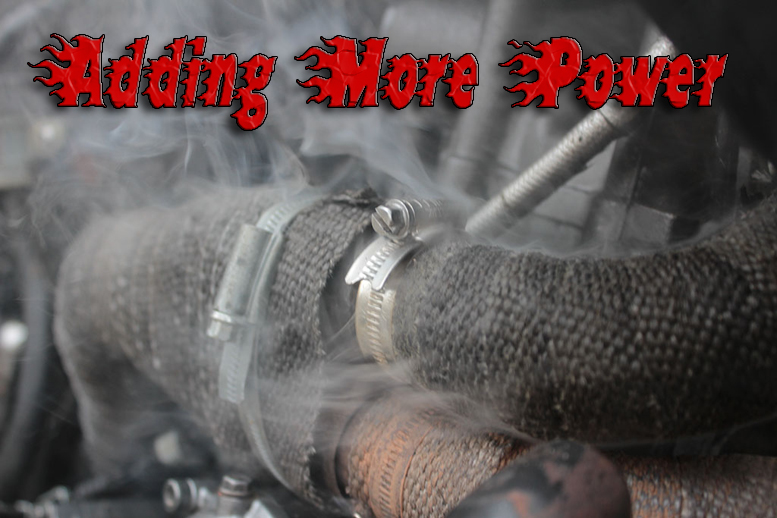 Why do people put heat barriers on their exhausts? One argument for the Ceramic coating is that they are prettier. Another is to keep the heat in the exhaust pipe. I wrapped mine to keep from burning my hands when working on a hot engine.

There is another argument, perhaps even more persuasive, and that is keeping the heat in the exhaust pipe maintains a higher velocity exhaust gas flow, thus providing better scavenging, which ultimately provides more power.

Burns Stainless (https://www.burnsstainless.com ), manufacturers of stain­ less exhaust, says that stainless steel exhaust conducts 219% less heat per foot than mild steel and therefore doesn’t need wrappings or ceramic coatings to help maintain the exhaust gas velocity. However, if you want to keep as much heat out of the engine compartment as possible — not a bad idea, then the ceramic coating or wrapping helps that area and undoubtedly helps, even if a small percent, the exhaust gas velocity.

Further, as a comparison, Bums lists the coefficient of thermal conductivity (a measure of how well heat is conducted through the exhaust pipe surface) for mild steel at Cf=27, 304 Stainless Cf=9.4, 321 Stainless, Cf=9.3 and finally, Inconel 625 Cf= 5.65.

For you people who made out on the real estate market before the balloon broke, Inconel exhaust is the way to fly. It is especially useful in rotary engine and turbocharger installations. It is stronger and therefore can yield a lighter installa­tion and while the need for a welder, educated at Harry Potter’s Hogwarts School of Magical Welding, is a bit of exaggeration, it wouldn’t hurt.

The downside is that Inconel tubing needs to be shipped in an armed guarded container. To say it is pricey is an understatement. However, low Cf means more power. Yea! Yea! More power, more power. 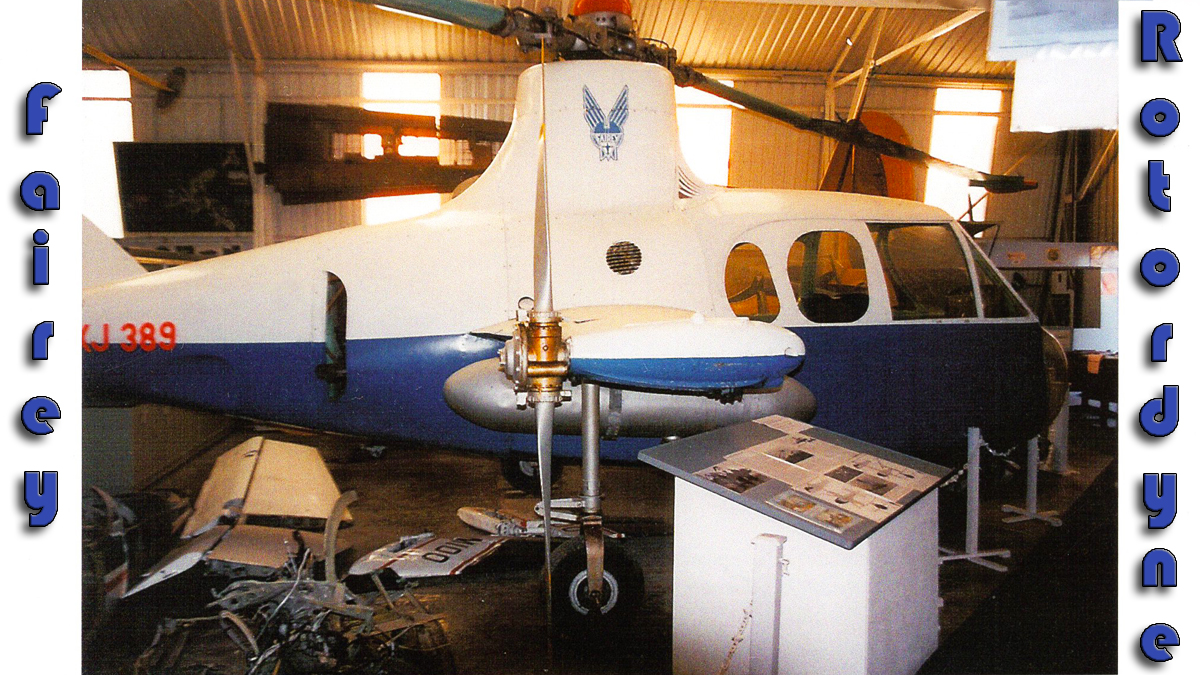 Article Name
Fairey Gyrodyne
Description
It's one of those names any gyrocopter or gyroplane enthusiast can immediately identify with. A company that has left it's permanent mark on rotorcraft and aviation in general - Fairey Gyrodyne.
Author
Ron Bartlett
SHARE TWEET PIN SHARE