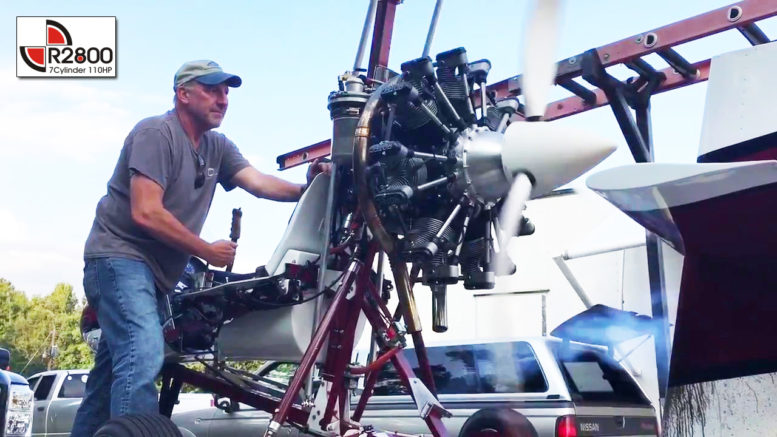 Brian Henneman had a lot of fun with the name of the little 110-hp, seven-cylinder Rotec Radial R2800 engine he was displaying at Sun ‘n Fun 2002. “R2800? That’s no Pratt & Whitney!” passersby would exclaim.

“That’s 2800 cc,” Brian would reply, and everyone would share a knowing smile. One of the sensations of Sun ‘n Fun, the Rotec Radial R2800 is a new lightplane engine manufactured in Melbourne, Australia, by Rotec Engineering Pty Ltd.

And judging by the response at Lakeland, the answer to the prayers of builders and would-be builders of scaled-down World War I and II fighters—and any homebuilt that bears even the slightest resemblance to a Monocoupe.

Two of the engines were on display at Sun ‘n Fun: one in the Henneman’s Custom Craft LLC booth and another mounted on a Kitfox on the homebuilt flight line. Every day at noon, Brian would run the engine on the Kitfox, and he drew a big crowd each time. (The airplane had been flown about 20 hours with the R2800, but it needed 40 to fly at Sun ‘n Fun.)

If you were an EAA member in the early 1980s, you may recall Brian Henneman and his award-winning KR-2. He and his wife, Debbie, flew it to Sun ‘n Fun ’82 from their home in Clarinda, Iowa, and took home several trophies.

They and the KR-2 were featured in the August 1982 issue of EAA Sport Aviation. Even before building the KR-2, Brian had started a half-scale Corsair, but eventually he put it aside for lack of a suitable engine.

He wanted a radial engine but simply could not find one of the right size, weight, and horsepower to fit the Corsair. He never gave up, however, and when the Internet came along, he began to periodically search “radial engine” sites. About a year and a half ago he hit pay dirt.

What he discovered was that two brothers in Australia, Paul and Matthew Chernikeeff, had designed and were manufacturing a small radial engine that was just what he had been seeking for the past 20 years.

As he would later learn on a trip to Australia to visit the Chernikeeffs, the project had originally come about as a result of the brothers’ involvement with RC models. Despairing of ever finding a suitable model airplane engine for their giant-scale Gee Bee racers, Paul built a little radial of his own in his garage workshop.

Eighteen inches in diameter, its major components were machined on a small West Bend lathe, but a lot of off-the-shelf parts, such as a carburetor off a chain saw engine, were utilized.

The engine proved to be so successful that homebuilders soon began urging the Chernikeeffs to build a larger radial for use on experimental aircraft—and eventually they did just that. They had some advantages going into the project. 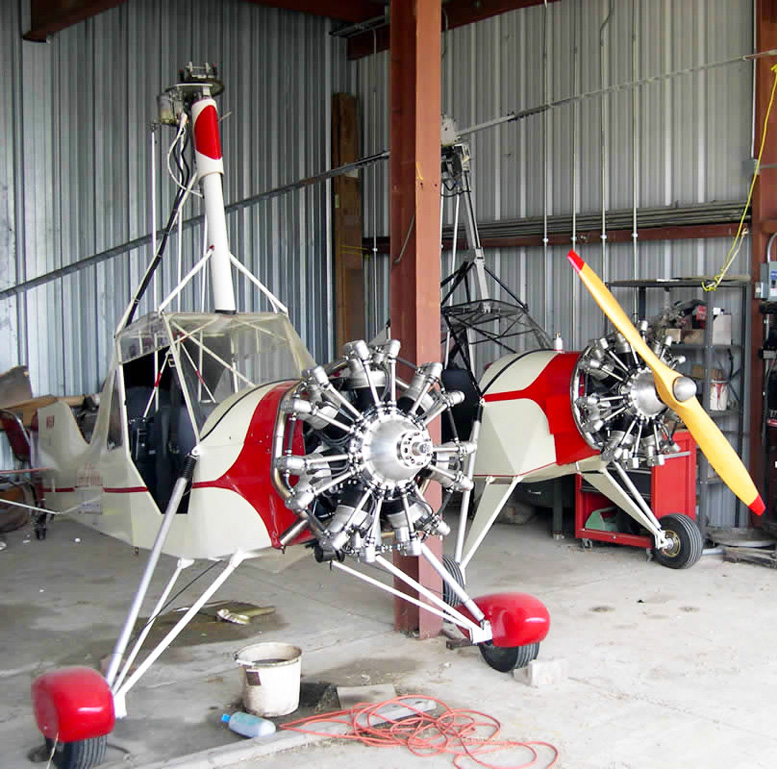 A Pratt & Whitney engine rebuild center was located nearby, allowing them to pick the brains of engineers there; they had a set of drawings for a Russian M-14 radial; they knew Bill Whitney, an expert on the type of planetary gear reduction units used on radials; and it didn’t hurt that they and their father operated a well-equipped machine shop!

The engine they proceeded to develop is a seven-cylinder, four-stroke, air-cooled Rotec Radial R2800 with a 3-to-2 planetary gearbox in the nosecase and an “air distributor” built in behind the cylinders.

The brothers don’t call it a supercharger because it operates at crankshaft speed, but it consists of a finned disc that “slings air out into the cylinders,” as Brian puts it. The engine is 32 inches in diameter, has a displacement of 2800 cc (170 cubic inches), a bore and stroke of 80 mm, and a dry weight of 220 pounds.

The compression ratio is 8.5 to 1, so 100 LL is recommended. Fuel consumption on the Rotec Radial R2800 averages 5 gallons per hour at 75 percent power. A dry sump engine, the R2800 has a remotely mounted 6-quart oil tank. In Brian’s Kitfox it’s located behind the firewall.

Testing to date, he says, shows the Aussies are right — it’s not needed. The Rotec Radial R2800 sports dual ignition standard, using a mag and an electronic ignition to fire the two NGK DCP8E plugs per cylinder.

The electronic ignition is an automotive unit, but Paul and Matt built the mag. It consists of a coil and rotating magnets from a Yamaha 100 cc go-cart-racing engine, and a triggering device is used instead of points and a condenser.

A 12-volt, geared automotive starter has been adapted for use on the Rotec Radial R2800, along with a 35-amp automotive alternator. An altitude compensating 40-mm Bing carburetor provides the fuel/air mixture for the engine.

Much of the engine is made in-house on the Chernikeeffs’ CNC equipment. The crankshaft is machined out of a large hunk of steel, the cylinders out of tubular steel, and the heads out of aluminum.

The Rotec Radial R2800 heads are screwed onto the cylinders like those on Lycoming engines, and then they are drilled for the valves, pushrods, and mounting bolts to ensure proper alignment. It’s an overhead valve system with two valves per cylinder.

At this point, the R2800s are custom built, and each one is put on a test stand and run through a couple of hours of programmed operation, ranging from idle to full rpm. Afterward, they are flushed out, crated, and those slated for the United States are shipped to Brian Henneman for distribution to customers.

The Rotec Radial R2800 was flown for the first time on December 1, 2000, on an Australian Slepcev Storch and subsequently underwent a comprehensive test flight program. For the U.S. market, Brian bought a completed Kitfox to serve as a demonstrator for the engine, in part because of its “round engine” firewall and cowling.

This is somewhat ironic, because years ago Dan Denney had that cowling, complete with fake bumps, made for use with another small radial engine called the Pong Dragon. The Pong did not become available, but Kitfox customers loved the looks of the cowling so much that they demanded it—even though they would be using little inline Rotax engines.

As can be seen in the accompanying photos, today it appears that the Kitfox was designed for the R2800. Brian is tremendously pleased with the operation and performance of the Rotec Radial R2800 he has in his Kitfox. 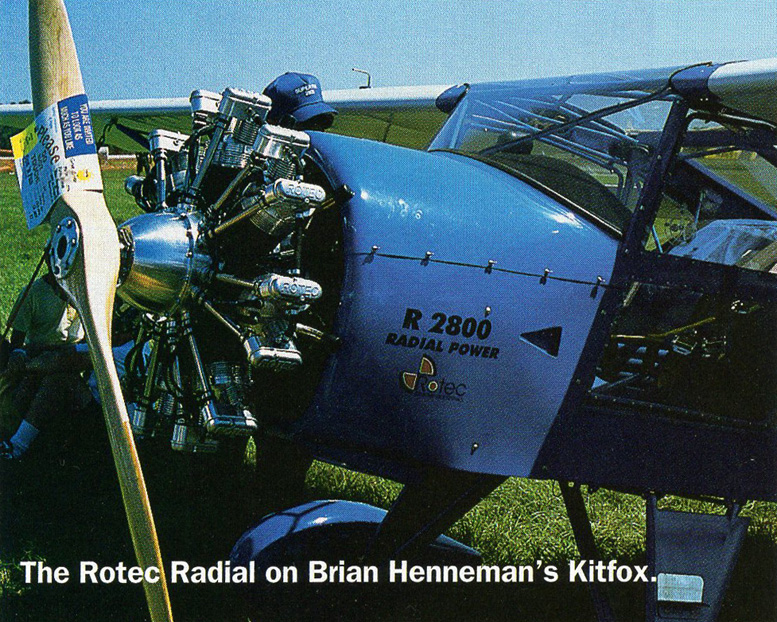 It starts like a modern auto engine, is very smooth throughout its operating range, reacts instantly to throttle changes—and sounds great! “It’s like any traditional radial” he says. “You have to pull it through before you start it because the oil will drain to the bottom cylinders, and you don’t want to hydraulic it.”

The starter chosen for the engine is purposely small enough that it can’t bend a rod, but you don’t want to push your luck. When you do crank it up, it’s just like the big boys—it smokes. It has to burn out the oil left in the lower cylinders, but that’s part of the fun of owning a radial. 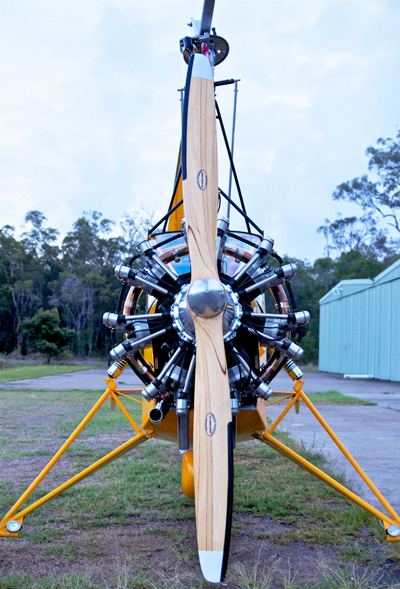 The Rotec Radial R2800 engine is really strong, Brian says. It is rated at 110 hp at 3500 engine rpm (remember, it’s a geared engine), and that figure was determined on a computerized dyno, turning a 24-inch cooling fan and with all accessories installed and in operation.

On the Kitfox, the engine is swinging a 76-by-45 prop built by Ed Sterba—and needs more pitch, Brian says. He hates to change it, however, because it hauls the Kitfox aloft at an exhilarating 1,800 to 1,900 fpm.

If you didn’t make it to Sun ‘n Fun this year, you can see the Rotec Radial R2800 at EAA AirVenture Oshkosh 2002. As the U.S. distributor for the engine, Brian’s Custom Craft LLC will have a booth in Exhibit Building D, and he hopes to have one or both of the Chernikeeff brothers on hand.

Brian certainly has the qualifications to handle the engine for them. He graduated from the U.S. Army mechanic schools for reciprocating and turbine engines and served a tour in Vietnam as a turbine helicopter mechanic.

Once back in civilian life, he went to work for a large ball bearing manufacturing company in Clarinda, Iowa, where he began building airplanes. He completed his KR-2 in 1981, a Nesmith Cougar in 1986, and a Glasair RG in 1989.

Along the way he has also owned a Sidewinder, a Grumman Yankee, and a Piper Colt that he converted to a taildragger. After winning so many awards for his homebuilts, Brian changed hats and has been a homebuilt judge at Oshkosh for the past 15 years.

In 1991 the Hennemans moved to Indiana where Brian is the plant manager at the NSK Precision America facility in Franklin. They subsequently bought a piece of property near Boggstown where they built a house, put in a 2,550-foot grass strip, and built a 3,800-square-foot hangar and shop.

He will conduct sales and service for the R2800 from that shop. An excellent website for the R2800 includes information on pricing, the various aircraft on which the engine is currently being installed, and much more.

Be the first to comment on "Rotec Radial R2800 Engine"