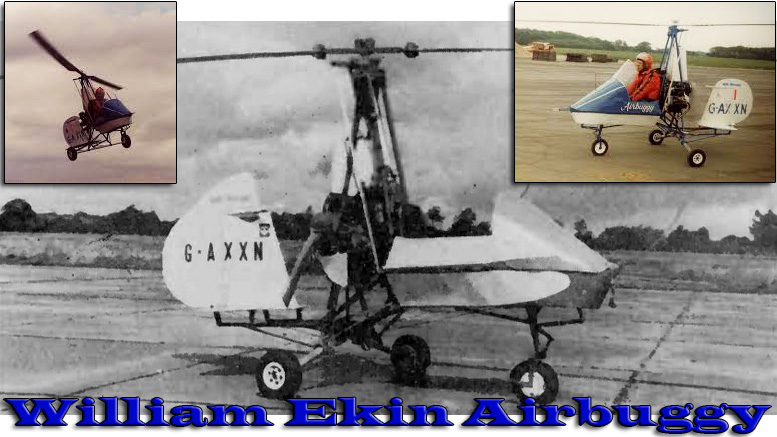 IN 1966, AFTER having flown my McCulloch powered Bensen B8-M for over 10 hours (in the powered configuration), while on the final approach at about 300 feet altitude, there occurred the most heart-rate altering and breath-taking cessation of noise that any pilot is likely to suffer — the engine had (simply and irrevocably) seized and the propeller came to a stop virtually instantaneously and certainly quicker than if the magneto had been switched off.

Below me were very small fields enclosed with earth banks, hedges and solid-looking wooden fences. Slightly ahead there was an abandoned road at right angles to my flight path which was being used as repository for a road contractor’s stones and rubble. Slightly ahead of that there was a new road parallel to the old one, naturally with new and an even more fearsome looking wooden fence.

The wind being dead ahead at least was in my favor. “Oh my-gawd”, flashed through my mind. “Keep your head EKIN, you’ll wreck the machine on the stones or fence, bruise yourself and maybe break a bone, but you should survive if you don’t loose your head.”

Fortunately, the lift/drag ratio of the Bensen was so low that it didn’t glide far at all and almost equally suddenly I found myself stopped dead on the ground in the upright position with rotor still whirling overhead about 2 machine lengths from the first wooden fence in what seemed a mere second or so after the sudden power failure.

No damage had been done to the machine and it all happened so quickly (probably 12 seconds from beginning to end) that I have some difficulty in believing it happened at all.

One thing for sure is that a light fixed wing aircraft in similar circumstances would certainly have been wrecked although the pilot would have survived. I suffered a second power failure in a McCandless Autogyro while climbing at full power and having reached about 100 feet.

Fortunately, the wind was again dead ahead and there was plenty of runway in front of me below, which goes to show the wisdom of taking off from the beginning of the runway even though one needs only a small fraction of it.

Because of the steep gliding angle and rapid rate of descent, I have always been aware in that in order to arrive one inch above the ground at zero rate of climb or descent, one has a very narrow time slot in which to execute a precision flare. 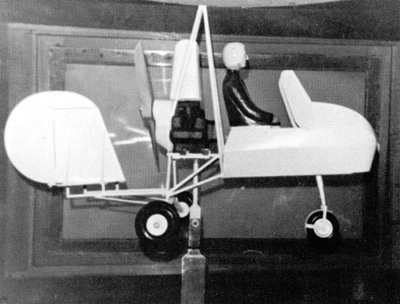 If one flares too high, a maneuver which swaps excess forward speed for reduction in rate of sink, one will find oneself lined up to make a dead drop to earth with negligible forward speed.

If one flares too low, one will thump the ground hard with an appreciable forward speed. I flared too late, wiped the nose wheel off (at least it provided 100% proof of the weld strengths as the tubes broke in tension!) and bounced about 1 foot.

Unfortunately, the rotor then touched the ground and the machine rolled over thereby wrecking the rotors and breaking off one blade of the propeller (at least that proves the propeller wasn’t rotating at the moment of impact).

While I had always felt that I should practice power off landings, the great risk of wrecking the machine during the learning process never permitted me to actually switch the engine off until Summer 1973, when I completed about 70 hours flying and so felt reasonably proficient.

At about 300 feet with the runway and wind ahead and with a tremendous effort of will, I closed the throttle and switched the magneto off. The machine lost height quickly as expected and yawed about 70° to the right, immediately causing great panic and regret.

Anyway, now irreversibly committed, I had to suppress the panic and concentrate on executing a precision flare with no sideslip. I landed well enough, but on the edge of the 150 ft. wide runway and at 70° to its centerline!

One thing I wasn’t mentally prepared for was the long time and great loss of height that occurred in the act of closing the throttle, switching off the magneto and waiting for the propeller to come to a full stop.

So it was possible that the engine hadn’t fully stopped until I was very close to the “bottom” and that I hadn’t left myself enough room to get the machine yawed straight again.

When deciding upon at what height to switch the engine off, I am afraid that my emotions which wanted a low height won over my intellect which wanted a great height so as to allow time to sort things out.

My first reaction was to immediately repeat the exercise because I thought that the yaw was probably caused by “innocent” reasons as listed below and that only practice was required.

Some possible innocent reasons were:

Then my second reaction was, “Ekin, this is the red light flashing — perhaps the autogyro is directionally unstable engine off. You’d be a right fool to ignore this warning, etc. etc.!”

So I went to the Aeronautical Department of Queens University, Belfast, who very kindly made a scale wind tunnel model. This quickly showed that the autogyro was not directionally stable engine off about the tunnel centerline but was stable at about 20% either side of the tunelline.

(If the gyroplane is stable, about the centerline, it meant that if you are flying straight ahead and a gust knocks you off to one side, then without you altering the rudder, the machine will straighten itself like a weathercock. If it is unstable, and if you do nothing, it will yaw worse and worse and may be disastrous if the instability is severe. However, it is permissible and even desirable sometimes to have mild instability providing the corrective controls are effective and the pilot’s reaction times are quicker than the time it takes for the instability to develop to disaster point.)

If one thinks of the rudder of our type of autogyro as a triangle, rotor clearance ground clearance and propeller clearance restrict the maximum area of the fin, and to get best value from the extra area one doesn’t want to shorten the arm from the fin/rudder’s center of pressure to the aircraft C.G. as would occur in moving the front edge of the fin forwards.

We found that to get engine-off directional-stability, it was necessary to mount additional fins on the tailplane tips away from the aircraft fore and aft centerline where it is blanketed by the engine and cockpit until it is yawed by about 20° in our case. 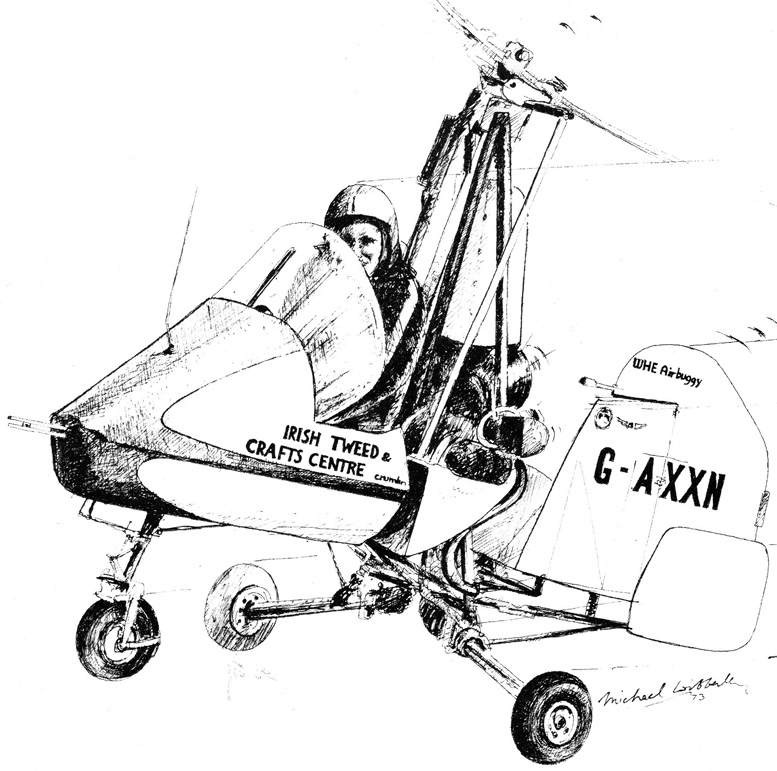 It is interesting to note that the Air and Space Model 18A, Victa, Campbell Cougar, McCulloch J2, Tervamaki and Cierva C30 all have fins placed on tailplane tips in clean air on either side of the aircraft’s centerline.

Its engine off rate of descent is more than mine (1800-1900 vw. 1400 fpm), gliding speed is similar (about 60 mph) but it can have “two bites at the cherry” in that it not only flares out at the bottom, but it applies a bit of collective pitch which we can’t.

CONCLUSION: It would appear to me those people who add cockpit (particularly those with a big side area, such as is required to cover the Bensen towing framework) to autogyros that were originally designed without cockpits, and who don’t check up on the engine off directional stability might be laying in store for themselves a nasty fright in the event of a genuine engine off landing. 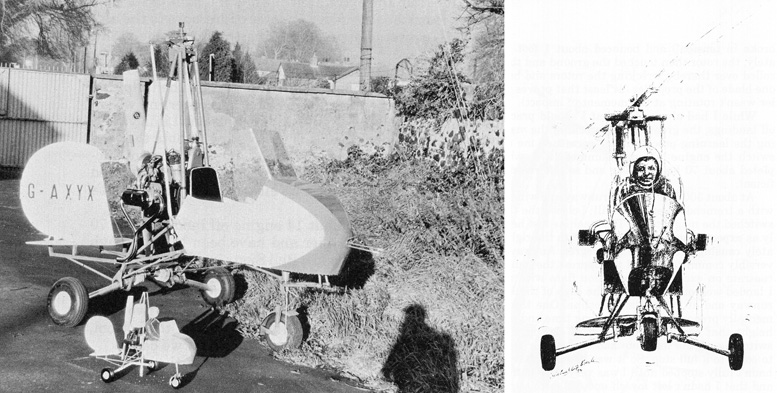 The author’s machine and the 1/4 scale model.

He started W. H. Ekin (Eng) Co. Ltd. in 1969 to develop and manufacture autogyros and in 1974 joined the Aeronautical Department of Queens University, Belfast as a Research Associate. Several W.H.E. “Airbuggy’s” are currently under construction.

Article Name
Directional Stability of Ultra-Light Autogyros
Description
Directional stability has been the key to safer flight in ultralight autogyros. The gyrocopter has had a colorful history with various advancements and realizations. One of those was the all important directional stability control.
Author
W. H. Ekin (EAA 65396)
SHARE TWEET PIN SHARE