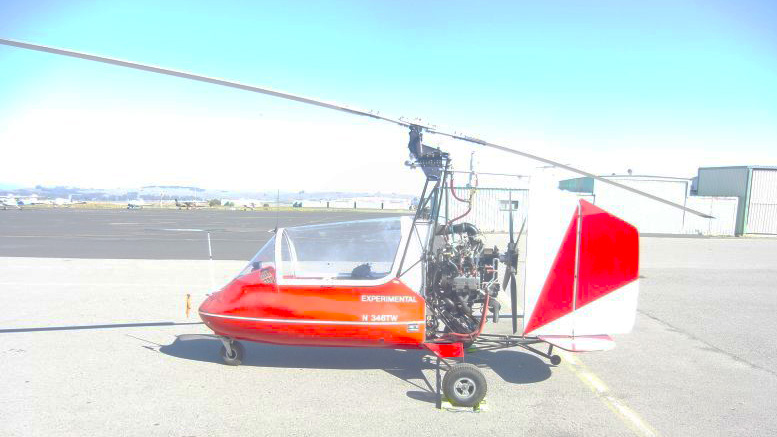 JERRIE BARNETT, an Olivehurst, California, machinist and self-taught gyro-pilot, has come up with a fine little single-place Barnett J4B gyroplane homebuilt for the do-it-yourself amateur with some knowledge and skill in acetylene welding. 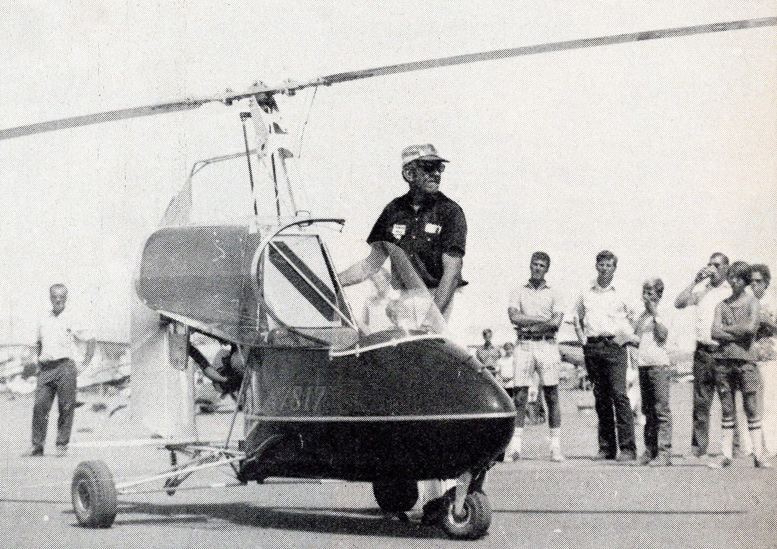 Engine running — Jerrie Barnett getting ready to climb in.

Requiring standard aircraft construction techniques and a minimum of technical equipment, the Barnett J-3M can be built for anywhere from $1,500 to $8,000, largely depending on the price of the engine selected.

It has flown with a 65-hp Continental, but Barnett says it was designed for 85 horses and can use other powerplants up to 100 hp, beyond which the engine weight becomes a limiting factor. 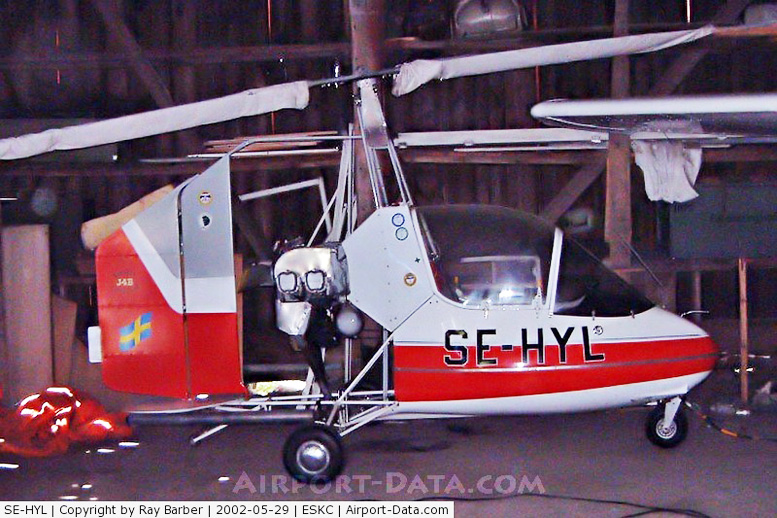 It was back in 1962 that Barnett first became interested in gyros, when he built up rotor blades and a control head from Bensen gyro-glider kits, installed them on a training trailer of his own design and manufacture, and proceeded to teach himself how to fly.

Mastering that, he developed an original rotary-wing glider, the J-1, and soon decided to add power for free flight. In 1963 Barnett converted a Volkswagen engine of 34 hp and installed it in the J-1. and mastered the fine art of piloting his gyroplane without the aid of a tow-rope. 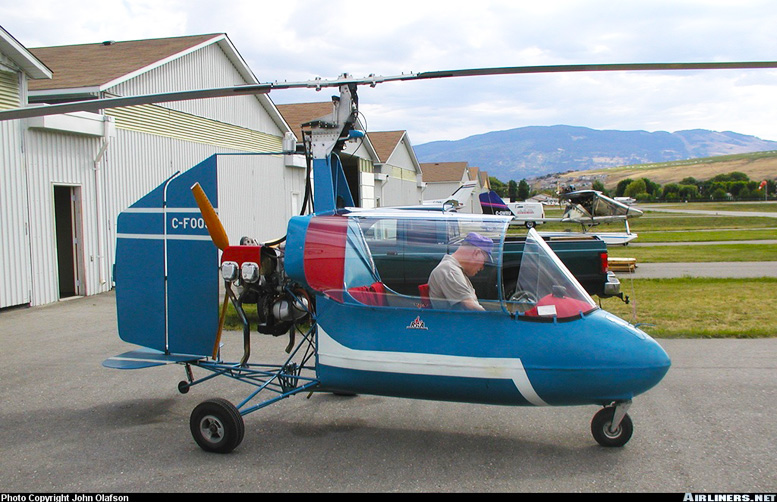 That engine served its purpose in the J-1 as a trainer, the J-2, and the following year Barnett graduated to the bigger J-3M gyroplane design, which could take a Continental aircraft engine of either 65 or 85 hp.

First flight-tested by CFI Tom DeKellis at Marysville, the J-3M gyroplane prototype has since logged several hundred trouble-free hours of flying and proved capable of climbing to a service ceiling of 6000 feet, on a power-to-weight ratio of 10:1, the J-3M weighing 650 pounds gross.

With the C-85 engine installed, says Barnett, the Barnett J4B gyroplane service ceiling has been increased by more than a factor of two, up to 14,000 feet MSL, and with a gross weight of 750 pounds, its power-to-weight ratio changed to 8.8:1. 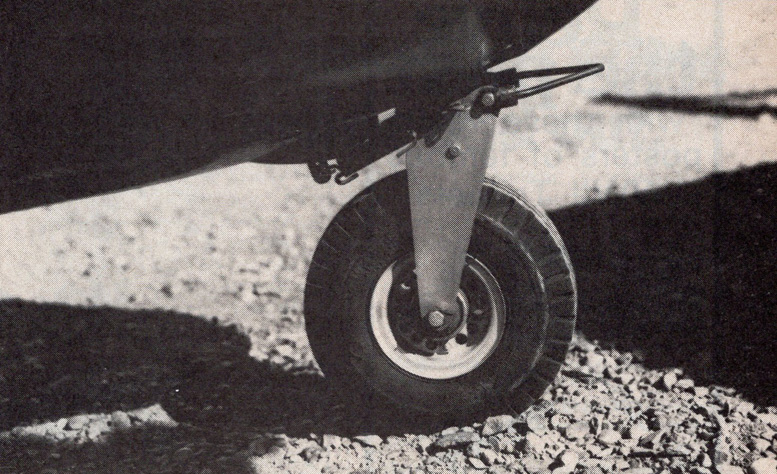 Called the Barnett J4B gyroplane with the bigger engine installed, its cruising speed has been increased from 70 mph to 90 mph, Vmax upped from 85 mph to 115 mph. and with 12 gallons of fuel instead of seven, its range has been stretched from 120 to 250 miles.

A homebuilder with basic welding skills can do all the required welding, or he can purchase a completely welded airframe for the J-B4, ready for painting, for $2,000. 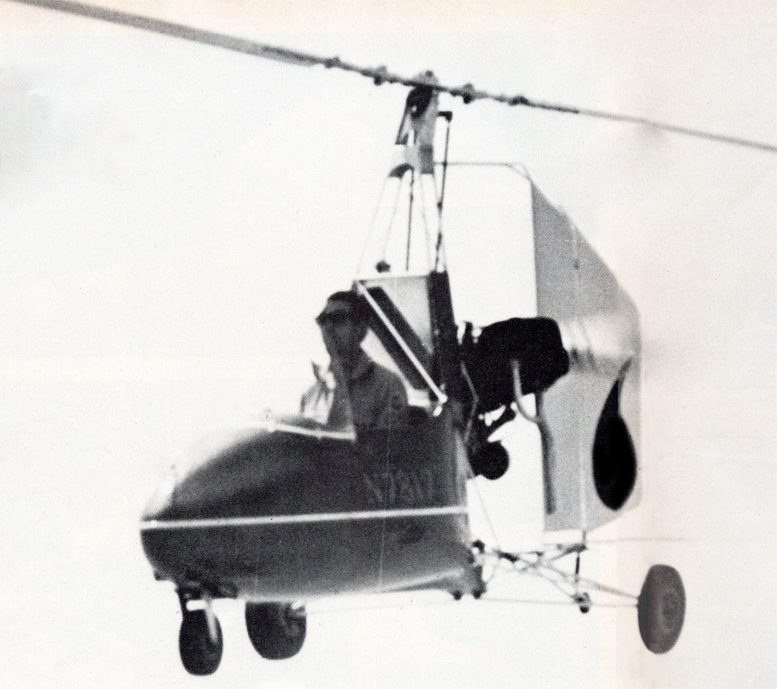 Only a small acetylene welding outfit is required to assemble the Barnett J4B gyroplane airframe from 4130 .035 aircraft tubing, and the only other tools required are a drill press and a 10-inch lathe, plus the usual shop hand tools.

With the exception of the curved nose section, which is made of fiberglass, all Barnett J4B gyroplane fuselage and empennage covering is of doped fabric, with plexiglass used for window panels.

The controls are standard fixed-wing aircraft type — a joystick and rudder pedals linked to a steerable nosewheel, and a brake pedal that operates equalized disc brakes, with throttle lever and a push-pull carburetor heat control. 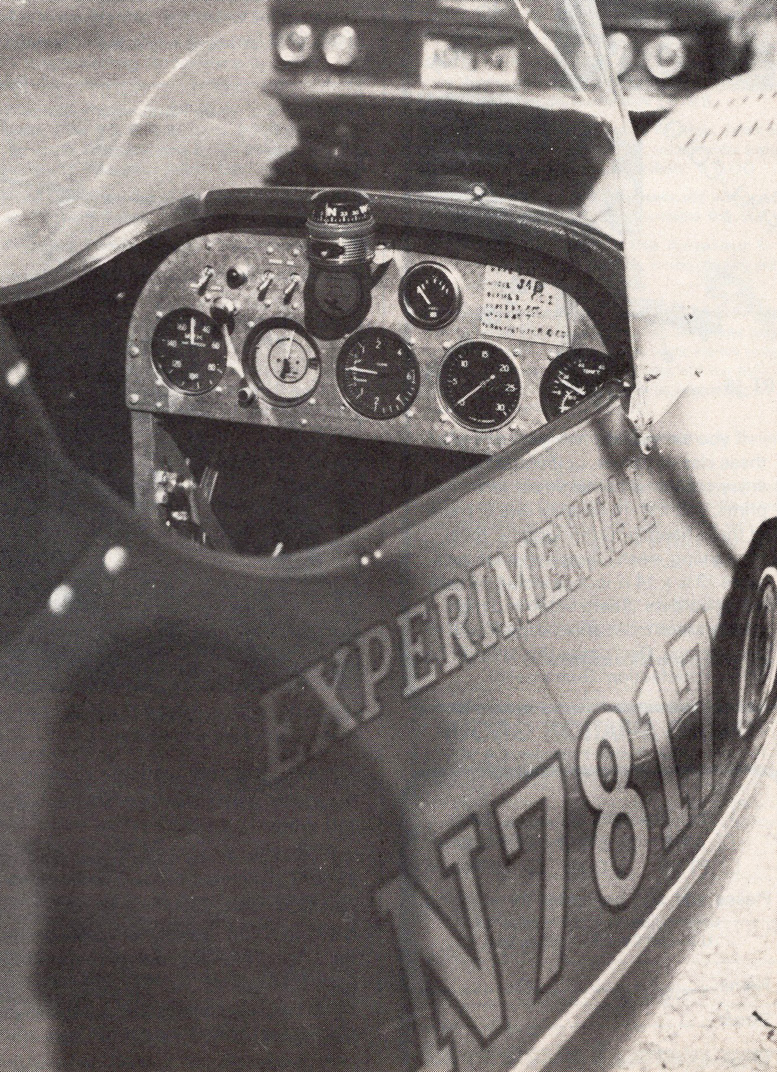 Instrument panel in J-4B cockpit with fuel selector valve at lower left. Body is made from high-heat resin.

Instruments include airspeed indicator, altimeter, a three-in-one oil-temperature/pressure and fuel gauge, engine and rotor tachometers, plus two on-off toggle ignition switches. The gas tank, fabricated of aluminum, is mounted under the pilot seat and uses a visual gauge from an outboard motor tank, plus a hand-operated squeeze-bulb for emergencies.

The J-3M has a tricycle landing gear with a small, solid rubber tailwheel to protect the rudder from damage during nose-high landings. The main gear is rigidly fixed to the airframe, and landing loads are absorbed by oversized, under-inflated tires. The mains have cable-actuated equalizing disc brakes which can be used together or independently as desired.

The J-3M has a gimbal head of Barnett’s own design, machined from aluminum alloy with a steel spindle turning in one bearing, with grease nipples provided for lubrication The spindle control head assembly is described by Barnett as a compact, high-strength design for long life and dependability.

Its single rotating bearing and large spindle. Barnett claims, make the design superior to others. The rotor hub and blade assembly Barnett designed also for servicability and long life. The hub is built in three sections with a built-in cone angle, each blade independently adjustable for pattern as well as pitch, he explains.

The blades are made from close-grained spruce with an internal steel spar for constant chordwise balance, covered with fiberglass for full flexibility and added strength and finished with epoxy. Streamlining of the blades is unmarred by extra weights or protrusions, other than faired-in trim tabs.

Barnett explains the difference between the J-3M and the Barnett J4B gyroplane this way:

“The J-3 is the utility model, rugged, dependable and easy to construct for the beginner, with an operating cost of around $2/hour. The J-3 is ideal for traveling to and from work, flying around the ranch, up to your favorite fishing hole or just cruising around. The J-4 is, on the other hand, the showoff, with its streamlined design, faster cruise and sleek look.”

However, Barnett doesn’t recommend the J-4M for beginners, as it requires a higher standard of workmanship and experience.

Gyroplane pilot ratings are available from the FAA, but are not required to fly one, says Barnett; you may fly with a fixed-wing student, private or commercial ticket, but beginning builders with no flight experience should get some dual instruction in conventional aircraft prior to flying the gyro. 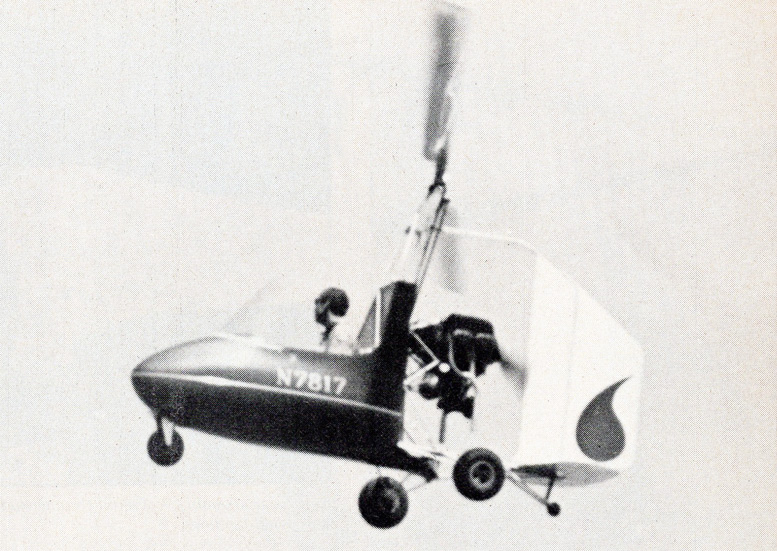 Climbing out, preparing for right-hand climbing turn. The J-4B will climb 3000 fpm with a 100-hp Continental.

A two-place design is under development, says Barnett, as well as a prerotator bolt-on unit to spin the blades up to takeoff rpm. Currently, an engine-driven torque converter and synchro-mesh clutch are used to pre-spin the rotor prior to takeoff.

The prerotator can only be engaged with the engine idling, and a spring-loaded lever in the cockpit is automatically released when the blades reach full prerotation speed of 240 rpm. Another new development is a set of 16-pound aluminum floats, and slightly heavier plastic floats, expected to be priced between $300 and $500.

Barnett describes the flight characteristics of the J-4M as “about the same as those of a small plane, except that there is much less bouncing in turbulence. Turns are coordinated with stick and rudder movement, with the stick controlling the angle and attitude of the blades fore and aft, and side to side. The horizontal stabilizer and elevator are one piece, mounted in a fixed position.” 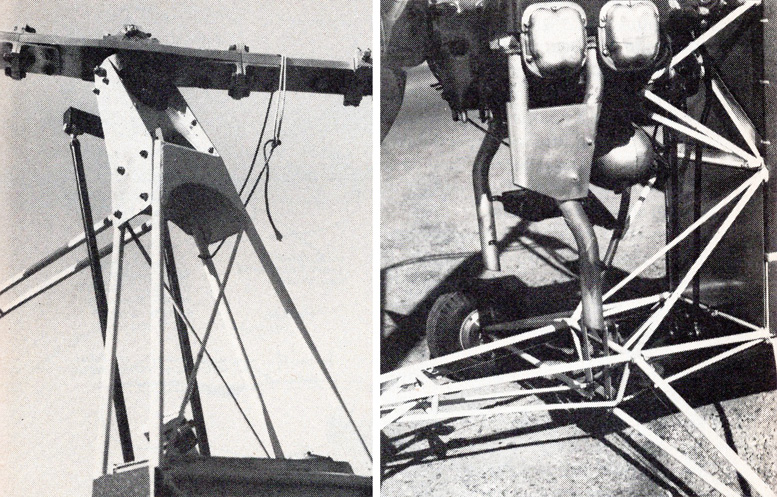 The J-4M is capable of slow flight down to 30 mph IAS, while its normal cruise is between 70 and 90 mph IAS. The C-85 burns 80/87 octane fuel at around 5!/a gph Says Barnett: “A normal takeoff on a non-wind day might take as much a s 50 to 75 feet with a the EAA, a freak occurrence on April reasonable headwind component.”

“If the engine quits, you can autorotate down to a safe landing almost anywhere, with a 5-to-10-foot rollout. It won’t stall or spin, but you must have room enough to take off again. The South Forty would be a great place to fly, if it were smooth enough to get off without shaking yourself and your gyrocopter to pieces!” 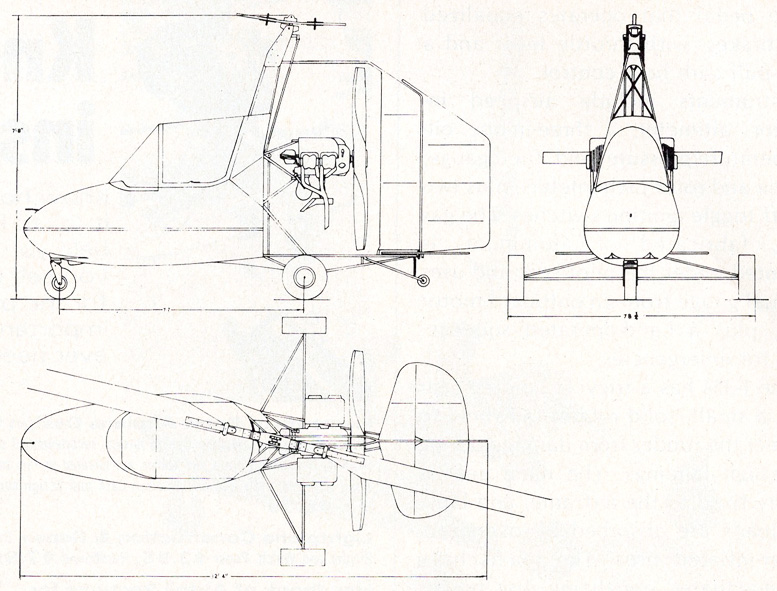 Barnett reports that more than 100 sets of plans have been sold and about 60 are flying. Only one accident to a Barnett gyroplane has been reported by 14, 1979 at El Mirage Dry Lake in Southern California. 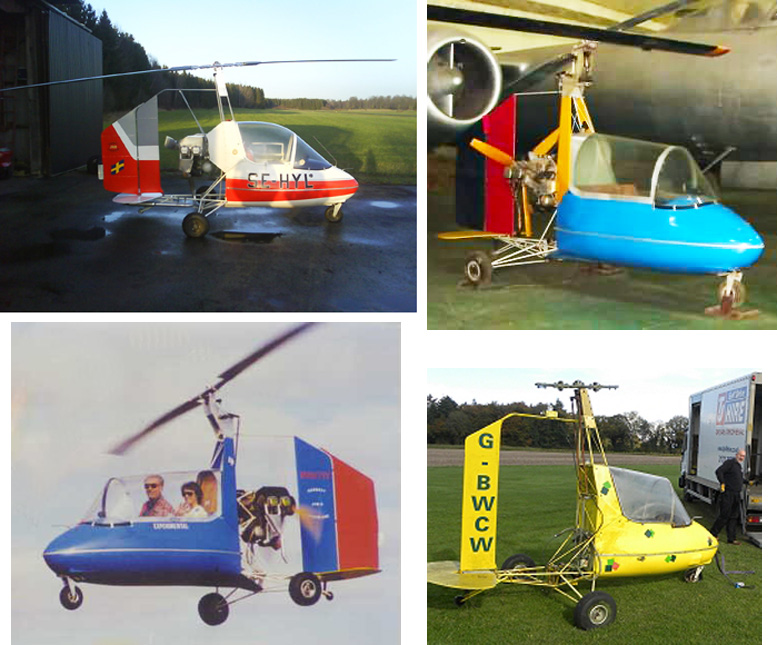 The Barnett J4B is a small gyroplane marketed in the United States by Barnett Rotorcraft for homebuilding. Originally flown as the J-3M with an open cockpit and fabric-covered sides, later versions have a fiberglass cockpit pod either partially or fully enclosing the pilot.

Apart from the basic J4B, versions available in 2007 included the BRC540 (two seats side-by-side) and J4B2 (two seats in tandem). A J4B2 piloted by Ron Merkle holds a coast-to-coast speed record in the United States for gyrocopters. 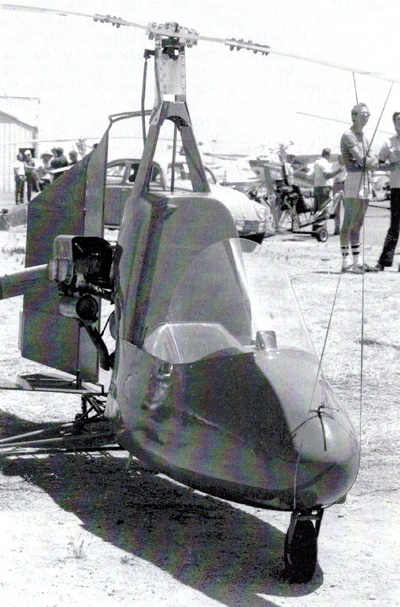 Barnett uses conventional construction techniques, a tubing and fiberglass body, and tube and fabric tail section. The result is a simple, sturdy bird with an excellent safety record.

A 100-hp Continental 0-200 engine (a Subaru engine is also a choice) provides a cruise speed of 105 mph. The Barnett J4B gyroplane gyro holds enough fuel for about three hours’ flight, so cross-country trips are no sweat.

The aluminum rotor on the J4B is 23 feet in diameter; length, 12 feet 4 inches: height. 7 feet 8 inches. Empty weight is 512 pounds, and it can accommodate a payload of 285 pounds. The factory estimates 425 hours of building time.

One of the few gyroplanes available with standard aircraft powerplants. Jerry Barnett has taken a very conventional approach to gyro design.