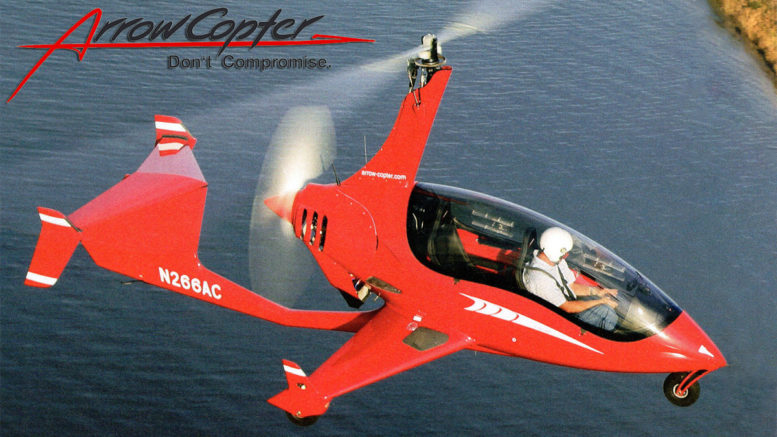 One pilot’s quest for performance leads to a gyrocopter

GYROCOPTERS AND THE PROMISE of efficient, economical vertical flight first captivated my imagination in 1996 when I heard Jay Carter, founder of CarterCopters, give a NASA-sponsored presentation. 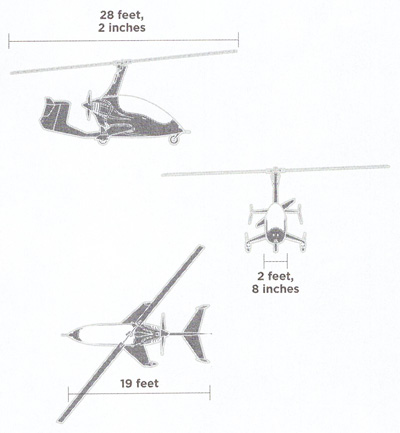 I’m a fixed-wing pilot, and I built, own, and fly an AirCam — a twin-engine STOL airplane with virtually unlimited visibility made for flying low and slow. But a modern gyrocopter – such as the ArrowCopterpromised even greater performance in those areas.

After years of watching gyrocopter technology mature, I finally took the step of learning to fly gyrocopters that incorporate some of the latest aeronautical design, materials, and construction techniques.

I met ArrowCopter designer Dietmar Fuchs in 2011 and was so intrigued that I soon found myself making arrangements to travel to the factory in Austria with my two grown sons to build one and bring it home. Like other European designs, the ArrowCopter is made from carbon-fiber materials and produced by a company that has its roots in Formula One auto racing.

It’s gorgeous as well as functional, with landing gear that act as an airfoil and provide lift in flight. Ours would be the first of its kind to fly in the United States. But before building it, I had to become qualified to fly it.

That meant traveling all over the country for professional gyrocopter flight instruction in a wide variety of aircraft that included the Air and Space 18A, a 1960s gyro that originally was certified in the Standard category. Altogether, I flew with nine instructors in seven types of gyroplanes, culminating in a commercial gyroplane rating from Ron Menzie in Searcy, Arkansas.

While gyrocopters combine near-vertical landing capabilities of a helicopter with performance attributes of an airplane, rotorcraft cruise speeds are limited by an imbalance in lift between the advancing and retreating blades.

Carter Aviation Technologies, formerly known as CarterCopters, set out to break the u-1 barrier, where airspeed equals rotor tip speed relative to the aircraft.

Led by founder Jay Carter, who inspired the author to delve into the world of gyrocopters, the company broke that barrier by slowing the rotor of its prototype.

Carter Aviation hopes to scale up its slowed-rotor technology, which minimizes rotor drag, and create rotorcraft that achieve airplane-like cruise speeds and efficiency.

Gyrocopters are a tiny niche of general aviation in the United States, but they’re wildly popular in Europe, where more than a half-dozen manufacturers push to advance the state of the art.

The best of them adhere to the highest aviation construction standards. They typically use carbon fiber extensively, and parts are made in autoclaves with embedded radio-frequency identification (RFID) chips to certify the proper cure cycles.

In Austria, regulators require aircraft with a maximum gross weight of 1,230 pounds to show that they can sustain a 7,500-pound load in the fuselage while being lifted by the teeter bolt (the center point of the rotor head assembly).

In the United States, gyrocopters available on the market today are limited to the Experimental/amateur-built category, so we couldn’t import an FAA-certified factory-built aircraft. Instead, my sons Eric and Carl — both teachers who get summers off — and I spent five gloriously busy weeks in Austria building our aircraft under factory supervision.

Then, we disassembled N266AC; boxed up the parts; and sent it home to Maryland, where we reassembled it and obtained an Experimental airworthiness certificate. Test pilot Soren Pedersen helped with the initial flights and taught fellow gyrocopter pilot Desmon Butts and me to fly it.

CALIFORNIA TO FLORIDA TO CALIFORNIA IN THREE DAYS BY GYROCOPTER 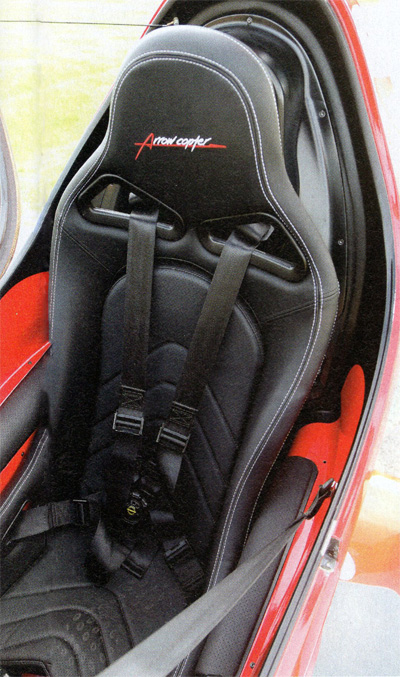 A RACE-CAR-STYLE SEAT isn’t a coincidence. The Austrian manufacturer of the ArrowCopter also makes components for Formula One race cars.

Going from California to Florida and back in three days by gyrocopter has netted Missouri physician Paul Salmon a handful of gyroplane records now pending before the National Aeronautic Association and Federation Aeronautique Internationale. The flights took place in late August.

The previous record, set in 2003, was 19 days. Salmon, also a helicopter and gyroplane instructor and Robinson Helicopter Co. dealer in Cape Girardeau, Missouri, flew at speeds between 49 and 59 knots true airspeed.

He and a partner own Cape Copters at Cape Girardeau Regional Airport. For 90 percent of the round-trip, he had tailwinds of 10 to 20 knots both ways, as though the weather system was willing to reverse itself in less than 72 hours to help him out.

He used an Italian-built Magni M-22 Voyager from Magni Gyro, powered by a turbocharged Rotax 914 engine, for the attempt. The route started and ended at Torrance, California, where Robinson is located, and its mid-point was Jacksonville, Florida.

He used Robinson’s computers to complete filing for the record. Salmon’s experience as an emergency room physician who gets little sleep served him well. He slept only a few hours at a time, except once when weather gave him a six-hour delay.

The ArrowCopter has much in common with fixed-wing STOL aircraft — but there are some key differences. A gyrocopter’s lift comes from an unpowered rotor overhead. The engine, attached to a smaller pusher propeller, provides the thrust; that forward motion spins the rotor.

In flight, gyrocopters can perform vertical descents and tight turns that go far beyond anything a fixed-wing aircraft can do. Here’s how a typical flight in the ArrowCopter begins.

LEFT: The Rotax engine is both liquid- and air-cooled (top left).
RIGHT: The pilot can adjust pitch trim, use the radio, and pre-rotate the rotor using switches on the hand grip (bottom left).

Steering is with toe brakes and differential braking; the nose wheel is free castering. Once in position for takeoff, hold the brakes, hold the stick forward, and push a button on the stick to engage the pre-rotator.

This pneumatic control tightens the pre-rotator belt to connect the rotor to the Rotax 912 iS engine, and this starts the pre-rotation. Slowly increase engine power to 4,000 rpm as the rotor accelerates to 200 rpm.

Release the button to disconnect the engine from the rotor, pull back on the stick, and apply full power. As you accelerate down the runway, look for 60 mph and 340 rotor rpm. Climb out at 60 mph. Cruise speed is 99 mph; never-exceed speed is 120 mph.

During the takeoff roll, climb, cruise, approach, and landing, the controls are similar to those of a fixed-wing aircraft. There is no collective, because the rotor pitch is fixed.

The aircraft hangs from a single teeter bolt, so control inputs take time to change aircraft attitude—wait for the effects of an input to take hold before adding more. Power changes require rudder input to maintain coordinated flight.

Turns require subtle rudder inputs to counteract the effect of the engine torque and the propeller’s gyroscopic forces. An easy task. In maneuvering flight, the big differences in flight profile become apparent. The ArrowCopter cannot stall. The familiar fixed-wing accelerated stall is not possible, no matter how hard you turn. 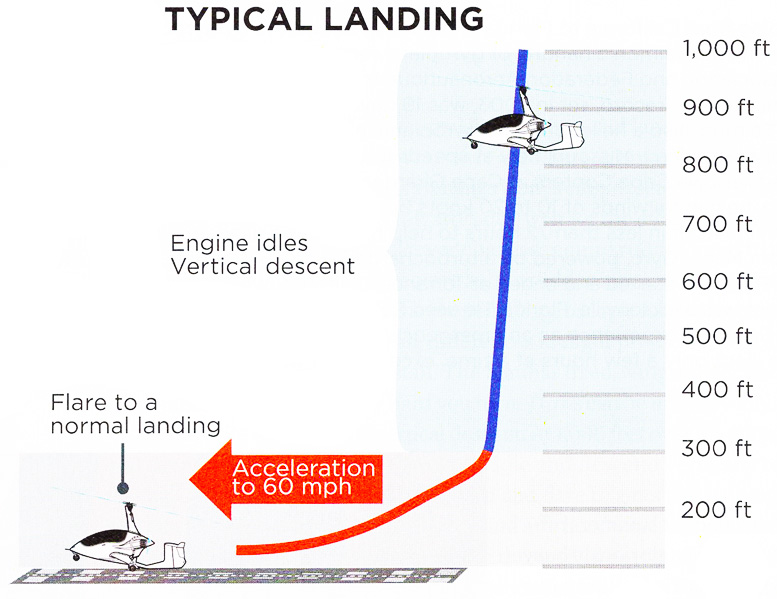 Turns can be unbelievably tight My favorite feature is the vertical descent. At 1,000 feet over the approach – end numbers, pull the engine power to idle and descend vertically to 300 feet AGL. Nose over gently to gain 60 mph and flare to a normal landing.

You will stop 500 feet beyond the numbers, and any headwind will dramatically shorten that distance. This is well within the normal operating envelope. Wind does not present the same limitations as it does on light fixed-wing aircraft. Gyrocopters can land directly into high winds without difficulty.

Landing is very similar to that of a fixed-wing STOL aircraft. The approach speed is 60 mph. Adjust the descent rate with power. Align the aircraft with the runway—but for a different reason. 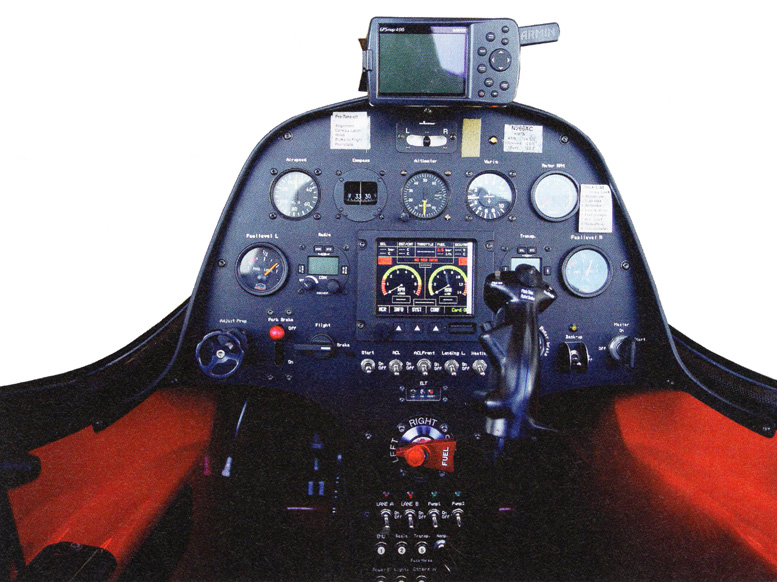 An engine monitor keeps close tabs on the health of the Rotax engine in flight. Exceptional visibility is a hallmark of modern gyrocopters.

A light fixed-wing aircraft may touch down at 40 mph; the gyro touches down at about 5 mph, but with a spinning rotor overhead. Neither likes sideways motion on touchdown. The ArrowCopter’s eight-foot wheelbase is more forgiving than most, but it is still important to line up properly and avoid side loads.

In severe winds, gyrocopter pilots can land into the wind on a taxi way or a grassy infield. Some of my best landings have been into winds of 30 knots or more. Check the descent at 10 feet and flare to land. The ArrowCopter touches down between zero and 5 mph.

The landing is not complete until the rotor stops, however. After touch-down, wait until the rotor slows below 200 rpm and sheds its lift. Then, engage the rotor brake and taxi with the stick full forward. All gyrocopter landings are autorotation landings. This is not the high-skill emergency maneuver that it is in helicopters.

During an emergency engine-out, no split-second action is required to lower the collective. Maneuver to arrive at the flare point at 60 mph and perform a normal landing. Most gyrocopters can land in a very small area, but they still need about 500 feet of runway for takeoff on a standard, no-wind day. 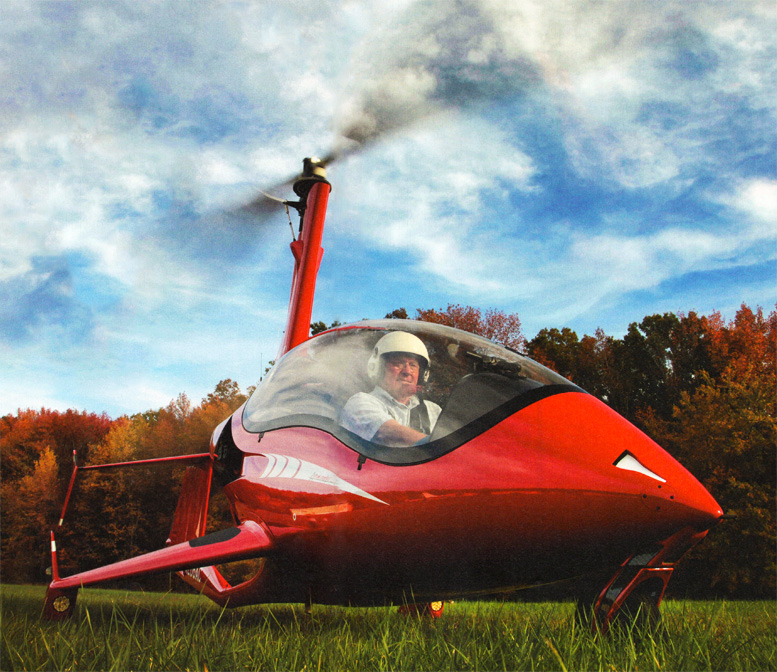 Gyrocopters have long held the promise of combining fixed-wing speed, mechanical simplicity, and safety with helicopter-like vertical takeoffs and landings. For a variety of reasons dating back more than 70 years, they have never realized their full potential.

With the focused and ongoing efforts of European businesses, however, gyrocopters may soon gain broad market acceptance in the United States – just as they’ve already taken hold across the Atlantic.

History of the Gyroplane – part 21 The Arrowcopter AC20

CLAUDIUS KLIMT is a retired physician and commercial pilot with gyroplane and fixed-wing single- and multiengine ratings.

Anatomy Of A New Gyrocopter Design