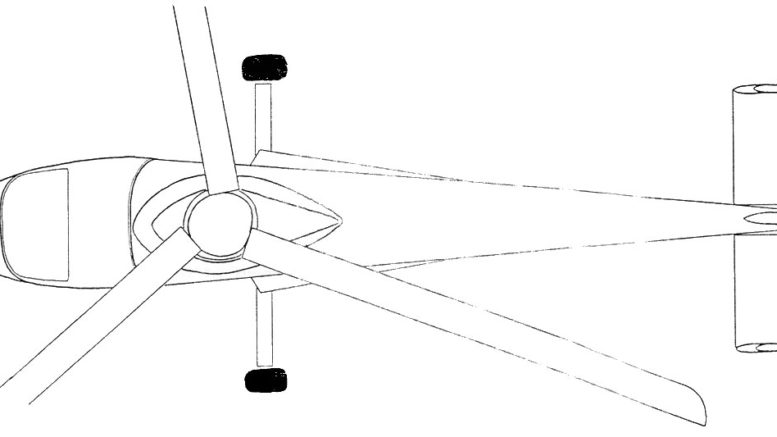 Jim McCutchen and Kurt Shaw have been involved in the gyroplane manufacturing business for several years.

They developed the McCutchen Skywheels composite rotor blades several years ago which have become the industry standard for gyroplanes. In fact, Skywheels rotors became the standard rotor blades for Air Command gyroplanes, one of the most popular ships around.

We kept waiting for a two place version of the Hurricane, but McCutchen and Shaw have taken a quantum leap and are again pushing the state-of-the-art in gyroplanes with the development of the WindRyder Cyclone V-300, an all-composite (of course), two place tractor design with vertical takeoff and landing capabilities and a top speed of 150-170 Mph. The Cyclone has several unique features which includes a three – blade rotor system with an elastomeric hub that contains no hinges or pivoting joints if any kind.

The WindRyder Cyclone V-300 rotor head is all-composite and utilizes Kevlar members which can flex to accommodate lead-lag and blade pitch. We made a brief visit to Windryder late last year and got a look at the rotor head which was in its early stages of development.

I asked if the fuselage was under construction and McCutchen said. “No, that’s the easy part. We will build the fuselage after we have developed a successful rotor system.” They did have preliminary drawings of the airframe, but dimensions and profile has changed considerably from those original sketches.

The WindRyder Cyclone V-300 three-blade, 36 foot composite rotor system will utilize a full collective to allow vertical takeoff and landing. The Kevlar hub members are hell-for-stout, but they can be twisted several degrees to vary the pitch of the blades.

With the collective control system helicopter style, zero roll landings can be made, and with the capability of leaping into the air the Cyclone will almost have the performance of a full-blown helicopter.

The tractor configuration is another deviation from the norm for the typical recreational gyroplane, although the WindRyder Cyclone V-300 will probably be targeted for more than just recreational use.

Jim McCutchen told me several times that he believed that there would be a big market for the gyroplane for patrol and surveillance use. The fuselage of the Hurricane is long and slender – 31 feet long to be exact.

And construction is steel tube and carbon fiber which will probably produce one of the lightest weight airframes around. A conventional fixed wing type rudder is used along with end plates on the eight foot horizontal stabilizer.

With a moment arm of around 20 feet the tail feathers should provide excellent pitch and yaw stability. In fact, the tail section extends beyond the tips of the rotor blades, so there would never be a possibility of a rotor blade striking the ground.

The WindRyder Cyclone V-300 is the second new design to utilize a long tail section that extends beyond the rotor tips. In post we aired a brief article on the Night Hawk which is a tandem two place pusher with the lone, slender tail feathers. 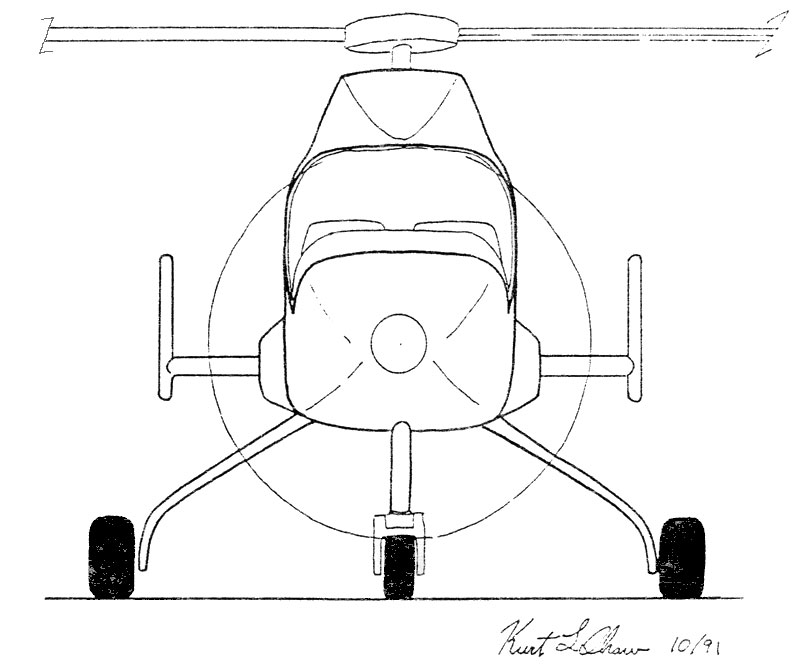 The engine and propeller drive train is still another take-off from the norm. The fuel injected, turbo-charged Chevy V6 engine is installed behind the mast and powers the 80 inch propeller through a long driveshaft and reduction unit.

I jokingly accused Jim of stealing one of my ideas – I had thought of a similar configuration a couple of years ago which consisted of a rear mounted Ford Windsor V6 with a drive shaft to a cog belt reduction drive on the nose. This configuration would solve several problems one encounters in a multi-place ship.

I had envisioned a three to four place configuration with the pilot in front and two or three passengers sitting abreast, directly under the rotor head, so there would not be any CG problems with changes in passenger load. The WindRyder Cyclone V-300 utilizes side-by-side seating with the drive shaft running between pilot and passenger in a tunnel similar to the drive shaft configuration in an automobile.

According to Kurt Shaw the 4.3 Liter Chevy engine is presently undergoing dynomometer tests to establish a base line horsepower rating after which the induction system will be optimized for maximum performance. The rotor system is well along in the development stage. Shaw said, “It’s a little more than we would like, in the development department, but we are getting it.”

On the following page is a three view of the WindRyder Cyclone V-300 along with estimated specifications and performance . We look forward to hearing of the first flight of this unique design. 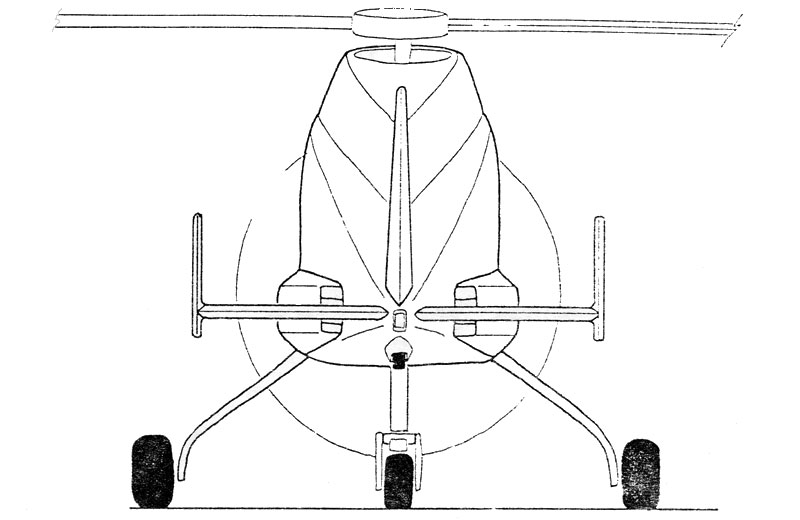 Be the first to comment on "WindRyder Cyclone V-300 Gyrocopter"