To a student pilot, the solo is the high point in his flight training – and is usually taken early before learning the safety formula required for safe and competent flight. The CFIs signature on his student pilot certificate and the endorsement in his logbook certify that he has satisfied certain federal aviation regulations and has demonstrated the required level of flight proficiency to fly alone.

To solo, is indeed, a noteworthy achievement, hut in the proper perspective, the solo should he viewed as only one step up the ladder of aviation education. There is much more to becoming a competent pilot than having the ability to get the gyroplane off the ground, around the traffic pattern and back on terra firma in one piece.

It seems though, that once the proficiency to fly alone has been attained, many gyro pilots are content to let their aviation education end. Consequently, they never begin to tap that vast reservoir of knowledge which would contribute immeasurably to their overall flying safety. The more knowledgeable he is, the better he will be. The more he practices, the more professional his flying will be.

Becoming an expert pilot is an evolutionary process involving quality flight instruction, self study, and diligent practice resulting in a overall individual safety formula. Add a generous helping of self discipline to the list of ingredients and in lime a safe competent pilot will emerge. Assume the new pilot has soloed and has accumulated some time in his machine, a good place to begin advancing his knowledge would be with a thorough understanding of his gyroplane.

For example, he should well understand airspeed, especially the best glide speed for his machine. In an engine out situation, most gyroplanes have the glide ratio of a greased brick, therefore, practicing simulate power off landings will greatly enhance the likelihood of a safe landing should the pilot ever have to do one for real.

While practicing emergencies, the pilot will learn the proper pitch attitude required to maintain airspeed in the descent. He will also realize the necessity for self discipline in maintaining that attitude.

The pilot who has never spent time preparing himself for that very fast, short ride down will be at a distinct disadvantage should he ever experience that would silence in flight, and chances are, he will make his approach too shallow, resulting in insufficient airspeed to make a landing, which in turn, will result in a bent machine, or worse. Besides making his flying much safer, practicing simulated power off landings are fun. 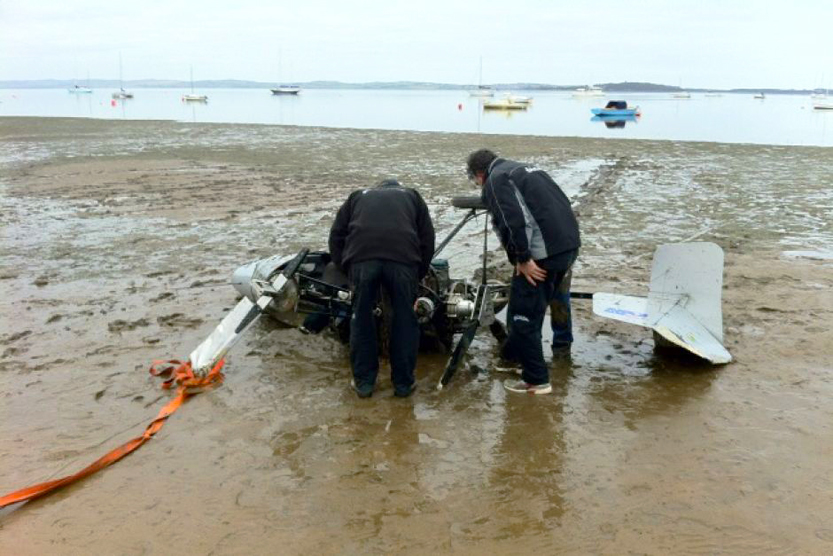 One of the best gyro pilots I know always makes his final approach from pattern altitude with the throttle closed. If his engine ever takes a vacation, it will be just another landing to him. Of course, making a safe landing depends, in part, on where the landing occurs.

If the pilot prefers not to have to land on whatever he is flying over, then good practice dictates flying at an altitude which would allow a glide to a more favorable landing site – remember the brick, and how it glides! Altitude buys the pilot time – time to pick a spot. Additionally, altitude puts the pilot above hazardous power lines, which are difficult if not impossible to see in time to avoid.

There was a gyro pilot who enjoyed cruising at tree top level until the day he rounded a bend in the river and met a power line at eye level. His snap decision to fly under the wire resulted in him flying into the river and a subsequent three week stay in the hospital.

Gyros are considered by some folks to be an aircraft in which one can fly low and slow in perfect safety – don’t you believe it! Fly low and slow, and safety is compromised. The new pilot should know the fuel consumption of his gyro. It’s embarrassing as well as illegal to run out of fuel.

The FAA has a regulation which says that you shall have a certain reserve of fuel (expressed in flight time) remaining when you reach your destination. Violation of this regulation could result in various types of disciplinary action against the pilot by the FAA.

A pilot of our acquaintance enjoyed making cross country trips in his gyro, each time stretching his fuel supply to the max. One day the inevitable happened. He had just returned from a trip and as he began his descent from 1000 feet altitude, the engine quit from fuel exhaustion. He was over the runway at the time and had practiced for just such an eventuality, so his landing was a safe one. Luckily for him, no official eyes were around to witness his arrival.

Cross country trips are fun to do and eventually the new pilot will want to fly beyond his home base alone. For that, as with all phases of flying, safety lines in education and preparation.

For navigating, the student should know how to read a sectional chart, which is a pilot’s map. Also he should have a good understanding of meteorology.

Weather can change rapidly and basic knowledge of various cloud types and of the weather they foretell is to the pilot’s advantage, as is knowing how and where to obtain additional weather information tor his intended route and destination.

All this, along with a thorough understanding of requirements for weather visibility for VFR (visual flight rules) and an understanding of altitudes (yes, the FAA has much to say on how high or how low one may fly) are some of the things the student pilot should have knowledge of before he leaves his own area.

Then, to be legal to fly cross country alone means, he first must have flown the trip with a certified flight instructor, whose responsibility is to ascertain that the student can plan the trip, estimate fuel requirements, time en-route, gather all pertinent information, plan alternatives in case the trip cannot be completed as planned, then actually find his way there and back home again.

Really those requirements aren’t that bad. It sure beats just heading out, getting lost, busting controlled airspace and running out of fuel, all because of not being prepared, and believe me it happens all too often.

Most of the FAR’s are easy enough to live with, and all are meant to make living as safe as possible for everyone, from student pilot, to the non flying public. I would recommend to every new pilot that he obtain a copy of the FARs (Federal Aviation Regulations), and become familiar with part 61, which deals with pilot certification and part 91, which deals with general operating rules. FAR’s are available for a small charge at most airport FBCVs and pilot supply shops.

All this may sound like a royal pain in the posterior to the eager new pilot who just wants to fly, but it really isn’t so difficult to obtain the safety formula knowledge and attain the flying proficiency to become a safe knowledgeable pilot. Believe it or not, the hardest part is just getting started at it, once into the studying, learning becomes fun. The result is worth the effort.

Article Name
Understanding The Safety Formula
Description
To a student pilot, the solo is the high point in his flight training - and is usually taken early before learning the safety formula required for safe and competent flight.
Author
MARION SPRINGER
SHARE TWEET PIN SHARE

Be the first to comment on "Understanding The Safety Formula"