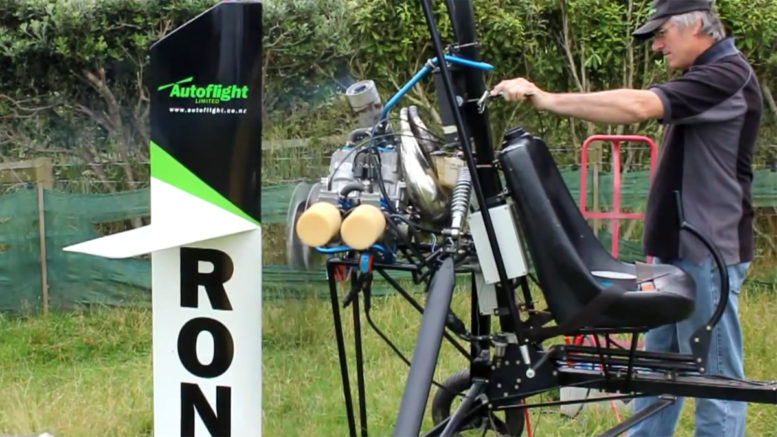 Back in the 1960s, one of the trendiest cars to own was the Saab. It was cute, practical, and plenty powerful. It was also powered by a two-stroke engine, a motor which every other major car manufacturer in the world had given up on years earlier.

Although the Saab was a good car, you don’t find any two-stroke-powered automobiles selling anywhere in the world today. Why not? Because two-stroke engines are noisy, inefficient, and polluting, characteristics which are not likely to win them endorsement from the Sierra Club any time soon. 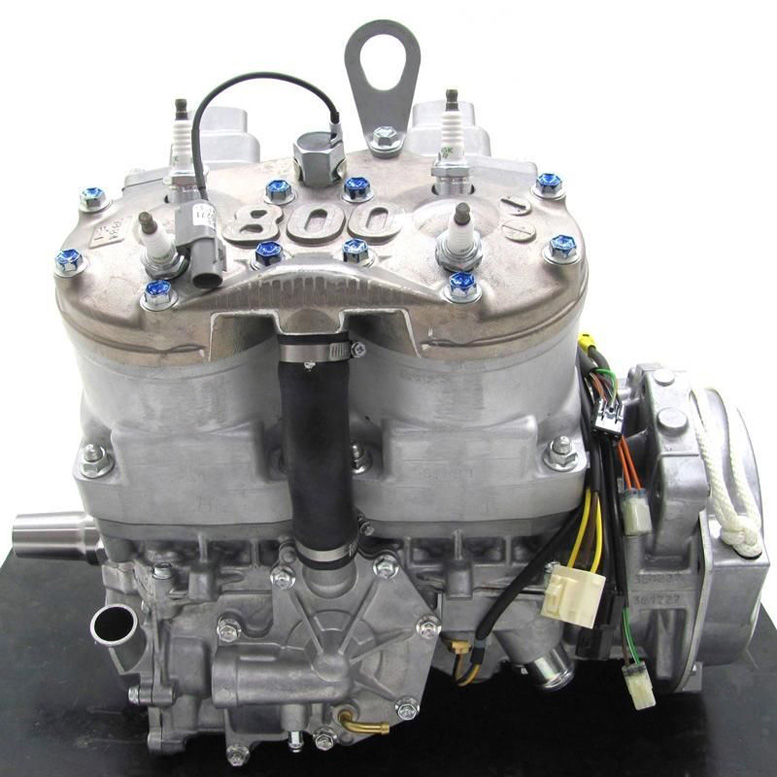 One of the most advanced two stroke engines of today incorporating all that modern technology can offer giving this Artic Cat engine previously un-heard of two-stroke reliability – see Mosquito Helicopters for more information.

But by the late 1960s, the political reality of the need to clean up air pollution forced the end of the two-stroke engine as a satisfactory choice for car manufacturers.

Because federal and state fuel economy and fuel regulations have been getting more stringent every year, and because the various and ongoing oil crises of the last 20 years have increased oil prices to the point where consumers actually care about their car’s gas mileage, the lid of the two-stroke engine’s coffin has been nailed shut. Or so everyone thought! 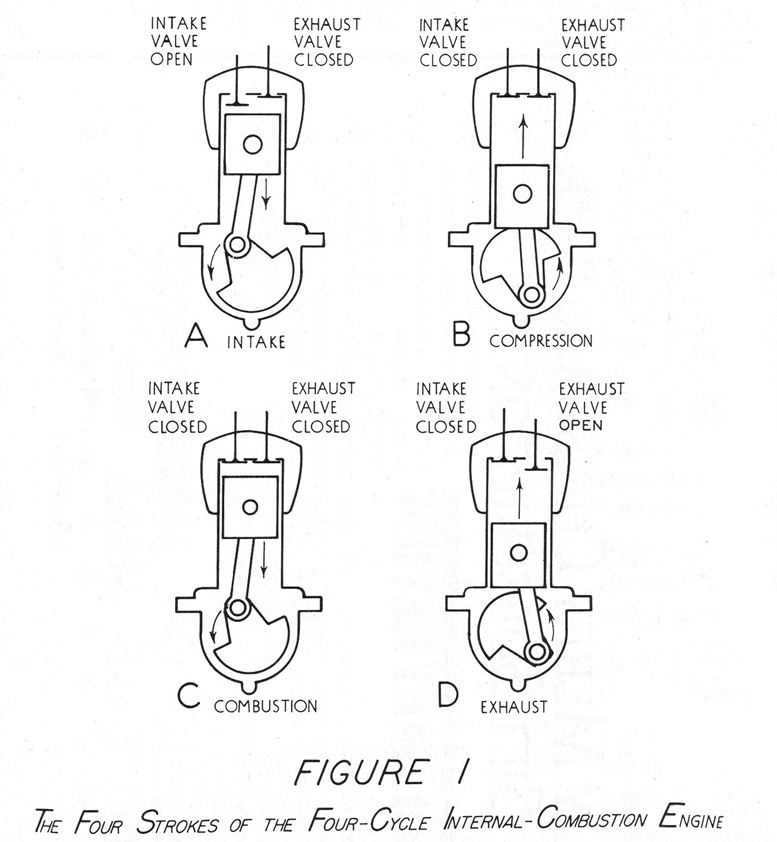 The four-stroke engine, on the other hand, while being considerably more difficult and expensive to build and maintain, is much more efficient.

In the 1980s, the growth of the ultralight and homebuilt aircraft industries brought about a rebirth of sorts for the two-stroke engine. Because these engines were light and powerful for their size, manufacturers and homebuilders of aircraft started adopting them for use on their lightplanes with excellent results.

The two-stroke engine proved itself to be reliable and efficient in powering these light-planes, and because ultralights and the engines which powered them were exempt from many government regulations covering conventional aircraft, they were a perfect choice for the application.

As homebuilt designs became larger and heavier, however, many designers began opting for conventional four-stroke aircraft engines or modified four-stroke automobile engines, hoping for greater power and reliability. As the average price for a homebuilt aircraft kit has gone up, the trend toward four-stroke powerplants, rather than reversing itself, has intensified.

As of this writing, some kit manufacturers who had previously designed their planes exclusively for two-stroke Rotax engines have installed conventional, certified aircraft engines instead, citing improved consumer acceptance, greater efficiency and real power, and longer engine life. Although these claims remain controversial, the trend is undeniable.

The general opinion in homebuilding circles seems to be more and more that two-stroke engines have their place in low-power, recreational applications and are out of their element in high-performance or cross-country aircraft.

Considering recent developments in two-stroke technology, however, that may not be the case for long. A feature story in the Los Angeles Times recently outlined the development of a new two-stroke engine by a company headed by Australian inventor and designer Ralph Sarich.

According to the Times story, Sarich had been working on improvements on rotary engine design when he chanced upon a startling discovery. He had been working on a technique which used compressed air to blow a fine mist of fuel into the combustion chamber of the cylinder.

He was having mixed results with the Wankel when he tried the technique on a two-stroke engine. The results of that trial, however, were nothing short of sensational and he and his team continued to improve the design.

The improvements have been so promising that the same major auto makers around the world who had discarded two-stroke technology as outdated and useless for their purposes, have begun their own tests on the engine under license to Sarich’s company, Orbital Engine.

So why are auto makers so interested now? Well, as nearly every ultralight pilot and builder knows, two-stroke engines are significantly smaller in profile and lighter than conventional four-stroke powerplants, key considerations in light of ever-increasing government regulations on fuel economy.

Lighter, more aerodynamically efficient designs mean more fuel efficient and powerful cars. But at what price? In addition to fuel economy, today’s auto makers, in light of
the governments’ ever stricter standards on air pollution, need to be increasingly aware of their products’ emissions. 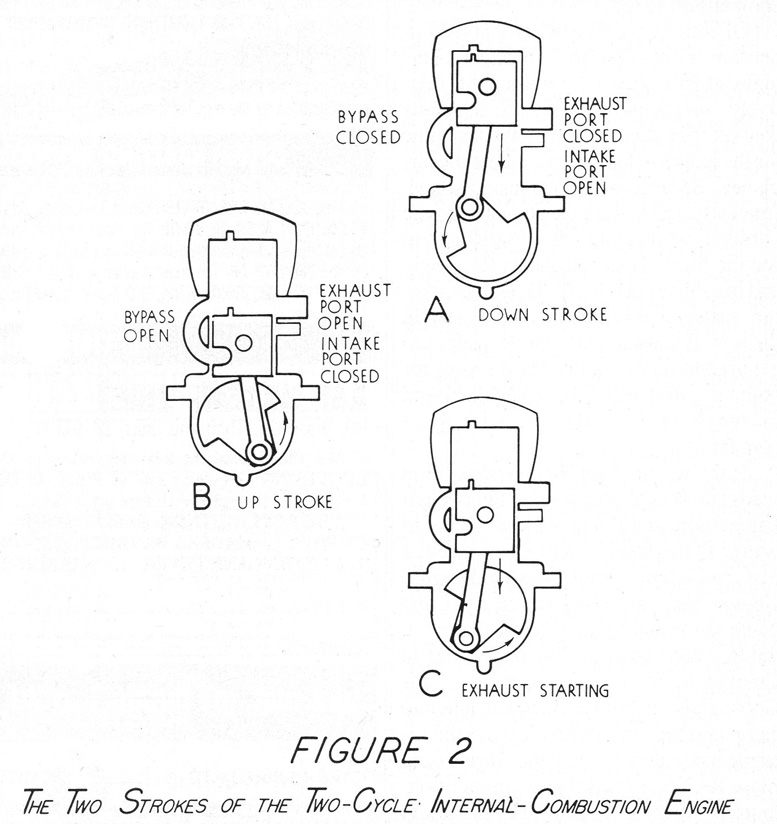 Typical two-stroke engine which powers the vast majority of ultralight and very light planes the world over.

Considering this problem, how can car manufacturers even be considering the relatively dirty two-stroke engines?

The answer: Sarich’s innovative design approach. Conventionally designed two-stroke engines use a mixture of air and fuel for power, with liberal amounts of oil mixed in for lubrication. The result, even with the advent of fuel injection, has always been a rather inefficient mix of elements, resulting in unacceptably high levels of exhaust pollutants.

The new two-stroke engine as developed by Sarich, however, develops its own compressed air to blow a mist of fuel and air, along with a small amount of oil, into the engine’s compression chamber after the exhaust and intake ports have been closed.

Because the carefully measured spray of oil is nearly completely burned in the process, and because both ports are closed by the time compression takes place, two potentially problematic sources of emissions are, if not completely eliminated, drastically reduced.

The resulting two-stroke process is a tremendous improvement over that of similar traditional designs. Skeptical? So were we, that is until we read of a test which Sarich’s company conducted recently.

They installed a three-cylinder, two-stroke engine in a current Japanese production car and achieved some eye-opening results. The fuel economy of the test car, according to the Tunes story, improved by over 25 percent, while its acceleration performance increased 30 percent.

Auto makers still need to determine if the two-stoke engine can be made to meet emission standards for nitrogen oxide, a big “if” as the compressed air used for fuel mixing creates an unusually oxygen-rich atmosphere, causing high N02 levels upon burning.

They also need to come up with a way to make the noisy two-stroke engine run more quietly. Some manufacturers have been experimenting with superchargers, long accepted in aviation circles, to achieve a quieter running motor while boosting power. 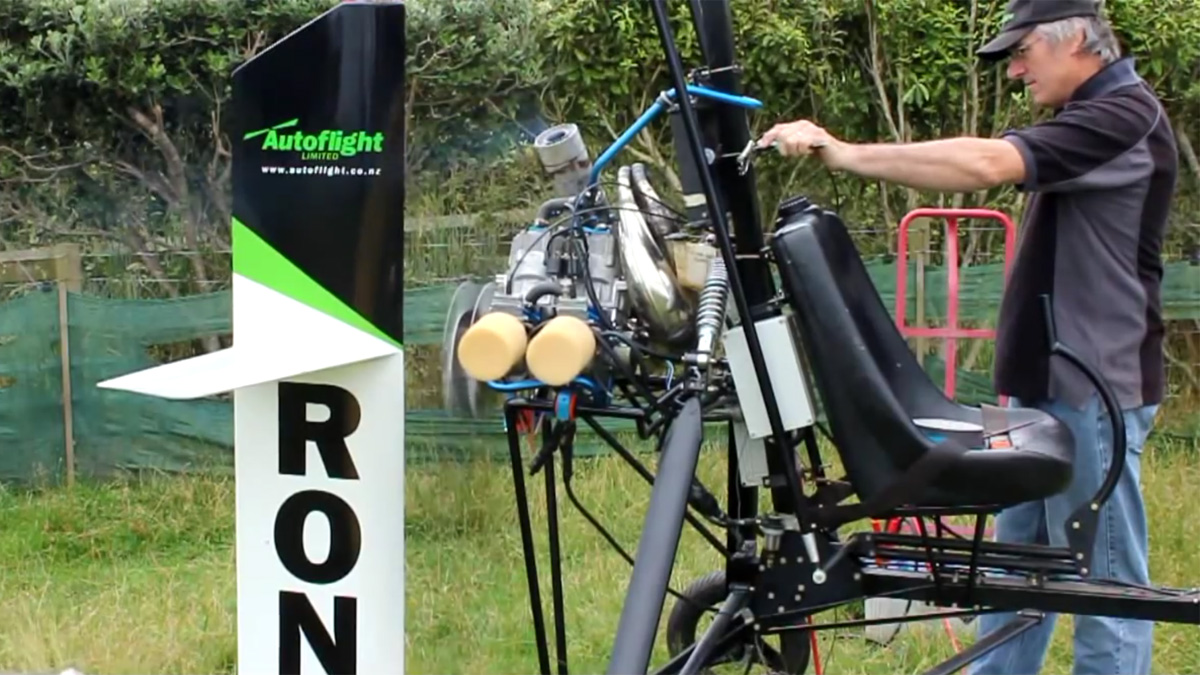 Article Name
Two-Stoke Engine Powerplant Of The Future
Description
Four stoke engines have dominated the aircraft scene for some time now, particularly in certified aircraft. But will the two-stroke engines rocky start in experimental aircraft find a way to be the leader of the pack?
Author
Mike Glair
SHARE TWEET PIN SHARE